A Rainbow in a Snowstorm 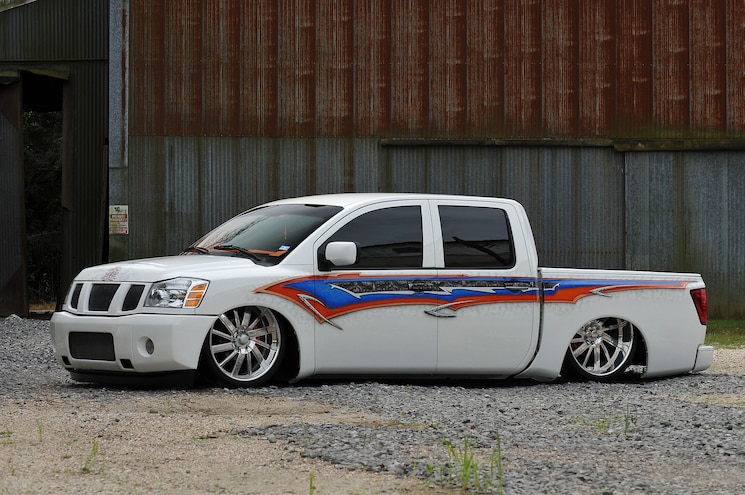 By definition, a blizzard is a severe snowstorm lasting for a prolonged period of time. The core difference between a snowstorm and a blizzard is the strength of wind. Ricardo Olvera likens his 2006 Nissan Titan to a blizzard in that it comes quickly and has the ability to cause damage in the wake of it passing. Ricardo entered the truck scene in a 2005 Chevy Colorado and quickly lowered it to get it show ready. During his first big show, Ricardo realized that there was nothing but Ford's and Chevy's at every corner. Ricardo had bigger dreams of something different. 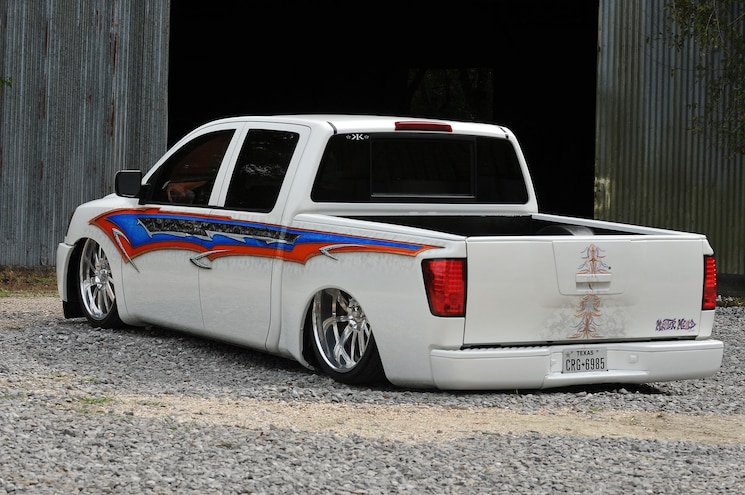 View Photo Gallery | 19 Photos
Photo 2/19   |   2006 Nissan Titan Blizzard Rear 3q
After trading his truck in the following year, he rolled out of the dealership with a brand new 2006 Nissan Titan and the challenge began. As a Nissan, there were fewer standard options available as the more popular Chevy trucks so Ricardo had to work in sections. "The very first thing I did was performance," Ricardo tells Truckin, "I added a Flowmaster exhaust and a cold-air intake." The next step was lowering the fullsize F-Alpha platform by way of a Belltech lowering kit. As most truck enthusiasts are aware, lowering never gets the job done, so Ricardo enlisted his good friend Roger Jimenez to lay the Nissan to the ground. Roger had actually never officially 'bagged a truck so Ricardo had his doubts. 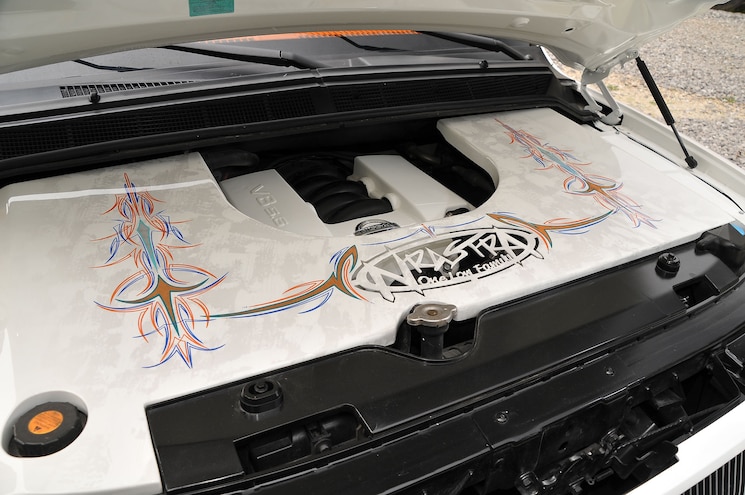 View Photo Gallery | 19 Photos
Photo 3/19   |   2006 Nissan Titan Blizzard Engine Bay
At that time, he met his now wife, Xochiti, who kept his motivation going and encouraged him to keep his dream alive. After a few months, Ricardo showed back up at Roger's house to find the Nissan Titan'bagged flawlessly. Ricardo's next step was to change the exterior to replicate the top trucks in Texas. He had his friend Chaz Hubbert draw up a rendering that he took to Cold Flames Custom of Pasadena to turn the drawing into a reality. During the next year, Ricardo got more ideas on what he wanted for paint. In 2013, Ricardo met Czar at Mastermind Design and they had some great ideas for new paint schemes, but Ricardo was strapped for cash. He decided to part ways with his Raceline wheels to finance an even more grandiose paint style. Czar went wild once he had control of the truck, adding a plethora of House of Kolor blends along with wild graphics and airbrush perfection.
After saving up additional money, Ricardo ordered a set of brand-new Raceline Challenger wheels to add to the Titan. With only the interior left, Ricardo began his search for upholstery shops. He had a vision of a bright orange cabin, but shop after shop kept telling him it wouldn't look good. One shop, Mark's Upholstery in Pasadena, accepted the job. Before they started cutting and preparing, Ricardo was called one last time and asked, "Are you sure you want this color?" Ricardo insisted he wanted every panel in the truck wrapped front to back in Keystone Calypso Papaya vinyl. The only thing that isn't orange inside the Titan is the white stitching holding the seats together. 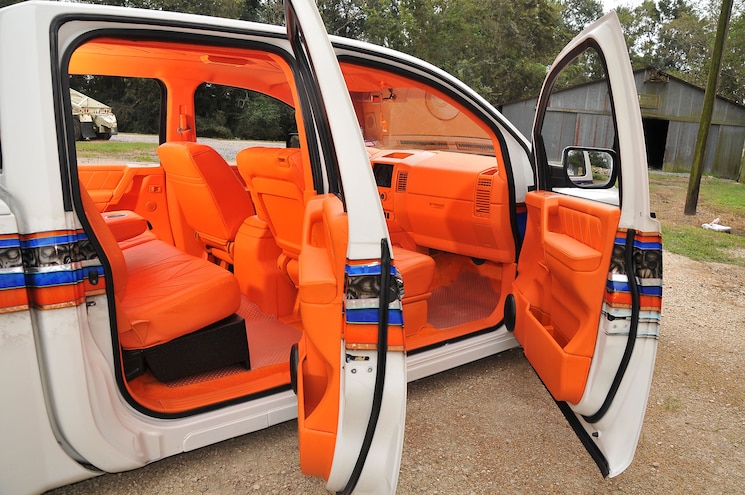 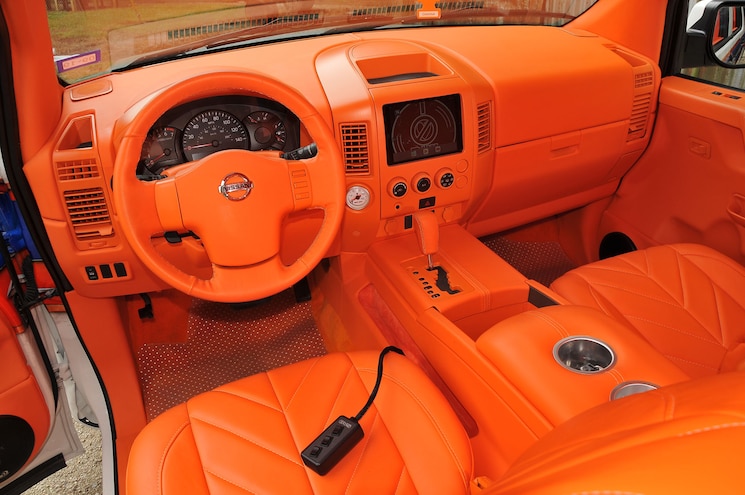 View Photo Gallery | 19 Photos
Photo 5/19   |   2006 Nissan Titan Blizzard Interior Dash
Ricardo says that his friends still make fun of the bright orange interior, but it's what he envisioned and what he loves about his Titan. The last step on the Nissan was adding sounds that matched the flashy style already created. He ordered an iPad mini kit from Soundman Inc. and took the kit and dash to his brother Daniel Olvera to fabricate the two pieces into one and make it flush into the dashboard. Mauricio, at Mauricio's Collision, put it all back together with perfection. Now that the iPad mini head unit was mounted, it was time for the big sounds. Massive Audio MX65 components were added to all the doors and two Massive Audio 10-inch subwoofers were built into a down-fire box under the rear seats.
Ricardo wishes to thank his wife, Xochit,i and his three amazing stepchildren for all their support throughout the process. It didn't come easy with some shops not doing what they said they would, but his perseverance throughout and his family's continued motivation guaranteed that Blizzard would come out as successful as he imagined. Now when the Blizzard comes through a show, it separates the seas of Chevy and Ford and stands out among the crowd. 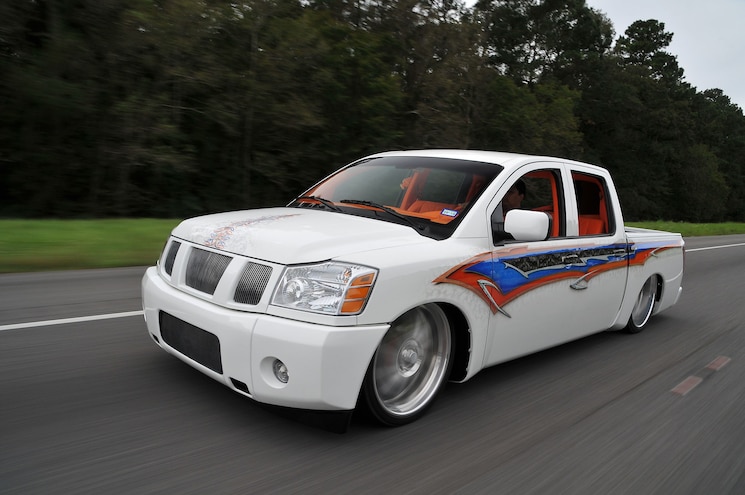