Proud to Call It a First Build 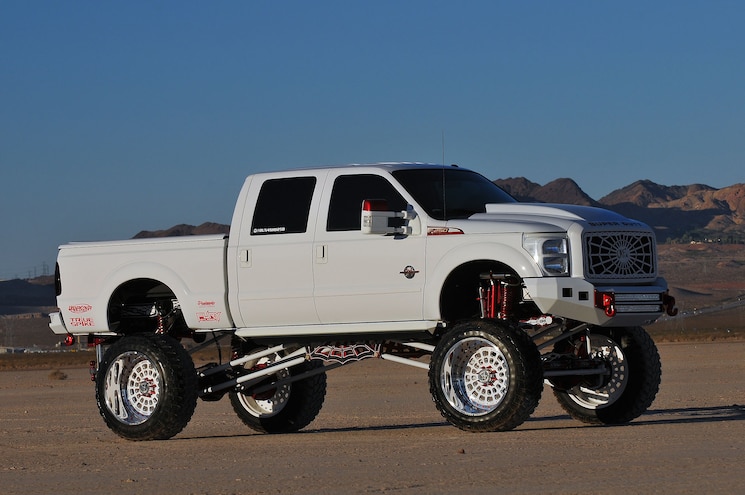 Most people that build a truck of this high caliber have had past experiences with custom trucks and companies prior to their build. Gary Brewer and his wife, Molly, own a daycare business in Zephyrhills, Florida, just outside of Orlando and have never completed a truck build anything like this. Originally, Gary grew up in New Jersey and his parents divorced when he was six years old. As a mechanic, his father worked long hours and Gary constantly tried to impress him with schoolwork and eventually his car knowledge.
Along with his family, Gary made the move to Central Florida, and it wasn't long before he started searching for something to get attention on the Florida streets. In 2011, he met and fell in love with Molly and got married two years later. "Molly embraced my interest in getting something that would turn heads," Gary tells Truckin, "I'm not sure she knew I would take it this far." In 2016, he walked into a Ford dealership and purchased a brand-new Ford F-250 diesel truck. 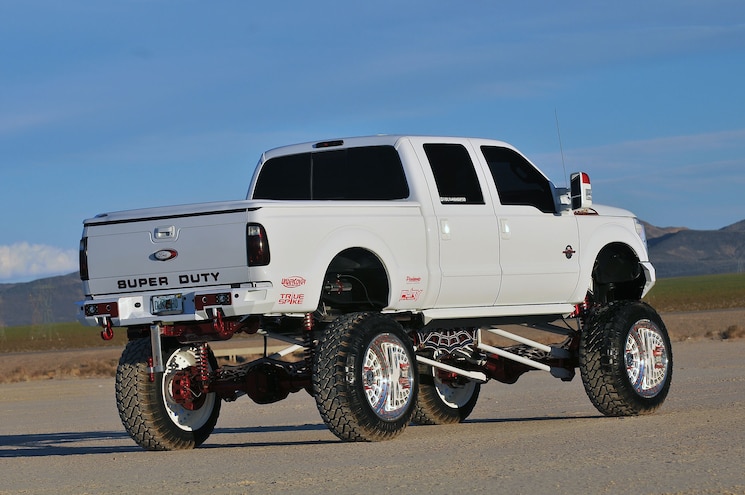 View Photo Gallery | 24 Photos
Photo 2/24   |   2016 Ford F250 Dun4sho Rear 3q
It started modestly because Gary had no experience with this culture. An 8-inch lift was added and then it was upgraded to a 10-inch lift before again being upgraded to a 14-inch lift. He just couldn't get happy with his new truck. He brought his Ford to a truck show in Daytona Beach where he thought his truck would be the talk of the show and was blown away by all the custom builds. "My truck actually looked tiny compared to all these other lifted trucks," Gary adds, "I noticed all these trucks had one similar connection and that was who built them." The company that seemed to handle the impressive builds in Florida was Plan B Fab in Orlando.
The next day, Gary contacted Rob Pique, the owner of Plan B, and set up an appointment. Molly took out a paper and pencil and started drawing out a design that she liked that had a spider web-based theme to it. At their appointed meeting, Molly showed the drawing to Rob and he said he could work with that. Gary dropped his new truck off where a new custom suspension was fabricated. Everything was removed from the Ford and Rob worked his magic adding custom bumpers, grilles and lift making sure that Molly's web design was incorporated. 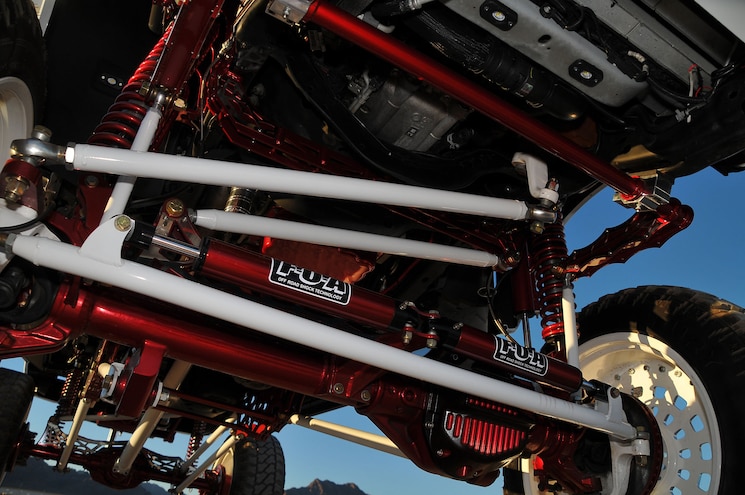 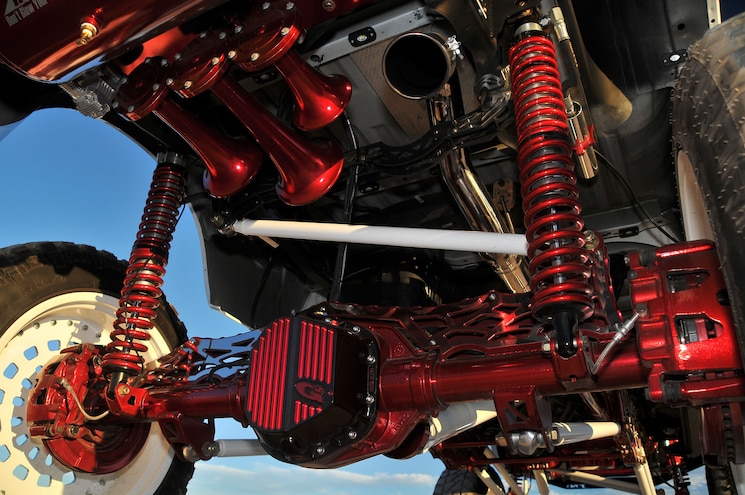 View Photo Gallery | 24 Photos
Photo 4/24   |   2016 Ford F250 Dun4sho Rear Suspension
American Force was contacted to see if they could match the web theme and they came through with a set of 26-inch Phobias that matched perfectly. Once the truck was brought out of Plan B, it needed some attention in the cabin. Based on a recommendation from Rob, Gary brought his seats to Carlos at Highline Motors where the seats were wrapped and designed with diamond stitch. JB Customs was next to help by color-matching all the plastic pieces on the dash and doors.
In order to make the Ford F-250 a little more peppy, TwinDiesel Performance in Lakeland did their work under the hood by adding a K&N cold-air intake along with an EGR delete, SCT Programmer with custom tunes by Pela Motorsports. The oil pan, tranny pan, and the underside of the F-250 was powdercoated on the truck by Mike Kent Jr. from Sorrento. Every bit of the factory lighting was switched over to LED for better visuals while rolling. 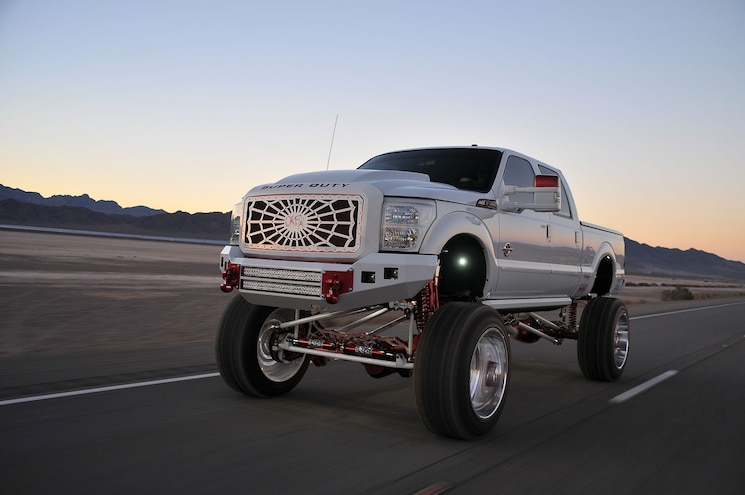 View Photo Gallery | 24 Photos
Photo 5/24   |   2016 Ford F250 Dun4sho Drive
Once completed, Gary again returned to that same Daytona show and finally made that impression he dreamed about. His first custom build was a huge success and got a feature spot in Las Vegas in the American Force booth. It took many years, but once his father got his first look at Gary's creation, he was floored by the creativity and told him how proud he was of him. Gary wishes to thank his beautiful and supportive wife, Molly, for always standing by him and being involved even more than most truck owners are. Dun4Sho was created for one reason—exceed all levels and prove that he could do something of which he'd be proud. 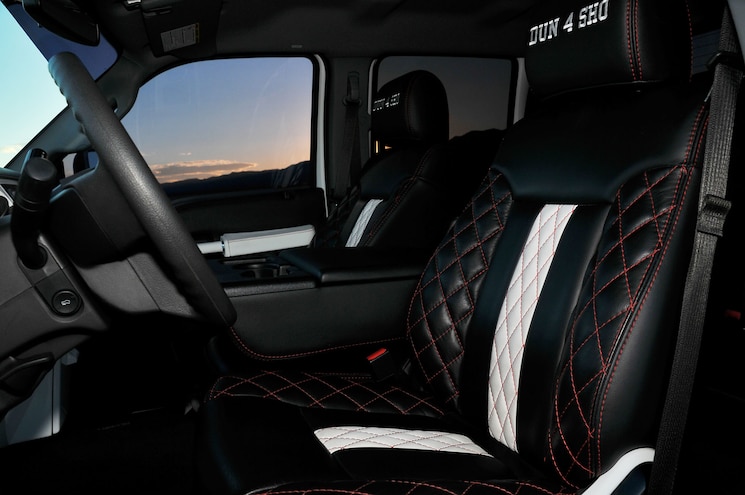