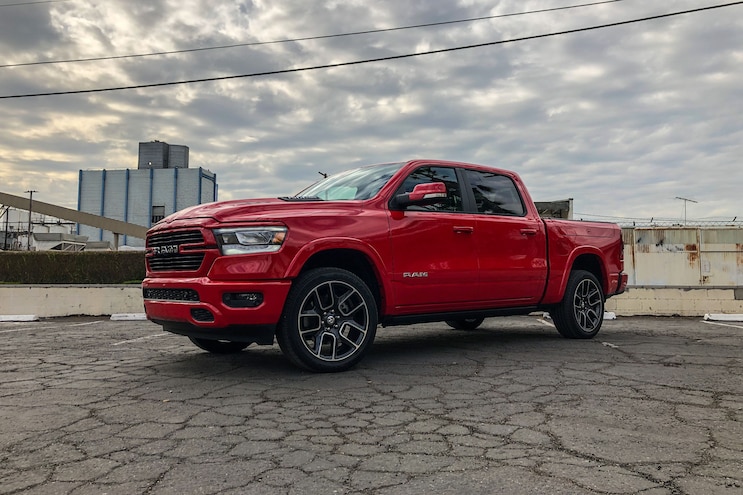 Ram rocked the pickup world when it introduced us to the all-new 2019 1500. This truck was fresh from the ground up, sporting a reworked frame, new cab structure, fabulous interior, and fresh drivetrain options. Initial drive reviews were glowing, and Ram quickly acquired nearly every award and accolade in the automotive sphere, including our very own Pickup Truck of the Year trophy.
As we do with each PTOTY winner, we ordered up a 2019 Ram 1500 and inducted it into our long-term test fleet. Over the next 12 months, we'll perform a detailed evaluation on every aspect of the truck possible. When ordering our tester, we tried to stay as true to the model originally tested as possible, while adding a few popular options that weren't available at the time. What we ended up with was a Laramie Sport with every big-ticket option aside from the panoramic sunroof. Notable among these are Ram's exclusive four-corner air suspension, 22-inch wheels, 12-inch Uconnect 4C infotainment system, and the 5.7L Hemi V-8 engine with eTorque. All-in, the truck racked up a cost of $67,020. 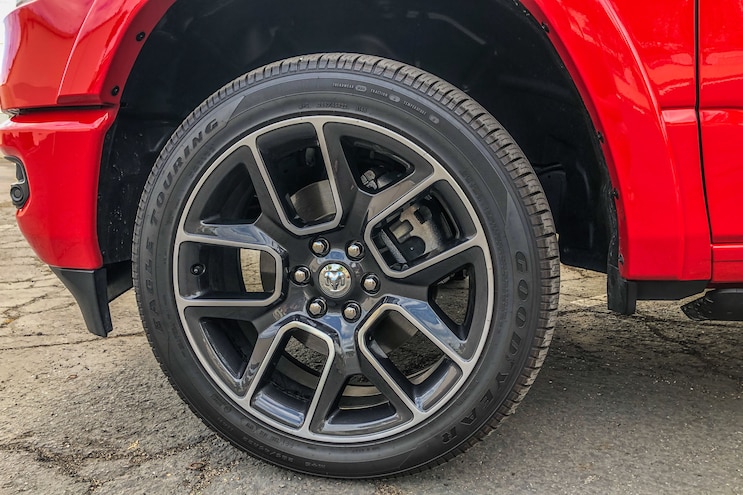 View Photo Gallery | 7 Photos
Photo 2/7   |   Ram's new 22-inch wheels look so perfect on our truck that most people don't even realize they are as big as they are. From a ride comfort standpoint, we'd like a little more sidewall, but really it's not bad.
In this first quarter, we've totaled up just north of 4,000 miles, putting us on pace to be very average at about 16,000 for the year. Thus far, the truck has been outstanding. We've had no reliability issues and only one dealer visit to perform a reflash for an airbag (safety, not suspension) recall. We are constantly getting compliments on the truck wherever we go, and we think it's due in part to the slick look of the Sport package and 22-inch wheels.
We're still enjoying the power from the 5.7L Hemi V-8 engine, and the interior is extremely quiet and comfortable. The 19-speaker Harman Kardon premium audio system impresses all who ride in the truck and the 12-inch Uconnect screen is quite the conversation starter. 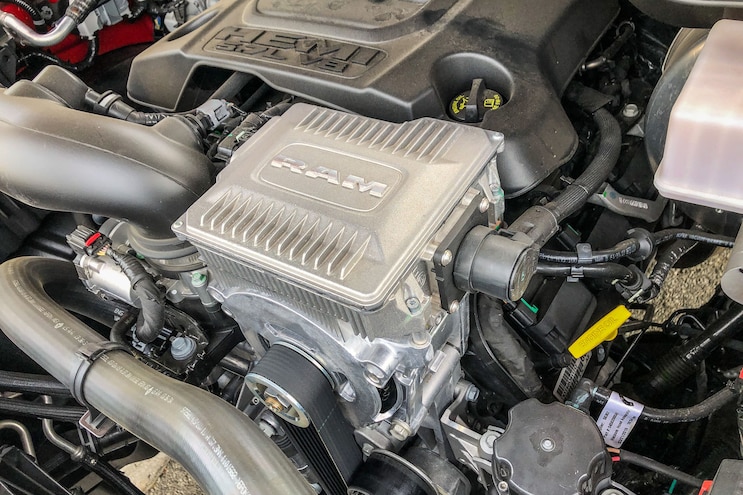 View Photo Gallery | 7 Photos
Photo 3/7   |   Mounted to our 5.7L Hemi V-8 engine is this eTorque motor/generator. Fed by a 48-volt battery pack mounted to the rear of the cab, this unit is responsible for providing up to an additional 130 lb-ft of torque off idle. It's used to activate the stop/start function, smooth shifts, and aid in cylinder deactivation function. We're still undecided if it's a useful upgrade in the real world, so stay tuned.
We've had a few small grumbles in these first months, however. Getting it out of the way first, we don't care for the shift knob. Ram is still the only pickup manufacturer to use this unconventional shifting method. Many say to just get used to it, but it's been tough. We still frequently turn the knob the wrong direction, sometimes reach for audio controls instead, and less frequently find that it automatically shifts back to park (sometimes you need to drive a few feet with a door open; this truck won't allow it).
As part of the Advanced Safety Group (a $1,695 option), our Ram came equipped with parallel and perpendicular park assist. While we've had great luck using this feature in the past and it impresses people to watch a pickup park itself, this truck has failed every time we've tried. We've had the truck back into the curb and park itself on top of the curb, and we've had to stop it short of hitting cars. So far, we've not had a single successful automatic park job.

View Photo Gallery | 7 Photos
Photo 4/7   |   The truck's Flame Red exterior paint color really does a great job of screaming "Hey, look at me!" everywhere you go.
Another option we've taken issue with that Ram selected for us is the power running boards. We initially opted to not have the power running boards installed for the simple fact that with air suspension, the truck can be lowered to an entry/exit height and they aren't needed. When the truck arrived with them we knew they wouldn't be super useful, but we didn't anticipate issues. While still minor quibbles, we've noticed the steps are sometimes slow to deploy (we step on them when they are still lowering) and even slower to retract. We often hear them retract into place minutes after we've driven off. And with the air suspension at normal height, the steps tend to contact curbs. The steps can be turned off in the vehicle settings, so we'll see if we get to that point anytime soon. 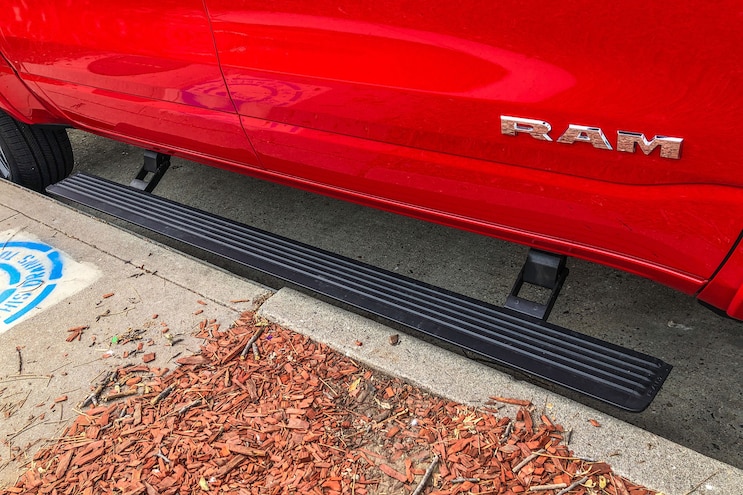 View Photo Gallery | 7 Photos
Photo 5/7   |   Maybe it's just the curbs we park next to, but we've had the running boards hit on multiple occasions. And if they don't hit on deployment, they often do when stepped on. We've nearly pinched our toes underneath them as well.
Our final grievance from the first 4,000 miles centers around the truck's small fuel tank and seemingly poor fuel economy. While the truck is rated at 17 mpg city, 22 highway, and 19 combined by the EPA, we've seen nothing even close. Our best tank thus far averaged just 17.05 mpg, a fair bit off of the 22-mpg highway rating, and we've seen an average of 14.85 mpg. We suspect this has the most to do with the truck's optional 3.90:1 axle gearing. While great for power off the line and towing, the standard 3.21:1 axle ratio would get us closer to the EPA rating. We also didn't opt for the larger fuel tank, meaning that when completely empty we haven't filled more than 22 gallons. This gives a range between fill-ups of about 275 to 325 miles.
So far, we're happy with the performance of our 2019 Ram 1500. Annoyances have been relatively minor, and we haven't had any major issues so to speak. We're certainly looking forward to the next nine months. 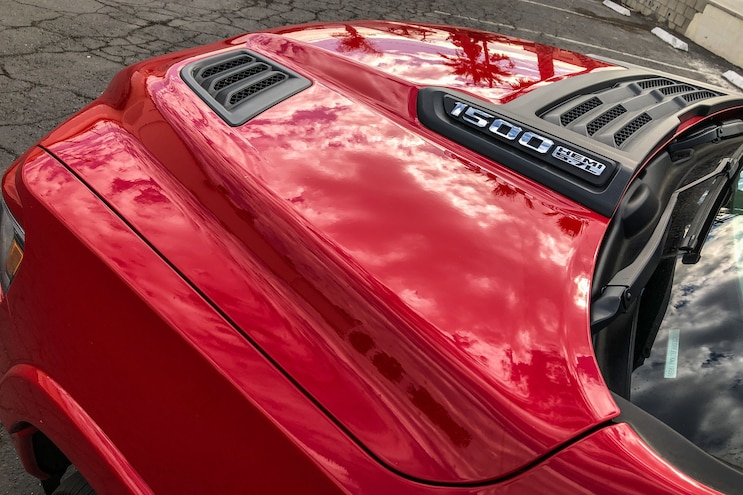 View Photo Gallery | 7 Photos
Photo 6/7   |   Adding the Sport package to the Laramie trim brings with it the same power-dome-style hood the Rebel gets. This really sets the truck apart from the crowd. 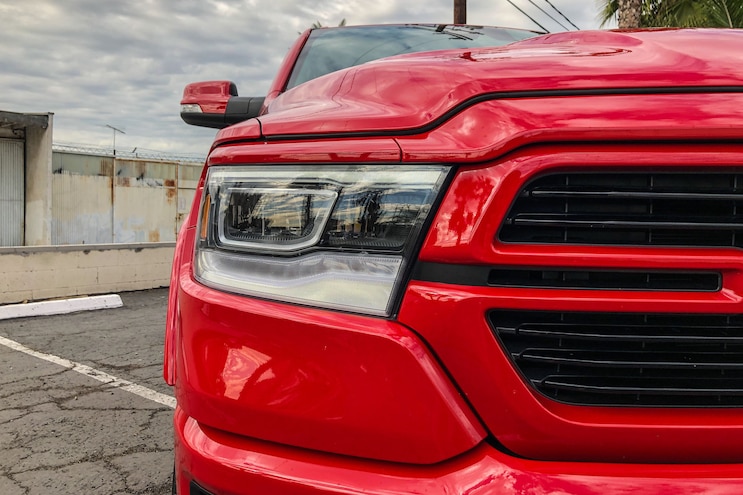 View Photo Gallery | 7 Photos
Photo 7/7   |   The Sport package also adds LED front headlamps with LED signature running lights. We love the style but wish we could get the adaptive headlamps that come on Limited models on the Laramie.
Report: 1 of 4
Previous reports: N/A
Base price: $46,140
Price as tested: $67,020
Long-Term Numbers
Miles to date: 4,158.80
Miles since last report: N/A
Average mpg (this report): 14.85
Test best tank (mpg): 17.05
Test worst tank (mpg): 10.88
Maintenance
This period: None
Problem areas: None
Logbook Quotes
"Everywhere we go, someone compliments the truck!"
"Just had someone say 'Wow, that is the brightest red I've ever seen. '"
"Did the side step just retract? We're half a block from home already!"
"Slowly getting used to the stop/start function but what's the point of eTorque again?"