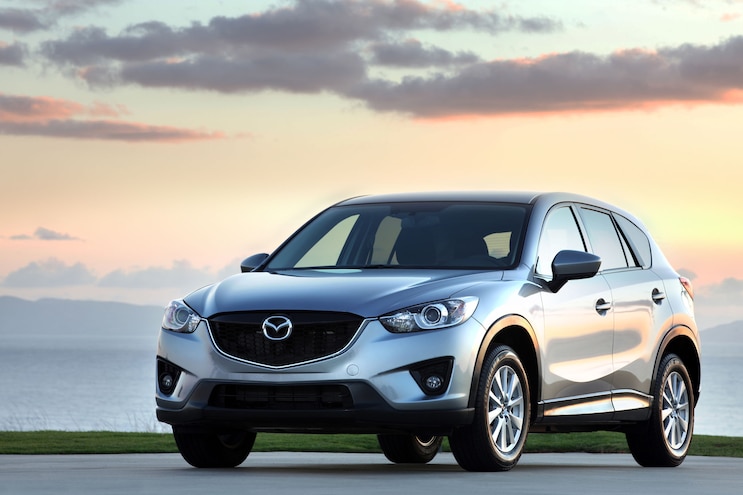 The Mazda CX-5 is far and away the company's best-selling vehicle. It seems as though making a compact crossover is one of the easiest paths to great riches, since there's an almost insatiable demand. But the CX-5 deserves its success, because it's one of the finer examples of the class.
Between the model years of 2013 and 2016, the CX-5 was in its first generation. It took over from the Mazda Tribute, a joint operation with Ford that also brought the first- and second-generation Escape. Throughout this time and up to now, the compact crossover class has been dominated by the Honda CR-V and Toyota RAV4. They both have an uncanny ability to score quite well in most major areas but never really impress at one aspect in particular. The CX-5 does better. 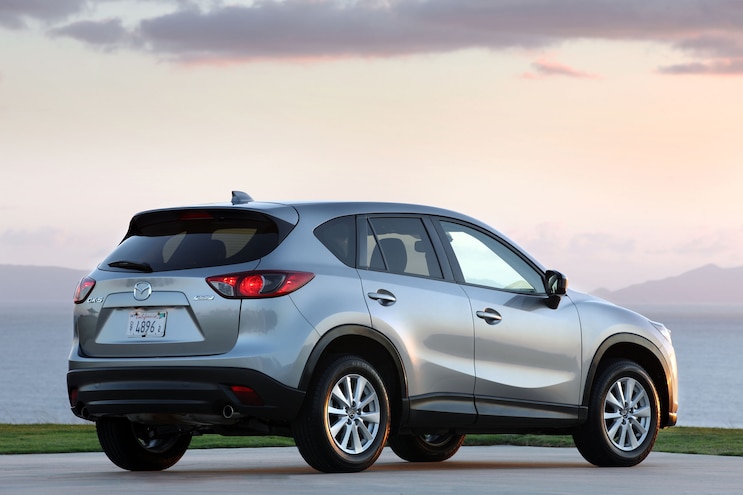 View Photo Gallery | 4 Photos
Photo 2/4   |   2015 Mazda Cx 5 R3q Silver
People who actually like driving will connect with the CX-5 in a way they never could in the tepid-by-comparison CR-V and RAV4. There's a poise and precision that doesn't come at the expense of comfort. Yet it still has the build quality and reliability all Japanese marques enjoy, while bringing plenty of practicality to the mix.
Occupant space is generous for both seating rows, including 39.3 inches of rear legroom. Cargo space behind the rear seats is 34.1 cubic feet, which expands to 65.4 when they're folded down (virtually flat). The entry-level Sport trim has rear seats that split and fold in a 60/40 manner, but the higher trims enjoy a 40/20/40 arrangement, which is more versatile.
Bearable fuel economy without having to add turbochargers or hybrid hardware is another plus. At its launch, the CX-5 came with a 2.0L four-cylinder engine making 155 hp and 150 lb-ft of torque. Average consumption is estimated at 29 mpg for the front-wheel-drive model; all-wheel-drive versions still manage 28 mpg. The standard transmission is a six-speed manual in the base trim. We'll assume most people who bought a CX-5 new ordered the six-speed automatic option or received it as standard in the two higher trims. All-wheel drive was only available with the automatic transmission. 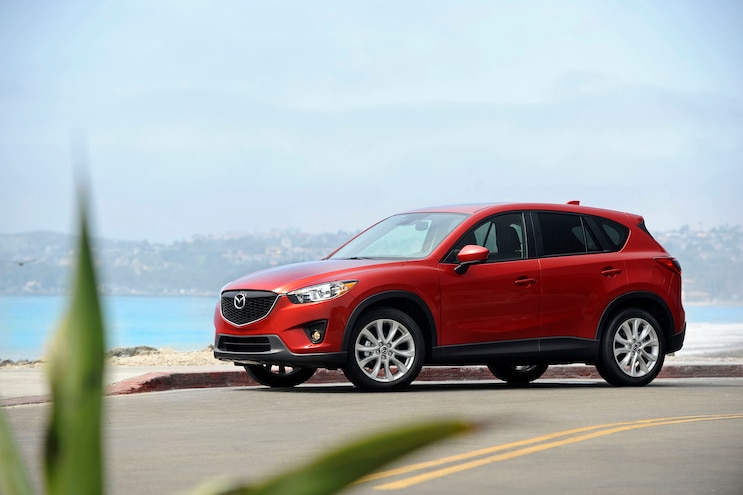 View Photo Gallery | 4 Photos
Photo 3/4   |   2015 Madza Cx 5 F3q Red
It has to be said that 155 hp is not a ton of muscle in something of the CX-5's heft, and this is where we hit a possible downside. When asked to work harder, such as during uphill stretches of freeway, engine noise becomes noticeable and there isn't much more the unit can give. That said, for running around the suburbs between work, school, home, and mall, there shouldn't be much of an issue.
However, in the second year of existence, the top two trims gained a 2.5L four-cylinder engine with 184 hp and 185 lb-ft of torque, along with the automatic transmission as standard. Average fuel consumption remained respectable at 27 mpg (front-wheel drive) or 26 mpg (all-wheel drive). The Sport trim with all-wheel drive also had this engine/transmission combination.
Standard equipment in Sport trim includes 17-inch alloy wheels, keyless entry, and a four-speaker audio system. Touring brings a six-way power-adjustable driver seat, leather-wrapped steering wheel, six-speaker audio setup, rearview camera, and blind spot monitoring. Grand Touring comes with 19-inch alloy wheels, dual-zone climate control, leather upholstery, heated front seats, eight-way power adjustment for the driver seat, rain-sensing wipers, powered moonroof, and a nine-speaker Bose audio system. 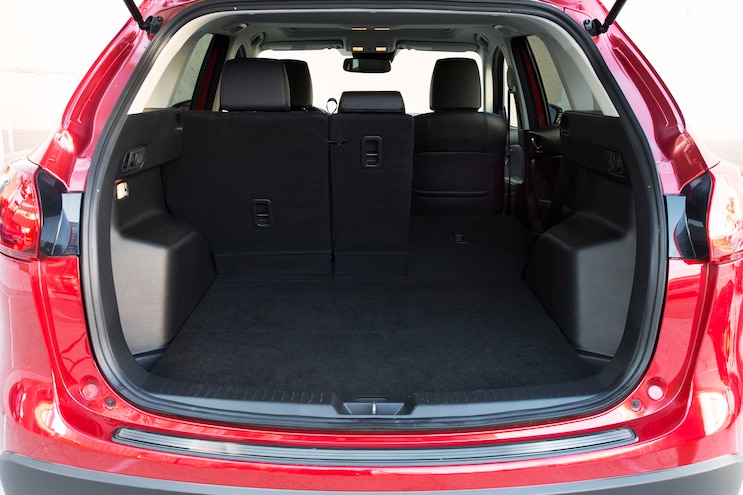 View Photo Gallery | 4 Photos
Photo 4/4   |   2015 Mazda Cx 5 Cargo Area Shot Red
People might prefer more than six airbags, but the CX-5 scored well in crash tests. Smart City Brake Support is Mazda's name for forward collision mitigation with automatic low-speed emergency braking. It was optional in this generation.
Complaints haven't been numerous, but there's inevitably a few. Some owners of the 2013 model found their engine losing power. Electrical glitches arose in the 2014 CX-5, and the new LED daytime running lights of the 2016 version had teething troubles. In general, the CX-5 has received great consumer reviews.
Official recalls include problems with the tailgate struts (all years of this generation) and a potential fuel filler pipe issue in 2014-to-2015 models. Just in case this is anyone's first pre-owned rodeo, make sure there is a comprehensive record of maintenance and have an expert independent technician give any potential purchases the once-over.
Checking the values of a 2015 Mazda CX-5 Touring with front-wheel drive (with the 2.5L engine and automatic transmission as standard) and in good condition, purchased from a private party, we're looking at $11,310. Compare that with a Honda CR-V EX at $14,984 or a Toyota RAV4 XLE for $15,008. This seems like a win-win-win. Great driving dynamics, Japanese quality, arguably attractive designs inside and out, and crossover usefulness at accessible prices.
2013-2016 Mazda CX-5
Body type: Four-door compact crossover/SUV
Drivetrain: Front engine, FWD/AWD
Airbags: Driver, front passenger, front side, rear curtain
Engine: 2.0/155hp DOHC inline-four; 2.5/184hp DOHC inline-four
Brakes, f/r: Disc, disc, ABS
Price range, whlsl/retail (KBB): $7,889/$10,224 (2013, FWD, 2.0 I-4, Sport), $16,019/$18,245 (2016, AWD, 2.5 I-4, Grand Touring)
NHTSA frontal impact rating, driver/fr pass: Five stars/five stars