BRUTALLY SEXY, When Passion and Skill Combine, Expect a Masterpiece 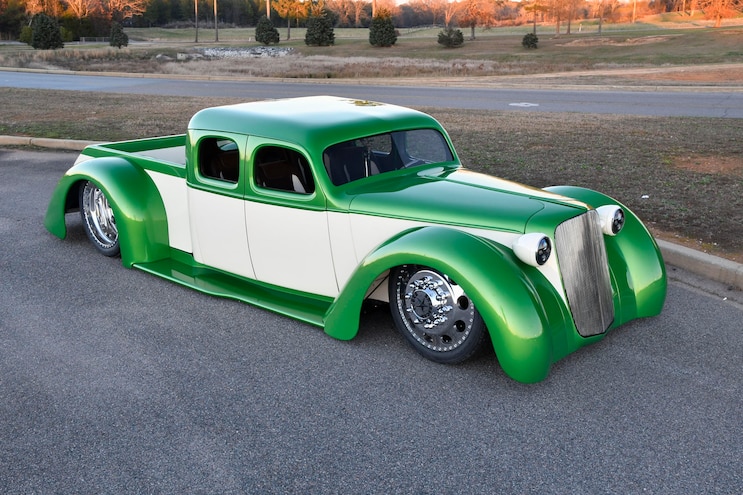 If you've ever designed a custom truck from the ground up, you know that it takes a blend of tips, tricks, and inspiration accumulated over time before your vision becomes a reality. A rendering helps refine the collection of ideas and depending on the level of complexity, the drawing can also become the perfect guide for a professional craftsman to handle the jobs you can't. When Chad Martin began dreaming of his ultimate ride, he had an advantage. Owner of Chad's Custom Dreams in Saluda, South Carolina, he has been making dreams come true for customers since 2004. With fabrication skills at every level, he didn't need to call in professional help. His legendary talents have been producing show-winning rides since the doors opened, but there was a gap in the story. He always wanted to create something genuinely unique for himself, something that no one else had. The original drawings of his cutting-edge design began back in 1999, but the build didn't start in earnest until 2016 with the find of a '36 Chevy Master Sedan. Held together with just good intentions, the rusty old shell would be transformed with a new look and new technology. It wasn't long before the rendering got the nickname "Brutally Sexy!" 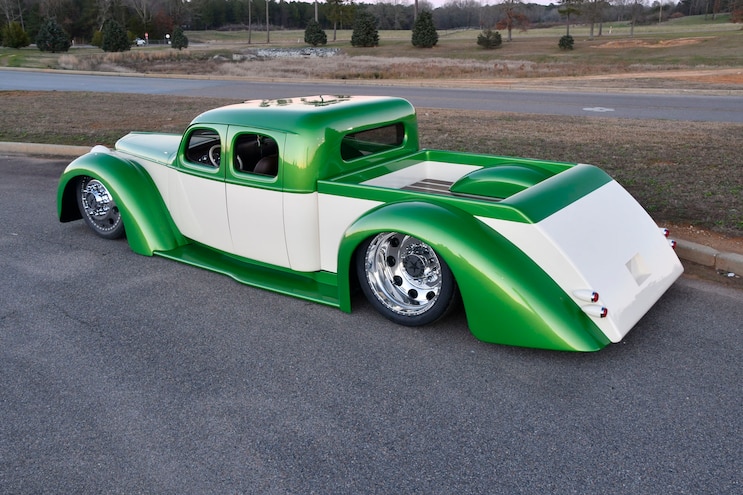 View Photo Gallery | 15 Photos
Photo 2/15   |   1936 Chevy Crew Cab Dualie Rear 3q
While the sexy portions are obvious, the brutal elements began by creating a crew cab dualie pickup based on the old Chevy sedan after it was split down the middle and widened by a foot. The rear portion was removed and replaced with the rear from a 1935 Chevy pickup, also widened to match. The huge front fenders came from a 1940 International 1-ton truck, widened and reshaped to accommodate 24-inch rims. The grille shell, made from 84 quarter-inch aluminum slats, was widened 8 inches and flanked by the original headlights. The butterfly hood from the sedan was also widened about 1 foot and lengthened 8 inches. Those swooping rear fenders began as front fenders from a 1930s Diamond-T, stretched to mate up with the hand-fabricated running boards and the all new custom bed, built from scratch using round tubing from the family's old trampoline. The bed dimensions were designed to accommodate dual 24-inch American Force Caliber Series semi rims clad in Toyo Proxies rubber. Satin-finished black walnut on the bed floor and a double set of vintage taillights fit the theme perfectly. The completed body is a stout 20-feet long, 93 inches wide at the rear fenders, and tapering to 71 inches across the front. 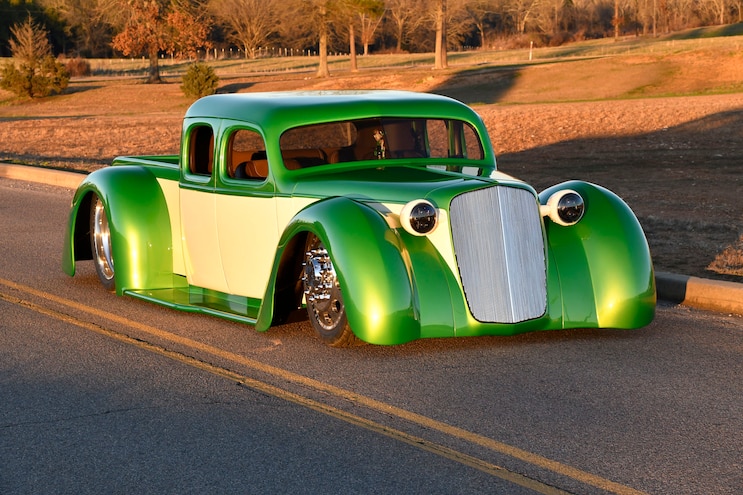 View Photo Gallery | 15 Photos
Photo 3/15   |   1936 Chevy Crew Cab Dualie
Once the body elements were in place, the next task was creating a chassis to match those outsized numbers. Chad drew the rough dimensions on the shop floor and laid out the 2x6x -inch rectangular steel tubing for the rails and crossmembers. He and master welder and fabricator Volney Smith created the first of many jigs used to square the frame and provide mounts for the body, engine, transmission, and suspension. Knowing they needed strength up front for the big new powerplant, they went to Fatman Fabrications in Mint Hill, North Carolina, choosing their Extreme Cross-Member Stage 4 IFS package. Brent (the Fatman himself) came to the shop to help solve some geometry issues so that when they dropped the front end to the ground, the tires didn't camber in like an old farm tractor. In the rear, a RideTech four-link with a custom Panhard bar holds a Dana 70 rear, narrowed 15 inches to accommodate the dual wheels. Firestone 'bags and shocks were added front and rear with an AccuAir e-Level air-ride system that raises the slammed truck to ride height when the ignition is turned on. 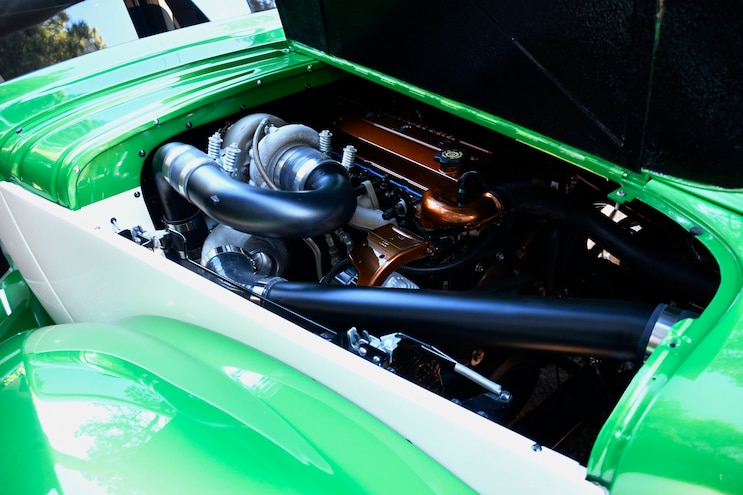 View Photo Gallery | 15 Photos
Photo 4/15   |   1936 Chevy Crew Cab Dualie Engine
Throughout the build, the sense of family was always very important, not only from their daily support, but also when it came to unusual connections like Uncle Freddie's wrecked '99 Dodge pickup. It donated its 5.9L 24-valve Cummins diesel engine and five-speed trans. Since fast-forward was always the goal, Chad had BD Diesel transform the mill into a weapons-grade bullet, complete with a twin-turbo setup that included their 58MM and 71MM turbo kit, FASS system, and a combination of headwork and stronger head bolts to handle the boost. The package pumps out an estimated 750 hp with 1500 lb-ft. Managing temps, Bell Intercoolers fabricated a new aluminum radiator and intercooler, then BJ Broxton and crew from Richards Automotive in Columbia, South Carolina, put in some late nights to get the beast wired and running. 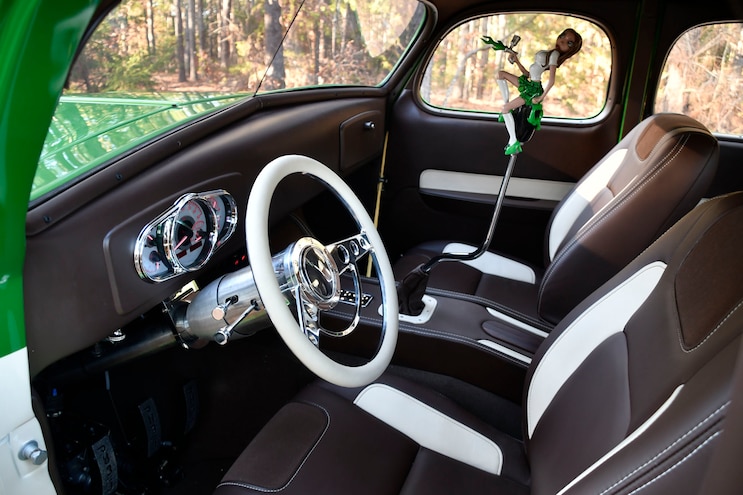 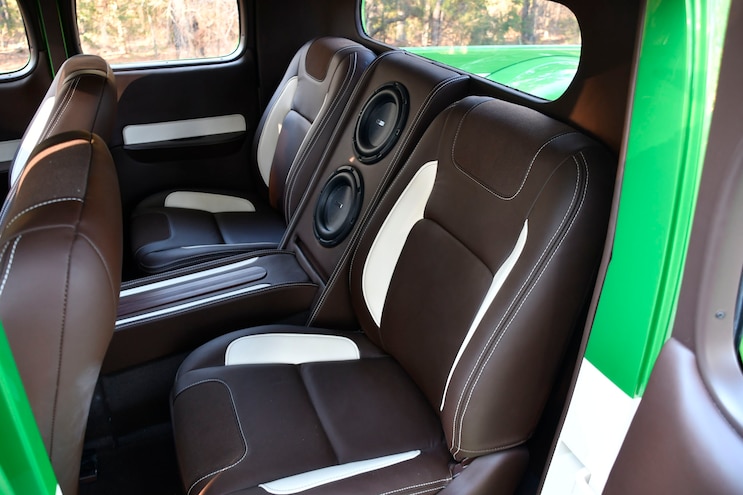 View Photo Gallery | 15 Photos
Photo 6/15   |   1936 Chevy Crew Cab Dualie Interior Back Seats
At this point, the radical body and its new chassis were finally becoming a recognizable vehicle. It was time to begin work on the interior. Four bucket seats were sourced from a Toyota Camry and seven cows gave up their hides—dyed Espresso brown by Douglass Interiors—to cover the seats, door panels, and console. The headliner is a 1936 vintage ribbed board cloth dyed a shade called Sumac and the Daytona Weave carpet was done to match by Kirks Kustom Upholstery in Corryton, Tennessee. Chad painted the dash and trim with Matrix Satin Brown adding Dakota Digital gauges for a modern touch. The Bluetooth sound system uses the music list in Chad's iPhone, playing through a pair of Diamond Audio 8-inch subs and four 6.5-inch component sets installed by Sturgess Customs in Columbia, South Carolina. A Billet Specialties wheel along with a tall Lokar shifter and door handles keep Chad in close touch. Vintage Glass smoked windows. And the Black Walnut in the center console matches the wood in the bed. That unique gear shift knob is a 3-D replica of Chad's Custom Dreams logo, created by Raven's Glide 3-D Designs.
The final step was paint and Chad is well known for his skills with a spray gun. He custom-mixed a Matrix Green Dream shade on top with five different pearls along with an Off-White accent for the bottom. The multiple-color coats were followed by several coats of Matrix AG-40 Clear with Chad saying, "It's some of the best stuff I've ever used." The engine and chassis components were painted a combination of Devils Gold Candy and Midnight Black. 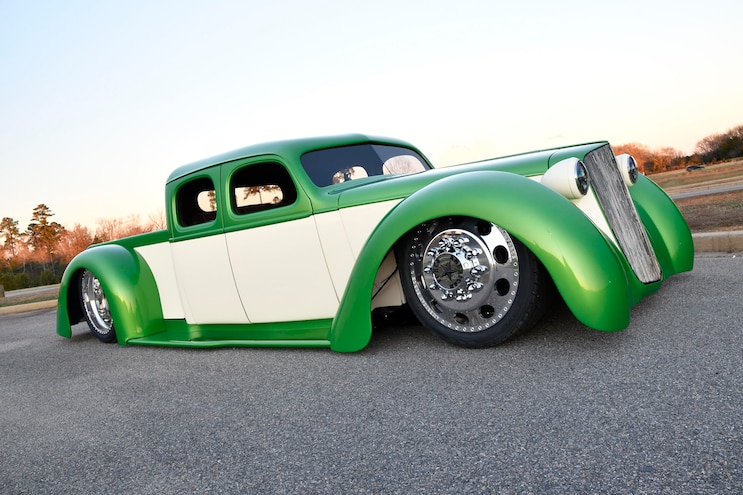 View Photo Gallery | 15 Photos
Photo 7/15   |   1936 Chevy Crew Cab Dualie 03
The road isn't easy when the goal is to arrive at the top of the podium, but when passion and skill combine, you can expect a masterpiece. The two-year effort was finished in time for the 2018 SEMA show where it was featured in the Sherwin Williams paint booth. The eye-catching truck was wonderfully received and the immediate invitations to multiple shows around the country as a headliner made all the hard work and long nights worth it. When Chad started the project, his goal was simple; "I wanted to go as big as I could and exaggerate every dimension. I didn't want anyone to guess what it was," said Chad. We think his brand-new 1936 Crew Cab dualie has met that goal and then some!