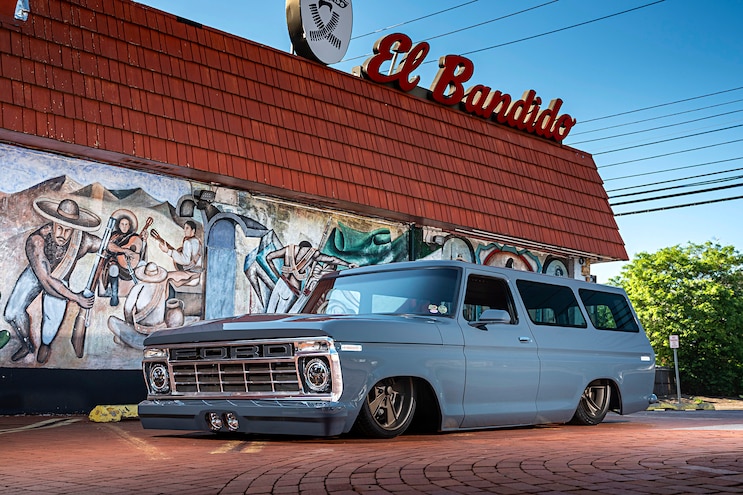 When you're young, being different than everyone else can make day-to-day life difficult. Being a child or young adult that thinks alternatively than the rest of the pack or does things outside of the 'norm' will tend to make you stand out in others views. Being different in the automotive scene results in a completely different reaction from your peers, social media followers, and the general public. Craig Piggott, along with his talented team at River City Rods & Fabrication in Davenport, Iowa are responsible for several projects over the last few years that have changed the way we think about what can be done with any old neglected truck you come across. This time, the boys in Davenport picked up a 1976 Ford B100 from KC at KC's Paint Shop in Fort Worth, Texas. Craig and KC had been joking about the build for a while and KC mentioned he wanted to build it to look like a Border Patrol truck. Originally, these trucks were built in Mexico by 13 different coach builders. They arrived at the builder with a chassis and cab from the door pillars forward but were available in many configurations with two, three, or four doors when finished. When River City got ahold of this one, the authenticity of its South-of-the-border history was still intact including all of the gauges and dash pieces being written in Spanish. What happened from there was a total transformation with ambitious design, one-off parts, and custom fabrication work to get it ready for its debut at the annual SEMA Show in Las Vegas, Nevada. 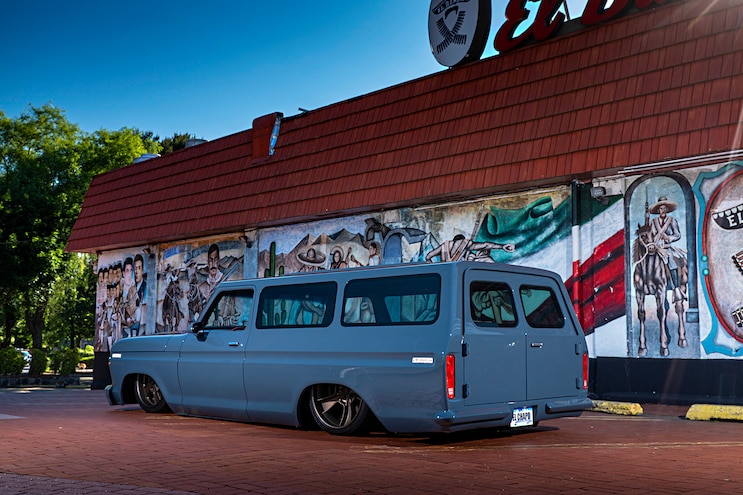 View Photo Gallery | 22 Photos
Photo 2/22   |   1976 Ford B100 El Chapo Rear
Starting with the body of this conversion truck, the river City Rods & Fabrication crew decided to completely change the overall styling by chopping the roof, flush mounting the glass and laying the windshield back ten degrees. Not all of the modifications are obvious either. There are some very subtle changes that have been made to the body and other areas of this Ford. For example, most people would never know or notice that the billet grille, which emulates a late-model Ford Raptor, started out as a half-ton chunk of aluminum and was shaved down to the 73-pound piece of functional art above the front bumper. They also built custom billet aluminum ribs down the roof for rigidity and to match the grille. When all of the body work was finished, the truck was sprayed with PPG Graphite Metallic Blue by Stoll's Auto Body. 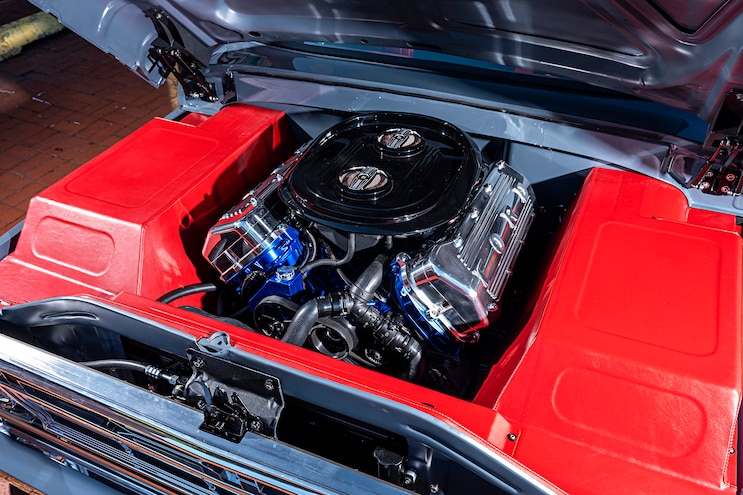 View Photo Gallery | 22 Photos
Photo 3/22   |   1976 Ford B100 El Chapo Engine
The next step was to get the chassis and the body together but the old chassis was not going back under this B100. Craig turned to Roadster Shop for one of their SPEC Series Chassis which are engineered for performance in an easy to install, user friendly package. With the addition of air bags to the chassis, the Ford could lay on the ground when the bags were empty and ride comfortably above the pavement when aired up on its 20 and 22-inch Billet Specialties Knuckle Wheels with Falken Tires. Between the frame rails resides a Coyote Engine from a 2015 Ford Mustang GT. It has been highly modified with aftermarket and custom parts including one-off valve covers meant to mimic an old 427 "Cammer" Engine. 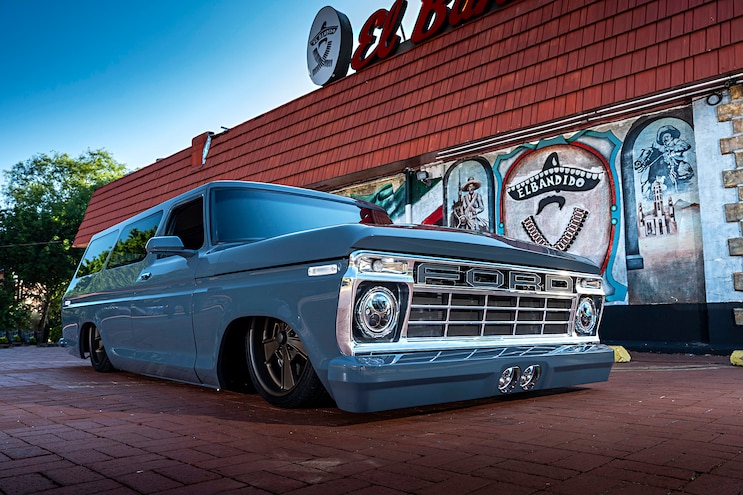 View Photo Gallery | 22 Photos
Photo 4/22   |   1976 Ford B100 El Chapo
On the inside, the crew had to make sure the interior was at a level that completed and complimented all of the other work done so far. The dash was ripped out and a new one was custom made out of steel and then fitted with Dakota Digital gauges. Below the gauges, an IDIDIT Steering Column now resides to get the B100 going in the right direction and the metal surfaces were covered in ThermoTec products for noise/heat protection before carpet was laid down. The seats were taken out of a Ford Thunderbird while the entire interior has been designed, built and wrapped by Auto Kraft Interiors in Lincoln, Nebraska 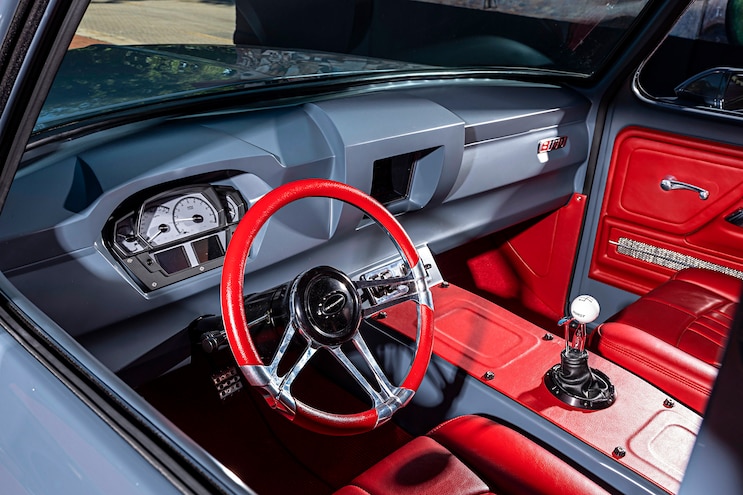 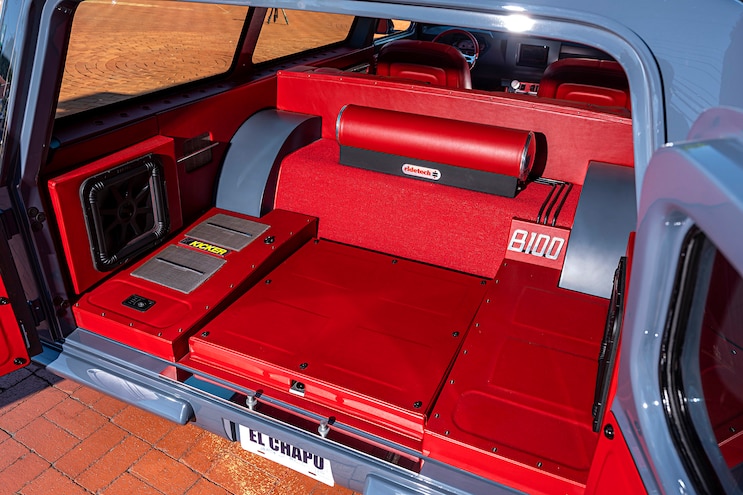 View Photo Gallery | 22 Photos
Photo 6/22   |   1976 Ford B100 El Chapo Interior Rear
You can't help but to look at this Ford and know that it is very different than anything else out there. It's a unique looking platform with one-off parts galore as well as a ton of time, effort, and passion that went into its creation. Since the build was finished, it has won multiple awards at shows all over the country and now belongs to a new Owner, David Lucas, who jumped at the chance to be different and drive this B100 all over the map gathering looks of amazement along the way. 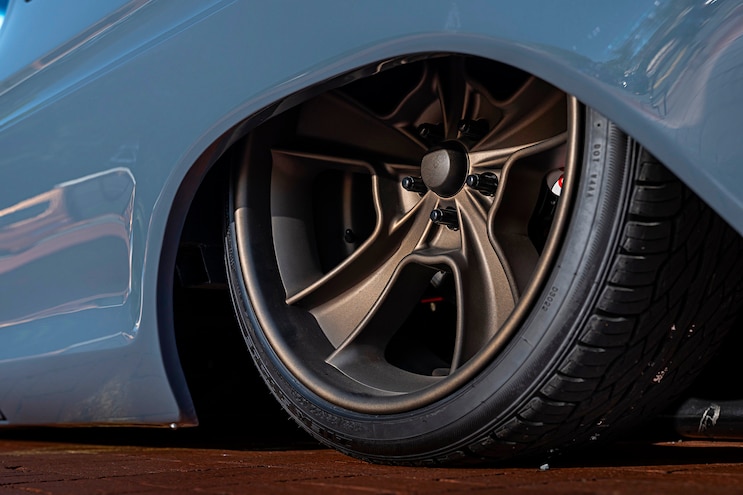