And Then There Was ONE 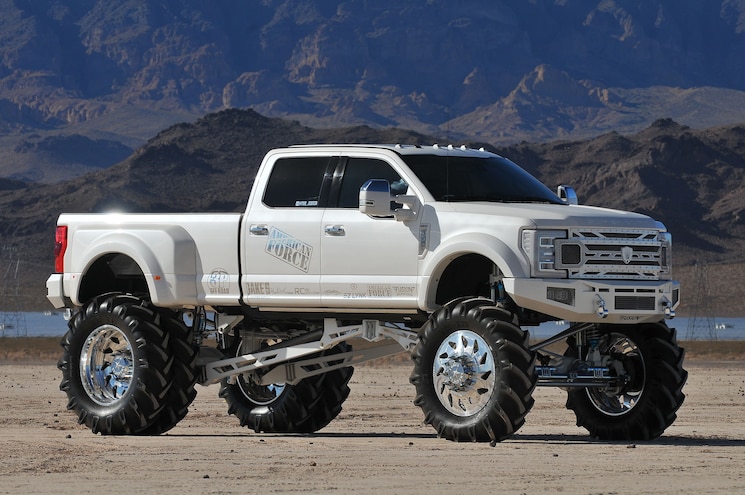 When the name of your vehicle starts with the word "Alpha", you better have something unique that helps creates a trend or at least something better than most. Josh Burnett succeeded with his 2017 Ford F-450 Platinum dually in both of those categories. Josh grew up in East Texas and custom trucks were just a way of life. The first time he remembers seeing a custom truck was at the age of ten, "I remember my family friend Shawn Hickey coming by my house with his custom Ford truck," Josh tells Truckin, "I don't even know why, I just know he stopped by, and I was mesmerized."
Growing up in a very low-income area, Josh couldn't afford a truck to drive and call his own, so he learned what he could about trucks and began building them for other people to earn money. At fifteen, Josh purchased his first truck, a Dodge Ram that was a "piece of junk." He continued learning more about custom trucks and building them for all his friends. Josh eventually went through about sixty different vehicles before walking into the dealership in Decatur, Texas, and purchasing his 2017 Ford F-450. 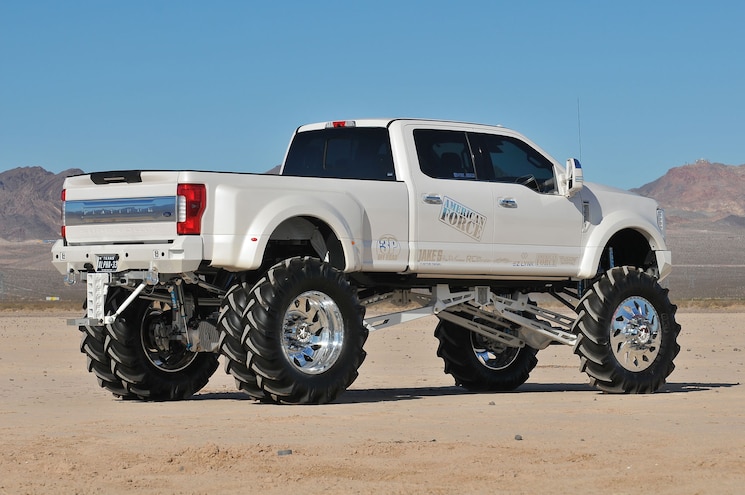 View Photo Gallery | 20 Photos
Photo 2/20   |   2017 Ford F450 The Alpha Dually Rear 3q
In the past, Josh had been commissioned to build trucks for the SEMA show, but as luck would have it, the trucks weren't able to make it. Once he got his new Ford Platinum home, he decided to guarantee this build would make that long trip. Josh started to search around for companies to help with the build or add him to their booth. The first company to take interest was American Force Wheels out of Miami, Florida. A set of 28-inch American Force Fury were chosen out of their newest catalog by Josh to outfit the rig.
He enlisted Stephen Bayles from B&C Off-Road in Pasadena, Texas, to handle all the heavy work of lifting the brand-new F-450. Fury Off-Road Tires got on board and the tires were sent to Josh, but they didn't work on the wheels he had purchased. This was the very first Ford F-450 that was lifted with 28-inch wheels and it came with quite a bit of trial and error. Josh used B&C Off-Road as a hub for all the parts to arrive. The hard-working crew there added every piece that arrived including the Fusion Bumpers and the Gravel Empire Grille. The process took five grueling weeks of nonstop work to get the brand-new Ford Platinum where he felt it should be. The crew turned over a finished product to Josh just hours before the transport was set to pick it up. 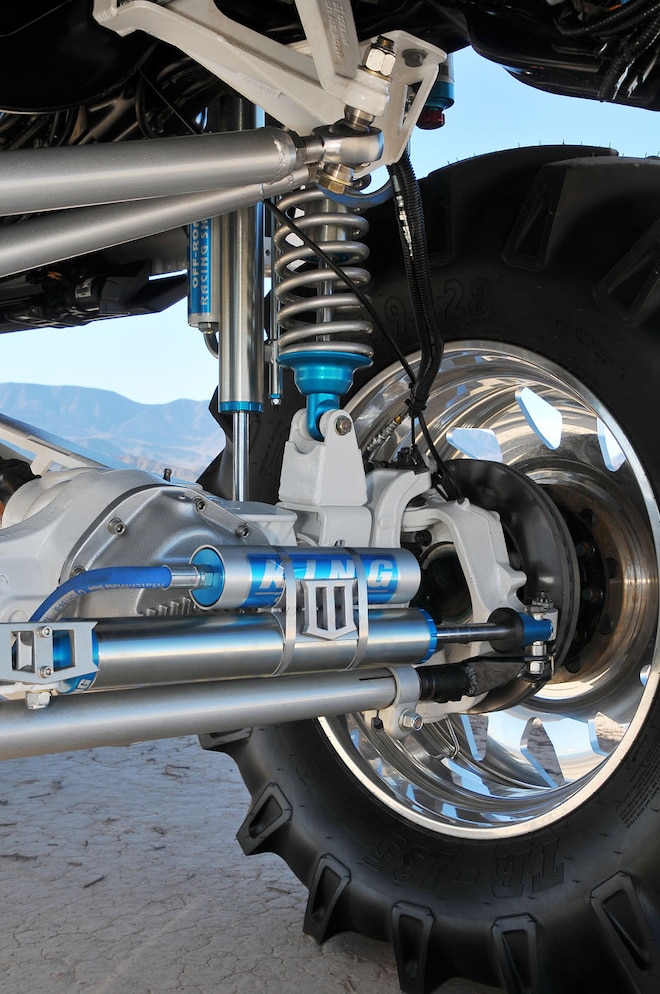 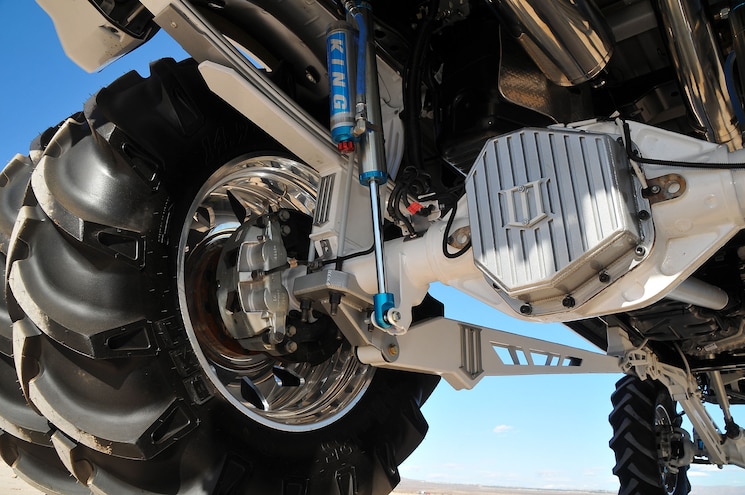 View Photo Gallery | 20 Photos
Photo 4/20   |   2017 Ford F450 The Alpha Dually Rear Suspension
With one week to go, Josh realized that Fury tires were too wide for the American Force wheels and just wouldn't fit. Josh scrambled and ended up with 53-inch tractor tires in order to make it to the Las Vegas show. "When you're the first one to do something," Josh adds, "it doesn't always work like you planned it to." Within that short time, they turned the lift up to 20 inches and mounted the massive tires and called it the "Alpha Dualie."
Josh wishes to thank his beautiful wife, Tiffany, for putting up with him being consumed with the "SEMA crunch." A special thanks goes to Jeff Isbell for driving in the middle of the night to meet him with the trailer to pick up the tires and deliver them. Josh wants to thank Josh Knight, Dustin Skrillen, Josh and Travis Herzig, as well as the rest of the 3P crew for all their hard work on Alpha Dualie. Most importantly, he wishes to give thanks to the crew at American Force for being the first company to believe in him and keep him on track throughout the build. 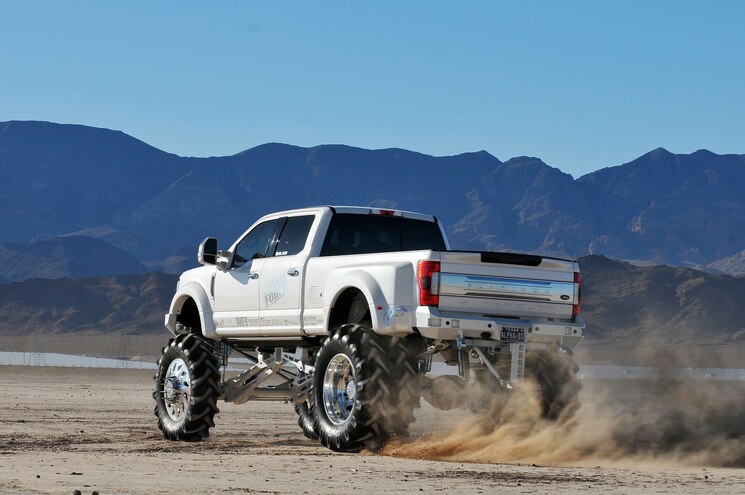 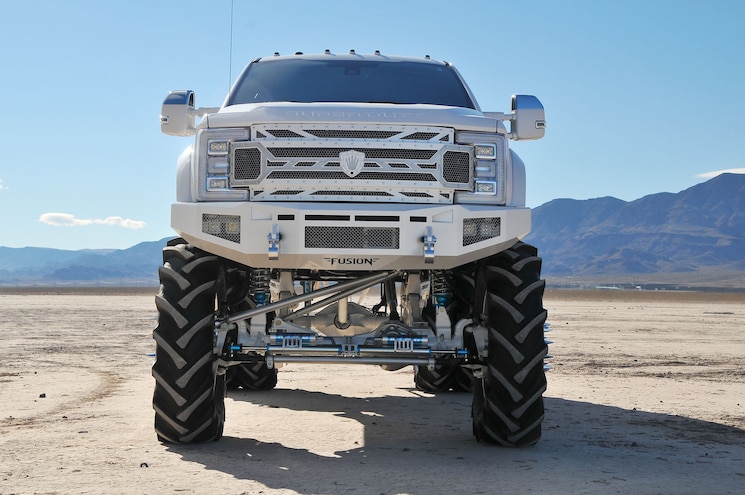