A 640hp Monster That Was Built to Flex on Everyone 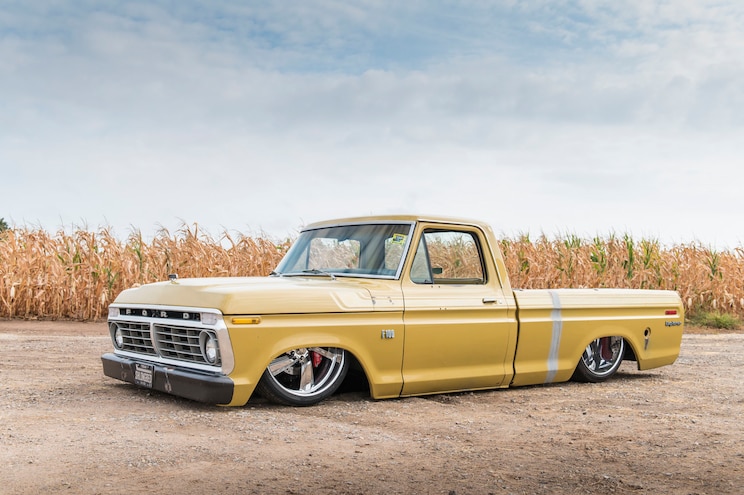 Lonnie has always loved Ford trucks, not because his last name is Ford, but because there were not many out there that were fixed up. Lonnie first started out with a 1986 Ford Ranger that ended up being body-dropped and fully shaved by the time it was finished. Then he got a 1975 F-100 Explorer that he bought from a friend in Louisiana. Once Lonnie had the truck back in Texas, he planned to start working on the truck, but life got in the way and he just couldn't start the project. So, he drove the truck for a few years before finally getting the perfect set of wheels for it. Being that Lonnie is from Texas, you know he had to do the 24x15s for the rear. He first wanted to back half the truck with the factory 302 that was in it, but like every project, things just escalated. 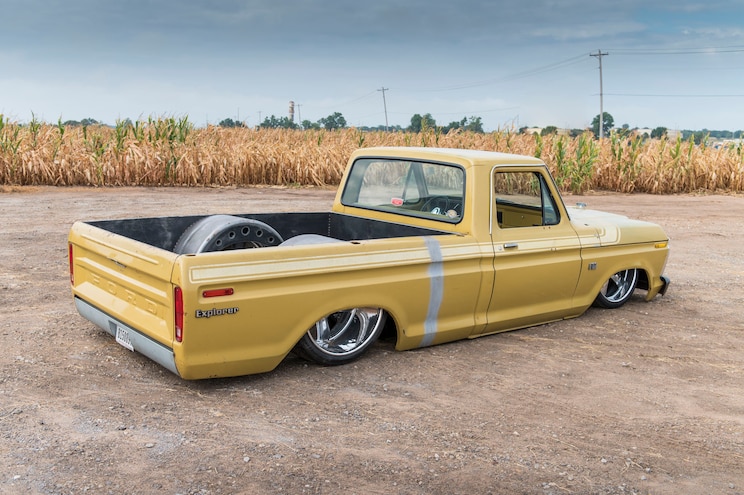 View Photo Gallery | 11 Photos
Photo 2/11   |   640hp 1975 Ford F 100 Rear 3q
First, he had a fully custom-built engine in mind and knew he had to take it to his friend Jeff Walberg at Custom Automotive Machining in Houston, Texas. Once Jeff was locked into building something special, Jeff told Lonnie they should build a 440 Ford and that's when the engine started to come together. Jeff started with a Dart SHP block, Eagle crank/rods, Mahle custom pistons, Comp Cam custom roller, Crower Hippo lifters, Romac Billet chain, AFR Renegade heads, Edelbrock super victor custom ported to match heads, carburetor custom built by DaVinci/MSD Billet Distributor, and a Canton Fox Body pan. This combo gave them a winning 440ci powerhouse that put out 640 hp and 584 lb-ft. 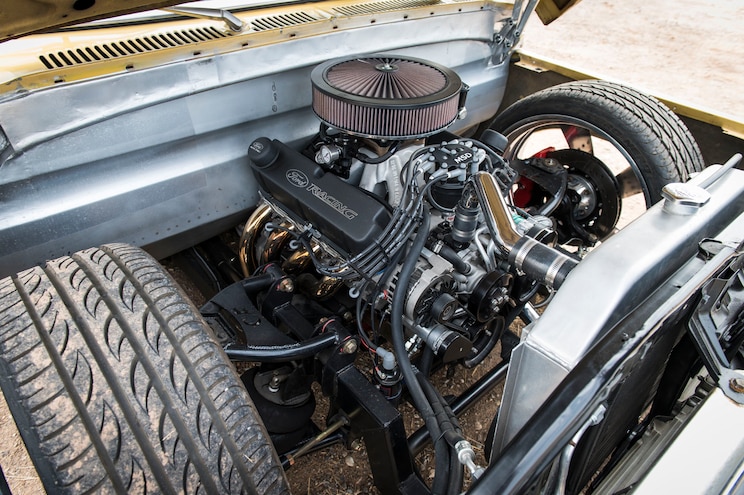 View Photo Gallery | 11 Photos
Photo 3/11   |   640hp 1975 Ford F 100 Engine
Now that the engine was done, Lonnie needed to get a transmission that could hold the power. He knew that he had to go talk with the guys at Circle D transmissions. They started with a C6 Ford transmission that they custom built to hold the horsepower and torque that the engine would be putting down. They worked out a custom 2850 convertor that would help put the power out when needed. Once all these things came together, he had to find someone to do a fully custom frame. Before getting started on this project, Lonnie always felt that when you lay the trucks on the ground, the shortbed trucks look too short and the longbed trucks look too long. His best friend, Radar, suggested that they cut it down in between the two. The bed was shortened 9 inches to give it the right look.
Lonnie called up John at Chassis Fab to work his magic on a full custom frame. Originally, Lonnie always wanted to use all Ford parts, so he had a set of 2000 Ford Expedition spindles that he had from a full set of custom Wilwood big brake kit. Chassis Fab built custom control arms to work with the Expedition spindles and the brakes. Chassis Fab then built the rest of the frame including a Mustang rack up front and engine mounts on the full custom frame. Once the front was done, it was time for the rear. A custom two-link was built with a custom bed floor. A custom fuel cell was built with a Crafty B Nostalgic Speed fuel cap. To finish off the frame, a full AccuAir system was installed to keep the truck up off the ground for driving. 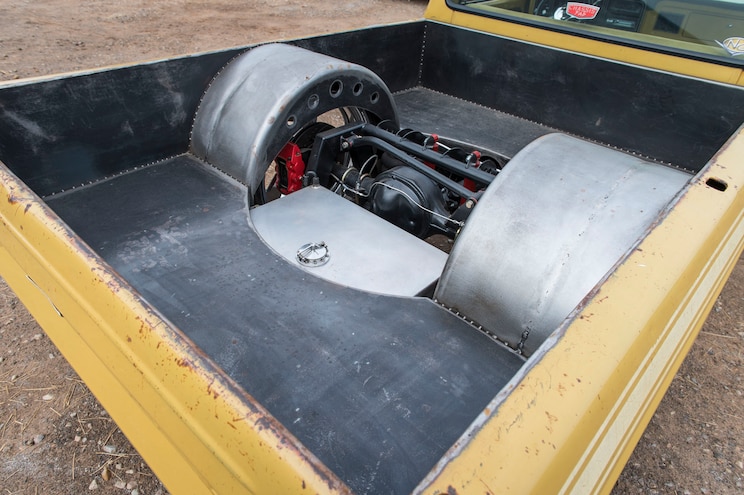 View Photo Gallery | 11 Photos
Photo 4/11   |   640hp 1975 Ford F 100 Bed
The truck now was ready for some body mods, so Insanity Metal Works did some firewall work and made the body line flow through the engine bay to match the outside of the truck. Once the truck was ready to be put back together, Lonnie took it to Danny at Leibham Racing for the final assembly. Danny custom built a set of polished stainless headers for the engine and polished full exhaust system using Jones mufflers. The headers are a piece of art that sometimes he would just sit and stare at. Once Danny was done with the exhaust, it was time for all the little things like radiator, custom stainless hoses, Vintage air, steering components, transmission cooler, driveshaft, fuel system, ignition system, and painless wiring harness.
This truck was something that took Lonnie almost 8 years to modify to this point, and it really was a special time in his life to just see it all together and now to hear it run. Lonnie can't describe how he felt to finally get to hear it and drive it for the first time. It was great to be able to drive it with his wife, Christel, and son, Logan. It is not 100 percent done by any means, but it is at a stage that he can at least enjoy it and take to some shows before he tears it all back down to finish it. Lonnie's future plan is to take the truck back down and powdercoat the frame, chrome a few things, do the interior, and paint the truck back the original color with the stripe. Also, he may have a few tricks under his sleeves. We'll all just have to wait and see what he will do next. 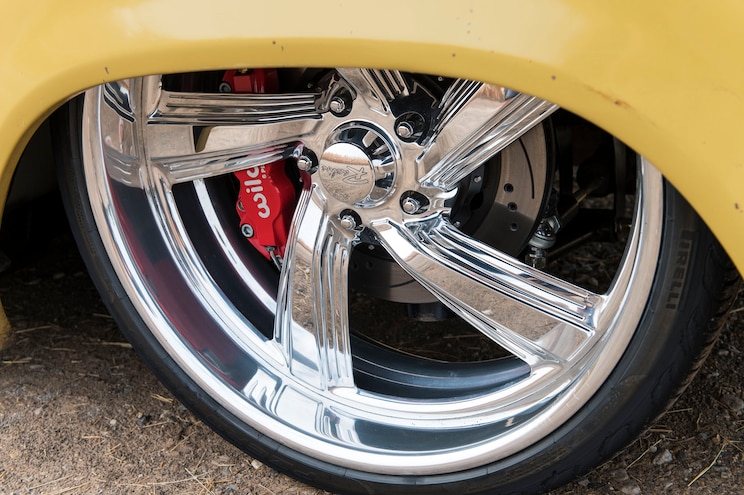