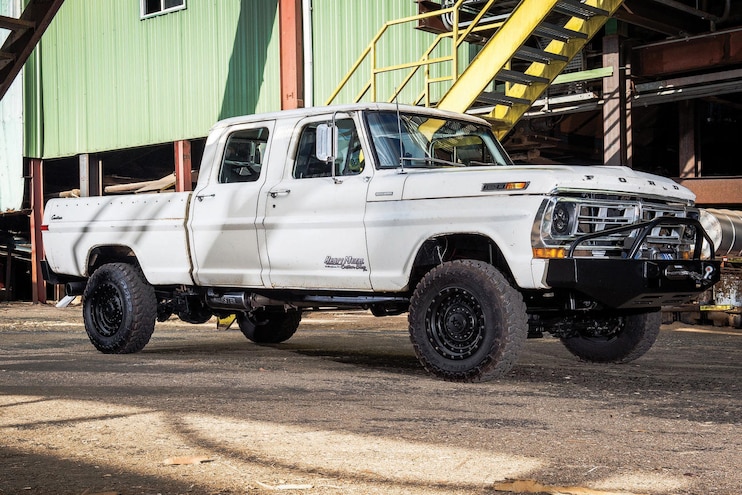 Ted and Angela Mischaikov met Paul and Jennifer Teigrob, the owners of Heavy Metal Custom Shop in Bellingham, Washington, at one of their company's open house events. After seeing some of their projects, Ted knew Heavy Metal would be the perfect company for building the custom truck his late daughter, Megan ("Mouse"), always wanted.
Ted found a clean two-wheel-drive '72 Ford F-250 Custom crew cab with 70,000 original miles on it in Grand Junction, Colorado. After purchasing the rig for a very reasonable price, he had it shipped to Heavy Metal, where the project—melding a pair of F-250s with a 30-year age gap between them (a 7.3L, four-wheel-drive '02; and the classic '72)—got started in earnest. 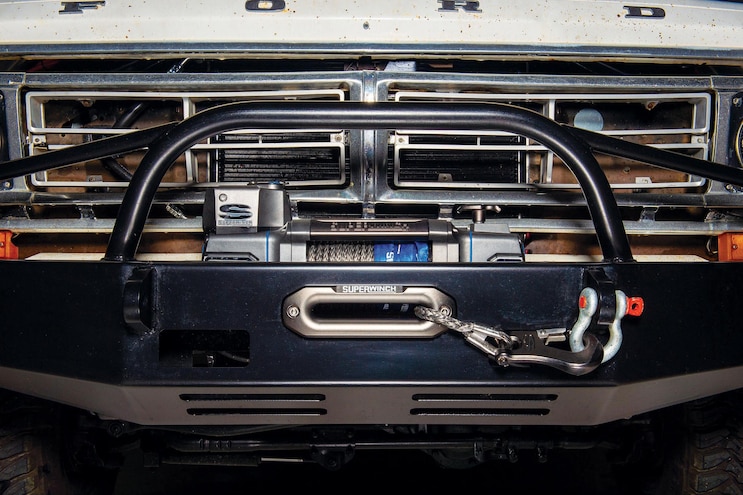 View Photo Gallery | 34 Photos
Photo 2/34   |   A Superwinch EXP12S1 Integrated Series 12,000-pound winch dominates the custom-fabricated front bumper of "Gus" the Ranch Truck. It is there to handle all kinds of ranch duties, including recovering stuck vehicles and, if need be, even getting the big Ford out of a jam. But, with its big tires, four-wheel drive, and a 7.3L Power Stroke engine under the hood, we guess it will be saving other vehicles far more often than itself.
After removing the cab and bed from the rusty two-wheel-drive chassis, Heavy Metal's crew went to work repairing the rusty floor panels. Ted wanted to retain the original Ford paint's "Ranch Truck" patina, so the exterior body panels were left untouched. Even though the '72 crew cab is a big truck, it still has a shorter wheelbase than the '02 donor chassis. So, 8 inches were removed from the later frame in order for it to fit the dimensions of the '72 shell. In addition to reducing the length of the chassis, custom mounts were fabricated to bring the cab and bed together as one unit.
The project's suspension still retains the '02's original front and rear leaf springs as well as the shocks and brakes. To help whenever Ted tows or hauls a heavy load, an onboard Firestone Ride-Rite air compressor is mounted in the engine bay with airbags in the rear. A 2-gallon air tank is secured to the framerail under the passenger side of the cab, allowing Ted to run air tools and handle simple tasks like pumping tires up right from the truck. Additionally, the build team retained the newer F-250's electronically controlled transfer case and automatic front locking hubs to make things easier off-road. The modified chassis rolls on a set of LT265/70R17 Toyo Open Country M/T tires that are mounted on black 17x9 KMC XD Panzer wheels for a rugged, go-anywhere look that is backed by capability. 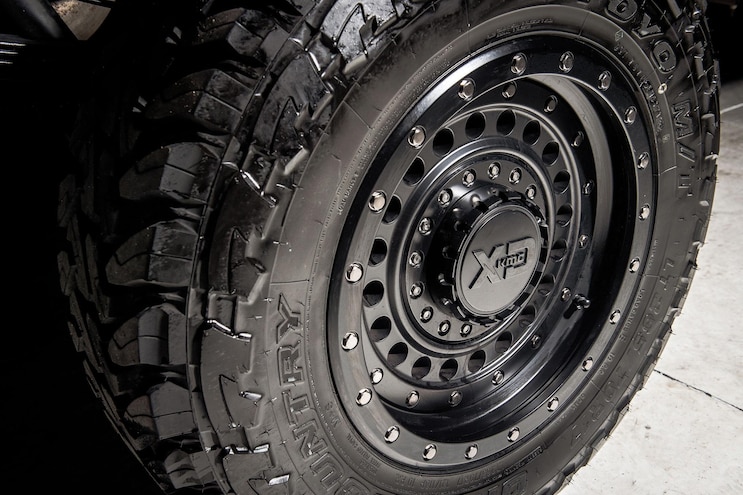 View Photo Gallery | 34 Photos
Photo 3/34   |   Gus rolls on LT265/70R17 Toyo Open Country M/T tires wrapped around blacked-out 17x9 KMC XD Panzer wheels.
Once the chassis modifications were complete and the paint dry, Paul, Jennifer, and their build team made up of Luke Proksch, Amelia Tritz, and James Erwin, secured the cab and bed to the chassis using the newly fabricated mounts. Then the real work, wiring the truck, began in earnest. Rather than retain the '70s-era electronics and barely get the later-model diesel engine to work with the old platform, the team wanted to fully integrate all of the '02 chassis' capabilities into the '72 body. A seemingly endless amount of wires and harnesses (that make everything from the antilock braking system to backup parking assist sensors and the four-wheel-drive system operate properly) had to be traced, cut, and spliced. Paul and his team painstakingly sorted through all the wiring and made it work in the older body just as it did in the newer F-250—even the cruise control and full OBD II diagnostics work as they would on any other '02 F-250. 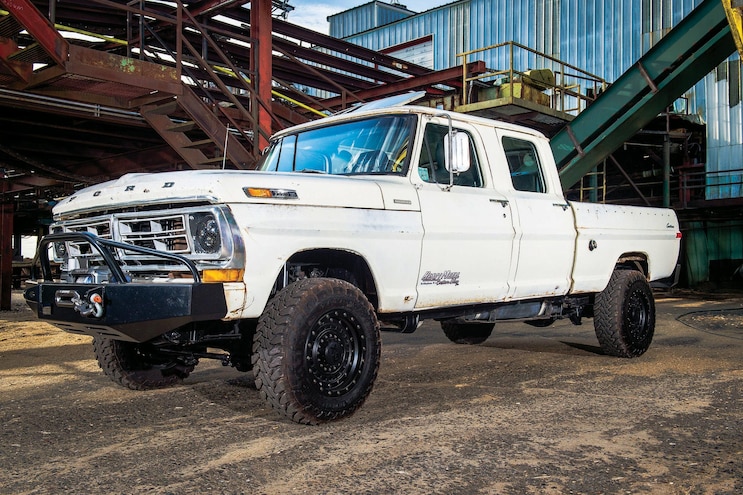 View Photo Gallery | 34 Photos
Photo 4/34   |   Gus is a great-looking '72 Ford F-250 that rides on an '02 F-250 chassis, complete with a 7.3L Power Stroke diesel engine under the hood.
No one wants to drive a big four-wheel-drive truck with a wimpy gasser under the hood, so Ted and the crew at Heavy Metal Custom Shop wanted to use the 7.3L Power Stroke V-8 engine from the donor chassis. Of course, the engine-control wiring had to be integrated into the old truck. And, a cooling system and intercooler capable of keeping the truck on the road for long road trips was required. Ken's Radiator created a custom piece that fits the '72 F-250 radiator-support dimensions and has the capacity to keep the 7.3L cool. The intercooler was developed by Hart's Radiator, and Heavy Metal fabricated charge pipes to channel the compressed air from turbo to intercooler, and into the engine. Spent exhaust gases are channeled out of the engine through a turbo-back Banks 4-inch exhaust system that culminates at a satin-black exhaust tip that exits the body behind the passenger-side rear tire. The engine is backed by a Ford 4R100 four-speed automatic transmission from the '02 chassis. 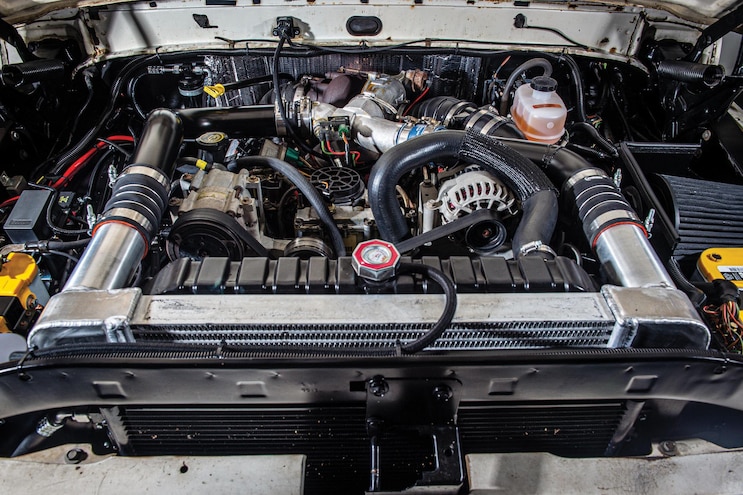 View Photo Gallery | 34 Photos
Photo 5/34   |   With a little help from a custom intercooler and radiator, the 7.3L looks right at home in the F-250's engine bay.
The team also worked on improving the driving experience with modern advancements like a new sound system. But, instead of hacking the dash to support an audio/video head unit, they turned to Mobile Music in Bellingham, Washington, to install a Retro Sound stereo head unit that mimics the looks of a vintage "twin-shaft" radio, with modern electronics inside. Signals from the radio are fed to a complement of Hertz Audio amplifiers and speakers along with a Rockford Fosgate subwoofer mounted below the rear seat. The inner panels of the cab were lined with Dynamat sound deadening to combat road and engine noise. To help Ted keep an eye on basic drivetrain parameters, Heavy Metal Customs installed a Dakota Digital VHX gauge cluster that looks like the original piece but functions with modern-electronic precision. For more advanced measurements, like boost pressure, transmission temperature, and exhaust-gas temperature, as well as enhanced engine tuning, they installed an Edge Products Evolution CTS2 monitor/programmer using a suction-cup mount on the lower left corner of the windshield. It also works with the Edge backup camera mounted on the license plate frame. To finish the interior and give it a modern and comfortable touch, a set of front and rear seats from a '13 Ford Raptor were installed on fabricated custom brackets. 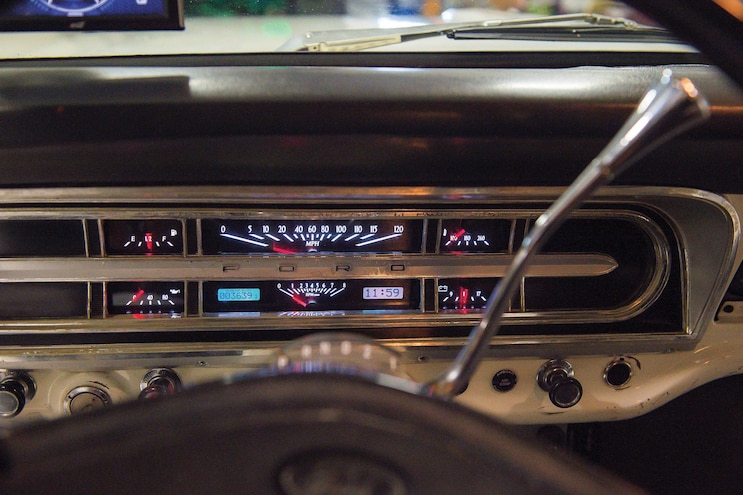 View Photo Gallery | 34 Photos
Photo 6/34   |   A Dakota Digital VHX replacement gauge cluster provides the driver with all the standard vehicle information of a modern truck while maintaining a factory look.
As the wiring was being completed, the crew installed a set of JR Speaker LED headlights up front that are protected by wire rock shields. Two of the last things that were added literally cap both ends of the F-250. Paul and Jennifer hired local fabricator Ryan Bolton to create one-off front and rear bumpers. The front includes a pushbar as well as cooling vents, a mounting provision, and anchors for a large 12,000-pound Superwinch EXP12Si Integrated Series winch. The rear piece is reminiscent of most '70s-era step bumpers, only with smoother lines and the addition of four OEM parking sensors. Both bumpers are finished in satin black.
The truck is named "Gus," after the horse Megan rode at the Colorado ranch where she worked. We're certain Ted, Angela, and the rest of their family are proud of the four-wheeled namesake built in honor of Mouse, and we're sure she would have enjoyed "riding" this Gus around the Colorado Mountains, valleys, and ranches. 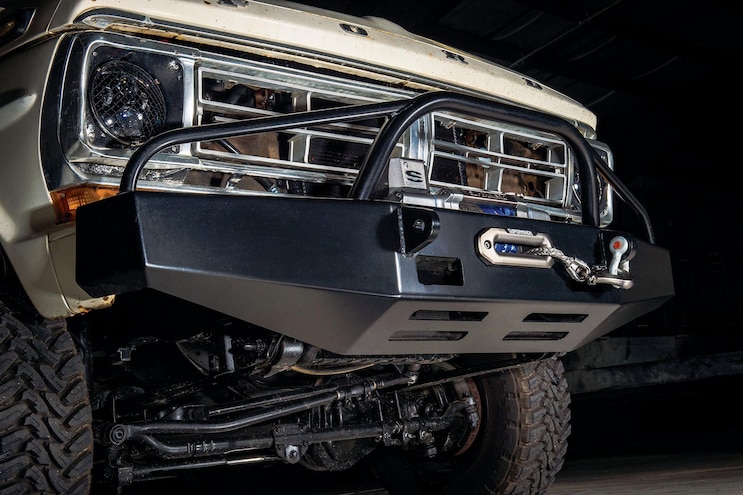 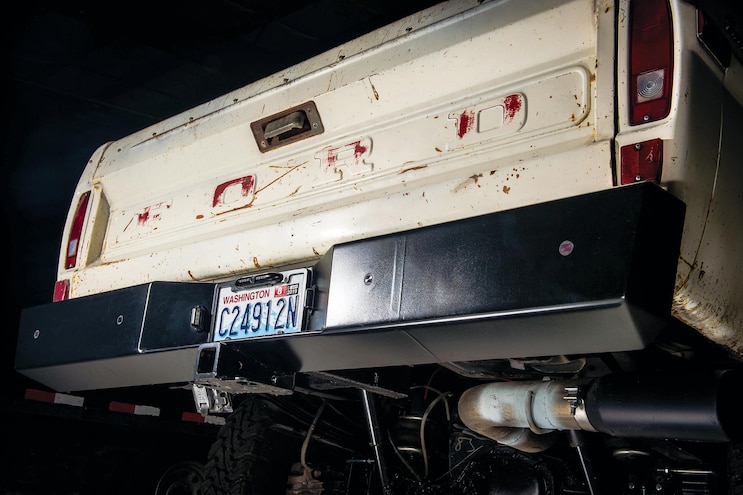 View Photo Gallery | 34 Photos
Photo 9/34   |   Ryan made this rear bumper to mimic the style of an original '70s-era step bumper. He also integrated the parking-assist sensors from the project's '02 Ford F-250 donor truck. 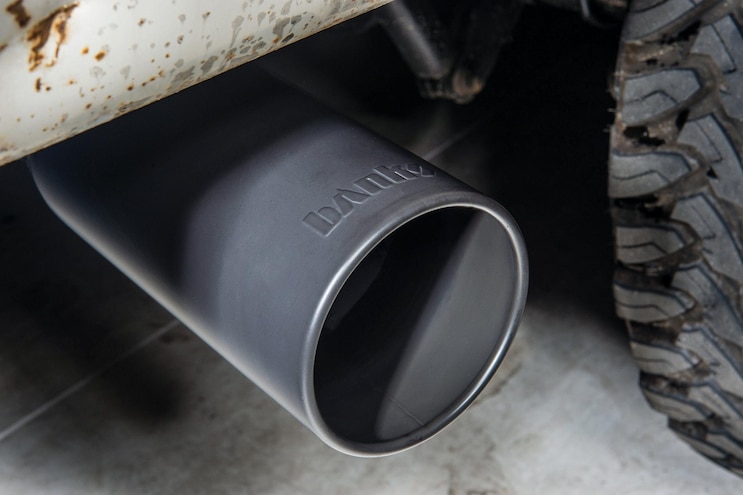 View Photo Gallery | 34 Photos
Photo 10/34   |   The satin black exhaust tip looks much better on this truck than a polished tip would. 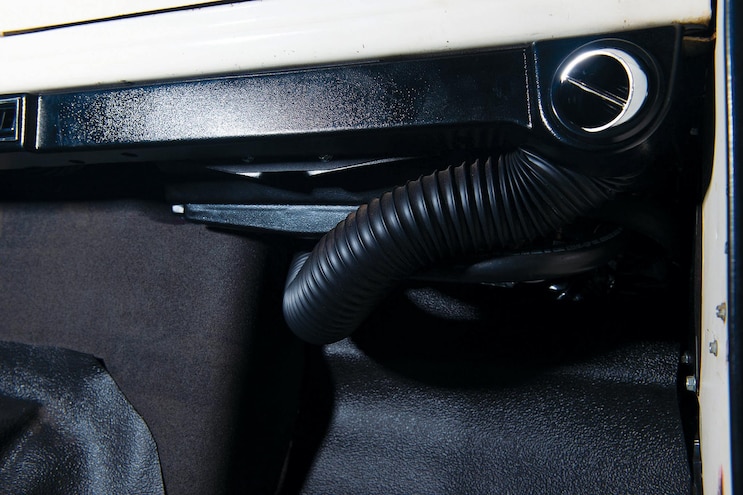 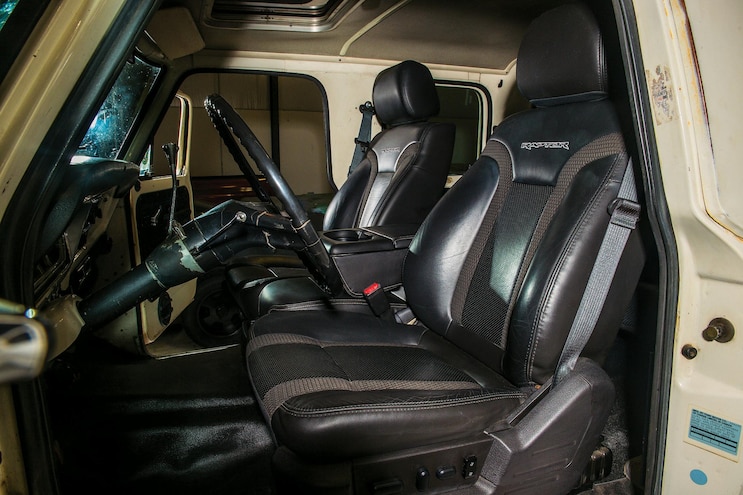 View Photo Gallery | 34 Photos
Photo 12/34   |   Leather-clad seats from a '13 Ford Raptor make the interior of this classic pickup a very comfortable place to be, whether it is for off-roading, daily driving, or a long road trip. 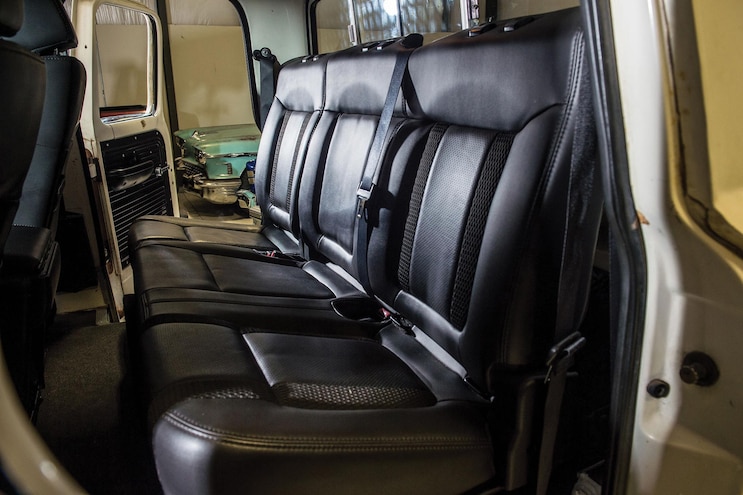 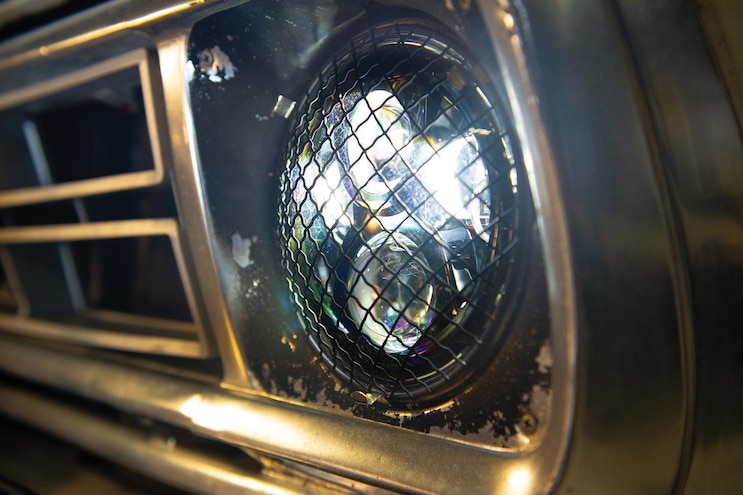 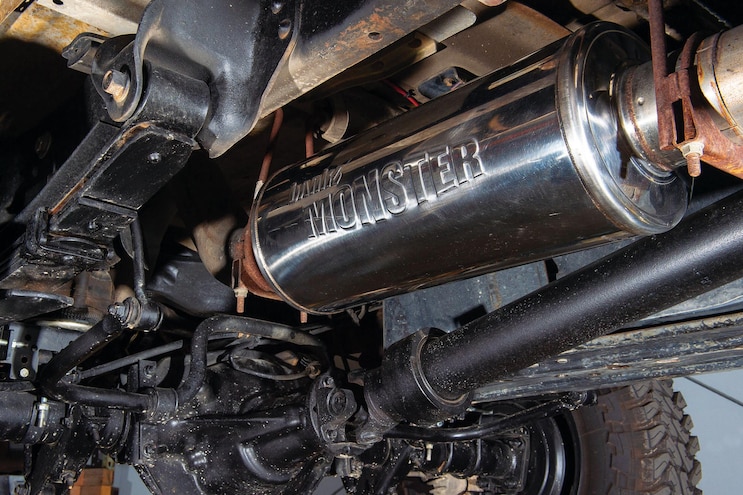 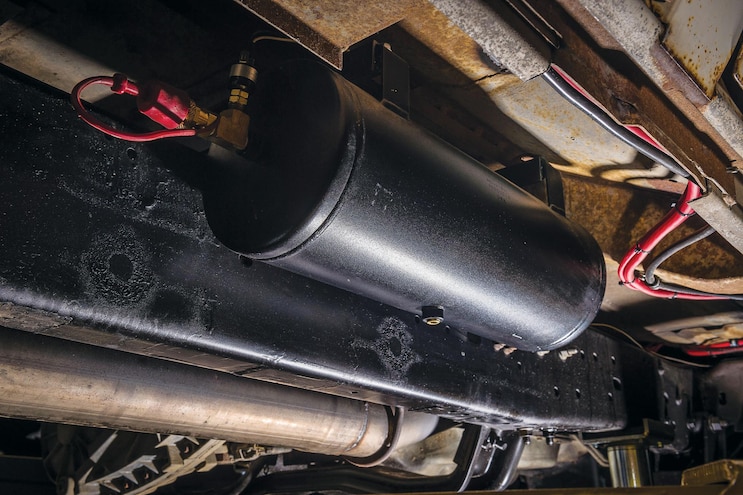 View Photo Gallery | 34 Photos
Photo 16/34   |   A 2-gallon air tank is mounted to the passenger-side framerail, below the cab. The air is used to run tools and inflate tires and the rear bags without requiring an external air source. 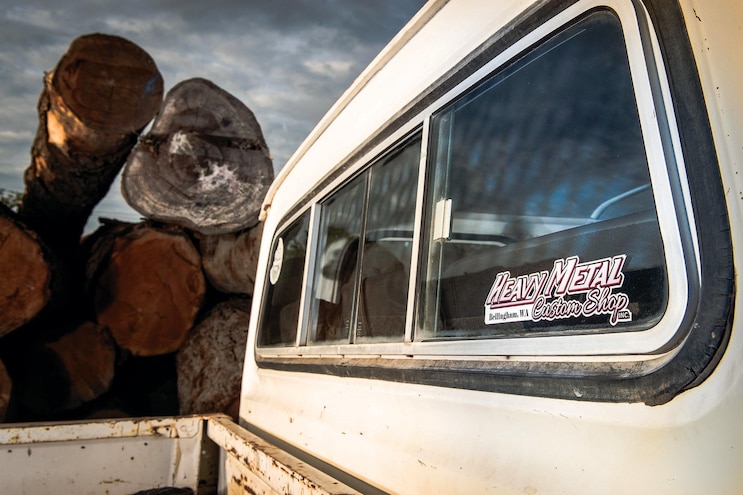 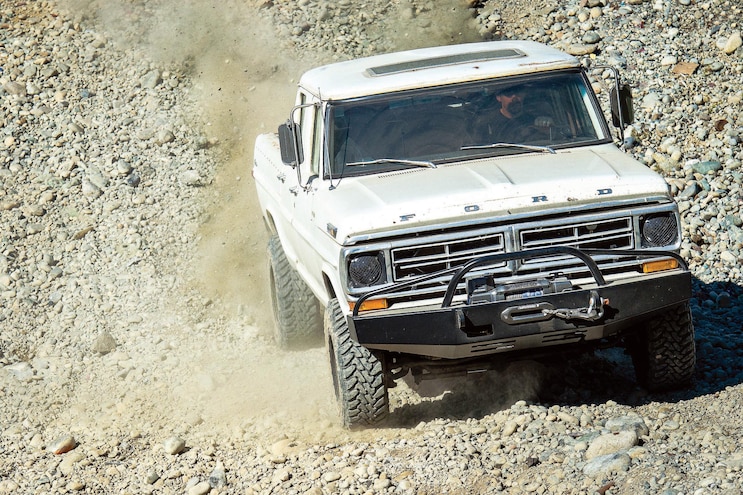