Katastrophic Success: A Mixture of Old and New Creates a One-of-a-Kind Rat Rod 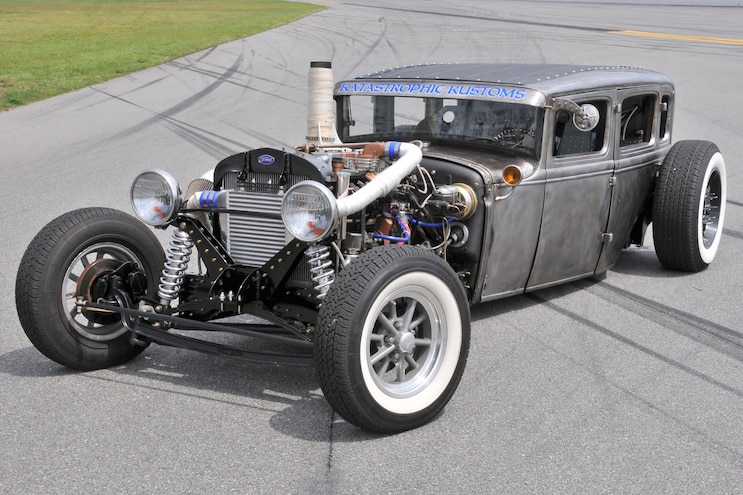 Many of you already know how magazines can be a great source of inspiration. Studying pages filled with images of different vehicles is the perfect way to define your own tastes and mentally design your personal dream machine. That's what happened to Jason Walters from Bluffton, South Carolina. 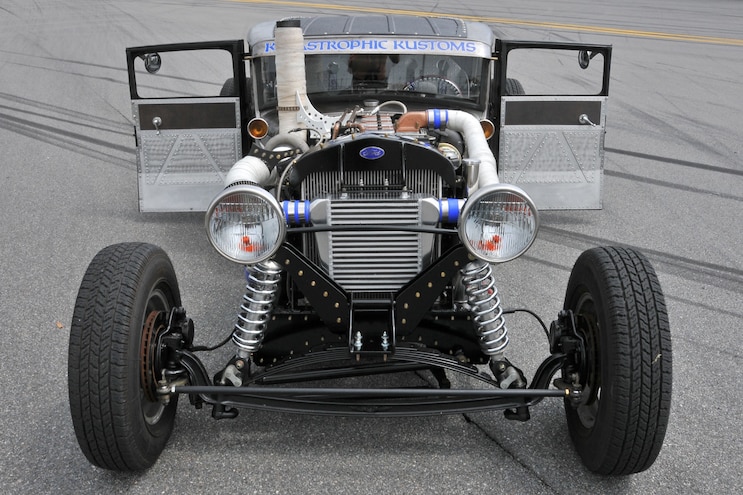 View Photo Gallery | 16 Photos
Photo 2/16   |   The suicide front end is modernized using a transverse leaf spring from Speedway Motors, with a pair of coilovers that compensate for the extra weight of the Cummins engine.

Jason grew up around cars, thanks to his family's body shop business, where he learned the fine art of welding at age 13. An avid car enthusiast ever since, he started the unique ride way back in 2012 after seeing photos of a rat rod in a magazine.

The first half of the build began with a 1931 Ford Fordor body Jason found in Summerville, South Carolina. Since a small-block Chevrolet engine didn't fit the image, he purchased a 1993 Dodge Ram D3500 dualie pickup to serve as the donor vehicle. The adventure began by stripping the Dodge, retaining only the 12V Cummins engine and 46RH transmission, then selling the rest. He used the same approach with the vintage Ford, keeping just the body. The real challenge was creating a platform to join the two.

A trip to the local steel supplier yielded 2x4-inch, 3/16-inch-wall-thickness rectangular tubes, which would be used to create a frame that would accommodate the weight and dimensions of the big diesel, as well as the length of the Ford body. For a touch of nostalgia, the original 1931 Ford suicide front end was retained but upgraded with disc brakes, 4-inch drop spindles, and a transverse leaf spring from Speedway Motors. Because the Cummins registers a hefty 1,100 pounds on the scale, Jason knew a single spring would not be strong enough. To counter that weight, he fabricated a custom shock mount to hold the pair of Speedway Motors coilovers, rated at 500 pounds each. Moving to the rear, Jason designed a triangulated four-link suspension, which holds a 9.5-inch rear axle from an 2003 Chevrolet Silverado 2500. The rear setup is augmented with a pair of Bilstein shocks and Slam Specialties airbags that allow him to adjust the vehicle height. A Viair 450 compressor energizes the system using FMC Technologies valves and 3/8-inch lines to pressurize the vintage firefighter air tank visible in the rear window, now used as a reserve tank. 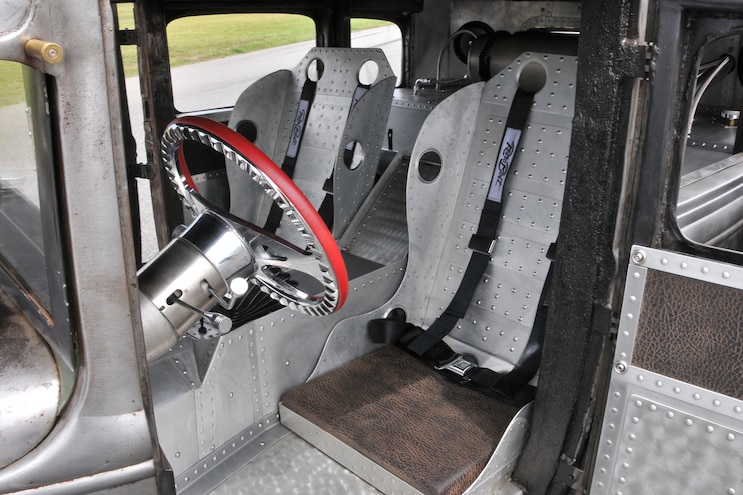 The custom chassis became a roller thanks to 15-inch repro Rocket Racing wheels up front that are similar to the old dragster style, wrapped in Coker Classic rubber. In the rear, 17-inch Moto Metal 8-lug rims use Firestone radials to plant the power. Wide whitewalls continue the nostalgic theme.

The front disc-brake setup is unusual, as it's a hybrid consisting of 1939 Ford spindles mated to 1973-1987 GM rotors and calipers. The updated brakes are important for stopping the almost 4,000-pound vehicle. Getting the steering dialed was an even bigger challenge. With the suicide front end, Jason knew he had to have a forward-facing pitman arm to keep the geometry right. After a few hours of searching the Internet, he found that a Chevy Astro Van steering box would work since it has the correct pitman arm and uses the same steering-hose fittings as the Dodge. After welding on a drag link and adding some fluid, he tested the steering and found the wheels turned in the opposite direction. Apparently, when Jason relocated the tie rod to the rear (it's originally in the front), it reversed the steering. The best solution was to use a Chevrolet S-10's steering box (same bolt pattern) and rotate the pitman arm to the front, thus making it steer backward. Engineering this "double negative" was the perfect solution to correct the steering problem.

The rat rod's 5.9L 12-valve Cummins engine was fitted with a larger Holset Turbochargers HX Series turbo, 90hp injectors, an intercooler, a Denny T Performance fuel pin and governor spring, and Holley's Big End electric pump. Custom motor mounts were fabricated to hold the big diesel in place, and the exhaust is that simple little stack on top. Power is transmitted to the rear using a hydraulically controlled four-speed automatic transmission with overdrive and a transmission cooler, shifted by the B&M Racing shifter in the cockpit. The radiator was originally designed for a chopped 1932 Ford, and Jason added a Zirgo 3,630-cfm electric fan, which was the largest unit he could find.

With the powertrain essentials in place, Jason began the major undertaking of repairing the vintage Ford body. "Nothing is square or an ordinary shape when it comes to these old cars," he says. "I spent months and months using the wooden parts as templates for steel replacements." Once the wooden frame components were replaced with metal, Jason lowered the Fordor's profile by chopping the top 4 inches, adding roof sheetmetal from a 1999 Chevrolet Suburban, channeling the body 4 inches over the frame, and giving the doors the "suicide" treatment. Creating the interior was an exercise in hand craftsmanship, because, says Jason, "I didn't want the complete rat rod look. I wanted something just a little more refined." He put the plan into effect by developing a distinctive pair of bomber seats, fabricated from 0.063-inch aluminum. The industrial flavor is everywhere inside, thanks to the all-aluminum interior, formed over 1x2-inch steel tubing and accented with more than 4,000 aircraft rivets. Jason even installed a Vintage Air A/C unit underneath the cowl, ensuring he can enjoy the South Carolina summers in cool comfort.

How is the newly created rat rod to live with? Jason drives his dream creation to work quite often, as well as around town, and says it cruises effortlessly at 75 mph on the Interstate. If there is a downside, it's all the admiring cell phone photography that occurs while this unique ride is rolling down the highway! But, when you think about it, is that really a downside? 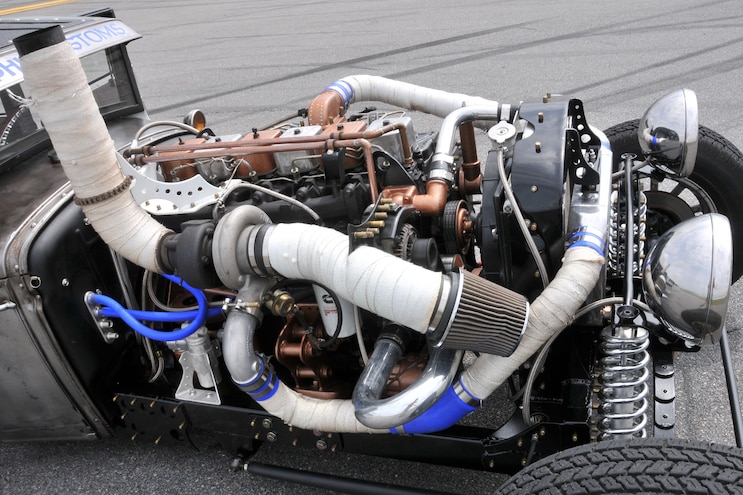 View Photo Gallery | 16 Photos
Photo 4/16   |   On display for all to see, the turbocharged Cummins is an unexpected powerplant for this vintage Ford, causing spectators to do a double take. Outfitted with a long list of aftermarket improvements, it's connected to a 46RH four-speed automatic transmission and a rearend sourced from an '03 Chevrolet Silverado 2500 (with 3.73 gears).