A dream becomes reality with a little help from family. 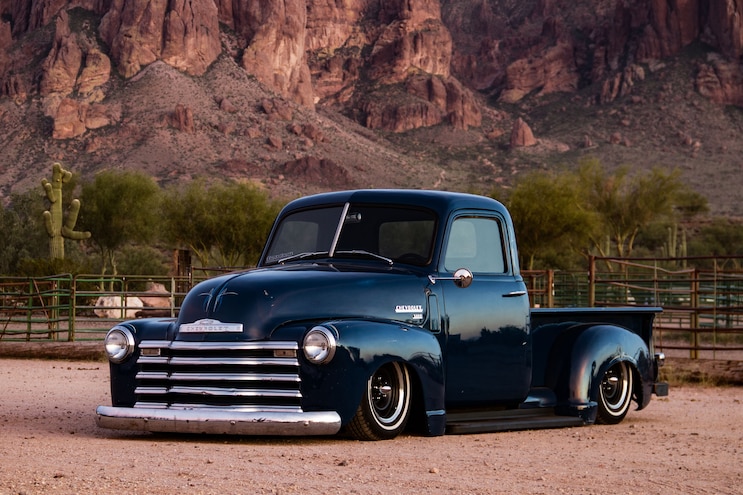 Family isn't just about blood relations. In the truck enthusiast world, when you spend a lot of time with people based on your mutual interests, you create bonds that are incredibly strong, and those people become more than just friends. The tale of Chad Fincher's 1950 Chevrolet 3100 pickup is that kind of story. It starts with a gift from a blood relative, his grandfather, whom he admittedly had been bugging about the truck for over a decade. After a small restoration project on it in the '90s, the truck had been sitting and Chad had his mind set on building it to new standards. He decided to leave the paint as is to give a nod to his grandfather's restoration work on it. While it has imperfections, it was a great start for what was about to become a laid-out farm truck.

Chad is no stranger to custom vehicles. His previous truck, a 1997 GMC Sierra that donned hot rod flames, a Cadillac front end, and a body-drop was featured right here in the pages of Truckin almost 10 years ago. In the time since, he has owned several vehicles including a stunning 1950 Ford "Shoebox" Coupe, which was sold to a new owner all the way in Sweden. However, when Chad's grandfather finally called to tell him to come to New Mexico and pick up this Chevy 3100, he knew his patience—and maybe a little pestering—had paid off. 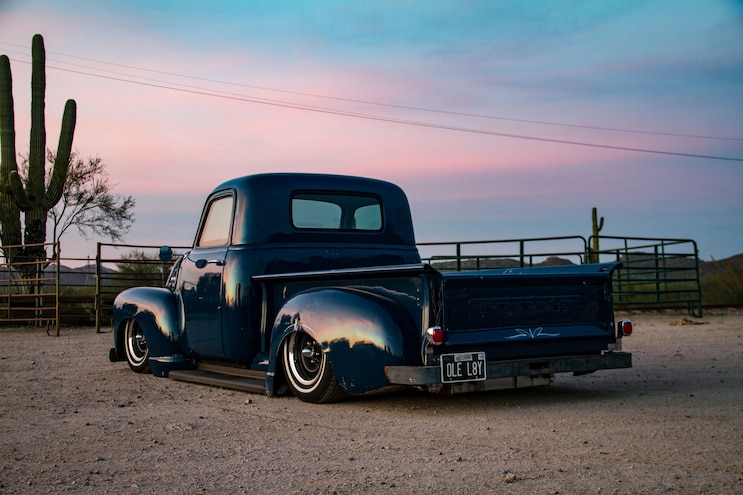 He brought the truck back home to Arizona to begin a build process he had been thinking about for a long time. As a member of a well-known worldwide truck club, Negative Camber, Chad has a huge extended family to turn to when in need of help, advice, or inspiration. At that time, the club had recently lost one of its founding members, Courtney "Tito" Halowell, who was also working on a '50 Chevy pickup. Courtney was an automotive journalist who had an unmatched knowledge and was always available to give advice, feedback, or any help he could. When Chad brought the truck to fellow NC member Todd Burton of Lowboy Motorsports, they had several in-depth conversations about the build process. Chad remembers thinking how motivated they both were by what Tito would have thought of the progress and the motivational things he would have undoubtedly been doing to push them along.

Todd got down to business on laying out the suspension, which would be the most visibly noticeable change to the exterior of Chad's Chevy. The crew at Lowboy Motorsports laid the 3100 on the ground with various suspension components added to the original frame. In the front, a set of custom upper and lower A-arms were installed, along with 1995 Chevy C1500 spindles with disc brakes. In the rear, Todd designed and built a custom dual wishbone four-link for the truck as well as adding a Lowboy bridge notch to allow for axle travel. For adjustments, the truck received Slam Specialties RE-6 air bags up front and RE-7s in the back, getting their supply from Viair Compressors and Accuair eLevel control. While the truck was torn apart, the frame was boxed in then powdercoated along with all of the suspension parts for protection from the elements and a clean overall look. In the bed, the floor was raised above the height of the notch, but the original, weathered wood was retained. The truck now lays down over a set of steel 15-inch wheels and 205/70R15 Goodyear whitewall tires for that old-school cool style. 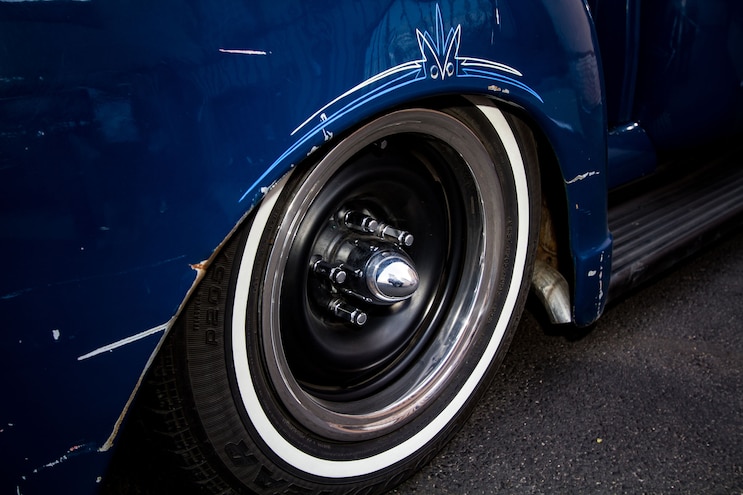 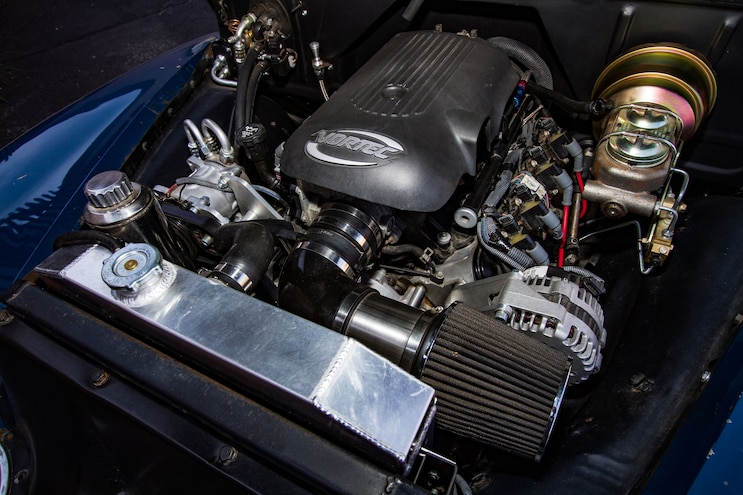 The next step in bringing the truck into a new century was to swap in a 2005 Chevrolet 5.3L engine and 4l60E transmission for reliability, better performance, and more power than a standard small-block. This modern upgrade gave Chad the peace of mind to be confident driving the truck all over to various shows as well as the ability to be daily-driven to work if he wants. To transfer that power to the pavement, a GM 12-bolt rearend from a '70s Chevrolet C10 was utilized in the rear, and Todd built a custom aluminum fuel tank between the framerails to deliver octane to the powerplant through an Aeromotive pump and Corvette fuel filter/regulator. To help it breathe a little easier, they installed Hooker headers and a Borla dual-muffler exhaust.

While the truck's body was mostly left the way it was from Chad's grandfather's restoration many years ago, the interior received a revamp with classic styling cues, modern technology, and a few creature comforts for long drives to shows. The truck was turned over to BW Upholstery in Phoenix, Arizona, to help reshape the interior. Chad is a big guy, so he gave Brian at BW the task of lowering, cutting down, and thinning out the foam on the bench seat so that Chad could fit just a little better inside. With the fit part figured out, the seat was finished by wrapping it in distressed black Symphony vintage vinyl with replica Impala inserts along with doing matching door panels. To add to the enjoyment of driving his 1950 Chevy, Chad needed some tunes for the road. Creative Audio Werks was tapped to build a custom enclosure for behind the rear seat and install a Bluetooth-only setup using Kenwood amplifiers, a 10-inch shallow-mount subwoofer, and 6.5-inch component speakers in custom kick panels. 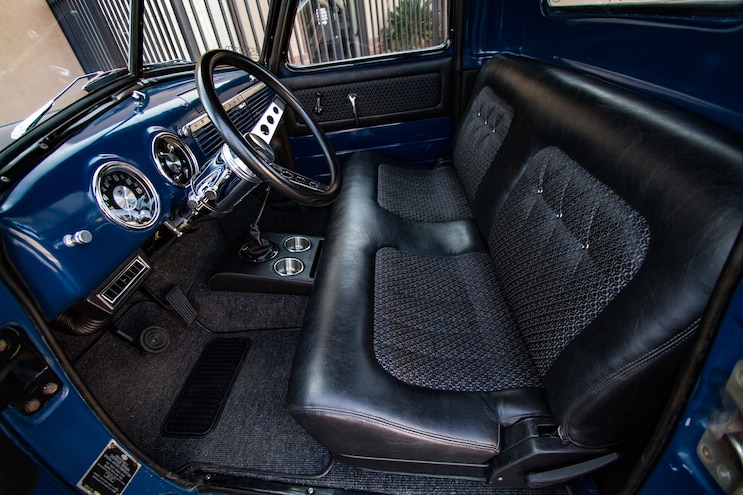 Now that the truck Chad fondly calls "Ole Lady" has been finished with the major modifications he wanted, he says it felt great to show his grandparents the changes that were made to it. He expects that the Chevy will give him enjoyment and memories for years to come. The nearly 70-year-old pickup has made it to shows all over the Southwest including Lonestar Throwdown in Texas. In the time since its debut, Chad has been asked hundreds of times if the truck was built on a Chevy S-10 chassis like many others of this body style. His response is always the same. He says that in their conversations at the start of this build, he and Todd from Lowboy Motorsports wanted to prove that it could be done on the stock frame—so that is exactly what they did.