More Than Just A Pretty Face 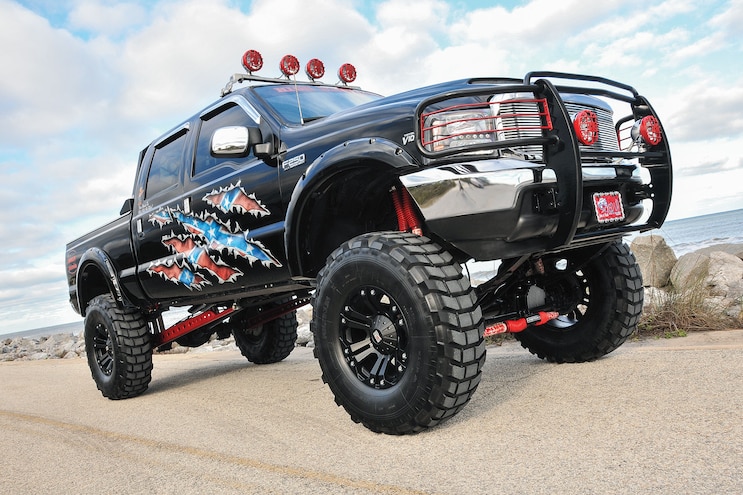 Mother’s Day in May 2007 turned out to be a Father’s Day in disguise. John Sherman and his wife Ruth live in Dunnellon, Florida, and were out with their children shopping for a Mother’s Day present. On the way, John spotted a black truck with big tires at a dealership and decided to take a closer look. He had been intrigued by custom vehicles since he was a teenager and smiles when he says, “Before I knew it, we drove off the lot with it! It was not exactly what my wife expected for a Mother’s Day gift.” The ’04 Ford F-250 Super Duty was just a basic truck with a 6-inch lift and 38-inch Super Swamper tires. Since the family enjoyed attending car shows, it was natural to occasionally enter the truck in the competitions, but John’s 11-year-old son, Koltyn, was disappointed that the cool family truck was not winning trophies. Before John could begin customizing the truck and bringing it closer to trophy-winning status, fate intervened and priorities changed. 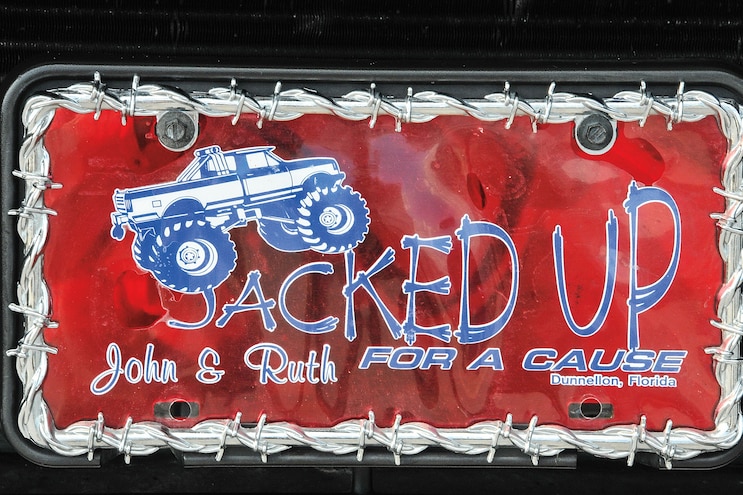 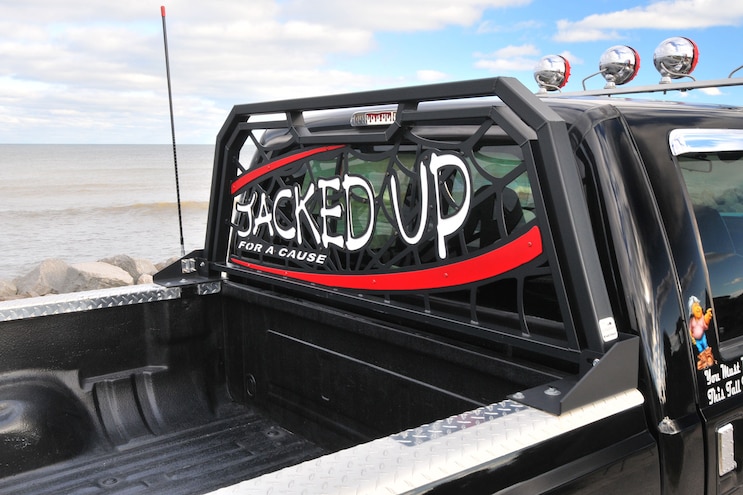 View Photo Gallery | 17 Photos
Photo 3/17   |   2004 Ford F250 Jacked Up Roll Bar
Ruth was pregnant with their next child, but unfortunately young Kody only lived for two days. Two weeks later, John caught his wedding ring on the back of a delivery truck, resulting in the loss of two fingers. The combination of events sent him into a deep depression. Their happy home was turning into a horror story, falling apart not only emotionally, but financially as well. Fortunately, some amazing people in the community came forward to help them get back on their feet, and the Shermans took it as an opportunity to pay it forward. Once back on track, they wanted to give something in return to the community that helped them through a very difficult time in their life. That’s how Jacked Up for a Cause was born. 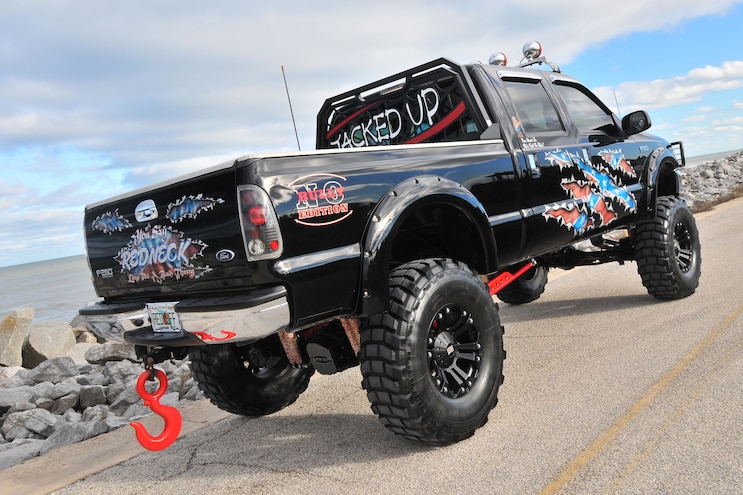 View Photo Gallery | 17 Photos
Photo 4/17   |   2004 Ford F250 Jacked Up Rear Three Quarter Low
The Shermans started an anti-bullying campaign as a result of experiencing it firsthand with young Koltyn. They were determined to make people more aware of the impact bullying has not only on the victim, but also on the family. Their goal was to educate the community on the signs to look for and the steps to take to report the problem, with a goal of preventing it from happening to others. As you may have guessed, the F-250 played a major role in their plan. View Photo Gallery | 17 Photos
Photo 8/17   |   2004 Ford F250 Jacked Up Steering Stabilizers
After its imposing size, the paintjob on the big Ford is the next thing you notice. The anti-bullying paint design transforms the truck into a rolling billboard that can be displayed at various events and school locations. It really does grab your attention. The original 6-inch lift is long gone in favor of an 11-inch conversion, achieved with taller leaf springs and shackles up front, along with springs, blocks, and Fabtech ladder bars in the rear. John custom-painted the Rancho 9000 shocks front and rear, as well as the pair of Fabtech shocks on the steering stabilizers. The big Ford rolls on 20x11 XD Monster series wheels and 43x14.50R20 Michelin X radials. Big wheels need big power, and fortunately, the big 6.8L V-10 under the hood was up to the task. It gets some extra help from an AEM cold-air intake, Superchips Power Programmer, 3.5-inch stainless steel exhaust, and Flowmaster mufflers. The 4R100 transmission sends power to both axles, turning 4.56 gears. Custom touches to the body include the fiberglass Good Hood and Westin Brush Guard front bumper, along with an elaborate lighting package that boasts Anzo headlights and Recon taillights, Street Glow neon, and a roof rack containing KC Daylighters. 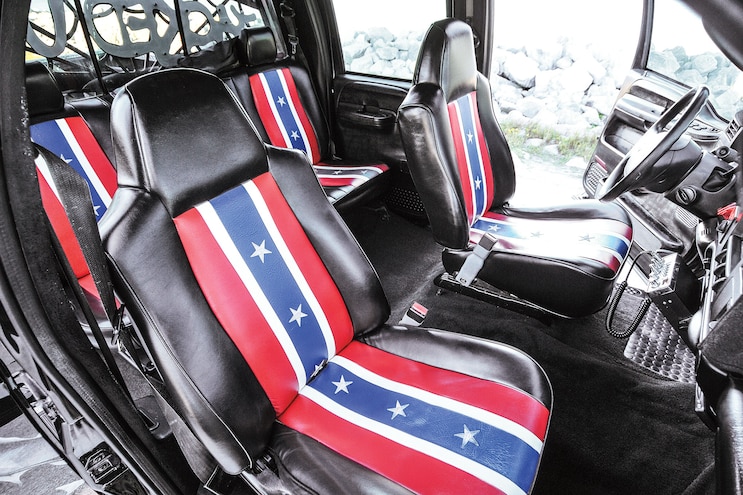 View Photo Gallery | 17 Photos
Photo 12/17   |   2004 Ford F250 Jacked Up Custom Interior Side View
The upgrades continued inside with a set of bucket seats up front and a split bench in the rear. Custom Car Crafters in Ocala, Florida, added the Stars and Bars vinyl upholstery theme to the seats and headliner. John chose vinyl because this good-looking truck is still working for a living in John’s landscape business. Upgrades continued inside with the Pioneer head unit controlling a 600-watt US Amp, sending power to four 6x9-inch speakers in the doors and two JBL 10-inch subwoofers. Future plans for the truck include a new paintjob and a lift mechanism for the bed (which John is hoping to design). That, along with bigger tires and a Kelderman air suspension, would draw even more attention to this rolling billboard and its worthwhile cause. 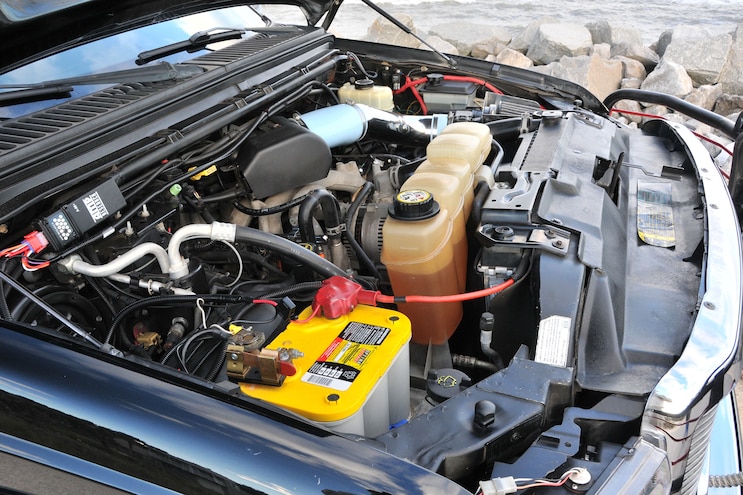 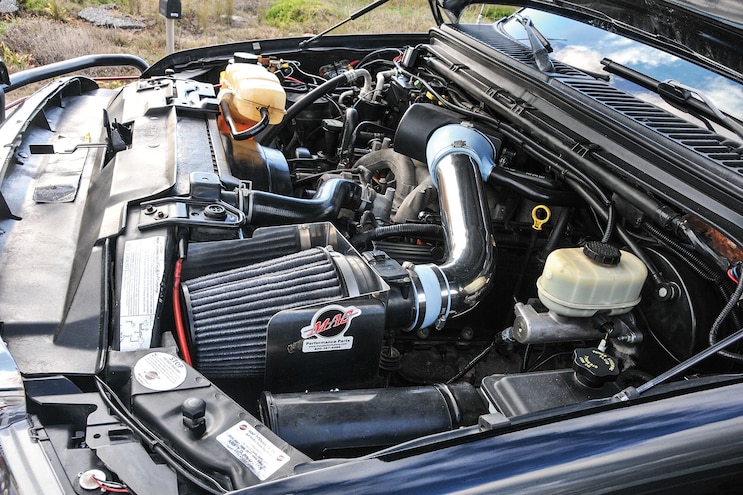