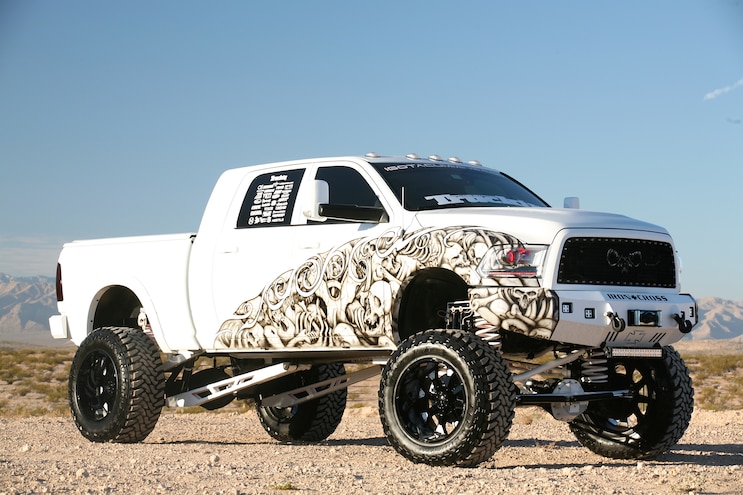 The term “black-and-white” can refer to many things. For some, it is a way to explain something simple. For others it can mean order and structure. In the worlds of photography and film, it is used to emphasize light and shadow. Black and white are opposites; two colors used in classical contrast. To use black-and-white as a color scheme for a truck build, you have to have all the components in harmony or one color will dominate instead of being complimentary. View Photo Gallery | 22 Photos
Photo 2/22   |   14 2011 Dodge Ram 2500 Black And White
Curtis Hicks was going for that exact effect with this ’11 Dodge Ram 2500 Mega Cab. By using only black and white throughout his truck and having the two colors play off each other to highlight both light and shadow, Hicks used that contrast to his advantage and drew attention to certain areas of the truck. 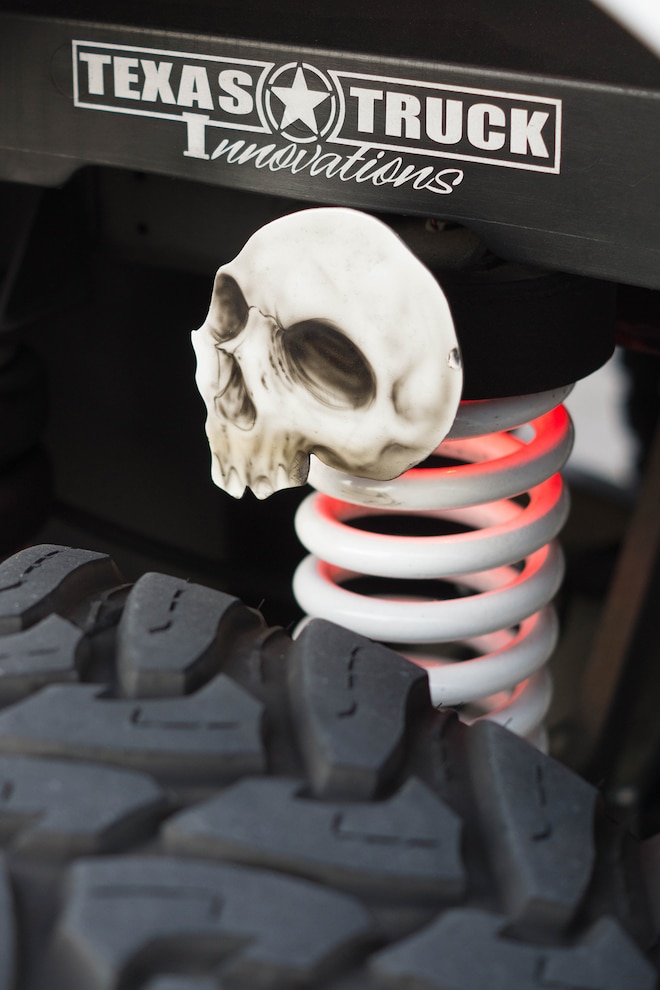 View Photo Gallery | 22 Photos
Photo 3/22   |   28 2011 Dodge Ram 2500 Black And White
The theme started with the first modification; the 16-inch Coast Customs lift was powdercoated white, as were the coils, track bars, and mounting clamps of the Fox 2.0 reservoir shocks. The front and rear diff covers also received a coating of white, while all the other components and frame became deep black. In the rear, a four-link keeps this beast firmly planted, and a set of Firestone helper ’bags all around maintain a nice and smooth ride. This 2500 rides around in style on 22-inch Fuel Hostile wheels shod in 40-inch Toyo Open Country tires. 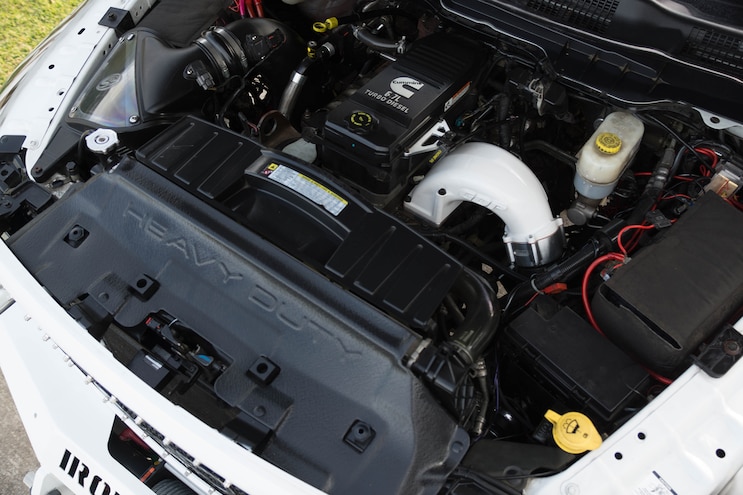 View Photo Gallery | 22 Photos
Photo 4/22   |   27 2011 Dodge Ram 2500 Black And White
The 6.7L Cummins blows out the horsepower fine, but gets a jolt from MBRP boost tubes, a H&S EGR delete kit, an S&B cold-air intake, a H&S mini max, and a Glacier intake horn, which was powdercoated white. It gets its electricity through two XS Power D4800 batteries and exhales through a 5-inch MBRP exhaust. 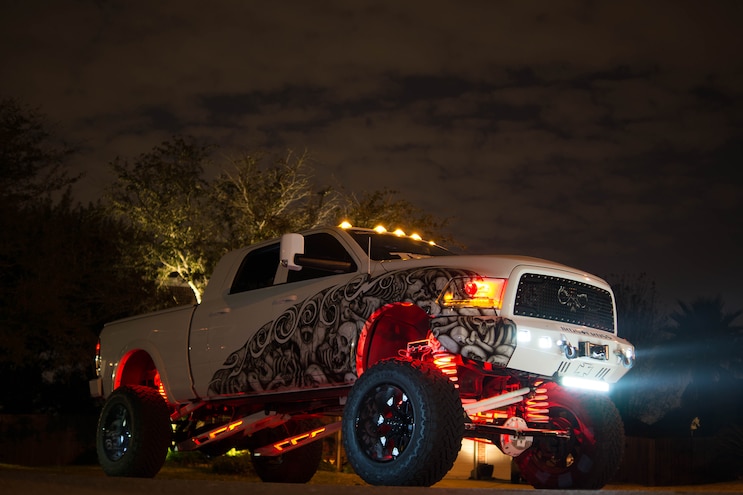 View Photo Gallery | 22 Photos
Photo 5/22   |   30 2011 Dodge Ram 2500 Black And White
The exterior is the most attention-grabbing surface—not an inch was wasted. Front and rear Iron Cross bumpers were powdercoated white, to carry the theme, as the front was fitted with a Mile Marker 15,000lb winch, a 30-inch lightbar, and four 4-inch cubes, while the rear reverse lights get illumination help from a 12-inch lightbar. A custom-built Royalty Core grille menaces rearview mirrors and those at eye level with a goat skull emblem. Bookending the grille is a pair of paint-matched Rekless Rydes headlights. With entire body given an all-white treatment, it left a blank canvas for Eric Contreras to do apply his intricate airbrushing, seen as an overlapping landscape of skulls and bones rising up the bumper flanks, flowing through the headlights, and down either side of the truck, terminating just under the lower edge of the passenger doors. 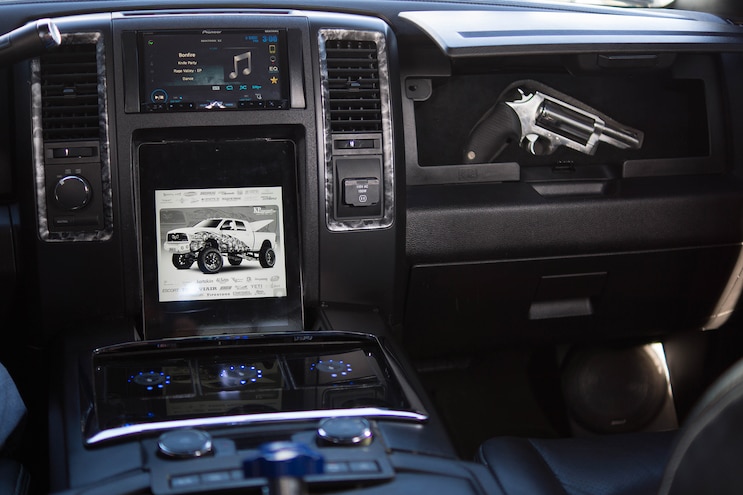 View Photo Gallery | 22 Photos
Photo 6/22   |   23 2011 Dodge Ram 2500 Black And White
The interior of the Mega Cab is finished in black Katzkin leather that features white stitching. “Big Dreams” is stitched into the seatback and a Toray Ultrasuede headliner was installed. Contreras also let loose on the, spraying all available surfaces with more skulls and bones, including the A/C and door panels. A custom center console has a bank of D’Amore Audio Gauges, their sweeping light displays reading out the audio levels. The glove compartment has a hidden surprise; it has been converted to house a handgun safely under a lockable door. 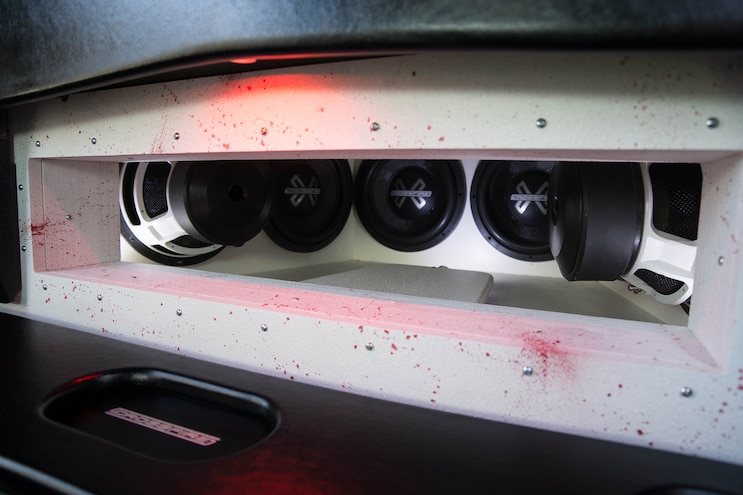 View Photo Gallery | 22 Photos
Photo 7/22   |   25 2011 Dodge Ram 2500 Black And White
Another huge component of Big Dreams is the big sound that pumps out of the AVH-X8500BHS Pioneer and CrossFire Car Audio powered system. Three 800.4 amps for the mids, three 1700 D amps for the subs, eight 6-inch separates in the doors, six 1-inch tweeters, and six 12-inch subs in a blow-through to the bed gives this monster system a total of 152.2 ear shattering decibels. It draws power from four XS Power D3100 batteries mounted in the bed.
Our hats go off to Hicks, Rekless Rydes, and Texas Truck Innovations creating this color scheme. It is often used, but is rarely pulled off as cleanly as it is here. As a final surprise, when the sun goes down, the Ram light up, and emits an ominous glow. Sometimes, things aren’t always black-and-white! 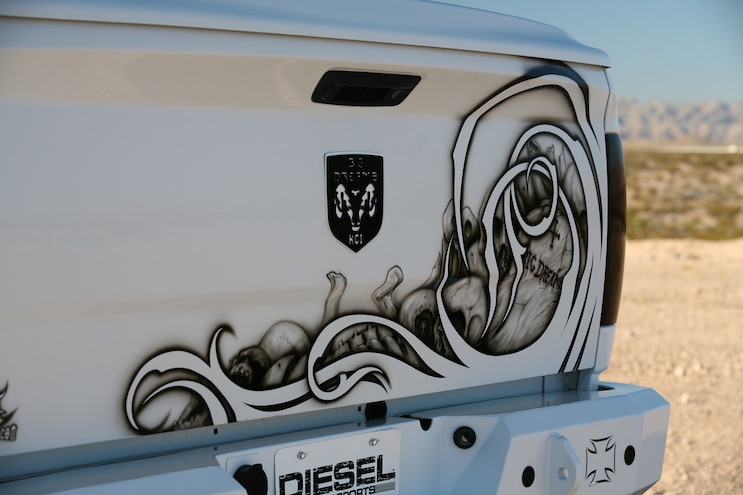