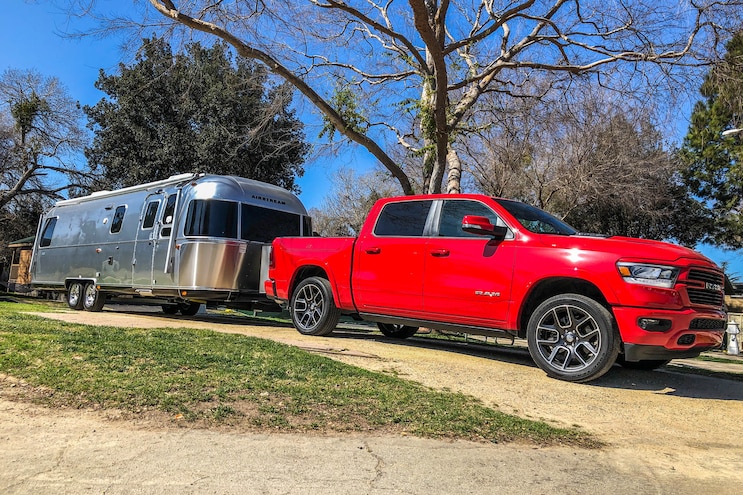 One of the biggest areas of concern for most pickup owners and prospective buyers is just how well the truck can tow. Sure, most -ton owners rarely hitch up to a trailer, but nonetheless, it seems everyone would like to have a truck with the ability to haul a load should the need arise. Because of this, one of the things we like to do with each of our long-term test vehicles is to push the limits of their individual towing capabilities. All in the name of science, of course.
Our 2019 Ram 1500 is equipped with the company's 5.7L Hemi V-8 engine, which is also fitted with the eTorque mild-hybrid system. According to Ram's vehicle VIN-specific towing guide, this truck can tow 11,246 pounds (and has a payload rating of 1,346 pounds). That high towing figure can be attributed to the truck's optional 3.92:1 axle gears. Towing capacity of our truck would have been around 8,100 pounds if we'd ordered it with the standard 3.21:1 axle gears (it also would get better fuel economy, so there's the trade-off). 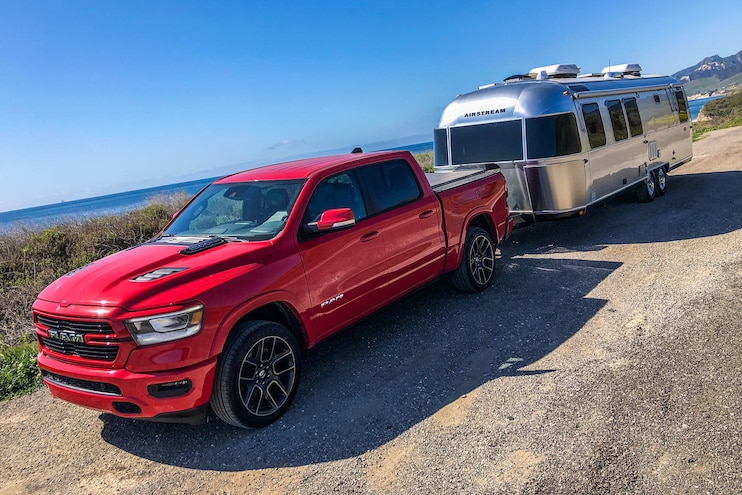 View Photo Gallery | 8 Photos
Photo 2/8   |   Our 2019 Ram 1500 Laramie Sport is rated to tow a whopping 11,246 pounds.
To give the Ram a good test we rang our friends at Airstream and borrowed nearly the largest travel trailer in their fleet. What we hitched up was a 2020 Airstream Classic 30FB. At 31.5 feet long, the trailer tips the scales at just under 8,000 pounds dry. This means that after filling the trailer with water and gear for a weekend trip we were closer to the trailer's 10,000 Gross Vehicle Weight Rating than not. And once we'd added the extra people in the cab (Ram's figures are based on 300 pounds in the cab) and stuff in the bed, we were loaded right at the truck's gross combined weight rating (total weight of truck and trailer).
Skipping straight to the punchline, the Ram towed amazingly well. The optional four-corner air suspension kept the truck and trailer perfectly level as the rear air suspension easily compensated for the additional load. Power was outstanding; the truck easily accelerated off the line and even when passing of slower vehicles. We picked our test route because it contains two large grades we'd have to climb and descend. Going up, the truck had no issues. In the past we'd towed trailers of similar size up these grades, foot to the floor, barely holding 45 mph. With the Ram, though, we cruised up in fourth gear, part throttle, pulling 65 mph and climbing. Coming down the passes we were able to keep the load in control by manually selecting lower transmission gears via the steering wheel controls. The truck stayed in gear and kept a constant speed with minimal need for the service brakes, which is quite impressive with a load of that size. 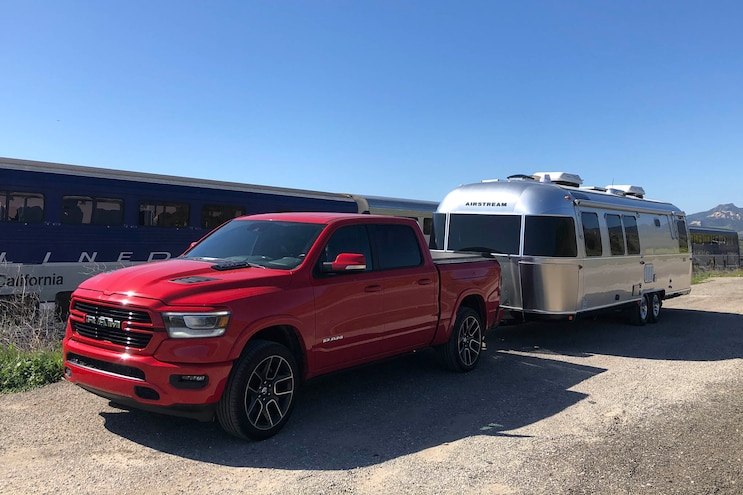 View Photo Gallery | 8 Photos
Photo 3/8   |   The 2020 Airstream Classic weighs just shy of 8,000 pounds dry and right at 10,000 pounds fully loaded.
Fuel economy while towing wasn't terrible. We managed to average 9.33 mpg on the trip out and 9.79 mpg on the way back (there was less traffic heading back to the office). Compared to our normal 14 mpg average, we were quite impressed. The only drawback we found was the total range was short due to the truck's relatively small fuel tank. At just 26 gallons that's a range of roughly 240 miles while towing. Had we thought better we would have fitted the truck with the optional 33-gallon tank.
Another bright spot in towing with the Ram 1500 was the automatic blind-spot alert. The truck's blind-spot monitoring system automatically detects a trailer and determines its length. At 30 feet the Airstream Classic was on the longer end of bumper-pull trailers in general. The Ram had no issue detecting its length, and the blind-spot monitoring worked amazingly well. 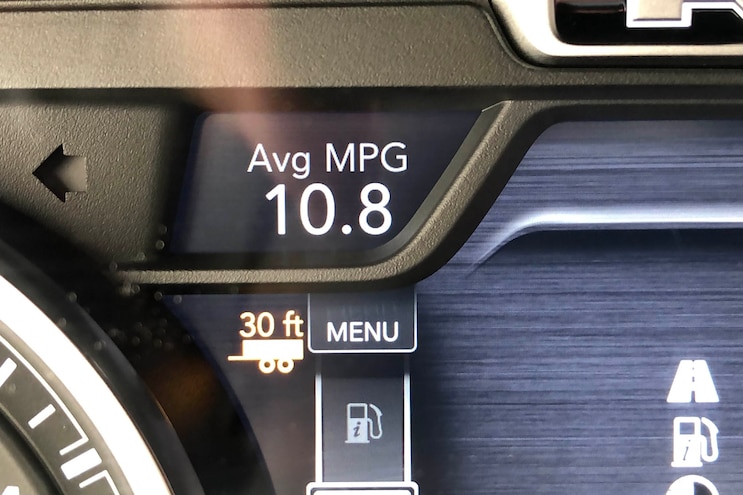 View Photo Gallery | 8 Photos
Photo 4/8   |   Most impressive to us wasn't the power or performance while towing, rather the blind spot monitoring system. The system automatically detected the length of the trailer and worked flawlessly on the highway.
While we have had our ups and downs about the optional four-corner air suspension, for towing it worked out quite well. We amazed our friends by lowering the truck to entry/exit mode, backing under the trailer tongue using the truck's cameras, and then raising the truck into position to hitch the trailer all by itself. It's not only convenient but quite the party trick, as well. We were also happy to see that when in tow/haul mode the suspension stays in normal height regardless of speed.
Overall, we were totally impressed with how well the 2019 Ram 1500 towed. For those needing to tow a 10,000-pound trailer on an occasional or semi-regular basis we wouldn't hesitate to recommend this truck, 22s and all. 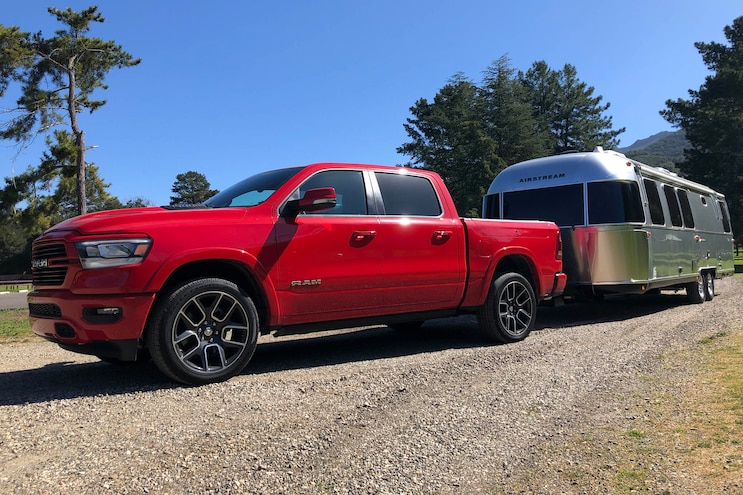 View Photo Gallery | 8 Photos
Photo 6/8   |   While we get tons of compliments on the Ram truck, towing an Airstream brought the attention level through the proverbial roof! 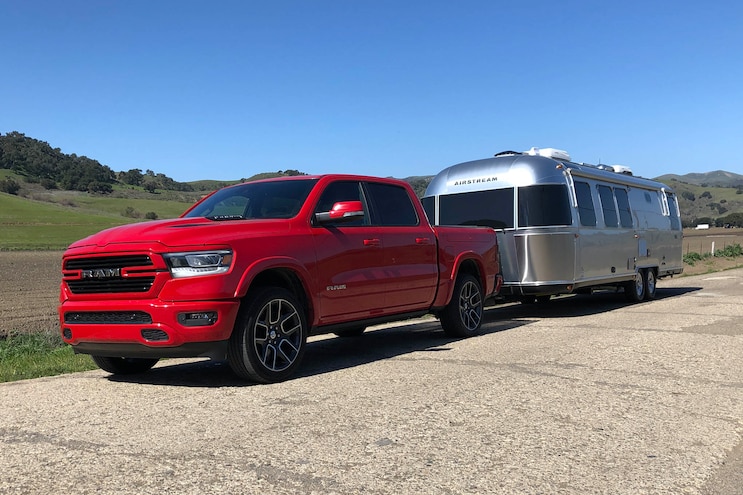 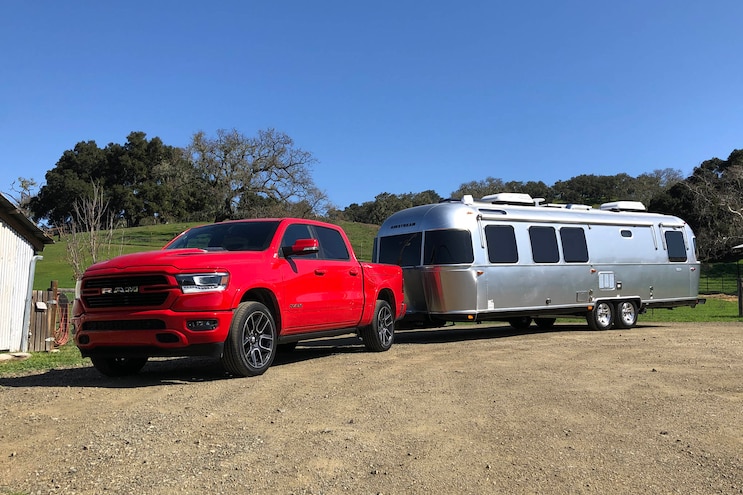 View Photo Gallery | 8 Photos
Photo 8/8   |   Towing made us wish we would have opted for the larger 33-gallon fuel tank, our 26-gallon tank had us cruising into the fuel station on fumes.