Playing in the sand… stateside. 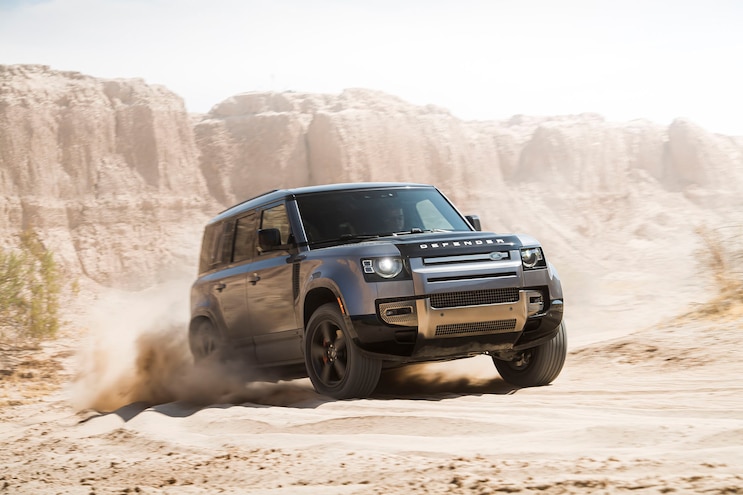 Well, here we are. Nearly a year after Land Rover first debuted the all-new 2020 Defender 110 at the Los Angeles International Auto Show, and we finally get to slide behind the wheel. Why such a long wait, you ask? While some of our counterparts had the opportunity to drive the Defender in Africa at the end of 2019, our planned expedition through the U.K. countryside got derailed when the pandemic began sweeping through the world. Now, seven months later, Land Rover brought the Defender to our backyard for us and a small group to sample in the Southern California desert.

We'll spare you all the nitty details; instead, if you're interested in learning all about the all-new 2020 Land Rover Defender you can jump over and read our First Look. Our time behind the wheel of the Land Rover Defender was relatively short but definitely action packed. The Defender we would pilot for the day was a 2020 Defender 110 SE in Pangea Green and optioned up to a sticker price of $72,180 including delivery and destination charges. Under the hood was stuffed the company's 3.0L I-6 mild hybrid engine that sports a turbocharger and electric supercharger. This engine pumps out an impressive 395 hp and 406 lb-ft of torque.

Starting out on the highway, it was remarkable how composed the Defender was. Power from the P400 engine is plentiful, and the ZF eight-speed automatic transmission is as impressive as ever. Ride quality is comfortable, thanks in part to standard four-corner air suspension. And the cabin is impressively quiet. The Defender is still a large, boxy SUV, so don't think you'll be carving tight twisty mountain roads with ease like some of its Range Rover brethren, though. 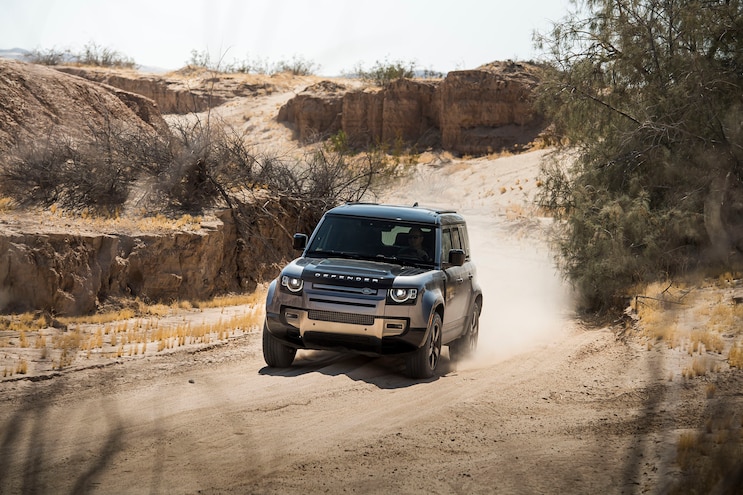 The Defender continues the legacy of one of our largest complaints with Land Rover vehicles the infotainment system is downright difficult to use. With each new iteration we hope for the best. And, to be fair, they have been getting better with time. However, the system in Defender has gone nowhere but backwards. The touchscreen is difficult to navigate and slow to respond. We've gotten used to dash buttons serving multiple functions; however, when paired with a slow response time we often found ourselves frustrated. Selecting Terrain Response modes was a perfect example, with us frequently either selecting the incorrect mode or having the system time out while making our selection. We also had issues using Apple CarPlay and found selecting audio channels and presets to be quite difficult. In addition, the gear shift lever, which is located on the left side of the center stack, blocks access from the driver to the selection knobs and touchscreen. After a couple hours we all but gave up on adjusting audio settings or drive modes.

With that little quibble out of the way we can get back to the good stuff, and that's pretty much everything else about Defender. We found the seating position to be comfortable with great visibility. The interior treatments were modern and upscale. We found tons of thoughtful storage spaces throughout the vehicle. And it was a downright joy to drive. The lane departure warning system was a bit overactive, but that seems to be par for the course these days. 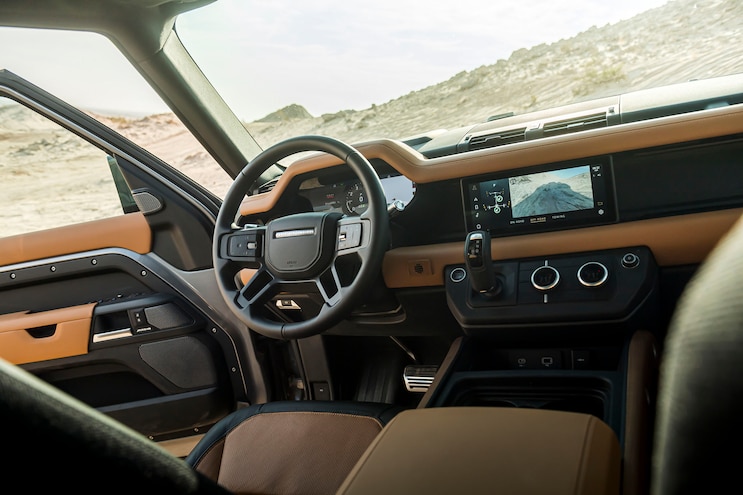 One final complaint, if we shall, was the fact that our $72,000 test rig did not come with ventilated seats. Normally this wouldn't be quite the deal breaker, but during our abnormally warm 113-degree (we saw spikes up to 118 degrees) day in the Anza-Borrego Desert just north of the U.S.-Mexico border we were really wishing and hoping for all the coolness that could be found.

After an hour or so on the highway we turned off into the desert, and let us tell you, this is where the Defender really started to shine. We've been playing in these Southern California deserts for decades, so to say we knew the terrain well would be a bit of an understatement. When we hit the dirt, Land Rover had us put the Defender's Terrain Response II system in low range and the highest air suspension setting. We disagreed with this but were good lemmings and did what we were told. That said, even in the highest suspension setting the ride was comfortable and we didn't notice the harsh bottoming sensation we've become accustomed to with air suspension systems.

We logged quite a few miles off-road, running on desert two-track, graded trails, deep sand washes, and eventually large sand dunes. We eventually got the Defender out of low range, put the ride height back to normal, and got the Terrain Response system into Sand mode. That's when the fun began. The suspension felt great over all but the largest of bumps and dips, and despite having relatively mild tires (that were aired up to full street pressure) the Defender never felt as if it were lacking traction. And with nearly 400 hp on tap, we were able to slide corners when desired and even hang the tail out a bit. 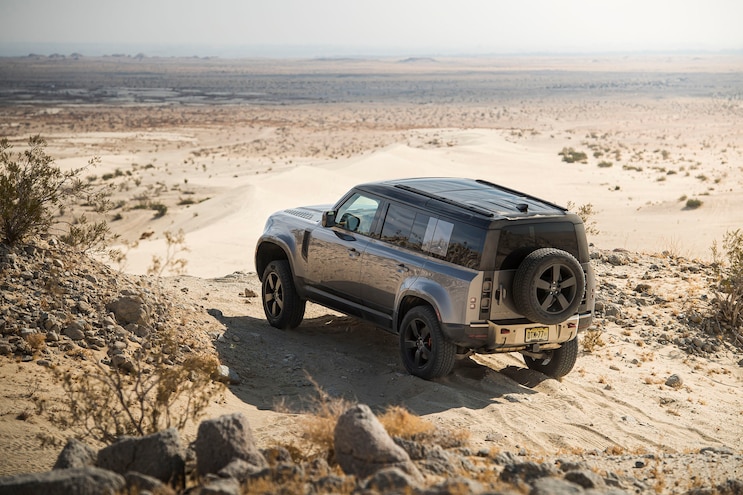 Land Rover always has a way of getting tires way higher in the air than one would think was humanly possible, and this time was no different. The team found a crack in the desert that allowed us to flex the Defender's suspension to the max, and then some. Being a four-wheel independent suspension vehicle with air suspension, we knew that articulation wouldn't quite rival that of, say, a Jeep Wrangler, but it was fairly impressive, nonetheless. While this type of driving isn't typical and would cause quite the pucker for the uninitiated, it's still quite fun.

Finally, we let loose in the sand dunes. With loads of power on tap the Defender ripped up the dunes like no one's business. A few in our group managed to bury their rides in the sand, but that was more driver error than a fault of the vehicle. We literally could have driven the Defender in the dunes all day; it was that much fun.

Back on the highway, we had time to unpack all that we had done that day. The bottom line is the all-new 2020 Land Rover Defender is a true jack of all trades that has mastered most of them. The Defender is comfortable on the highway, packs potent power under the hood, and is a competent off-roader in nearly all terrains (though we still probably wouldn't rockcrawl with it to save the tires and rocker skins). Exterior styling is a bit polarizing, but we certainly dig it. Our big wish would be for a less expensive entry into the Defender, but with the shorter two-door Defender 90 coming for 2021, that might just satisfy our desire.