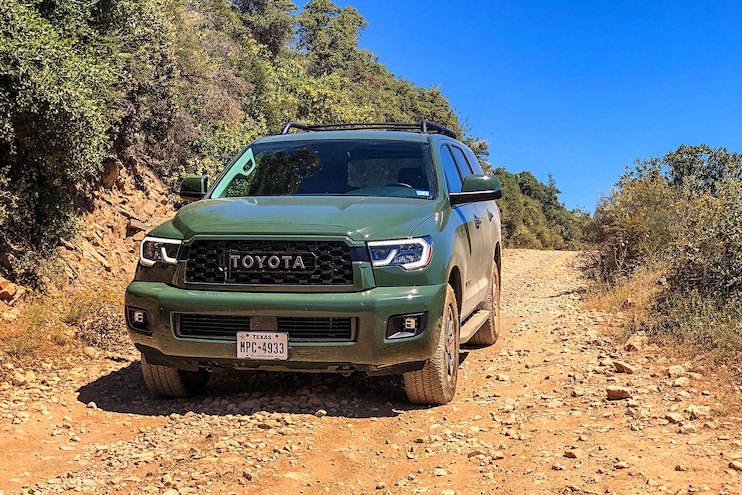 Since Toyota first introduced the TRD Pro trim on Tacoma in 2015, consumers have been clamoring for more and more off-road-specific models. Alongside Tacoma, Toyota also launched a TRD Pro version of 4Runner (which, at the time, shared suspension bits with Tacoma) and Tundra. Through the subsequent years, Toyota has continued to update and improve the TRD Pro lineup. Shocks changed from Bilstein to Fox, skidplates were added, and tires were improved. More optional features were added to the list, such as a desert air intake and performance exhaust. However, the one thing that remained the same is the three-vehicle lineup. That is, until now.
For 2020 Toyota announced a fourth member of the TRD Pro family, the seven-passenger Sequoia SUV. Following in its pickup sibling's footsteps, the Sequoia TRD Pro offerings mirror those of the Tundra TRD Pro almost exactly. The standard dampers are swapped out for more robust aluminum-bodied performance units from Fox. Front coilovers are a 2.5-inch internal bypass that feature seven compression and two rebound zones. The rear shocks are 2.0-inch monotubes with a piggyback reservoir. The Sequoia TRD Pro also has a reduced front spring rate than that of a normal Sequoia for enhanced off-road performance. 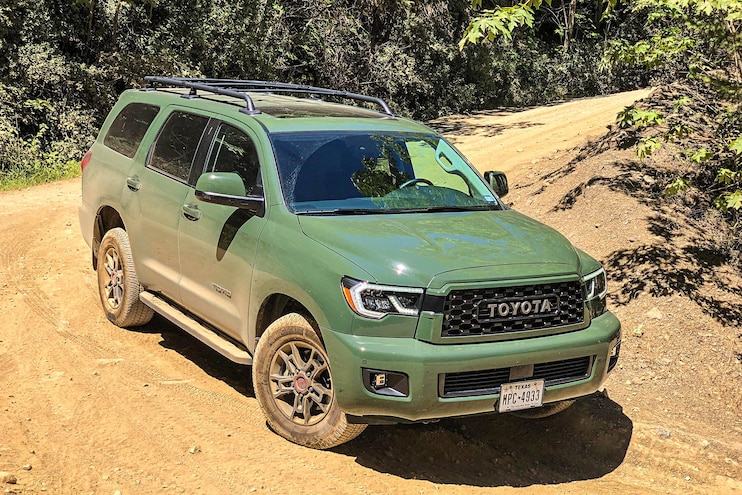 View Photo Gallery | 33 Photos
Photo 2/33   |   002 2020 Toyota Sequioa Trd Pro Daily Driven
Also adorning the Sequoia TRD Pro is a lettered "Toyota" grille, Rigid Industries LED foglights, and black forged aluminum BBS wheels. The Sequoia TRD Pro also comes fitted with black cast aluminum running boards, an aluminum front skidplate, and black roof rack. TRD Pro embroidered front seat headrests and exterior badging let the world know that this is no ordinary Sequoia. Fitted to our test vehicle was the available TRD performance exhaust system. TRD Pro all-weather floormats round out the package.
Much like the Tundra, the Sequoia has been largely unchanged since its last major update in 2007. A moderate face-lift occurred in 2018, though much of the vehicle's bones remain the same. Under the hood is a 5.7L iForce V-8 engine that produces 381 hp and 401 lb-ft of torque. The engine is backed by an eight-speed automatic transmission. All TRD Pro models are four-wheel drive with a two-speed transfer case and an electronic locking rear differential. During our time with the Sequoia we found the engine power to be plenty sufficient for daily living as well as trail running. We've been fans of Toyota's 5.7L V-8 engine for a long time and found it to be right at home under the hood of the Sequoia. The eight-speed transmission shifted smoothly, and we were never able to trip it up. We also appreciated the ability to use the rear locking differential in two-wheel high (though we wish it were available in two-wheel drive, as well). The EPA rates the Sequoia at 13 mpg city, 17 highway, and 14 combined. Over the course of 264 miles we averaged 13.66 mpg, which is close enough to the EPA combined rating to make us happy. 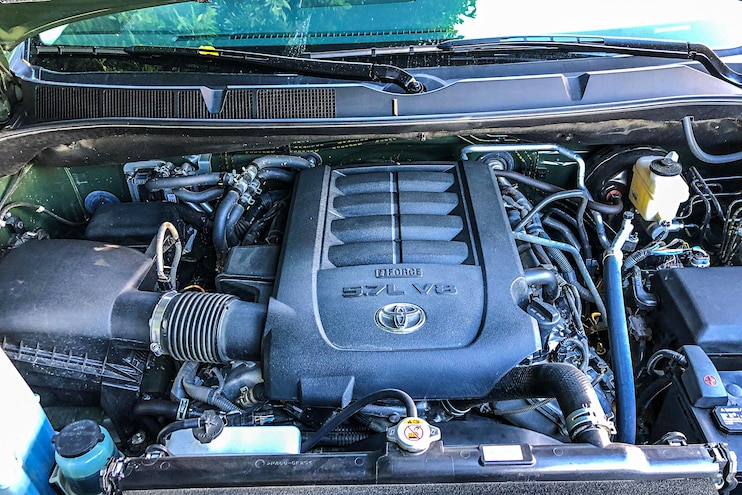 View Photo Gallery | 33 Photos
Photo 3/33   |   033 2020 Toyota Sequioa Trd Pro Daily Driven
Also new for 2020 is that Toyota Safety Sense+ (TSS-P) is now standard across the full lineup of Sequoia models, TRD Pro included. These features include blind spot monitoring, rear cross-traffic alert, pre-collision warning with pedestrian detection and automatic braking, lane departure alert, automatic high-beams, and adaptive cruise control. We didn't have a chance to use all of the safety features, thankfully. However, the ones we did sample worked as advertised. If we had one gripe, be it a small one, we'd like for the blind-spot monitoring to be a bit more responsive.
The TRD Pro (and Platinum) trim comes equipped with the premium JBL with Clari-Fi audio system. This comprehensive system features 14 speakers, dynamic navigation, dynamic POI search, and dynamic voice recognition. We enjoyed using this system, but our biggest complaint was the relatively small size of the touchscreen. Being undersized for the vehicle, and an arm's reach away from the driver, made making adjustments on the fly difficult at times. 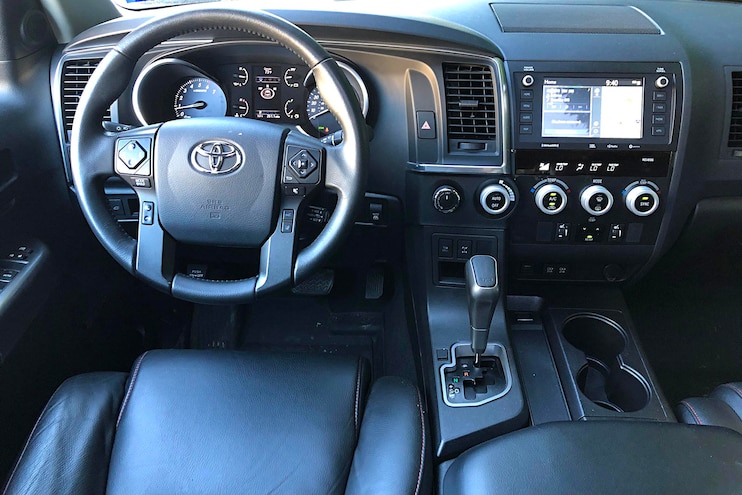 View Photo Gallery | 33 Photos
Photo 4/33   |   017 2020 Toyota Sequioa Trd Pro Daily Driven
One word that best describes the interior is cavernous. The interior is huge. There is loads of space for the second- and third-row occupants, and the driver and front passenger feel like they're miles apart. There are storage cubbies all over with some of them being quite large. Seating surfaces are firm yet comfortable and didn't give us the same driver fatigue other vehicles have in recent testing. If forced to choose a second descriptor word, it would need to be dated. You can really tell that the interior hasn't seen a major update in quite a few years. It's not necessarily a bad thing, though, as there are plenty of reliable knobs and buttons for controlling things such as the HVAC and infotainment systems.
We're sure by now the big question on everyone's mind is, how does it drive? Well, that's a tricky question to answer. On the highway it was decent. The Sequoia handled all types of pavement well, from broken concrete to smooth asphalt. Its Fox shocks dampened the ride quite well, though we noticed a touch of wallow at times, likely from the lighter front spring rate. The test vehicle that we had also exhibited some weird steering quirks where it would wander in the lane and required a fair bit of driver input to continue straight. While it didn't feel like an alignment issue, we're not ready to blame the breed quite yet as our vehicle had almost 10,000 certainly hard miles on it. 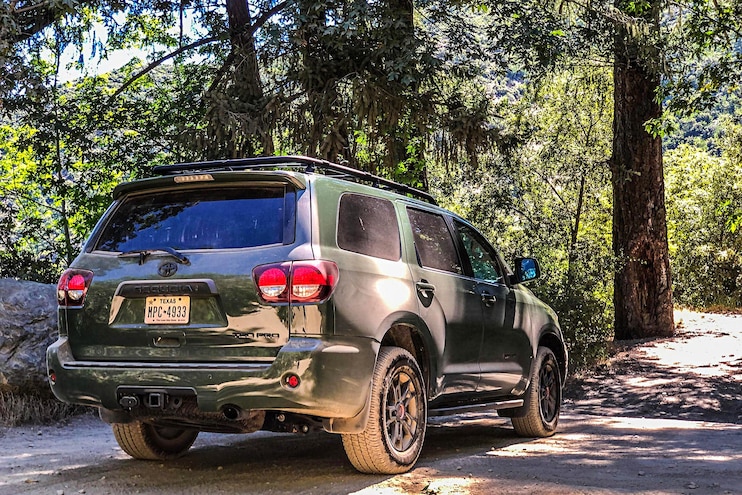 View Photo Gallery | 33 Photos
Photo 5/33   |   006 2020 Toyota Sequioa Trd Pro Daily Driven
Off-road is where the Sequoia TRD Pro really shines, as if that should surprise anyone. Once we got past the notion that the large, 6,000-pound, SUV wasn't going to be quite as nimble as a Tacoma, we really started to have fun. The Fox shocks work wonderfully at damping small to medium-size bumps, holes, and ruts. Graded dirt roads are a no-brainer, and even loose shale and rock is hardly a match for the Sequoia. Big whoops, bumps, and dips will need to be taken slowly, and a hard-core rock crawler it is not. With a low-range and a locking differential the Sequoia TRD Pro will get you deep into the backcountry, through snow, mud, and more. It may not be the quickest in the dirt, but it sure beats ridding in a normal SUV.
If we were to find something to quibble about regarding off-road capability it would involve the rear shocks and the tires. We noticed a lack of rebound control from the rear shocks, likely due to the vehicle's sheer size. Stepping up to a 2.5-inch rear shock from Fox would almost certainly allow the rear rebound to be dialed in perfectly. And while the tires match those of the Tundra, we'd like to see something with a bit more meat offered. The Michelin LTX AT2 tires are far more street oriented than we would like on a dedicated off-roader. Our first, and only, modification if we were to buy a Sequoia TRD Pro would be to swap on a set of Goodyear DuraTrac or BFGoodrich AT tires. 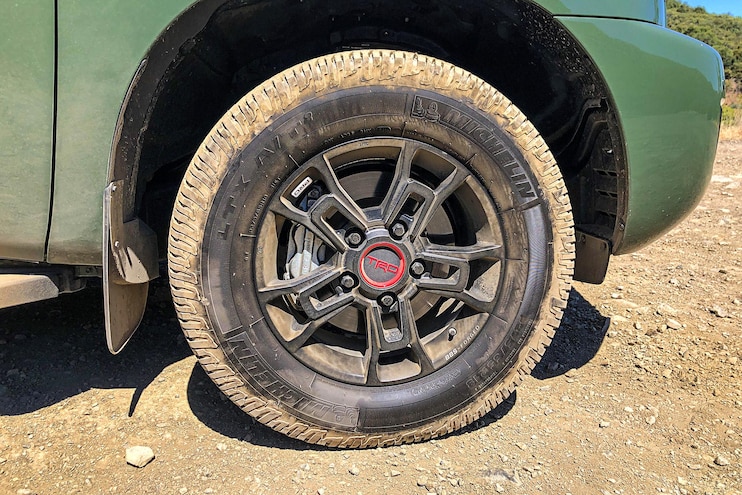 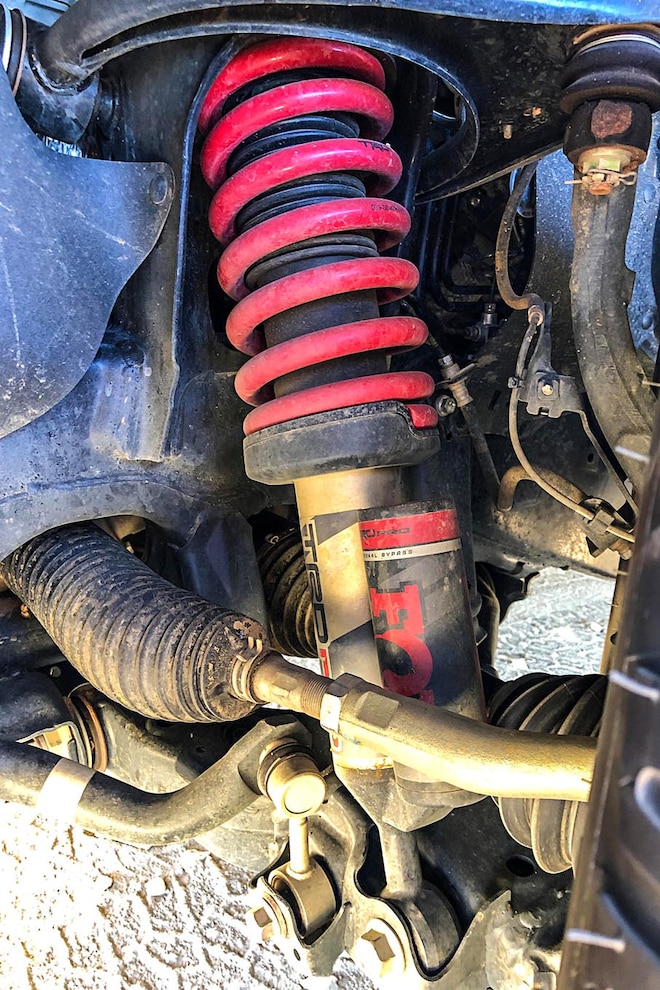 View Photo Gallery | 33 Photos
Photo 7/33   |   012 2020 Toyota Sequioa Trd Pro Daily Driven
Overall, we enjoyed our short time with the 2020 Toyota Sequoia TRD Pro. The vehicle is definitely in need of a wholesale refresh, but its old and familiar charm wasn't lost on us. It's got a great mix of modern safety features and amenities, while not feeling like you're driving an iPad. The off-road hardware is great and will get families deep into the woods on just about any adventure one could dream up. While it may not win a race in Baja, throw a tent on the roof and a fridge in the back, and you've got one heck of an overland rig, right off the showroom floor.