Is The Plug-In Hybrid 4xe The Best Jeep Wrangler Ever? 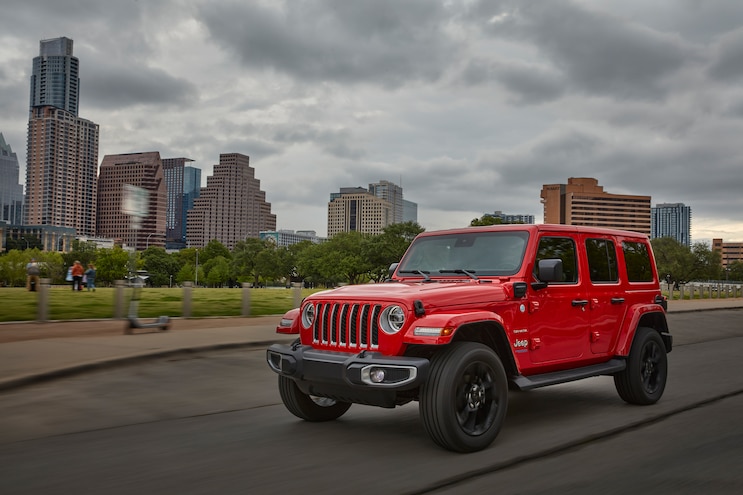 As the newest, and arguably most exotic, drivetrain in the Wrangler lineup we were excited to finally get to jump behind the wheel of the new 2021 Jeep Wrangler 4xe (pronounced four-by-e). Being a plug-in electric hybrid, the Wrangler 4xe combines the company's already fabulous turbocharged 2.0L I-4 engine with an electric motor and a 17 kwh lithium-ion battery. The electrification method used for the Wrangler 4xe is rather unique, as it employs a specially designed 8-speed ZF 8P75PH automatic transmission with, in simple terms anyway, an electric motor and pair of clutches in place of a traditional torque converter. Engine power and motor output combine to produce a rating of 375 hp and 470 lb-ft of torque, making the 4xe the second most powerful Wrangler behind the 6.4L V-8 powered 392 model, which churns out 470 hp and 470 lb-ft.

How Does The Wrangler 4xe Drive On Just Electricity?

To the big question at hand, how does the first ever hybrid-electric Jeep Wrangler work in the real world? In short, it's pretty darn amazing. The vehicle that we were given to experience the 4xe was a Rubicon Unlimited with a soft top, however Jeep is also offering the 2021 Wrangler 4xe in the Sahara and High Altitude trims as well. All Wrangler 4xe trims are four-door Unlimited models.

Setting out we first had a few dozen miles of dense city driving along our route through downtown Austin, Texas, to the day's off-road location. Jeep had us place the Wrangler 4xe into pure electric mode (the 4xe has three modes, Electric, Hybrid, and E-Save) for this portion of the drive. Rated at an EPA maximum of 21 miles purely on electricity, we headed out to see just how close we could get. We started with only 94-percent of battery life to work with and through dozens of stop lights, lots of stop-and-go, and even some traffic, we managed to drive 18.8 miles before the gasoline engine kicked on. Doing some basic math, if we had started with a full charge the rated 21 miles wouldn't have been difficult to achieve. We're also pretty certain that in more ideal driving conditions, meaning fewer accelerations and more steady-speed driving, we could have busted straight through the 21 mpg EPA rating. Jumping into a Sahara model with a slightly lower ride height and more street oriented tires should return an even greater electric range still.

It was a slightly eerie experience driving essentially an electric Wrangler. With no engine noise and a soft top you hear everything except the engine, obviously. So, while you would think it would be quite a bit quieter inside, we quickly noticed how not quiet the highway surroundings actually are. Those with hard tops reported a slightly different experience, with a more calm and serene drive in Electric mode. Our ideal Wrangler 4xe would have the Sky One-Touch power top, which combines the best of both hard and soft tops.

Although the 2021 Jeep Wrangler 4xe is rated at 375 hp and 470 lb-ft of torque, in Electric mode that number is significantly less. The electric motor receives a peak rating of 134 hp and 181 lb-ft of torque (the eTorque starter/generator motor can produce 44 hp and 39 lb-ft), a number that fluctuates based on battery voltage. We bring this up because driving the Wrangler 4xe in Electric mode really feels like driving a 134 hp, 5,200-pound, Wrangler. It is not quick off the line and the gasoline engine is quick to jump in and help on anything besides flat ground and part throttle. That's not to say it's at all bad, however, if you jump in expecting Tesla speed you might leave disappointed. 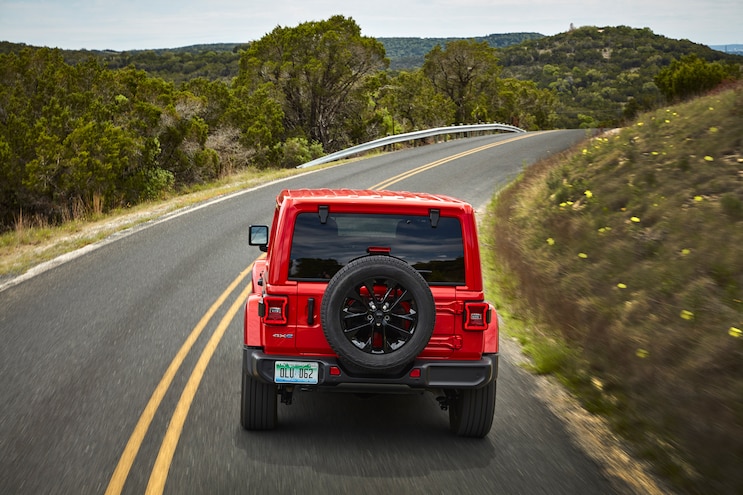 The default drive mode for the 2021 Jeep Wrangler 4xe is Hybrid. This mode uses a combination of the turbocharged 2.0L gasoline engine and electric motor as needed and favors electric-only driving when possible. It's in Hybrid mode that the Wrangler 4xe produces its maximum power output of 375 hp and 470 lb-ft of torque. And if that torque figure sounds familiar it's because it's shared with the V-8 equipped Wrangler 392, which costs about $15,000 more than a comparable Wrangler 4xe.

Driving in Hybrid mode the Wrangler 4xe was the most pleasurable Jeep Wrangler we have driven to date (full disclosure: this author has not driven the Wrangler 392). Under prime conditions, Jeep estimates that the Wrangler 4xe will run from 0 to 60 mph in less than 7 seconds, and from behind the wheel it feels like they aren't far off. The Wrangler 4xe is quick off the line and with zero felt turbo lag thanks to the electric motor's smooth application of torque right off idle. Passing is easy as well thanks to the enormous power of the combined drivetrain. The 8-speed automatic transmission shifted incredibly smooth, only acting up at low speeds. Because the transmission uses an electric motor and two clutches instead of a traditional torque converter, the Wrangler 4xe at times felt like a dual-clutch automatic transmission equipped vehicle (or to a lesser extent a manual transmission) when rolling to a stop.

The Wrangler 4xe also has the ability to ramp up the regenerative braking function, which allows the driver to essentially drive with one pedal. With the added regenerative braking turned on, when the driver lifts off of the accelerator the electric motor is used to slow the vehicle while also generating electricity to be sent back to the battery. With a little practice it's entirely possible to do most of your braking without ever touching the brake pedal. However, because the Wrangler 4xe is a hybrid and not a battery electric vehicle pure one pedal driving is not available, and the brake pedal still needs to be depressed to come to a full stop. 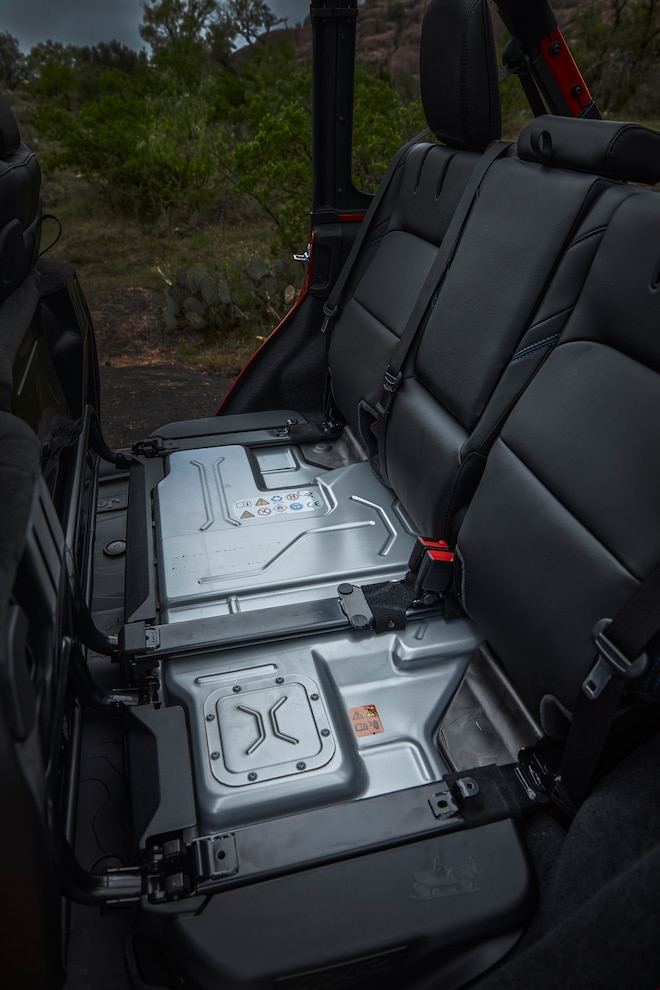 Saving Electricity When Wanted - Generating It When Needed

Driving in the third drive mode, E-Save, does exactly what the name implies, it saves electricity. There are two functions of E-Save mode, which can be toggled in the Uconnect system: Save and Recharge. When the Save function of E-Save is selected the Wrangler will use only the gasoline engine, saving battery power for later. For example, if you wanted to do your favorite trail in Electric mode, but it was more than a 20-mile drive from home. You could put the Wrangler in E-Save, drive to the trail, and then switch to Electric.

The second function of E-Save is Recharge. When Recharge is selected it, you guessed it, recharges the battery pack. Using the same example, when your day on the trail is done and you're heading home you can put the Wrangler in Recharge and it will use the gasoline engine to add power back to the battery for use later.

During our time with the Wrangler 4xe we used Electric mode to get out of the city, and once the battery pack was depleted, we swapped into E-Save with the recharge function enabled. We had about a 100-mile highway drive to get to the trail, which allowed us to gain back a bit more than 40 percent of battery power, good for 8 miles of all-electric off-road driving when we arrived. While it may not be the most efficient way to recharge the battery pack, it sure came in handy in our case during a period of driving that would have been cruising on the gasoline engine anyway. 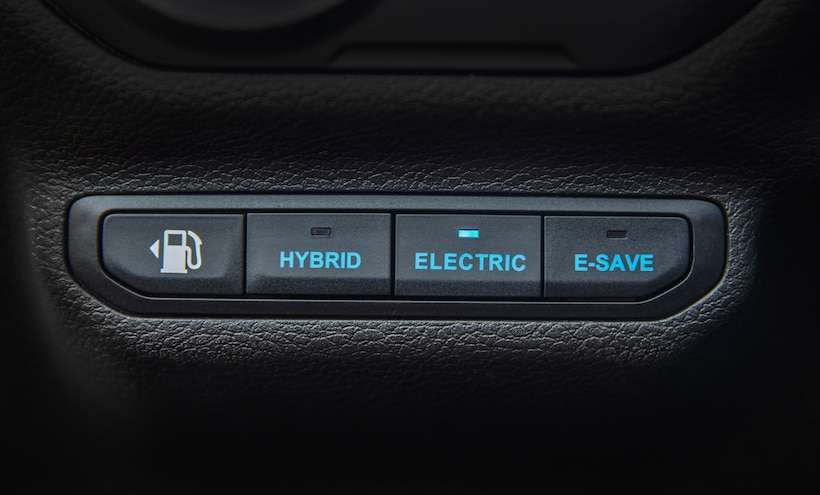 Don't fret, the Wrangler Rubicon 4xe can still off-road with the best of them. In fact, we'd say the Wrangler 4xe wheels better than its gasoline powered brethren. When we hit the trail, which was comprised of a deep water crossing and some gnarly rocky climbs and descents, we swapped the Wrangler into low-range and engaged Electric mode for a bout of engine-off rock crawling. Having all of the electric motor's torque available right off idle and routing it through the Rubicon's 4.0:1 low-range and 4.10:1 axle gears gave a level of control and finesse that previously had been difficult to achieve with the other gasoline drivetrains.

Higher speed off-roading is a blast with Wrangler 4xe in Hybrid mode, as the 470 lb-ft of torque lets it hang the tail out whenever there's a desire. Unfortunately, since our time was limited, we didn't get a chance to run the Wrangler 4xe over the rock course in Hybrid mode. We're certain, however, that the immense amount of torque on tap would help the Wrangler 4xe tackle the toughest obstacles and steepest climbs, though with a touch less grace than when running purely on electricity. 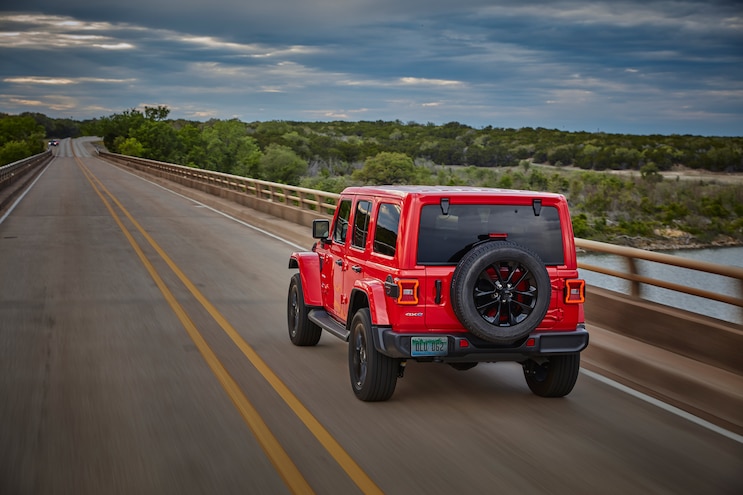 It's a bold statement, but the 2021 Jeep Wrangler Rubicon 4xe might just be the best Wrangler that Jeep has ever offered. The Wrangler 4xe has the right combination of power and fuel economy without sacrificing anything that makes the Wrangler special. In our less-than-ideal testing scenario we managed 18.8 miles of electric driving on a charge and averaged about 20 mpg combined over the course of nearly 300 miles. Ideally, for most owners the Wrangler 4xe can be driven on their daily chores and recharged at home, at work, or at the mall, limiting the time the gasoline engine is even used. Long road trips like the one we were sent on are more likely to be the exception rather than the rule.

The plug-in hybrid system is well integrated, and its operation is nearly seamless. Costing about $4,000 more than a similarly equipped 2.0L Wrangler Rubicon means that unless you run on pure electricity a majority of the time it's going to be tough to recoup the initial buy-in. However, we feel that the driving experience alone is so good that it's worth the price of admission.