The quickest and most powerful RAV4 ever! 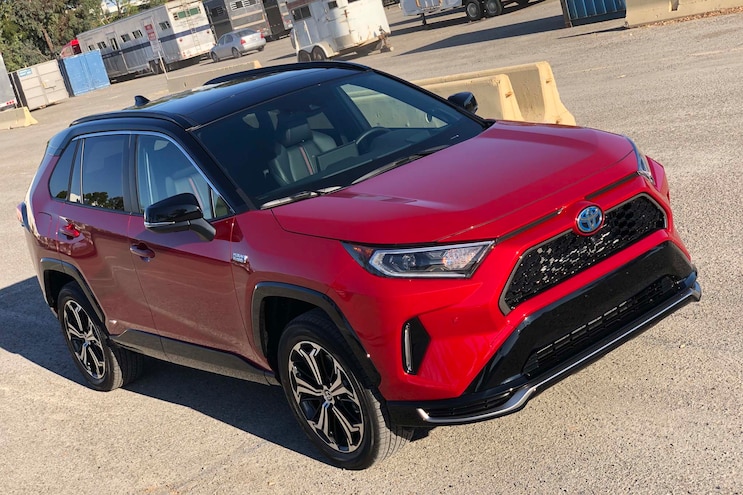 There's good reason that the RAV4 isn't just one of Toyota's most popular and best-selling vehicles, but also near the top of the sales list for all vehicles in the United States, as well. Available in seven different trim levels from LE to TRD, the RAV4 is a stylish compact crossover with exceptional driving characteristics, loads of comfort, great fuel economy, impeccable reliability, and a decent price. And now, for 2021, RAV4 is available for the first time as a plug-in hybrid.
Not too long ago we spent a week behind the wheel of a 2020 RAV4 TRD Off-Road and walked away pleasantly surprised. Now, after four days of living with the new 2021 RAV4 Prime, arguably the TRD's polar opposite, we can say that we are thoroughly impressed with the RAV4 lineup that Toyota has brought to the table for 2021. 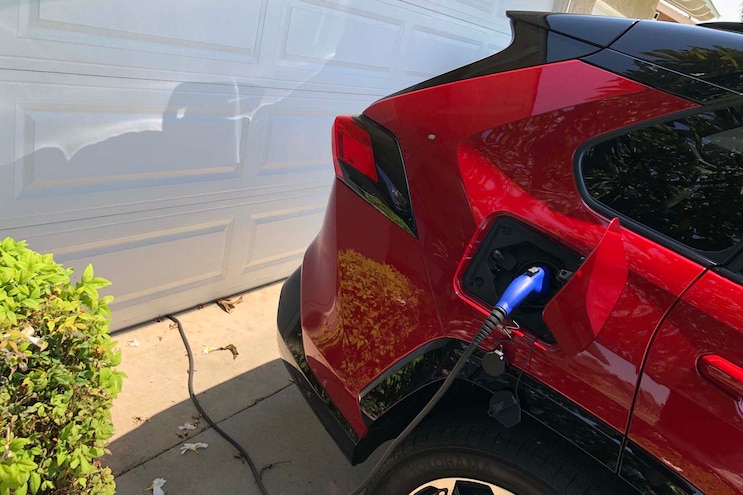 View Photo Gallery | 28 Photos
Photo 2/28   |   008 2021 Toyota Rav4 Prime First Drive
The 2021 RAV4 Prime is Toyota's first venture into a plug-in hybrid electric SUV, following in the footsteps of the company's Prius Prime. Instead of just having impressive fuel economy, the RAV4 Prime is also capable of running purely on electric power for more than 40 miles at up to 84 mph. And with a combined 302 horsepower, the RAV4 Prime is Toyota's quickest-accelerating four-door vehicle and second quickest in the current lineup, only behind the Supra.
The RAV4 Prime features the same 2.5L Atkinson-cycle four-cylinder engine and pair of electric motors (one at the front and one at the rear) as the RAV4 Hybrid. The gasoline engine in the RAV4 Prime is tuned to produce 177 hp and 165 lb-ft of torque (as opposed to 203 hp in the standard RAV4 and 176 hp in the RAV4 Hybrid). When combined with the electric motors, output jumps to 302 hp and 353 lb-ft. In EV-only mode the front electric motor is capable of 179 hp while the rear can pump out 53 hp. Backing the engine is a CVT transmission. 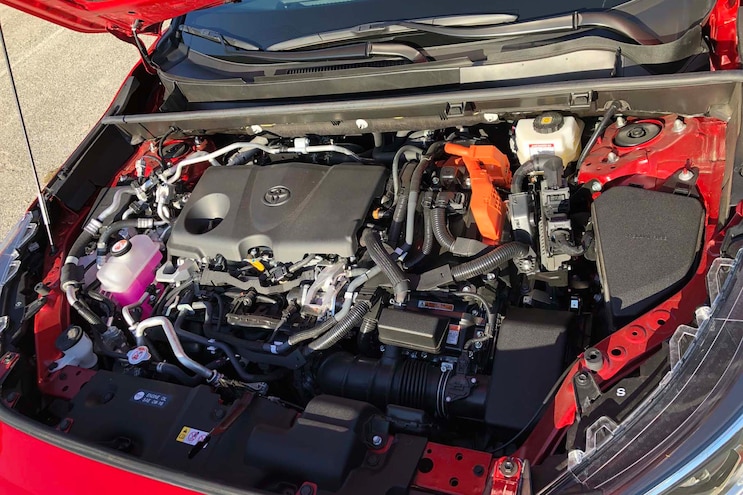 View Photo Gallery | 28 Photos
Photo 3/28   |   011 2021 Toyota Rav4 Prime First Drive
When running in EV mode the RAV4 Prime will sprint from 0 to 60 mph in a less than impressive 9.2 seconds. However, switching the vehicle into Sport and HV (Hybrid-Vehicle) driving modes, where both the gasoline engine and electric motors are active, will allow the RAV4 Prime to cut that time down to just 5.7 seconds. The RAV4 Prime feels impressively quick from the driver's seat in all modes, so we have no reason to doubt Toyota's acceleration claims.
Fuel economy is impressive, as well, with the RAV4 Prime carrying an EPA rating of 94 mpg-e and 40/36/38 (city/hwy/comb) when running on just the gasoline engine. During our four days with the RAV4 Prime we were able to log 164.7 miles while using just 1.137 gallons of gasoline. That gives us a combined 144.85 mpg. How did we do this, you ask? Let us explain
To achieve that impressive fuel economy, we cheated just a bit. But that's the beauty of a plug-in hybrid. When the car was parked in our driveway it was plugged in. When we took it out, we planned trips of no more than the RAV's 42-mile EV range. And we chose destinations with EV charging. This meant that we spent almost no time running the gasoline engine. We became very comfortable with this routine, even in just a couple days. And no, electricity isn't free, but it's considerably less expensive than gas in sunny SoCal, which at the time of testing is hovering around $3 per gallon for regular. 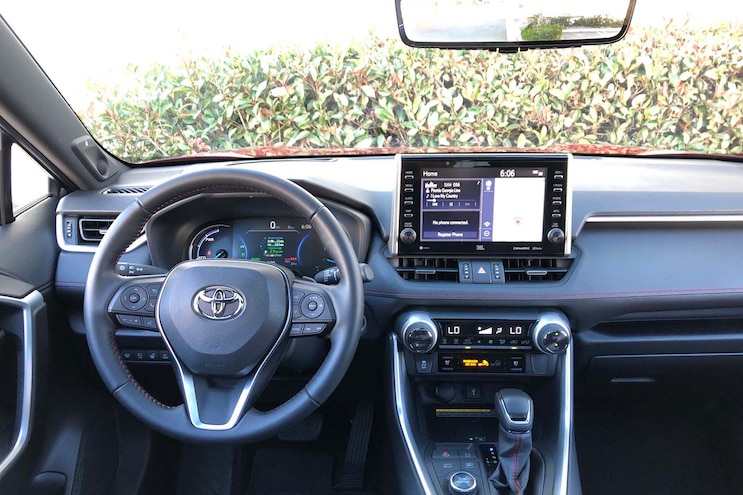 View Photo Gallery | 28 Photos
Photo 4/28   |   013 2021 Toyota Rav4 Prime First Drive
The RAV4 Prime can be operated in any of three different driving modes. First, there's full EV mode, where only the electric motors are used (while enough battery remains). Next, there's HV (Hybrid-Vehicle) mode, which uses both the electric motors and gasoline engine in tandem. The third mode is a charging mode, in which the gasoline engine is used to power the vehicle as well as charge the battery. There's also an automatic setting, which chooses the best driving mode for the current conditions.
Allowing the RAV4 Prime to travel up to 42 (EPA-estimated) miles per charge is an 18.1-kWh lithium-ion battery pack. When compared to the RAV4 Hybrid's 1.6-kWh battery it's clear to see where the extra power comes from. Despite being much larger, Toyota has mounted the RAV4 Prime's battery in such a way, under the floor, as to not intrude on passenger or cargo space. And although the battery is heavier, this added weight provides improved handling by way of a lower center of gravity. The XSE tips the scales at 4,300 pounds, which is quite portly for an SUV of its size (the heaviest RAV4 Hybrid is 3,800 pounds, and a standard RAV ranges from 3,370 pounds to 3,655 pounds). 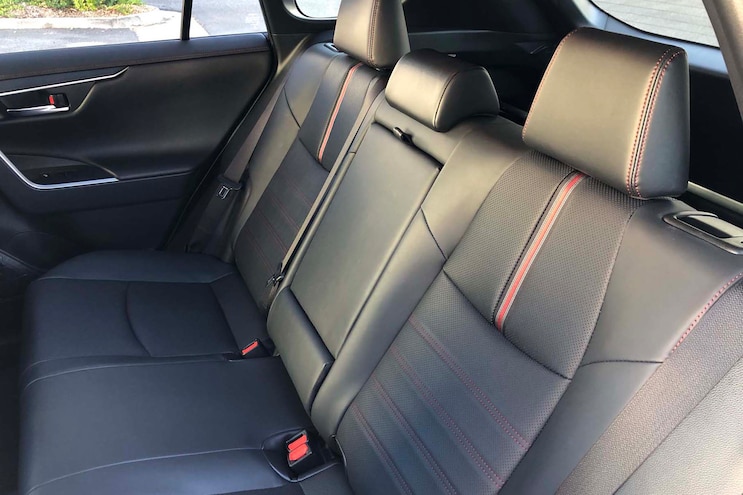 View Photo Gallery | 28 Photos
Photo 5/28   |   020 2021 Toyota Rav4 Prime First Drive
The RAV4 Prime comes in two trims: SE and XLE. Our tester was a top-of-the-line XLE fitted with the Premium package. This brought the price up to an estimated (the vehicle was pre-production, and thus not priced) $48,828 after options and destination charge. If that's too rich for your blood, the SE model starts at just $38,100. Of course, you forgo some of the nicer options to get this lower price.
Aside from 19-inch wheels, vertical foglights, and faux leather seats, the biggest thing that sets the XLE model apart from the SE is the availability of an onboard 6.6-kWh charger. To get this feature, though, you also need to add the Premium package, which costs $5,760. For the price you get a 9-inch touchscreen, 11-speaker audio system, 10-inch head-up display, 360-degree camera, panoramic sunroof, 1500-watt 120-volt A/C outlet, adaptive front lighting, parking assist, and the enhanced charging. 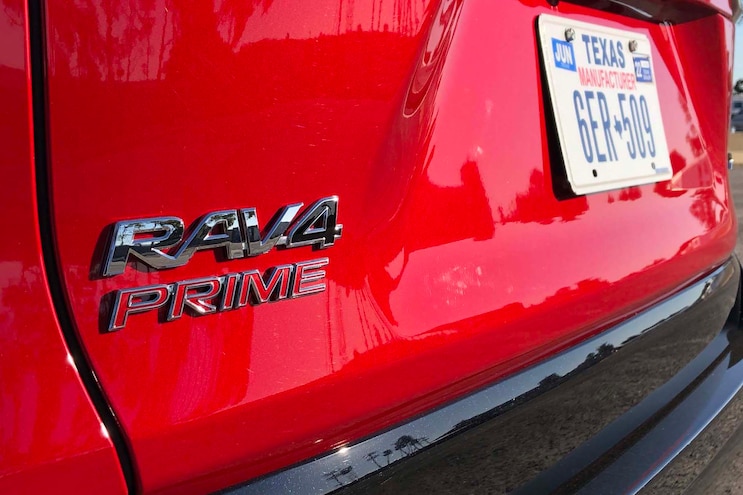 View Photo Gallery | 28 Photos
Photo 6/28   |   009 2021 Toyota Rav4 Prime First Drive
What does adding the 6.6-kWh charging capability mean, exactly? Well, both the SE and XLE come standard with a 3.3-kWh charger. This means that plugging the vehicle into a standard 120-volt home outlet will charge the battery in about 12 hours. Plugging that same vehicle into a 240-volt outlet, say a dryer plug, will cut the charge time to just 4.5 hours. Now, with the 6.6-kWh charging ability and on a 240-volt charger, the vehicle will theoretically charge fully in just 2.5 hours. Selecting this option also allows owners to take full advantage of public 6.6-kWh charging stations. Public charging times can vary wildly depending on station conditions, though.
Overall, we are totally impressed with the 2021 Toyota RAV4 Prime. We didn't get too deep into the interior, because other than a couple EV mode buttons, it's exactly the same as all the rest. The vehicle is incredibly quiet, comfortable for all passengers, and has a decent amount of cargo space. The infotainment system is among the best we've experienced in a Toyota and on par now with all the top-of-the-line systems on the market. We appreciated the head-up display, and the panoramic sunroof was enjoyable. For our daily commute, which is typically less than 30 miles, we were able to run purely on electricity. And for a further weekend drive we were happy with the hybrid system, which operated nearly seamlessly. We've shocked even ourselves to say, if this is the future, we're OK with it. 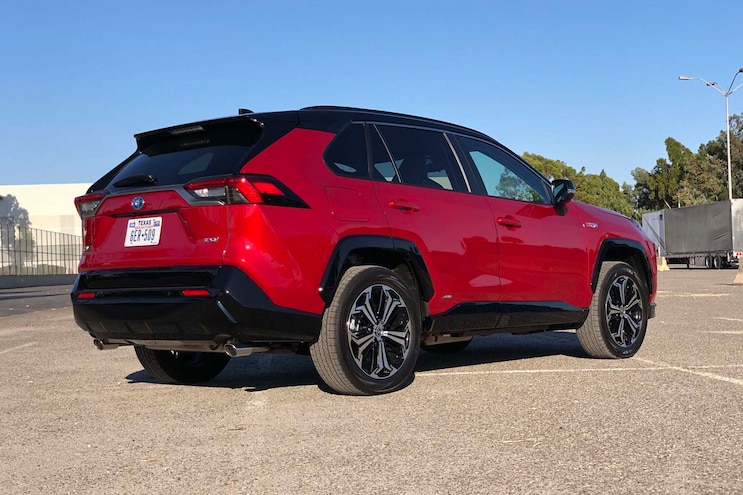