The Midsize SUV Returns With More Tech And Luxury! 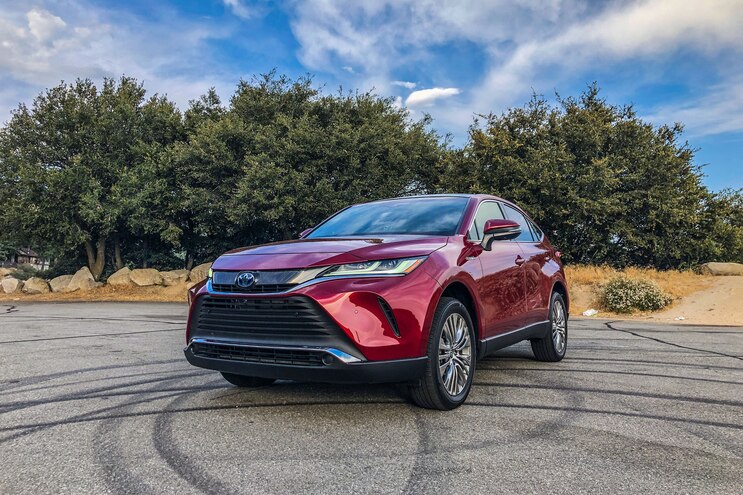 If the Toyota Venza doesn't sound familiar to you, don't fret; you're not alone. Initially introduced for the 2009 model year, the first-generation Venza was a five-passenger midsize SUV based on the same platform as the company's Camry sedan. Buyers had an option of two engines, a 2.7L I4 or a 3.5L V-6, and it was fitted with a six-speed transmission. Front-wheel drive was standard with all-wheel drive optional. Exterior styling reception was mixed, as the Venza appeared more like an overgrown hatchback than a true SUV. Adding to the confusion, Toyota listed the Venza's main competitors as the Honda Accord and Nissan Versa, marketing it as more of a Camry wagon than an SUV, though under the U.S. EPA designation it was classified as such.
At launch, Toyota estimated that they would sell 100,000 units in the United States and Canada (Venza was one of just two North American-built Toyota vehicles not sold in Mexico). At the peak in 2009, Toyota sold just 66,000 Venzas. After a mild refresh in 2012, Toyota quietly discontinued the Venza after the 2015 model year. Now, after a five-year hiatus Venza is back—with a vengeance. 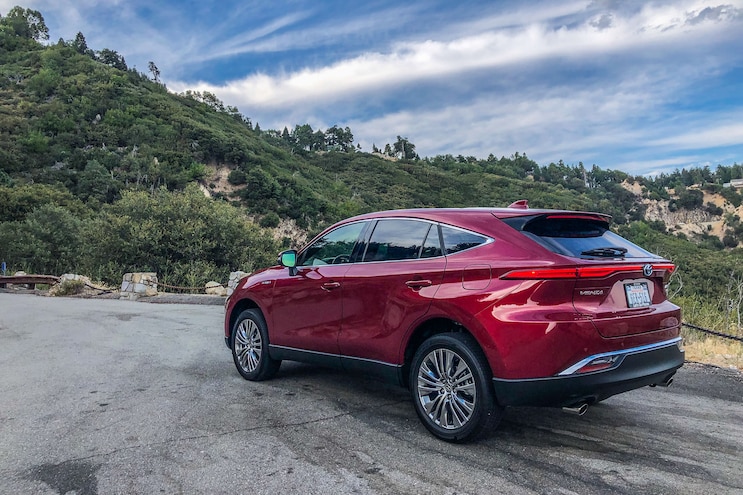 View Photo Gallery | 25 Photos
Photo 2/25   |   003 2021 Toyota Venza Driven
Other than the fact that it's still a two-row, five-passenger midsize SUV, the 2021 Toyota Venza is completely different than the first generation. This new Venza is fully SUV, eliminating any possible identity confusion. It's also built in Japan, instead of the U.S., and is based on the Japanese-market Harrier. The 2021 Venza is fitted with just one drivetrain, Toyota's Hybrid System II. And it is only available with Toyota's Electronic On-Demand All-Wheel Drive system.
We recently had the opportunity to spend four days with the new Venza and can honestly say that we were blown away by this new vehicle. With our primary focus being pickups and full-size SUVs, we haven't had a lot of exposure to vehicles with hybrid powertrains. But we've got to say, the one in the 2021 Venza is really good. The hybrid system employed by Toyota on Venza consists of a 2.5L I-4 gasoline engine paired with a CVT transmission and three electric motors. The engine produces 176 hp and 163 lb-ft of torque. When combined with the electric motors the total system output jumps to 219 hp. When in EV mode, the electric motors produce a combined 172 hp and 238 lb-ft of torque. Put in simpler terms, the Venza is peppy; however, at nearly 4,000 pounds, you're not winning very many stoplight drag races. 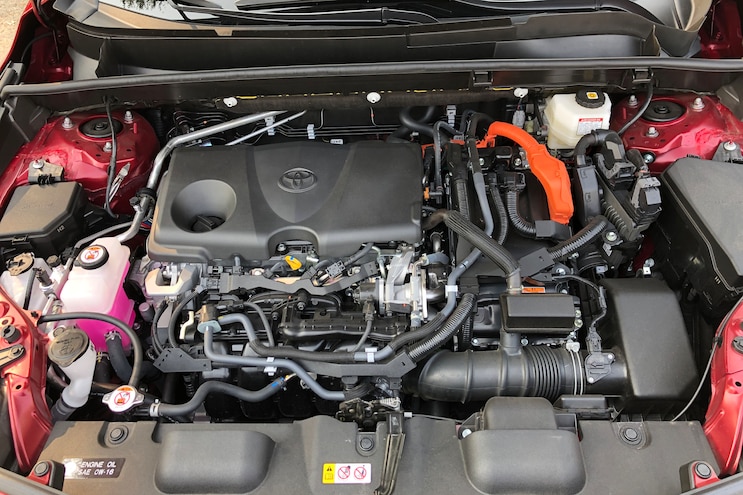 View Photo Gallery | 25 Photos
Photo 3/25   |   006 2021 Toyota Venza Driven
During our few days of testing we did almost everything we feel a Venza owner might do. We drove the carpool to school, took a day trip to the mountains, more kids playdates, drove around town, on the highway, and everywhere in between. In doing this, we never found the Venza to be lacking in power, and the operation of the hybrid drive system was completely seamless. If it hadn't been for the dashboard display, we would have never known if the gasoline engine was running or not (though it was totally fun to watch the hybrid system status display change as the vehicle worked). Even driving up the steep mountain roads, we were able to effortlessly pass slower traffic—at the designated passing lanes of course. Although we're still not fond of CVT transmissions, the one in the Venza operated so smoothly that we didn't really take issue with its presence, which is saying a lot for us.
Handing was another area where the Venza impressed. A few months back we tested a 2020 Toyota Highlander. Although it was really good, we were left fairly disappointed by its handling abilities, despite being an AWD model. Venza fully makes up for the Highlander's shortcomings. On the twisty mountain roads, it hugged corners tight, had very little body roll, and not an ounce of understeer. We're confident that this is one vehicle that can take the kids to summer camp without making anyone carsick. 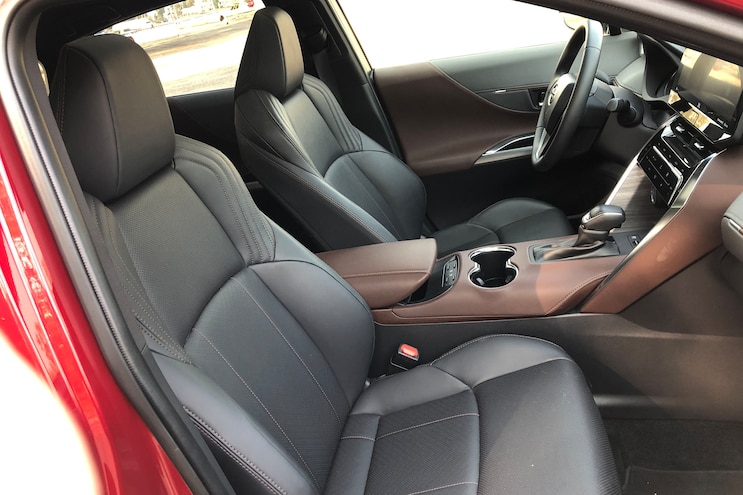 View Photo Gallery | 25 Photos
Photo 4/25   |   007 2021 Toyota Venza Driven
The model we had for testing was a top-of-the-line Limited. However, the 2021 Venza also comes in LE and XLE trims as well. Ordering is quite simple, as almost all features are standard. The base LE model starts at $33,470 and has no options available other than color. The mid-grade XLE starts at $36,000 and gives the option of upgrading to SofTex seating surfaces and a premium JBL audio system. The top spec Limited starts at $39,800 and has the option of adding an advanced technology package, which includes a head-up display, rain-sensing windshield wipers, and Toyota's new Star Gaze fixed panoramic roof.
We found the interior of the Venza Limited to be incredibly comfortable. The SofTex covered seats were soft and supportive, and the seat cooling was so on-point it should be the gold standard by which all others are judged. Thanks to Toyota's use of copious sound-deadening material and acoustic glass, the Venza was incredibly quiet. That was great because the Limited comes with Toyota's most powerful audio system, a 1,200-watt JBL system that features 12 channels, 8 speakers, and a subwoofer. The audio system is controlled by a massive 12.3-inch color touchscreen. In addition to the centerpiece 12.3-inch display, the Venza also had a 7-inch multi-information display for the driver, along with a 10-inch color head-up display as well. 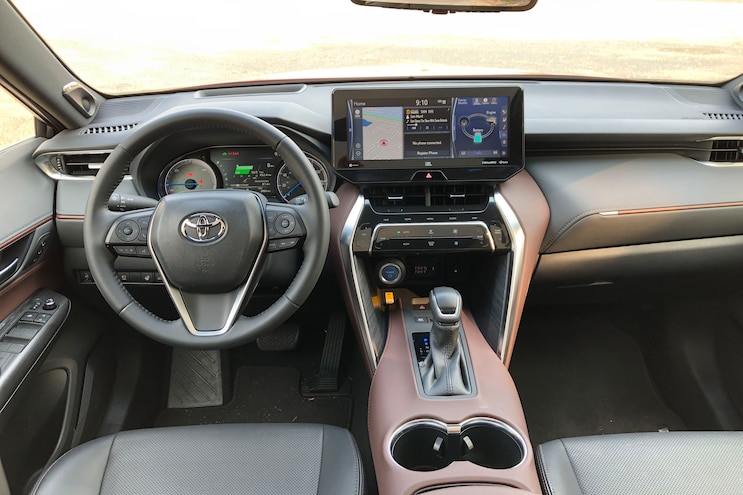 View Photo Gallery | 25 Photos
Photo 5/25   |   008 2021 Toyota Venza Driven
If we were to find one thing to complain about it would be this: We severely dislike instrument panels lacking physical buttons. Although Venza's center stack is clean and elegant, it's not entirely useful. We found the capacitive touch controls slow to respond and easy to accidentally tap. When attempting to raise or lower radio volume, or change the HVAC fan speed or temperature, it was slow and deliberate process. This meant quickly raising the AC fan speed for a quick cool down, or lowering the audio volume for a conversation, took many more seconds than should be necessary. So, for us, we prefer redundant buttons and knobs, like most other Toyota vehicles have.
The lack of buttons was our biggest source of irritation, but the biggest 'wow' moment came when we first tried out the new Star Gaze roof. By now, we're used to large panoramic sunroofs and a little surprised when a vehicle doesn't offer one. So, hearing that Toyota has taken this concept to the next level had us quite intrigued. Here's how it works: After pressing the button to retract the shade, we were greeted with an enormous pane of glass and a great view of the sky above. However, at the press of a button, the special electrochromic glass goes into a 'frosted' mode, which reduces visibility and sun glare while still providing an open and airy feeling to the cabin. You can see it in the pictures below, but seeing it work in real life is amazing; our friends still think that it's witchcraft.
Although our time with the 2021 Toyota Venza was short, it was nothing short of enjoyable. There's a lot to love about Toyota's newest midsize SUV, from its hybrid drive system and comfortable and spacious interior, to its full suite of standard advanced safety features and gorgeous exterior design. And one thing is for certain: Nobody is going to be confusing this Venza for a Camry anytime soon. 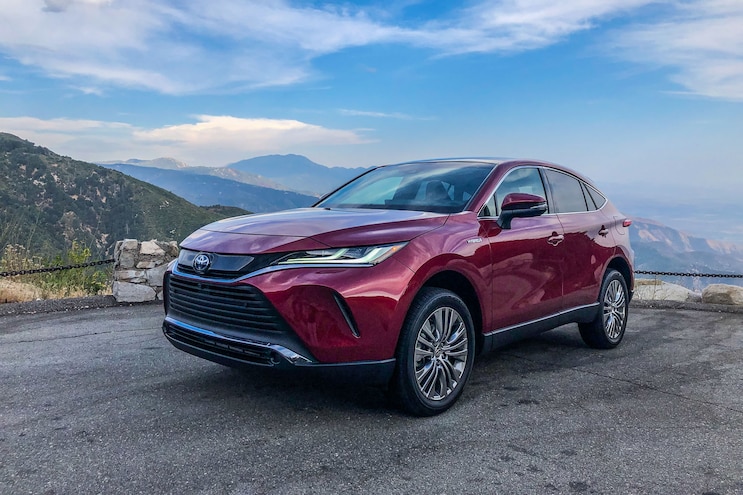