This is the Rubicon that Jeep should be building. 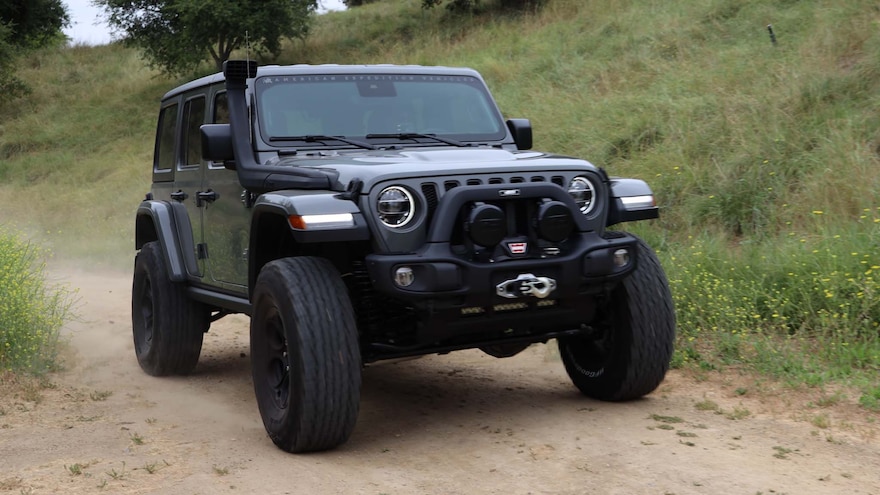 Competition in the off-road SUV space is heating up, and while Jeep's Wrangler Rubicon JL is an amazingly impressive vehicle out of the box, Ford's Bronco is coming to market with optional 35-inch tires from the factory. What if Jeep leapfrogged the competition and came to the market with a Rubicon on 37-inch tires? Would that be a realistic upgrade, and what would the trade-offs be? Well, no what-ifs required. You can purchase that exact vehicle right now, and we just so happened to get our hands on one for an evaluation.
Offering fully engineered and fully warrantied OE-quality whole-vehicle solutions is American Expedition Vehicles, or AEV. Based out of Michigan and Montana, AEV is a company that prides itself on conversions that complement and expand upon the base vehicle.
Over the years, AEV has been responsible for the Jeep TJ-based Brute, Jeep JK-based Brute Double Cab, upgrades for the Jeep TJ, Jeep JK, and Ram 1500 (DS platform), in addition to the previous-generation Prospector and Prospector XL lineup. Today's AEV conversions include the Chevy Colorado-based Bison, Jeep Wrangler JL- and Gladiator-based JL/JT350 and JL/JT370, and the Ram-based Prospector and Prospector XL fullsize trucks. 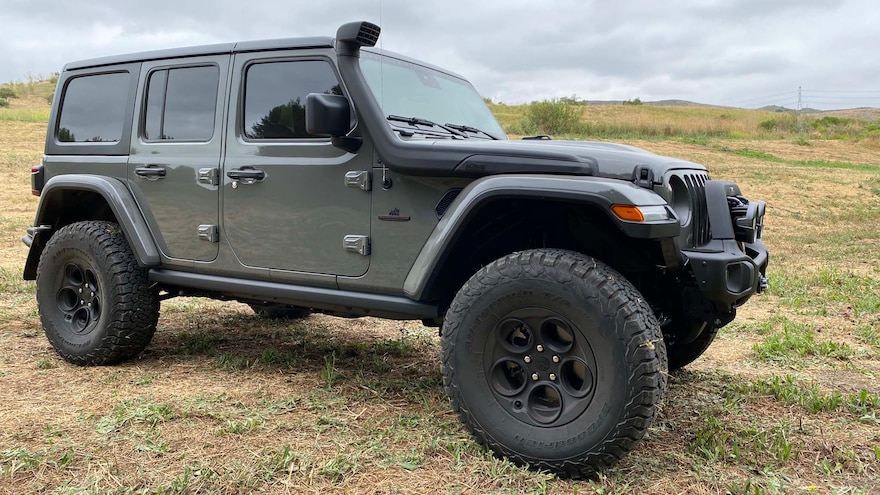 View Photo Gallery | 24 Photos
Photo 2/24   |   002 Aev Jl370 First Drive
Each conversion is designed to work seamlessly with the platform on which it is based and is engineered with handling, crash, and overall vehicle systems compatibility in mind. You won't find any shortcuts in an AEV build, and every component is of high quality. AEV also prides itself on made-in-the-USA products for the vast majority of the company's offerings. Brand partners include only top-tier names such as Bilstein, Baja Design, Warn, and BFGoodrich.
While individual components from AEV's extensive parts catalog can be purchased piecemeal for any of these vehicles, AEV factory builds are converted at the company's impressive 110,000-sqare-foot Michigan facility and sold through authorized dealers around the country. Read on for our first driving impression of AEV's Wrangler-based production JL370. 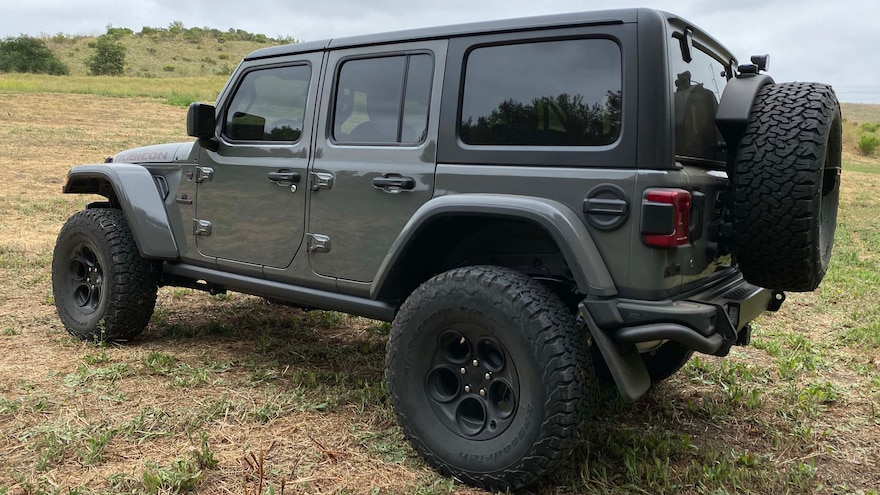 There is no doubt that AEV has a unique and upscale design aesthetic that feels very OE. Part of it comes from their desire to design parts that are as integrated to the base vehicle as possible, and part of it comes from positioning themselves as a boutique manufacturer. AEV is also unique in the fact that they have access to manufacturing technologies and manufacturing techniques that are more in line with an OE manufacturer than an aftermarket one.
For example, AEV uses stamped bumpers like an OE would, instead of hand-fabbed ones. These stamped bumpers look like they were designed in tandem with the JL and match up perfectly with the flares and bodylines. Even the AEV snorkel integrates well and doesn't look like an afterthought. 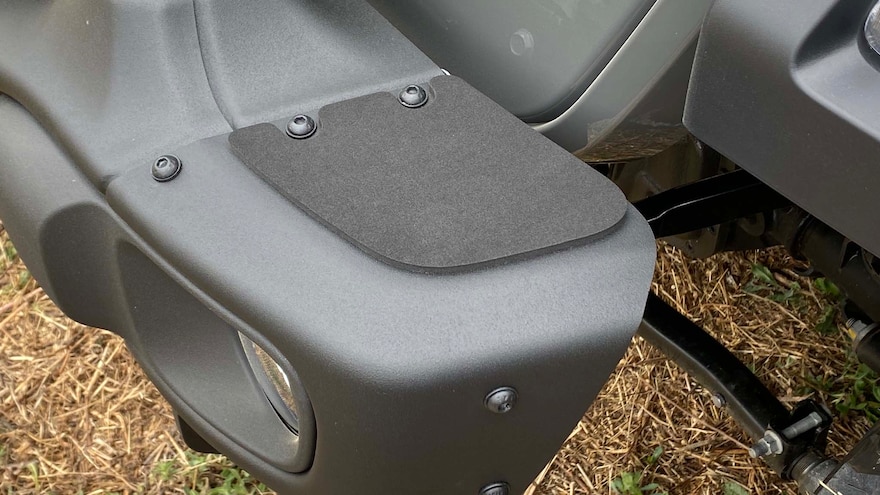 View Photo Gallery | 24 Photos
Photo 4/24   |   004 Aev Jl370 First Drive
Our tester came equipped with AEV's stubby front bumper (a full-width version will be offered at a later date), which, despite its size, actually packs a lot of features in a tight space. Not only does it house a Warn Zeon-10S winch low and out of the airstream, but it packs a light bar behind the lower skidplate, rehomes the factory driving lights, has a hidden wiring channel behind the hoop to keep any wiring out of sight, and even includes some unique neoprene pads on the top of the bumper to cushion your knees when you're working under the hood.
The rear bumper is unique to the JL in that it now holds the license plate and the parking sensors, but the one-motion swinging tire carrier will be recognizable to those who are familiar with the JK version. It has the same design with the three-hole mast to mount lights or antennas and houses the optional 10.2-gallon fuel caddy as close to the body as possible, as not to disrupt the handing by having fuel storage further away from the rear axle than necessary. The factory rear camera is retained in the spare wheel hub and works as well as it does on the stock JL, although from a more useful higher vantage point. Corners of the bumper are useful as steps, though the JL no longer has the water tanks that the JK version had.
AEV has several wheel designs available, and our tester was outfitted with the 17x8.5-inch Savegre II cast wheels, which are an update of one of our favorite AEV classics. The Savegre II looks great and is a JL-specific fitment with an offset that takes into account the wider axles, as well as a larger center bore to fit over the rear camera.
Every AEV factory build also comes with a riveted data plate, full AEV badging and graphics, and a windshield banner. 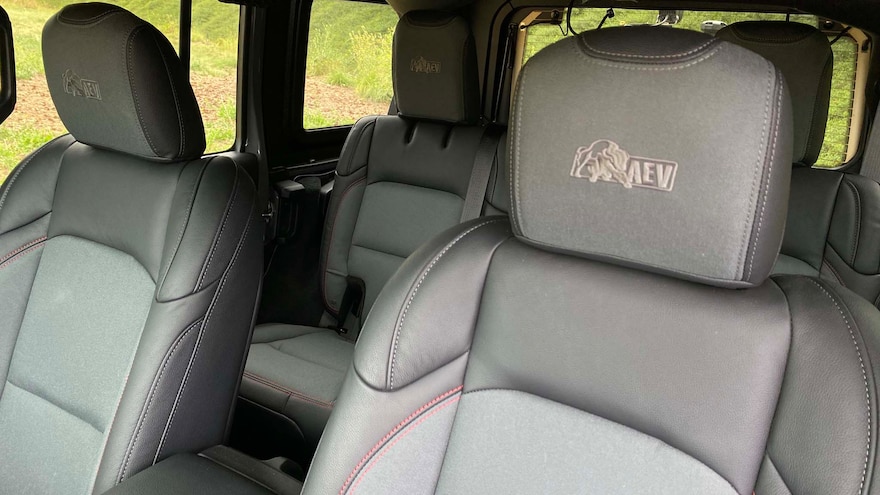 Inside, the JL370 receives several AEV touches to remind you that you aren't piloting an everyday Rubicon. Starting with the unique logo gauge cluster, the company uses a sporty font reminiscent of what can be found on SRT vehicles. Our tester was also equipped with AEV's new Cordura and leather seating covers, which are meant to be durable while giving a hint of luxury commensurate with the JL370's price tag. The Cordura does a better job of breathing on those hot days, is stain and water resistant, and holds you in place better than the full leather seating packages that are also available. Prominent AEV logos on the headrest also let people know that this Jeep is just a little more special.
Speaking of special, we were amazed at the transformation of the interior with just a simple color change of the hardtop. What is usually a bright and white interior feels a little more exclusive when the top is painted black. Sometimes it's the more subtle change that makes the biggest difference, as evidenced from all the comments we got about it.

The JL370 is equipped with AEV's Dual Sport RT suspension system, which we had a chance to sample in prototype form. Everything we wrote about the system in that story holds true today, but the tuning of the production Bilstein shocks is even more dialed in than when we drove it last. Fitted with 37-inch BFGoodrich all-terrain KO2 tires, the ride is better than factory, and handling hasn't been compromised one bit.
One area we loved driving the JL370 was in twisty terrain, where the Jeep doesn't plow at all. It's almost fun to drive on twisty roads and handles very flatly and neutrally. Not something we thought we'd be complimenting on a solid-axled rig with off-road tires.
It's also great on the freeway or out on the open road where the JL370 provides comfort and isolation without the extremes of sloppiness and body roll on one hand or harshness and twitchiness on the other. It's a very balanced, very comfortable suspension that you can tell was obsessed over to get it right. That extreme attention to detail gives the JL370 the honor of being one of the best-handling aftermarket suspensions we've tested.
Other notes about the JL370 on the highway included the overall quietness of the snorkel, not adding any additional wind noise. We were surprised the first time we got on the throttle and heard the induction roar, though, which actually sounds pretty cool. We also climbed the grade to the Eisenhower Tunnels on I-70 in Colorado during our test in triple-digit temps while maintaining the speed limit and never saw any cooling issues with the 3.6L, giving us confidence that the AEV bumper still allows plenty of airflow to the radiator.
Our test vehicle was also equipped with adaptive cruise control, blind spot detection, and parking sensors, all of which worked as intended in with the JL370 upgrades. Over 2,500 miles of testing, we calculated our average fuel economy at 16.0 mpg, with a best tank of 17.1 mpg, in our manual-equipped JL370 with 4.88 gears. Pretty remarkable real-world numbers, especially when you consider it's not much of a drop from the optimistic combined EPA number of 19 mpg in stock form. 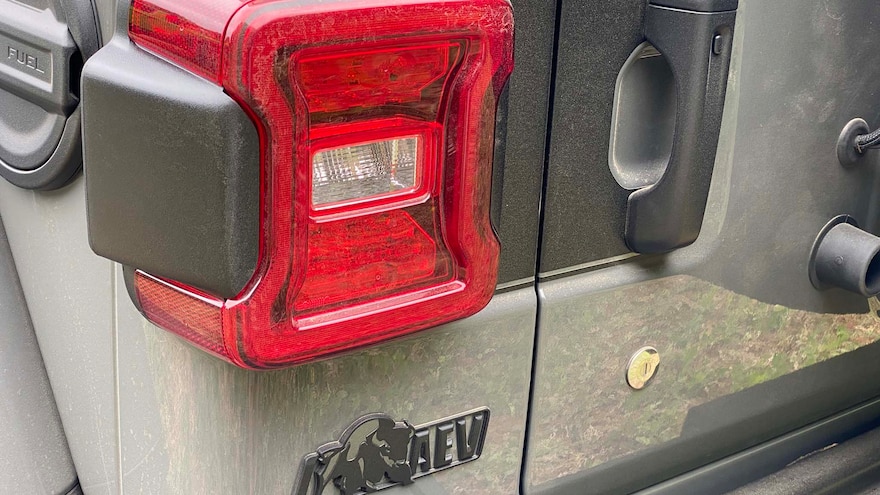 On the trail, the JL370's suspension continues to impress. Whether you are crawling through a technical section or hauling down some desert wash, the JL370 is always composed and capable. There is enough flex, with the approximately 10 inches of travel, to go wherever you'd want to go exploring, and the Jeep handled a side trip to Moab with ease.
We'll admit to being spoiled on big-piston reservoir shocks for the wheeling we enjoy, but because the optional 8100XP shocks weren't available yet, our tester was equipped with the non-reservoir RT5100s. We went into our test wondering if the RT5100s would be enough shock for us, and what we were forced to admit after hundreds of off-road miles is that these are fantastic shocks for 90 percent of anything we wanted to do. They work great with the progressive-rate coils, are low maintenance, and the ride quality over every terrain never left us unenthusiastic. We even hit some high-speed washes, and while we were careful to avoid the big whoops, the RT5100s never faded or under-performed. The fact of the matter is that while we would upgrade to the bigger 60mm 8100XP reservoir shocks for the higher-speed trail riding we enjoy, the 46mm RT5100s offer shockingly good (pun intended) suspension control and ride quality—even when the JL370 was loaded down with people or gear.
One last thing to note about the JL370's off-roadability is the 101:1 crawl ratio that is netted with the manual transmission/4:1 Rubicon T-case/4.88 gears/37-inch tire combination. To think that a vehicle you can buy right off the showroom floor with a full factory warranty and a 101:1 crawl ratio is mind-blowing, especially when you realize that those were aftermarket transfer case numbers less than a decade ago.

We are huge fans of the American Expedition Vehicles JL370 because it just plain works. With no squeaks or rattles, full integration into the JL platform, great drivability, and quality components, it's difficult to imagine even Jeep could do it better. Despite all of the upgrades, there are no compromises or drawbacks to using one in everyday life, and we especially appreciated the lack of lights on the dash and that all of the safety systems continued to work as intended.
The AEV JL370 is a well-rounded and fully integrated rig that is a great choice for anyone looking to get more capability for exploring the backcountry without sacrificing the OE aesthetic or warranty. To us, it's the way the Wrangler Rubicon should come from the factory, but fortunately for AEV, it doesn't.
Source
American Expedition Vehicles
(248) 926-0256
www.aev-conversions.com