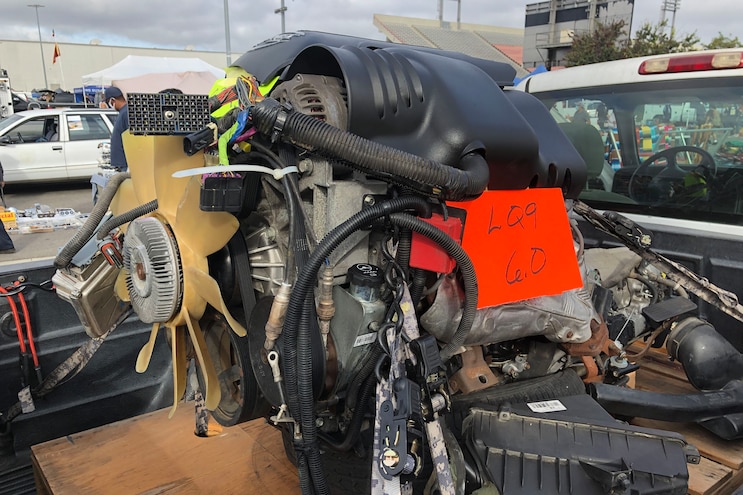 Once every month, very early on the second Sunday, car- and "truck guys" gather at Veterans Memorial Stadium in Long Beach, California, to partake in a few hours of treasure hunting at Topping Events' high-performance swap meet.
Now in its 37th year, the Long Beach High Performance Swap Meet is a live, in-person marketplace of parts, tools, memorabilia, and a mixed bag of other automotive-themed goods that are being sold and negotiated for by very motivated buyers and sellers. It's a venerable rummage sale for almost anything associated with trucks (and cars), especially odd, rare, and/or obsolete pieces that are used for customizing classics. Don't misunderstand things, though. Brand-new stuff can also be had at the meet, in most cases for a song.
Related Articles
A 1,000-hp Mustang, Cool Performance Parts, Tools, and Efficiency Highlight This Social Distance Shop Shelter
Hard-Core Race Parts, Tools and Man-Cave Amenities Highlight This Social Distance Shop Shelter
As we noted in our first report, the high-performance swap meet is also a great place to see cool trucks, let alone possibly buy them. Attendees typically drive there in pickups (gotta have something to haul swap-meet treasures home with), and trucks are also sellers' vehicles of choice for carting or towing their wares to and from Veterans Stadium. In some instances, pickups are also displayed as onsite rolling business cards, highlighting a shop's craftsmanship and handiwork.
Diesel Power editor KJ Jones spent one early Sunday morning walking the grounds at Vets' Stadium and assembled the following photos and video of the truck parts (OK, and one really cool 1970 Chevy Corvette Stingray), cool tools, and other mechanical randomness that deals were being made for.