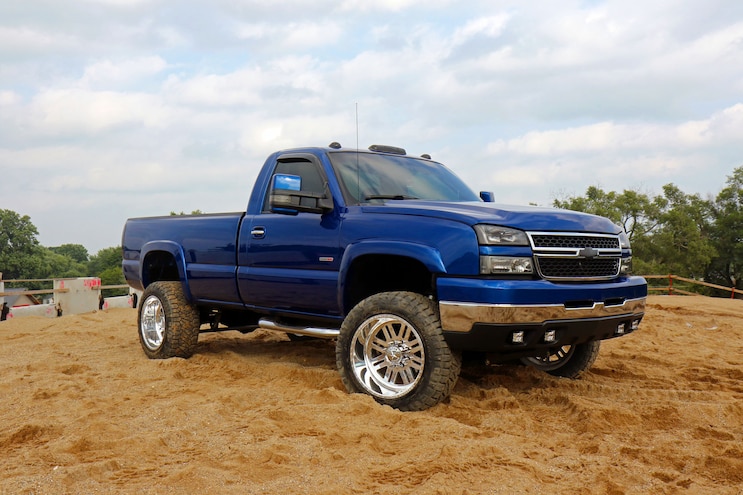 When Steve Berglund purchased his Arrival Blue 2003 Chevrolet Silverado 2500HD, he was still dealing with the bitter disappointment of his beloved custom 2003 GMC Sierra 2500HD being wrecked. He initially intended to simply drive and enjoy the new Silverado without making any changes other than some simple ECM tuning, but then the ideas started flowing and he saw the new truck as a chance for a fresh start.
The Silverado was one of the cleanest trucks Steve found in his search, making it a perfect starting point for a modest daily driver build. He began work on it by removing the leveling kit and installing a Cognito Motorsports 4- to 6-inch inch non-torsion bar lift kit complete with Fox Factory Performance Series 2.0 shocks on all four corners. The truck rolls on a set of 33X12.50R20 Nitto Ridge Grappler tires wrapped around polished aluminum 20x12 American Force Rebel wheels.

View Photo Gallery | 40 Photos
Photo 2/40   |   Steve Berglund's 2003 Chevrolet Silverado 2500HD looks great and sports a unique NV5600 six-speed manual transmission.
He also began to do some color matching on the truck's exterior to bring out the color even more. Then lightning struck a second time when Steve's then girlfriend called him to tell him that she rear ended a car with his truck. He felt like he was Bill Murray reliving the same day over and over in an automotive "Groundhog Day" of his own.
This time, however, the damage was not as extensive so he went back to work and decided to upgrade the truck further by installing a 2005 grille, hood, lights and fenders to replace the damaged parts and improve the appearance at the same time. Having decided to go beyond the simple tuning and drive it phase, Steve turned to Jason Wehrli and his team at Wehrli Custom Fabrication to not only dress up the engine bay but also provide some more oomph under the hood as well. Steve and Jason settled on a WCFab BorgWarner S366SX-E turbocharger upgrade, featuring boost tubes and a turbo pedestal that are powder coated blue and metallic gray to match and contrast the bright exterior of the truck. Exhaust is expelled through a set of ProFab manifolds and up-pipes that channel the hot gasses to the turbine. The custom exhaust setup terminates in the bed with a polished 6-inch stainless steel, miter-cut Silverline Exhaust stack. They also installed a WCFab coolant tank and pipe kit that is powder coated in matching blue. 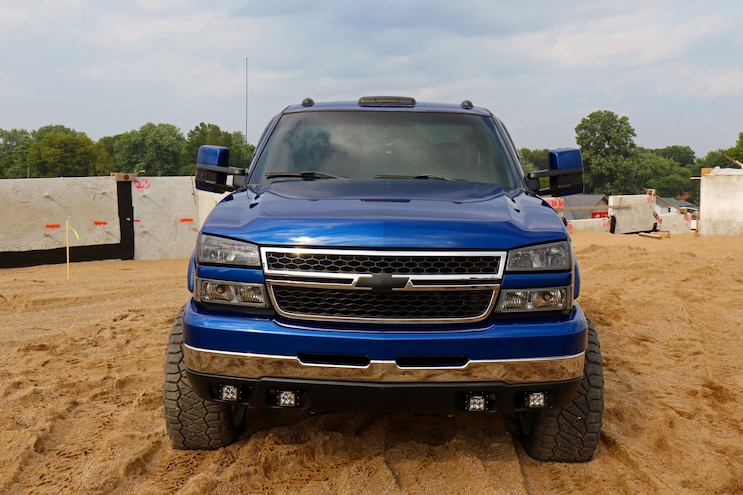 View Photo Gallery | 40 Photos
Photo 3/40   |   The 2003 received a 2005 facelift after it was involved in a wreck. The new fascia hides a 600hp 6.6L Duramax LB7 engine under the hood and behind the grille.
To augment the fuel system, Steve installed a FASS Fuel Systems Titanium Series 150-gph lift pump with CAT filters to make sure the engine's stock high-pressure CP3 injection pump and injectors receive plenty of clean diesel fuel on demand. Like most gearheads, Steve says his truck will never be completely "done" and is saving money for major fuel-system upgrades in the near future (a bigger CP3 or possibly dual CP3s and high-flowing injectors). For the current setup, Steve relies on the turbo and custom EFILive tuning by Bob Olson of Team Twisted, to coax more power from the otherwise stock 2003 6.6L Duramax LB7 engine. He estimates that the truck makes around 600 hp and 1,000 lb-ft of torque.
The engine is backed by a very unique transmission combination that Steve stumbled across while building the previous truck, but didn't get a chance to install because of the wreck. He is using an NV5600 six-speed manual transmission that was built for GM to use as a tester when the company was exploring options for replacing the well-known ZF6 manual. GM ultimately chose to eliminate the manual altogether and Steve's NV5600 eventually made it onto an auction site where he purchased it along with the necessary hardware to install it. 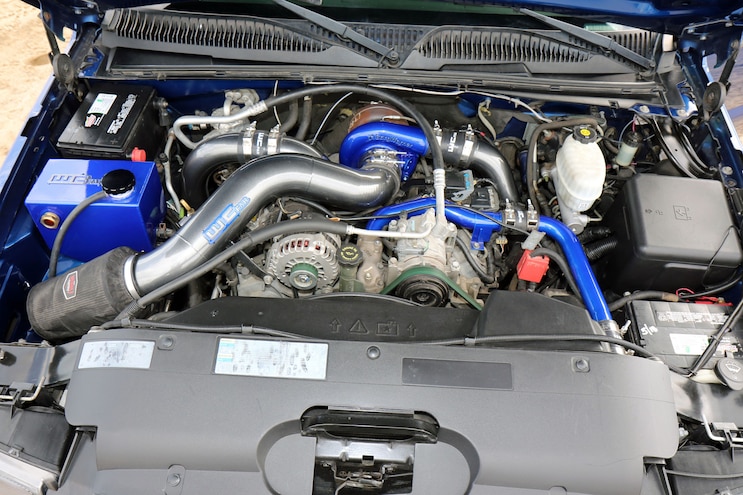 View Photo Gallery | 40 Photos
Photo 4/40   |   The Duramax in all its glory features custom WCFab piping, powder coating and a BorgWarner S366SX-E turbocharger perched atop the engine.
His 2003 Chevy was originally fitted with an Allison 1000 six-speed automatic transmission, but since he had all the parts and pieces needed to install the NV5600 he performed the transmission swap and thoroughly enjoys rowing his own gears. The NV5600 is linked to the Duramax engine through a South Bend Clutch dual-disc clutch assembly to handle the power while delivering a smooth engagement.
In addition to the Cognito Motorsports lift kit and the 33-inch wheel-and-tire combination, Steve installed a set of Pacific Performance Engineering tie-rod sleeves to keep the truck pointed straight under power. To tow heavy loads he installed a B&W gooseneck hitch below the bed, with a turnover ball so he can load the bed whenever he's not hauling the trailer. Since it is a daily driver that is used for towing, hauling and work duties on a regular basis Air Lift air bags are installed in the rear for proper load leveling. Steve also fabricated a set of adjustable traction bars and had them powder coated metallic gray to keep the Silverado from twisting the leaf springs when he mashes the loud pedal. 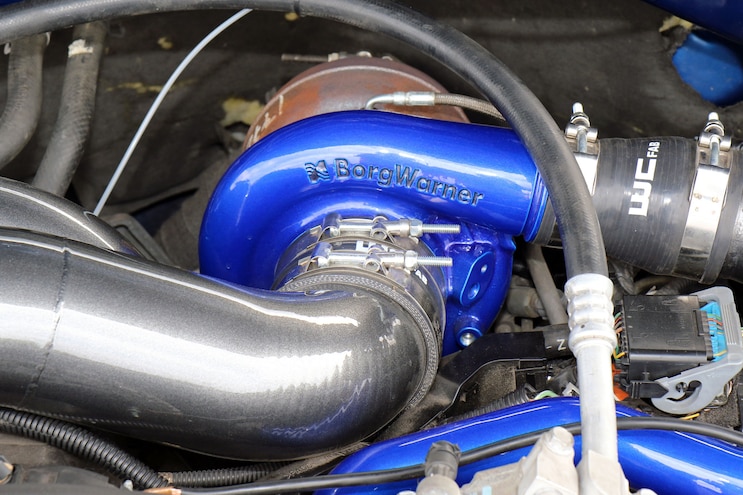 View Photo Gallery | 40 Photos
Photo 5/40   |   Using a Wehrli Custom Fabrication single-turbo kit, Steven replaced the stock turbo and piping with a powder-coated BorgWarner S366SX-E unit.
To cap off the build, Steve removed the rear bumper in favor of a smooth roll pan that is painted to match the body's color, along with other exterior trim such as the front-bumper trim, fender flares, tow mirrors, door handles, tailgate handle and grille trim. Then he installed a quartet of Rigid LED driving lights in each of the lower bumper openings to light up the night as he blasts down the road. To spice the rest of the lighting he added a set of Recon smoked LED cab lights and taillights as well as aftermarket lightly smoked headlights and parking lights with accent LEDs. The bed is treated with a Line-X finish to protect it from work incidents and daily use.
Moving inside the cab, Steve retained the stock cloth interior with the rubber flooring but added custom diamond-plate-aluminum floor mats that he fabricated. Of course he removed the column-mount automatic-transmission shifter and installed a floor-mounted stick for NV5600 gear selection. To keep an eye on the engine he relies on an Edge Products CTS display and an analog AutoMeter Competition Instruments Cobalt 60-psi boost gauge mounted on the top of the column. Finally, Steve installed a Pioneer touch screen audio/video receiver in the factory dash location with Pioneer speakers in the stock locations all around to make cruising a little more enjoyable.
Steve's Silverado may not be riding on 40-inch tires with custom suspension or have a 1,500hp race engine, but it is still a great-looking ride that is certainly unique with its NV5600 manual transmission. Thanks to his hard work and help from his friend Kris Mims, his daily driven rig is a fun to drive truck that continues to get better as he wrenches on it more and more. 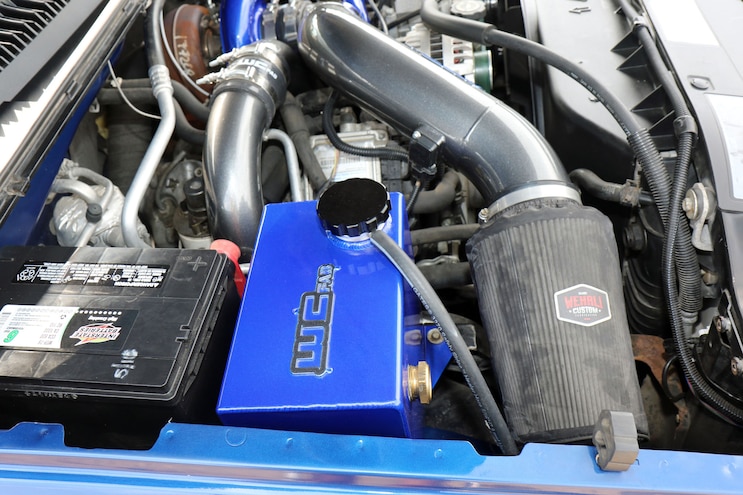 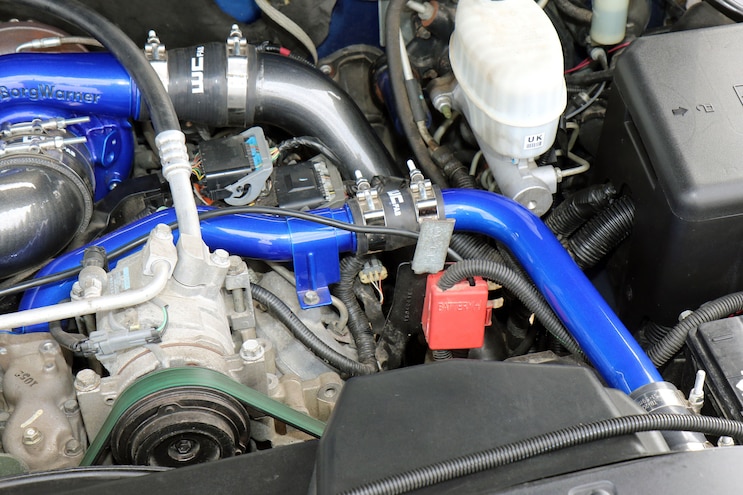 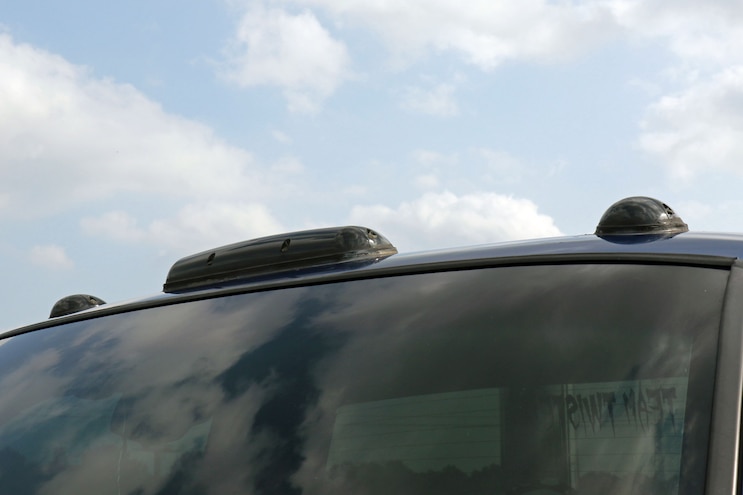 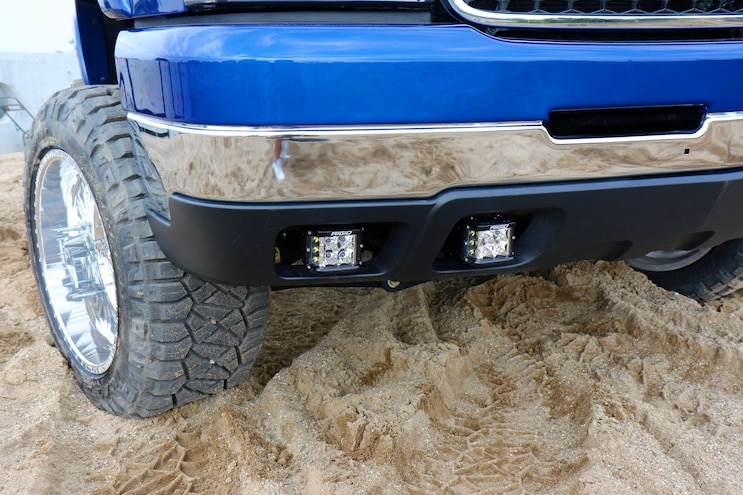 View Photo Gallery | 40 Photos
Photo 9/40   |   Rigid LED cube lights are installed on each side of the front bumper to cut through the darkness. 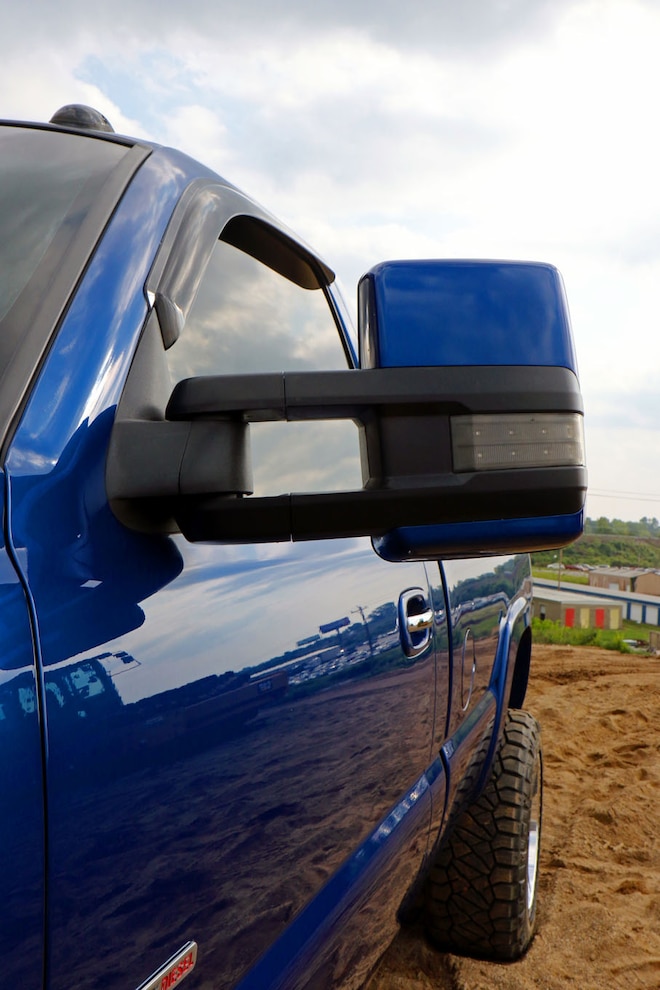 View Photo Gallery | 40 Photos
Photo 10/40   |   The tow mirrors received the same color-matched paint treatment as just about every other exterior trim piece that could be removed, giving the rig a very clean and sporty look. 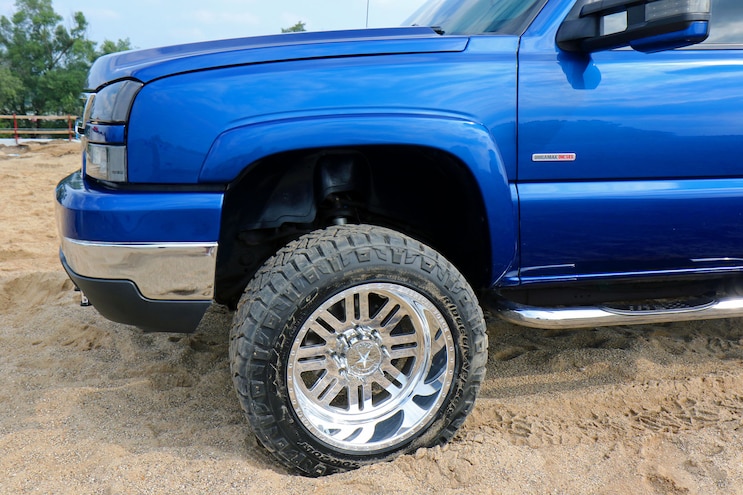 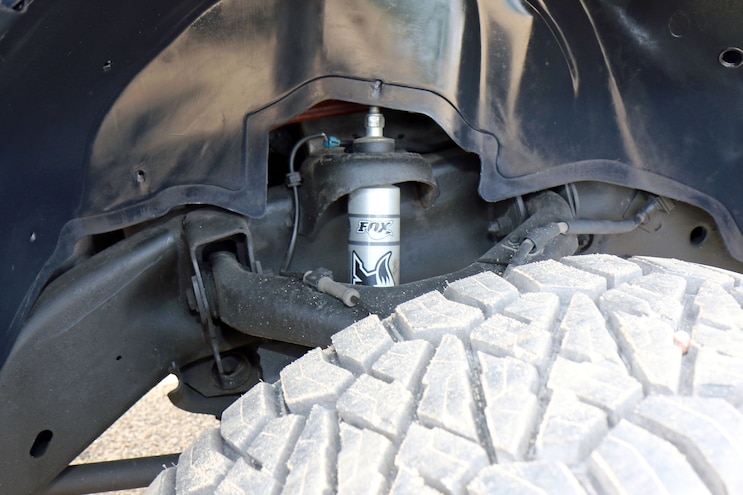 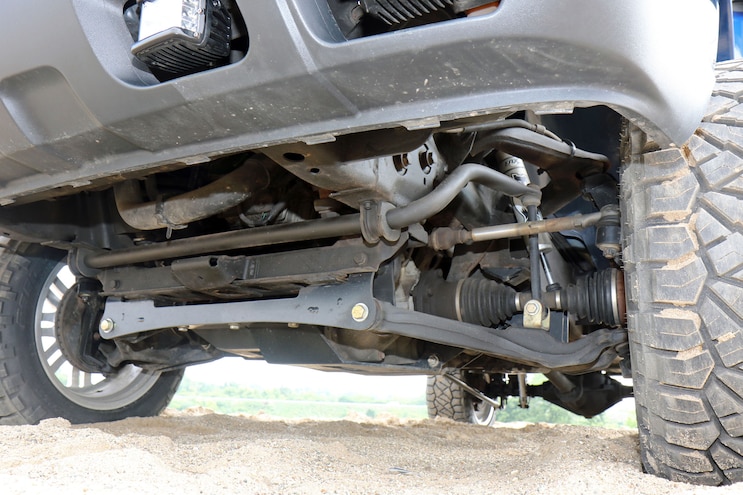 View Photo Gallery | 40 Photos
Photo 13/40   |   Looking under the front you can see the PPE tie-rod sleeves as well as the Fox shocks and Cognito Motorsports suspension components that provide lift without lowering the torsion-bar brackets and reducing ground clearance. 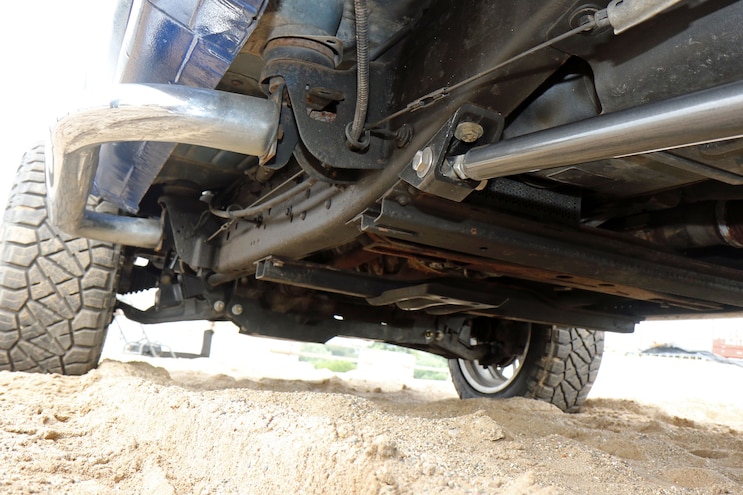 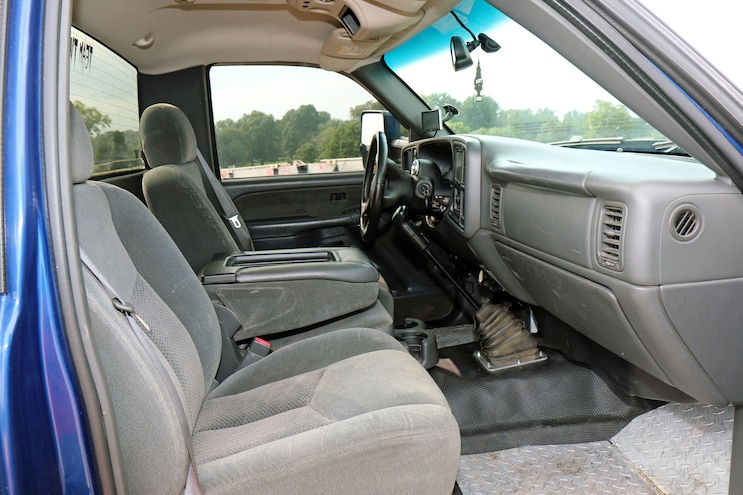 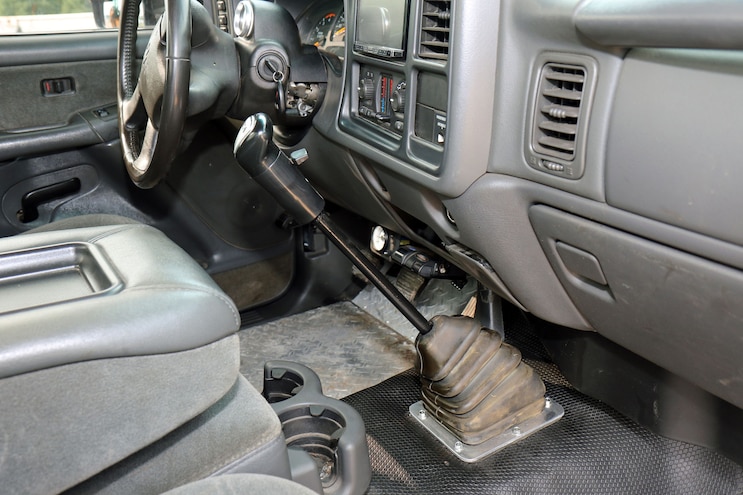 View Photo Gallery | 40 Photos
Photo 16/40   |   But then the manual-transmission shifter in the transmission tunnel jumps out at you, making it clear that this regular cab is far from regular. 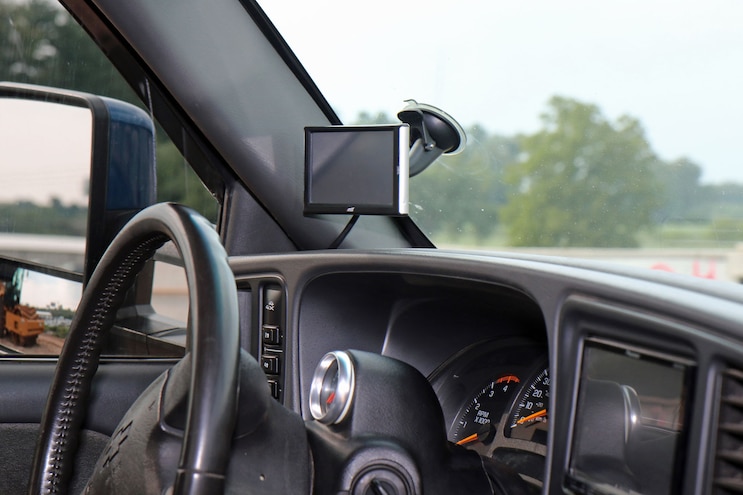 View Photo Gallery | 40 Photos
Photo 18/40   |   To keep the floor clean and give the truck more unique style, Steve fabricated a set of diamond-plate-aluminum floor mats that will hold up to work boots, dirt, grime and mud, and look good after a quick wipe down. 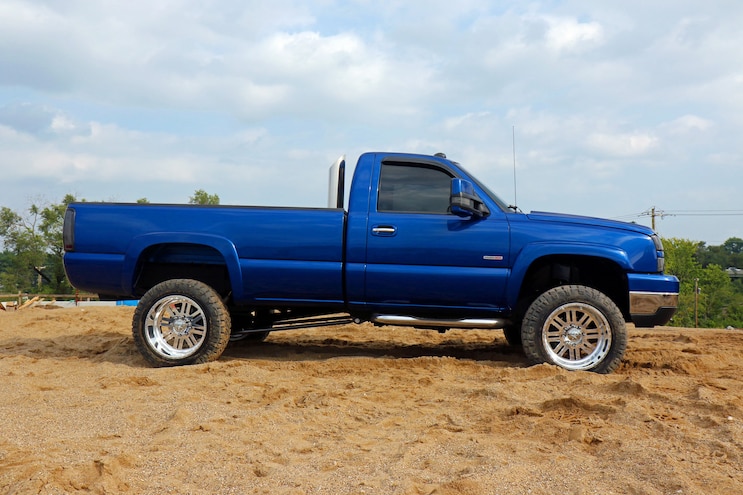 View Photo Gallery | 40 Photos
Photo 19/40   |   Steve gave his truck a great stance and profile with a good-looking wheel-and-tire combination. Combined with a mild lift and color-matched trim and tinted windows, the Silverado had universal appeal. 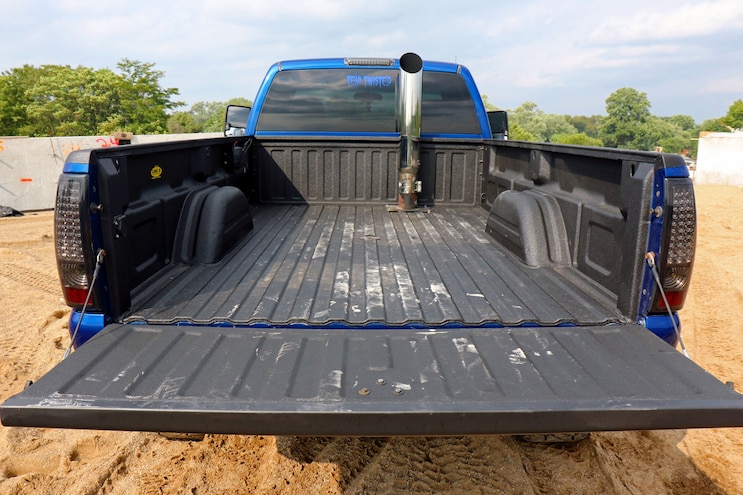 View Photo Gallery | 40 Photos
Photo 20/40   |   Since he uses it regularly as a work truck, Steve had a Line-X bed liner sprayed into the bed to protect the finish and help keep items from sliding around inside. 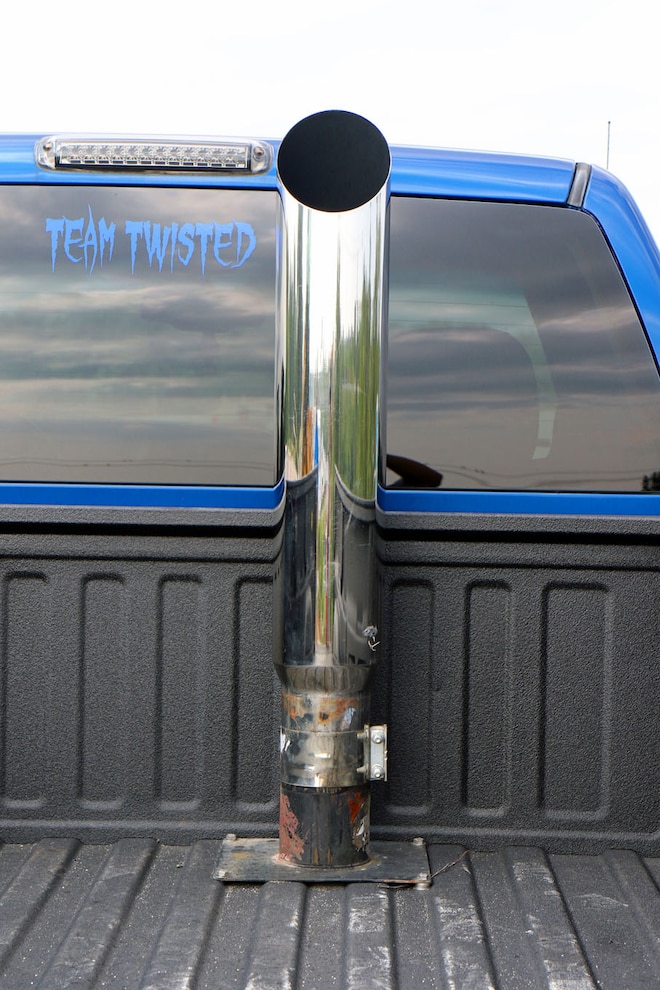 View Photo Gallery | 40 Photos
Photo 21/40   |   The front part of the bed is dominated by the 6-inch polished stainless steel exhaust stack. Looking beyond the stack you can see the smoked Recon third brake light. 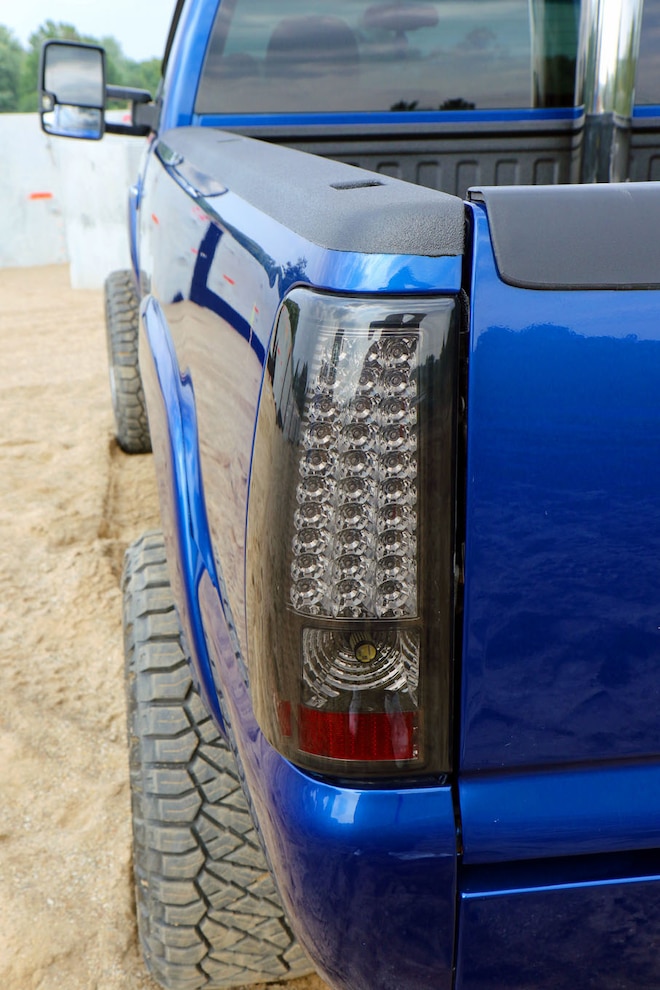 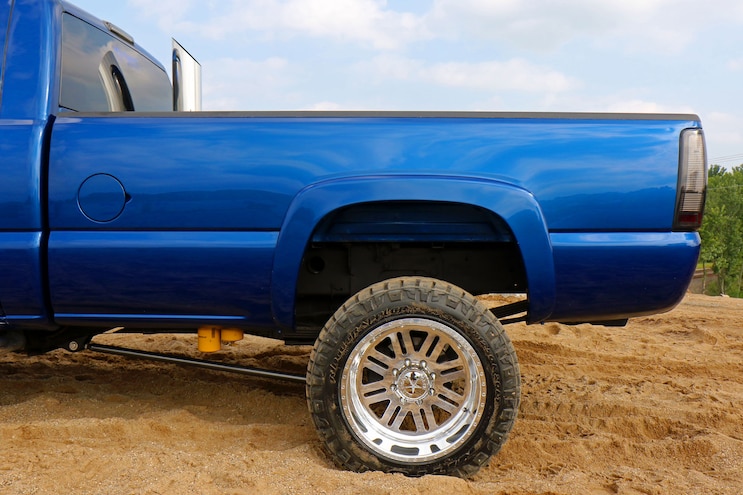 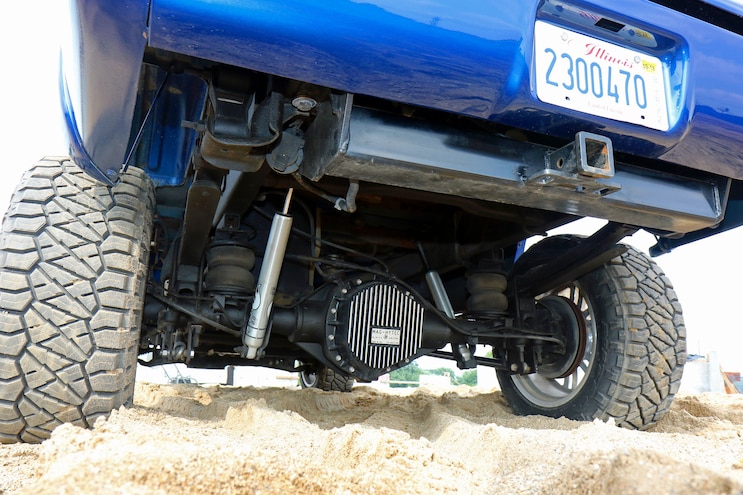 View Photo Gallery | 40 Photos
Photo 24/40   |   A Mag-Hytec differential cover dresses up and adds gear-oil capacity to the stock axle assembly, which is tamed by a set of Fox Factory shocks and a pair of Air Lift air bags for load leveling. 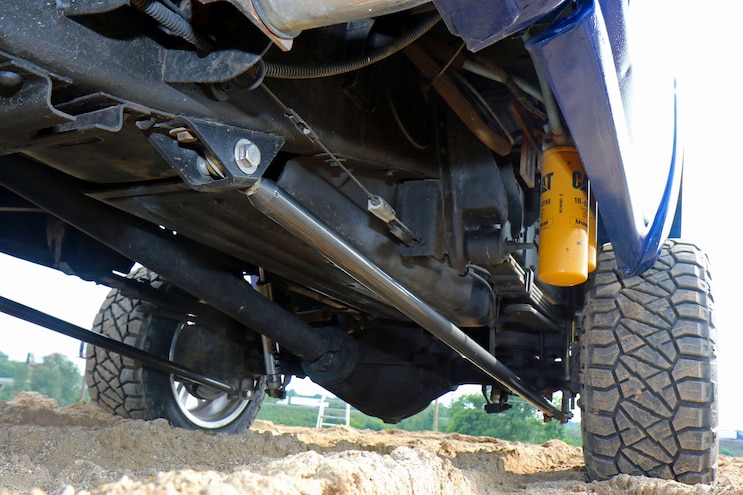 View Photo Gallery | 40 Photos
Photo 25/40   |   From the front side of the axle you can see the fabricated traction bars and the FASS Fuel Systems lift pump. 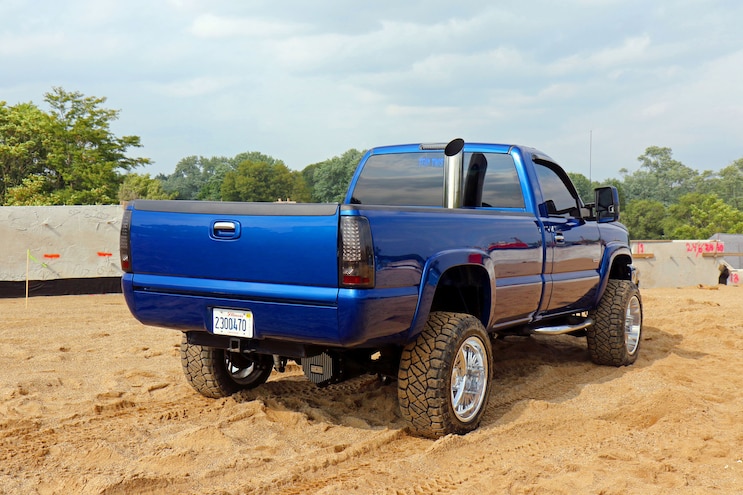