Loads of Torque and Tons of Cargo Capacity… Literally! 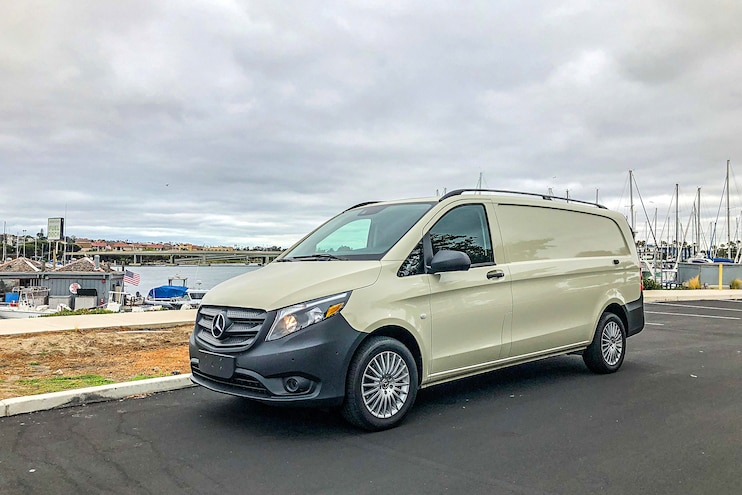 We owe such a debt of gratitude to delivery drivers these days. They are working tirelessly to deliver much needed food, medicine, supplies, and packaged goods to homebound folks around the world. Without these people and their faithful machines, we would be in a world of hurt. When Mercedes-Benz reached out and asked if we'd like to spend a week with a 2019 Metris cargo van, we couldn't help but give an enthusiastic yes.
For those uninitiated to the current van climate, the Mercedes-Benz Metris falls in-between the competition's van sizes. As the only true mid-size van in the United States, Metris is slightly larger than Ford's Transit Connect and Ram's ProMaster City, but slightly smaller than the full-size Transit and ProMaster. The Metris is also rear-wheel drive, which none of the competition can claim. 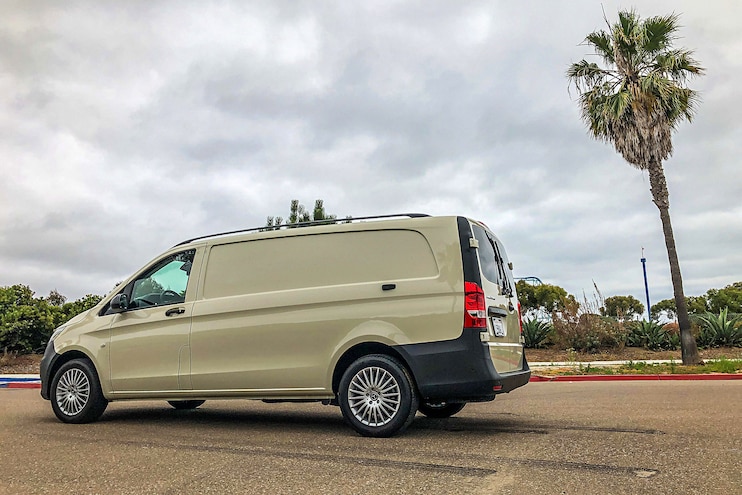 View Photo Gallery | 36 Photos
Photo 2/36   |   003 2019 Mercedes Benz Metris Cargo Van Review
We'll get the ugly out of the way early. Unloaded, the Metris cargo van is loud. This was not unexpected, as our test unit came as it would from the factory. Once a company upfits the van with storage racks and dividers, and loads it with tools or cargo, the harmonics are dampened greatly. You can also hear all of the mechanical bits quite clearly, such as the rear brakes, parking brake, turbocharger, and more.
We were also a bit annoyed with the adjustment mechanism of the seats. Our particular Metris had power lumbar adjustment, but manual everything else. That typically wouldn't be an issue; however, the placement of the backrest adjustment knob is just such so that changes can't be made on the go. In fact, we had to adjust the driver seat with the door open to even reach the adjuster. If only one person drives the van, this might be OK as a set-it-and-forget-it function. However, if the van sees multiple users, adjusting the seat each time will get old. According to the Mercedes-Benz vans website, you can build a Metris with power seats, but then you lose the option for power mirrors, which is equally odd.
And, lastly, we weren't in love with the infotainment screen. Yes, we get it; it's a cargo van. However, we'd still prefer a navigation interface that feels like it's from this decade. With no touch function, no satellite radio, and no Apple CarPlay, it was like venturing back to 2007. If you had to rely on navigation for your business, either in vehicle or on a device, this would be a major pain point. And really, it could be a very simple upgrade in the future. Beyond that, the sound quality from the stereo was actually quite good. We were genuinely impressed with what Mercedes was able to accomplish with just a couple speakers in such an empty space. 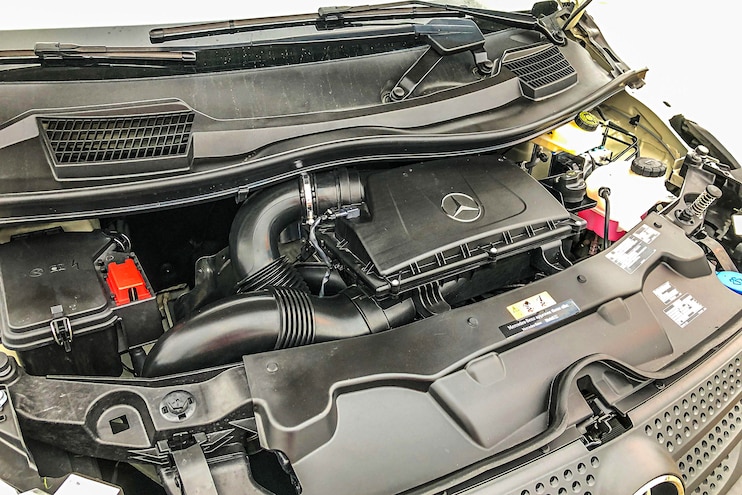 View Photo Gallery | 36 Photos
Photo 3/36   |   033 2019 Mercedes Benz Metris Cargo Van Review
Back to more things we loved: The power and torque from the 2.0L turbocharged I-4 engine was phenomenal. With 258 lb-ft of torque available at just 1,250 rpm, the van shot away from stop lights like a rocket. We now have an appreciation for why the Amazon guy rips around the neighborhood so quickly. Unfortunately, we weren't able to load up the van with its full—nearly 1-ton—cargo capacity (certain constraints bared us from loading up the 2,000 pounds of concrete we normally would have), but we can certainly imagine that even at full payload the Metris will willingly scoot along at a brisk pace. Our only knock against the great 2.0L engine is its thirst for 91-octane fuel. It seems to us that in the world of moving cargo, the ability to load up on the cheapest fuel possible would be a good thing.
What can we say about the handling of a cargo van? Well, it didn't suck. The suspension happily soaked up bumps; the steering was perfectly boosted for the vehicle; and the brakes worked. We loved the shifting of the 7-speed automatic transmission, though question the need for paddle shifters on a cargo van. At almost $40,000, we would have loved to see at least HID headlamps but what was fitted to our Metris worked well. 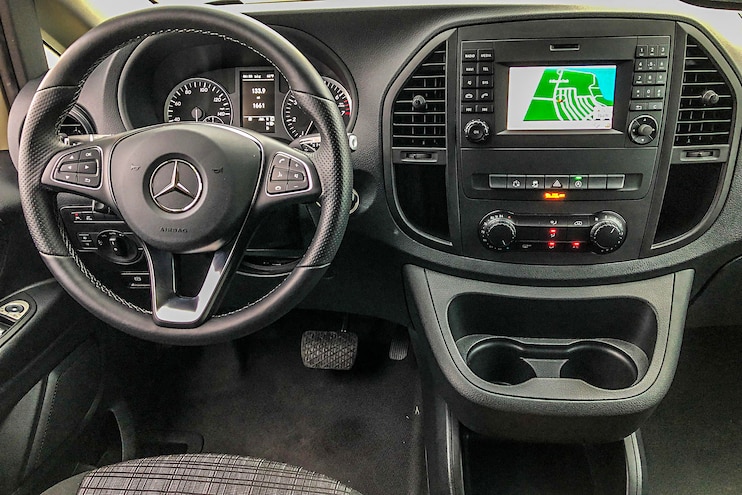 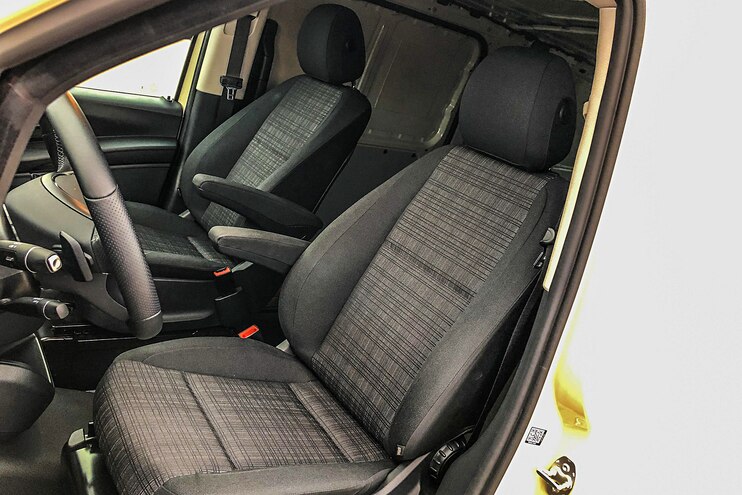 View Photo Gallery | 36 Photos
Photo 5/36   |   007 2019 Mercedes Benz Metris Cargo Van Review
Speaking of lighting, inside impressed the most. A large LED light bar mounted above the rear doors lit up the inside better than daytime and was a $210 option. This feature is a huge plus for any van user. Our test unit also came equipped with roof rails ($400), which are rated to hold just over 300 pounds. The interior rearview mirror was a $55 option, while the windows in the rear doors set us back $531 with tint. We also had the extra battery package, which cost $385 and the cold weather package that included heated seats for $680. The $580 driver comfort package brought to the Metris "comfort" seats with lumbar support. For $1,065, we also had the driver efficiency package, which features an additional storage tray, cruise control, fog lamps, and two extra keys. Rounding out the option package was the $2,300 premium safety package. This provides customers with blind-spot assist (which should be standard), lane departure warning (which worked too late to really be helpful), collision prevention assist, a first aid kit, heated and power sideview mirrors, the aforementioned 4.2-inch display, and a leather wrapped steering wheel. Oh, and we can't forget the $400, 20-spoke, 17-inch wheels. 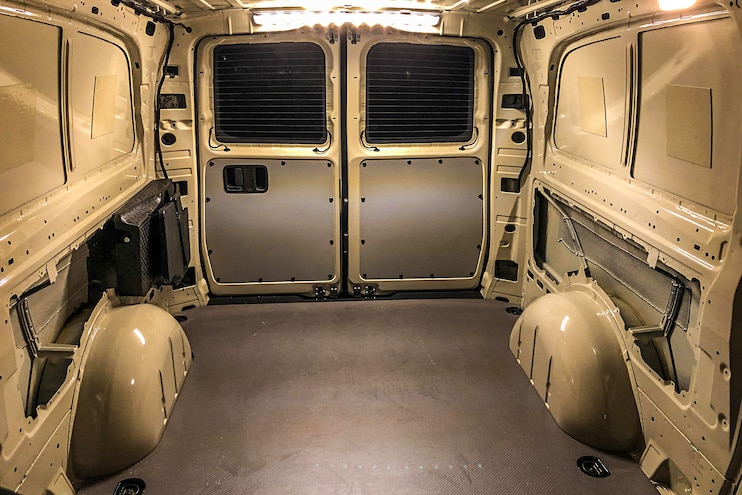 View Photo Gallery | 36 Photos
Photo 6/36   |   023 2019 Mercedes Benz Metris Cargo Van Review
Overall, we were pretty happy with our time with the 2019 Mercedes-Benz Metris. Not because of what it was, in particular, but because of what it can be. The Metris can be had as a cargo van, a passenger van, or as a Worker model. It can also be a camper van when fitted as the Weekender. It has two options for length, one drivetrain, and that's it. It's pure, simple, and functional. And, looking at the new model of the Vito (Metris' counterpart in Europe) there are some really cool features that we're hoping make their way to the U.S., such as an all-electric version. So, if you're looking for a van that's not too big, but not too small and comes with loads of power and endless opportunity, then look no further than Metris.