A Rack Built For The Discerning Enthusiast 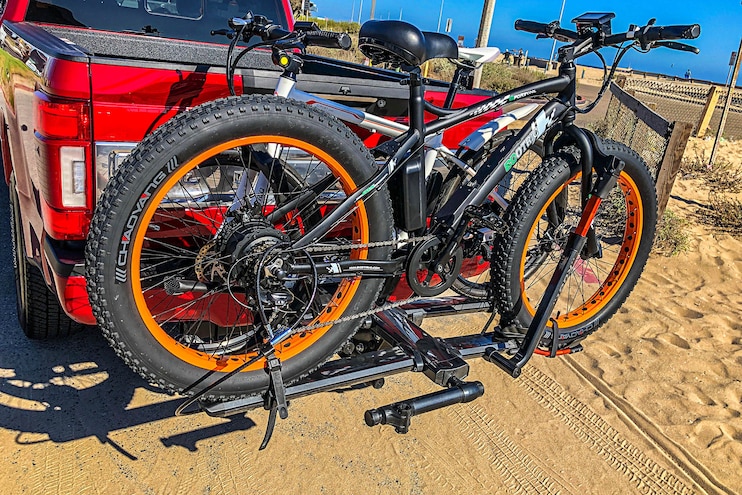 Trucks and SUVs are used for so much more than just work and transportation these days. These vehicles have become instruments of recreation as well. Not only are they used as the recreational vehicle themselves, they also haul our toys and gear. Chief among these toys are bicycles.

Learning to ride a bicycle is a rite of passage for many Americans. And it is a skill that is carried with us all through our adult life. Although bikes can be ridden most anywhere, heading off to mountain trails and beachside paths often requires loading up the bikes and going for a drive. This is where a good, high-quality rack is desirable.

Most SUVs can't hold a full-size bike inside, and just tossing your expensive bicycle in the bed of a pickup isn't a good plan. The best way to prevent damage and maintain storage space is with a hitch-mounted rack, and the NV 2.0 from Kuat is among the best on the market.

The Kuat NV 2.0 is packed with helpful features, such as a foot-assisted pivot system that allows the rack to be lowered from the stored position with just the press of a foot. Also included is a built-in cable lock system for keeping the precious cargo secure, the integrated Trail Doc repair stand that easily extends for service and then stows out of the way, easily adjustable tire cradles, and a hitch cam system that allows for hand tightening in the receiver.

The rack is designed to carry two bicycles weighing up to 60 pounds each, while the rack itself tips the scales at 52 pounds. It will fit bikes with tires from ranging from 20-29 inches, though a 20-24-inch bike will require an adapter, and with a wheelbase up to 50 inches long. By using the company's Phat Bike Kit, the rack can accommodate tires up to 5 inches wide. Need to carry more bikes? The NV 2.0 Add-On allows owners to add two more bike cradles to the rack, for a total of four bikes on the hitch.

We've been using the NV 2.0 to haul around a pair of cheap but heavy E-bikes for a few months now, and we have very little to complain about. The NV 2.0 rack works great, looks fabulous, and gets compliments everywhere we go. We love the cam-lock feature built into the rack to help stop sway and rattle, and especially love that it can be tightened by hand. The ratchet front tire locking system works well, and we love the peace of mind provided by the rear tire straps. Even our 26-inch fat-tire bike fits well with the company's Phat Bike Kit, which really is just an extender for the rear tire strap, and an additional Velcro strap for the front tire. We've had no issues lifting our E-bikes onto the rack, but if yours are too heavy to lift Kuat offers an E-bike ramp for the NV 2.0 as well.

With solid construction, beautiful anodizing, and a lifetime warranty, the NV 2.0 is quite likely the last bike rack you'll ever need to buy. 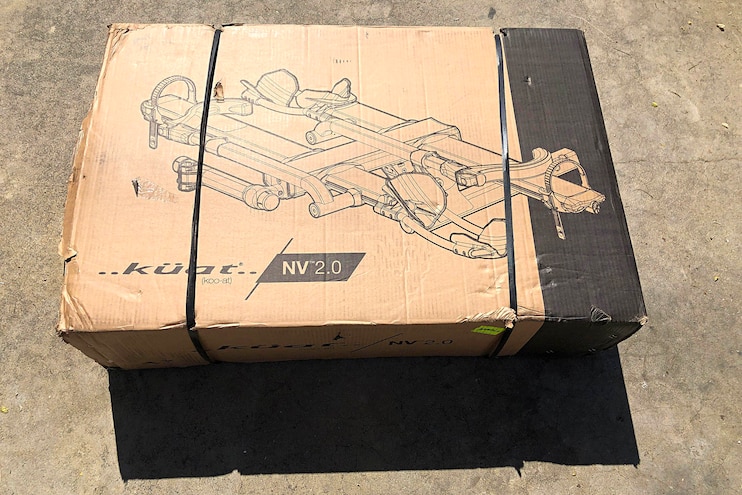 View Photo Gallery | 24 Photos
Photo 3/24   |   The Kuat NV 2.0 comes packed in a rather large box that's quite heavy, naturally. If you can, it's better to pick up from a local bike shop than to have shipped, as your UPS driver will hate you for it. 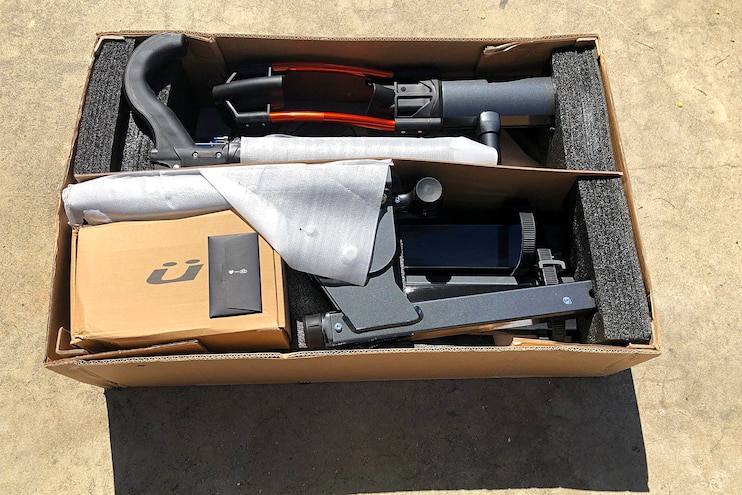 View Photo Gallery | 24 Photos
Photo 4/24   |   Inside the box, the NV 2.0 is smartly packed with plenty of foam to prevent damage. The hardware is boxed separately. 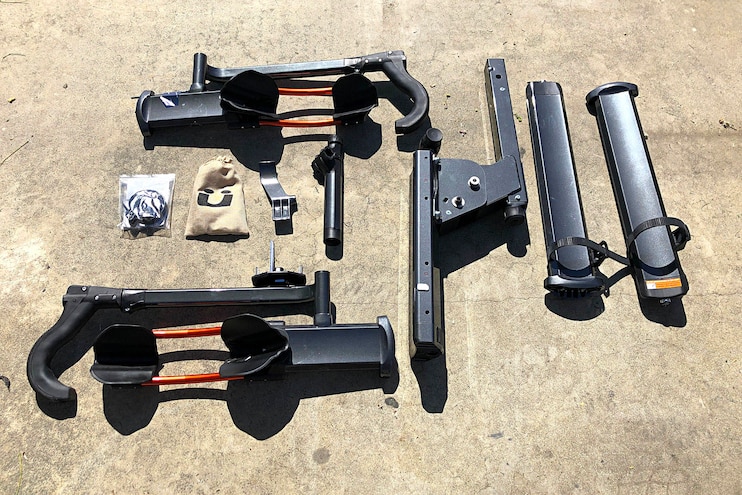 View Photo Gallery | 24 Photos
Photo 5/24   |   Assembling the NV 2.0 rack is pretty straight forward, and all of the tools needed are included. Make sure you have a large area to work before getting started. 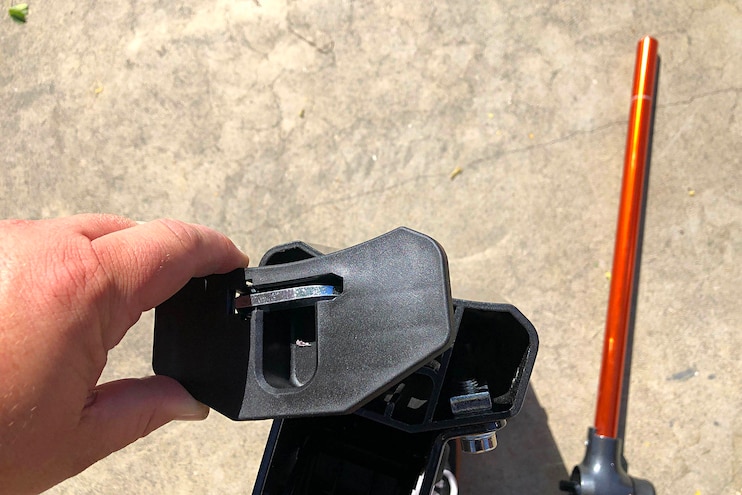 View Photo Gallery | 24 Photos
Photo 6/24   |   One of the first steps in the assembly process is the place the plastic plug into the rear of the main rail. Also, one of the neatest features of the NV 2.0 rack is that this plug houses the Alan key that can be used to adjust the tire saddles or the locking cam. 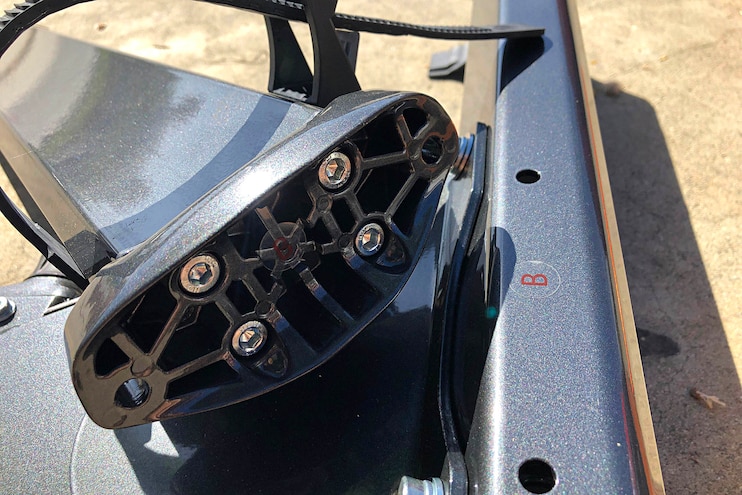 View Photo Gallery | 24 Photos
Photo 7/24   |   The arms come unattached, and it's easy to see where they mount thanks to the provided stickers. Naturally, the two mounts attach as to oppose each other. 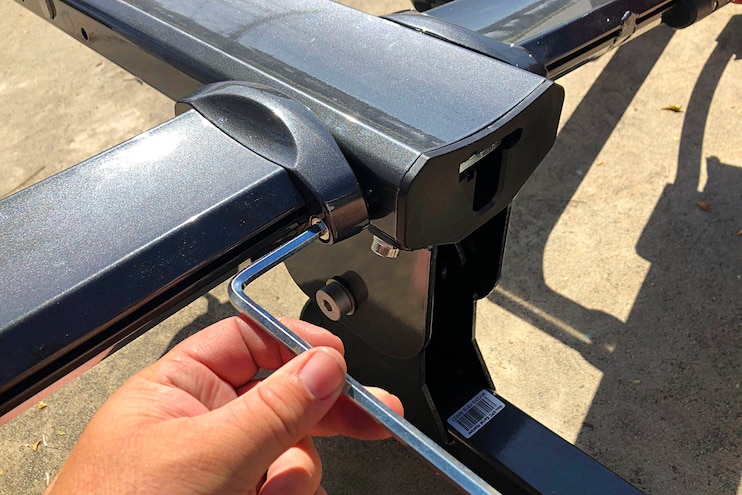 View Photo Gallery | 24 Photos
Photo 8/24   |   Securing the two legs of each mount to the center section of the rack is quite simple. One side of the rack has threaded nuts built in, while the other side is open to accept the provided Allen head bolts. The bolts are placed in the open side, through the center rib, and thread into the second half of the bike tray. Even the needed Allen wrench is included. 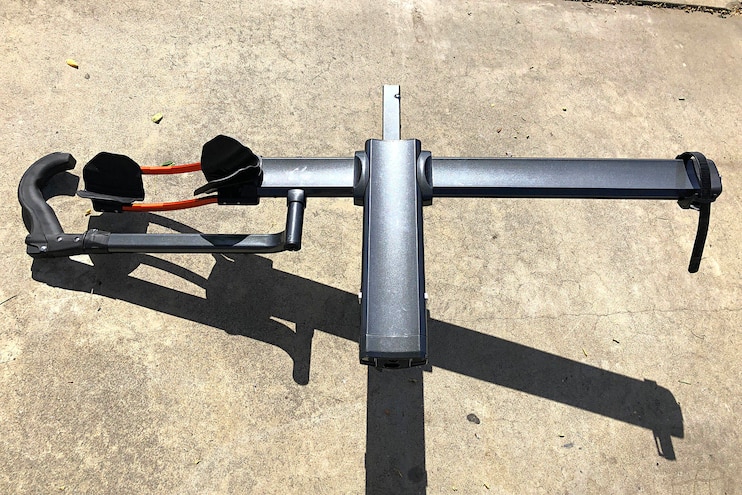 View Photo Gallery | 24 Photos
Photo 9/24   |   Seen here half-assembled, this is the best way to visualize how the assembly is taking place. The second half attaches in the same fashion, only opposite. 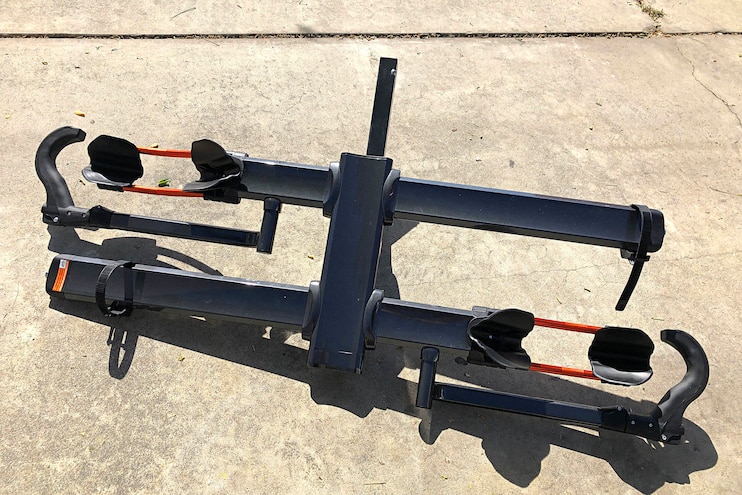 View Photo Gallery | 24 Photos
Photo 10/24   |   Working alone, assembling the Kuat NV 2.0 rack took about half an hour. If you're just a little mechanically inclined, it's quite easy. Kuat even provides a video on YouTube to help guide the process. 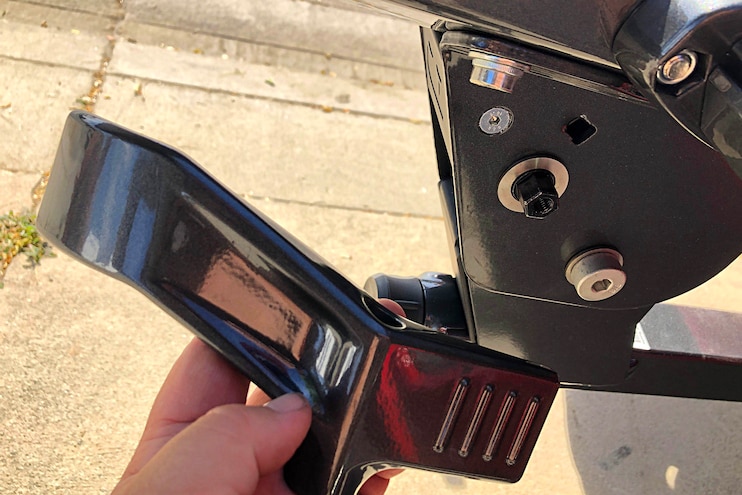 View Photo Gallery | 24 Photos
Photo 11/24   |   With the bulk of the assembly complete, we moved the rack into the hitch mount on our truck. Next up, we installed the pivot handle. This handle controls the motion of flipping the rack up for storage and down for transporting bikes. 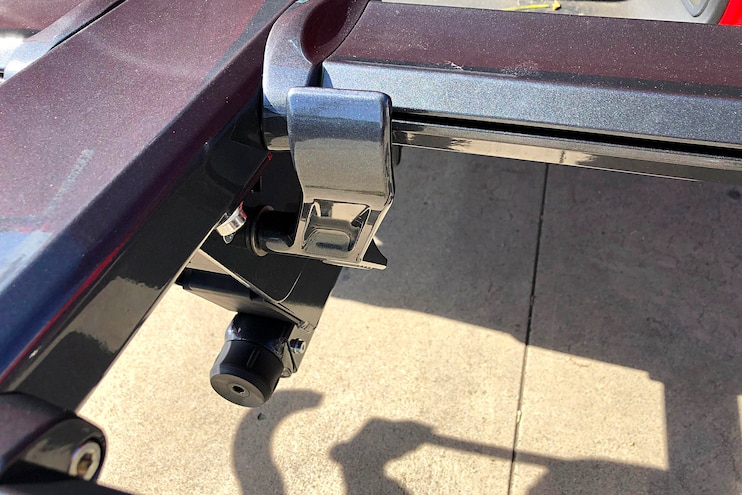 View Photo Gallery | 24 Photos
Photo 12/24   |   One of the neat features of the NV 2.0 is that this motion of lowering the rack can be done by foot as well as by hand. This enables quite a bit of versatility. 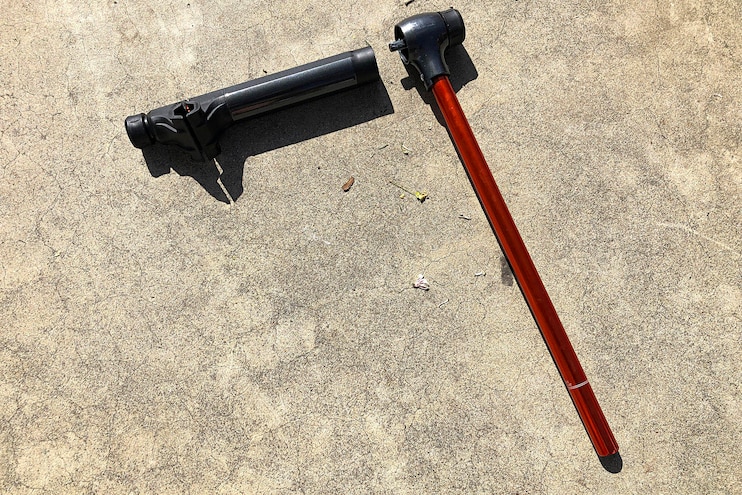 View Photo Gallery | 24 Photos
Photo 13/24   |   The Trail Doc repair stand comes in two pieces, which need to be attached prior to sliding the unit into the rack. The NV 2.0 also comes with a plastic plug in case you'd rather leave the Trail Doc at home or locked in the vehicle. 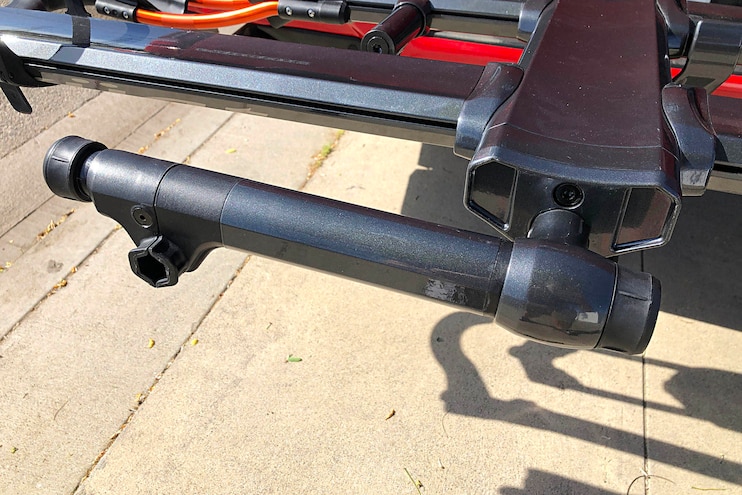 View Photo Gallery | 24 Photos
Photo 14/24   |   Fully stowed, the Trail Doc is rather unobtrusive. When needed for use, the stand extends out of the rack and pivots into whichever position is desired for the repair at hand. 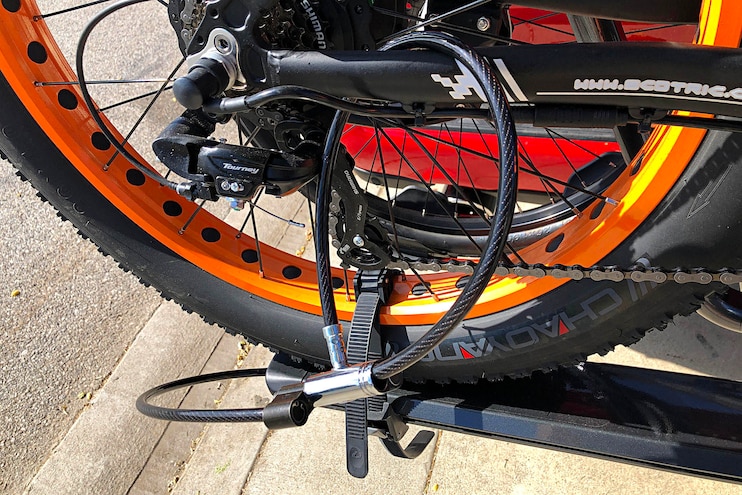 View Photo Gallery | 24 Photos
Photo 15/24   |   Probably the most thoughtful feature of the NV 2.0 is the built-in cable lock. Nothing is worse than having a bike stolen while cooling down with a frosty beverage after a ride. So not having to remember a lock each time is a definite bonus, along with the fact that the two locks are keyed alike. 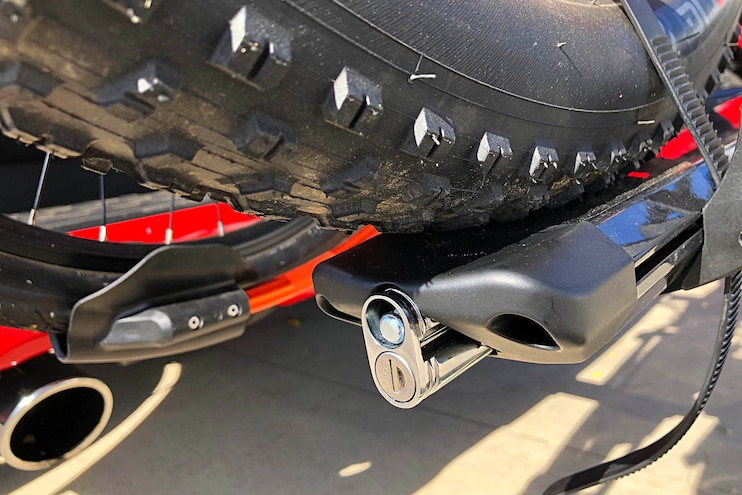 View Photo Gallery | 24 Photos
Photo 16/24   |   When not in use, the cable and lock stow nicely inside the rack. After the cable is retracted, the lock secures in place with a magnetic catch. 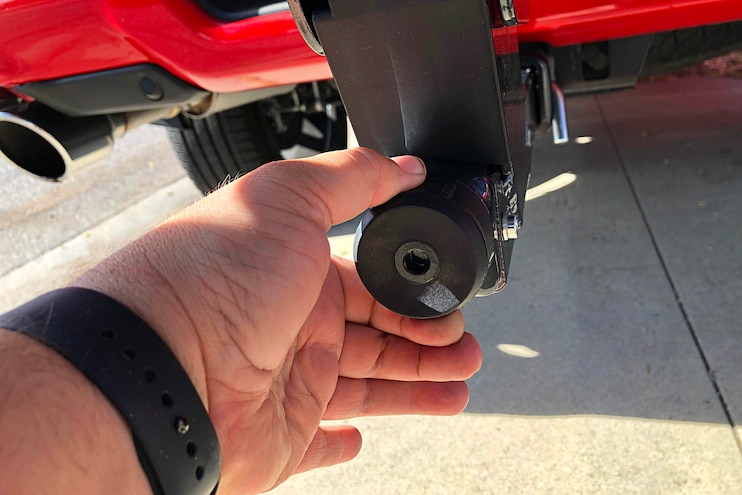 View Photo Gallery | 24 Photos
Photo 17/24   |   Nobody likes a wobbly rack. Thankfully, the NV 2.0 has a built-in cam lock that is operated by hand and tightens the rack snuggly into the hitch receiver. 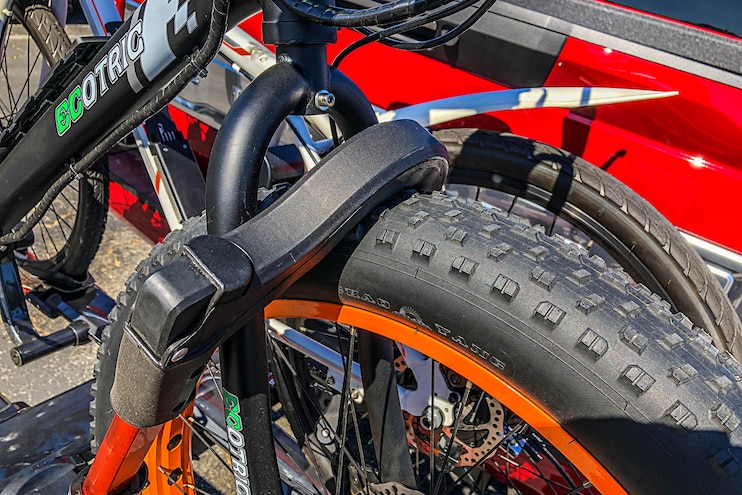 View Photo Gallery | 24 Photos
Photo 18/24   |   To secure the front tire in the adjustable saddle, first release the ratcheting hook and then swing it up and over the front tire. Once over the tire, simply press down to secure. This method of securing works with suspension bikes as well as fixed forks. Tires smaller than 25 inches will need an adapter, however. 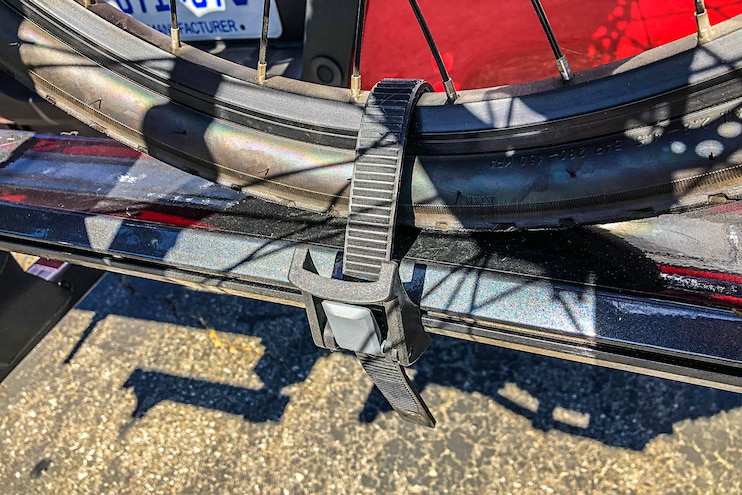 View Photo Gallery | 24 Photos
Photo 19/24   |   Keeping the rear tire planted in place is a quick release ratcheting strap. A quick pull is all that is needed to keep the tire in place. 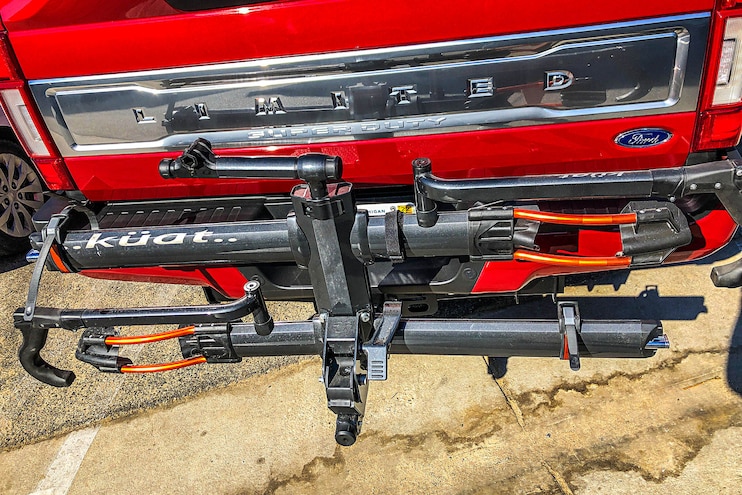 View Photo Gallery | 24 Photos
Photo 20/24   |   When not in use, the rack folds up as to not extend too far away from the vehicle it's mounted to. While we don't suggest leaving the rack in place for extended periods of time, this is a handy feature for while you're out on a ride. 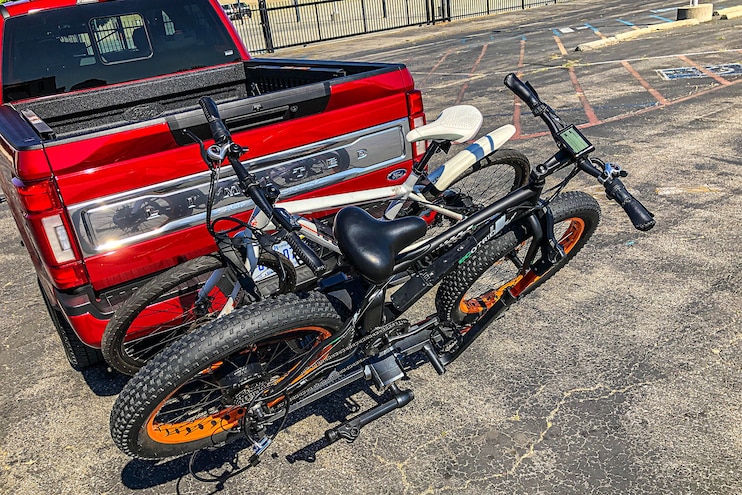 View Photo Gallery | 24 Photos
Photo 21/24   |   The rack also has the ability to tilt forward, even with bikes mounted. This handy feature enables users to gain access to truck beds and lift gates for when they have forgotten to put a helmet away not that that's ever happened to anyone.

Fat tire bikes are getting really popular these days, and thankfully the Kuat NV 2.0 can accommodate these bikes as well—unlike some of the competition. Tires of up to 5 inches in width can fit in the NV 2.0 saddles, and the only thing needed in addition is the Phat Bike Kit. This kit includes an extension for the rear tire strap along with an additional Velcro strap for the front tire, for added peace of mind. The Phat Bike Kit came included with our NV 2.0, but additional kits can also be purchased.