Channeling History in a Modern-ish Machine 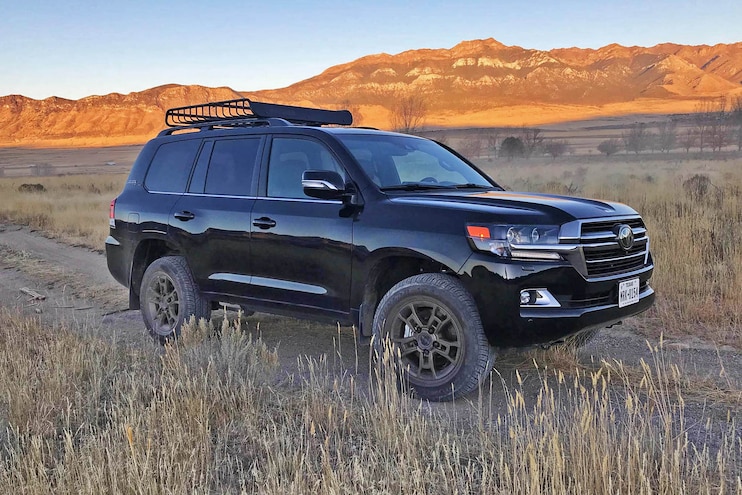 The Toyota Land Cruiser is one of the most legendary off-roaders in history, taking space next to the Willys Jeep and Land Rover Series/Defender for its reliability, ruggedness, and popularity. In fact, the Land Cruiser has been on sale in the U.S.,in one form or another, since 1958. In the intervening six decades, our market has watched the Landie evolve from a simple, open-roofed trucklet to a fun and carefree plaything, then on to a luxury-laden station wagon with world-beating capability. The 2020 Toyota Land Cruiser Heritage Edition seeks to wrap almost all of those features into one package, and we think it does very well indeed. 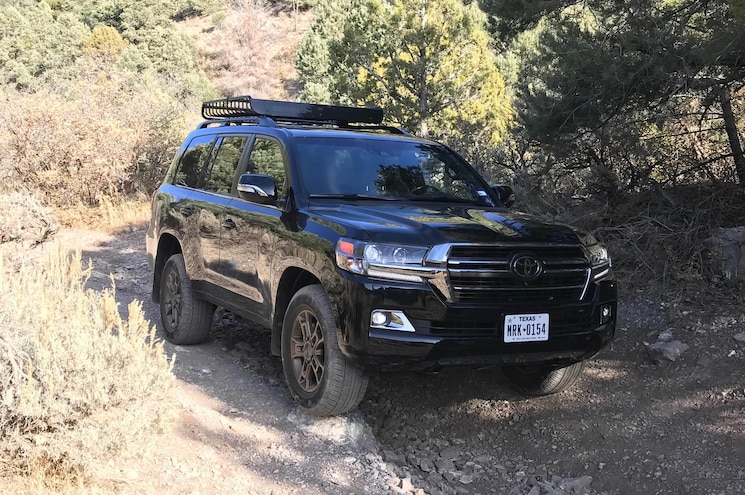 What is the Land Cruiser Heritage Edition?

The 2020 Land Cruiser Heritage Edition is mechanically identical to other trim levels in the lineup. It is available solely as a two-row five-seater, a configuration that maximizes cargo space by jettisoning the Land Cruiser's standard, side-folding third-row jump seats. Toyota also improved the breakover angle by removing the regular SUV's standard running boards, a simple tactic that any current Land Cruiser owner could—and should—carry out right now.

Available in Blizzard Pearl or Midnight Black Metallic, the Land Cruiser Heritage also comes with a few unique styling touches. A dark-finished grille and headlamp bezels do away with the regular SUV's brightwork, and bronze-colored BBS forged alloy wheels add some unique visual presence—although for a Heritage Edition, we think smooth steel wheels would have been a nice touch. Bronze contrast stitching makes an appearance in the otherwise black interior. The final piece of the styling puzzle is a Land Cruiser badge on both D-pillars using a vintage logotype. It's a unique touch that shows that Toyota appreciates the SUV's roots while also tapping into some midcentury nostalgia. 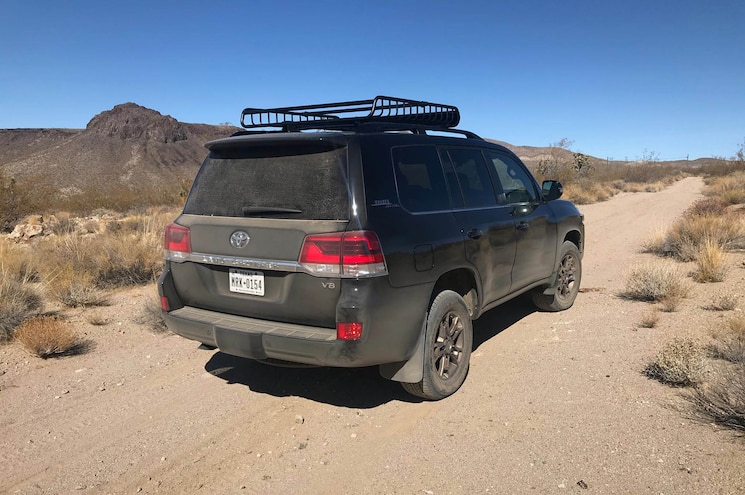 Vintage Feel, Through and Through

The 2020 Toyota Land Cruiser Heritage Edition proffers a decidedly traditional driving experience in just about every way. Dry-pavement handling dynamics are non-existent, and we mean that literally, in that there's just not much handling to be had. The Land Cruiser dispatches cloverleaf onramps with little in the way of under- or oversteer, but there's also not much grip from the Dunlop Grandtrek all-terrain tires. Body roll is the prevailing characteristic, but inadvisably quick transitions are still possible should the need arise. Nimble the Land Cruiser ain't, but it's also far from ponderous.

Its 5.7L V-8 produces 381 hp and 401 lb-ft of torque, delivered with a husky bark that's all but extinct in today's forced-induction world. Booting the Land Cruiser on the pavement didn't result in blistering acceleration, but power comes on smooth and strong, with a reassuring rush delivered directly to your lower back. Unfortunately, with old-school character comes old-school efficiency: Our overall economy over a 930-mile trip was 13.6 mpg, with a test-best tank of 15 mpg courtesy of a 272-mile stretch of straight, flat freeway. 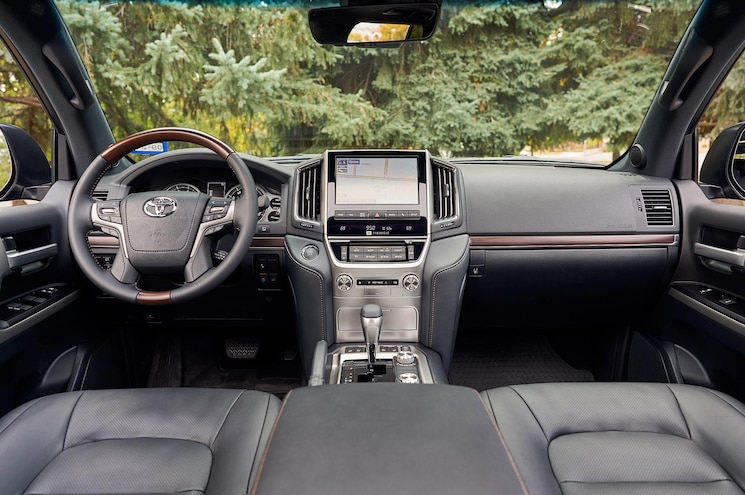 The other unpleasantly retro aspect to the current Land Cruiser is its hopeless infotainment display. The touchscreen is mounted high on a pleasingly styled center stack, but otherwise, it's difficult to operate, and it lacks modern features like smartphone mirroring. Input and output audio from Bluetooth calls were muddy and unclear. This is a machine that would benefit from a wholesale electronics package upgrade and soon.

On the other hand, the vehicle features a few charming oddities we hope never go away. The split tailgate folds down for picnics roadside, the shift lever is reassuringly mechanically connected, and the analog dials and instruments are simple and easy to scrutinize. 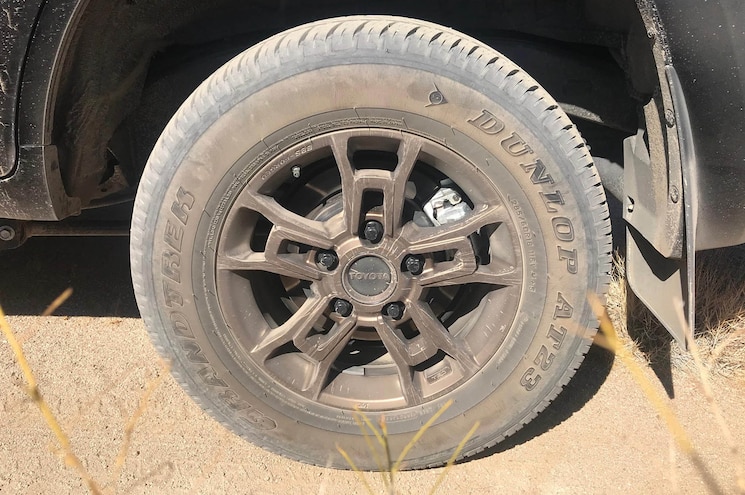 In our time with the Land Cruiser Heritage, it served as a family carpooler for a day or two, and somehow it cuts a more impressive swath than other fullsize SUVs in the carpool line. Amid a sea of Range Rovers and Yukon Denalis, the Land Cruiser still drew admiring stares from onlookers, proving the nameplate's reputation as a rugged and understated status symbol. And as a sedate daily driver, it works rather well, with a smooth and quiet ride, excellent power, and plenty of passenger and cargo space for five.

However, to drive a Land Cruiser solely on-road is like pitching a tent in your backyard and calling it camping. In our long weekend with the Heritage, we spent at least two or three hours a day in the Utah dirt, giving it a fair coating of mud, dust, and prairie pinstriping. (Sorry, Toyota. Our bad.)

Our first outing with the Land Cruiser Heritage took us to the same trails we enjoyed in Toyota's vintage SUVs. Over this terrain, we made good use of the Land Cruiser's excellent wheel travel and traction, including a few jaunts using Trail Control low-speed cruise control. Trail Control also incorporates Off-Road Turn Assist, a feature that actively brakes the inside rear tire in tight corners to improve maneuverability in tight spaces. Both features worked as advertised, although we still prefer to handle brake and accelerator application off-road. 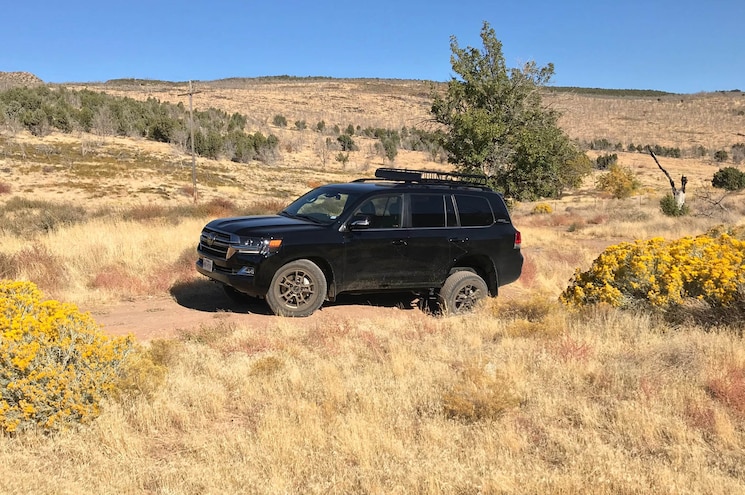 In this terrain, we found ourselves immensely appreciative of Toyota's decision to serve the Heritage Edition sans running boards. While they don't technically add any ground clearance, ditching those low-hanging blocks of plastic improved our confidence when traversing larger obstacles and threading around rocks.

Softly sprung, the Land Cruiser Heritage Edition was most at home once we got it out into the California desert. One narrow, sandy ribbon of path became a 40-mph playground, the Toyota's suspension bounding and rebounding beautifully over the soft-packed road surface with all the control and grace of a racing horse. This particular route cut a large corner between I-15 Southbound and I-40 Westbound, and we were met with smiles and laughter when the Land Cruiser emerged from the dirt road behind a gas station to rejoin the highway, leaving a trail of dust in its wake.

It's in that terrain that the Land Cruiser makes the most sense. As a daily driver, it's safe and comfortable, but woefully inefficient. As a rolling audio system—which is how many SUV owners view their vehicles—the Land Cruiser might as well be an Aiwa boombox for all its technological prehistory. And as a hand-built luxury SUV (which it is), it's not as modern or posh as the more expensive Range Rover or Mercedes-Benz G-Class. But as a go-anywhere, do-anything off-roader, the Toyota is hard to beat. Drawing admiring (or at the very least bemused) stares from passersby fascinated by the fashionable relic, the Land Cruiser Heritage Edition made for a memorable and entertaining weekend of off-roading.