These two Cummins-powered "sleepers" may look stock, but under the hoods are 6.7L engines that crank out a combined 2,215 hp and 3,730 lb-ft torque! 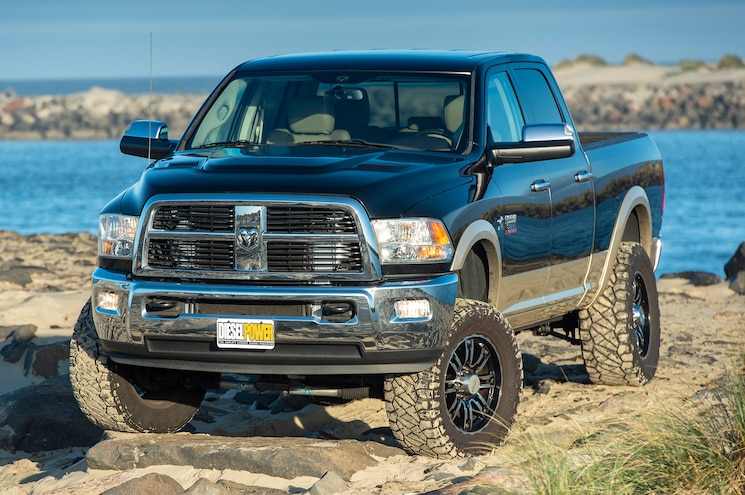 Imagine the surprise on the faces of spectators at diesel drags when they see a stock 2003 Dodge Ram 3500 longbed crew cab 4x4 roll up to the line and then rip off a 10.86-second run at 129.6 mph while all four tires are fighting for traction through the entire quarter mile. Then, a few minutes later, watch as a clean 2011 Ram 2500 Laramie 4x4 in the same Hot Street class posts an 11.5-second, 125-mph run.
Neither one is close to being dialed in according to the owners of the rather plain-looking Oregon-based rigs. There's no reason to doubt them when the compound-turbocharged 6.7L Cummins engine in Rick McAdams' black and tan Quad Cab cranks out 1,050 hp and 1,660 lb-ft of torque and the transplanted 6.7L in Joe Stephenson's silver SLT pushes 1,165 ponies and 2,070 lb-ft torque from a single-turbo setup.
The common denominator isn't just that these trucks are "sleepers." It's that Joe is the diesel technician who did most of the work on Rick's Cummins—and the transplanted 6.7L in Joe's is the original engine out of Rick's Ram. 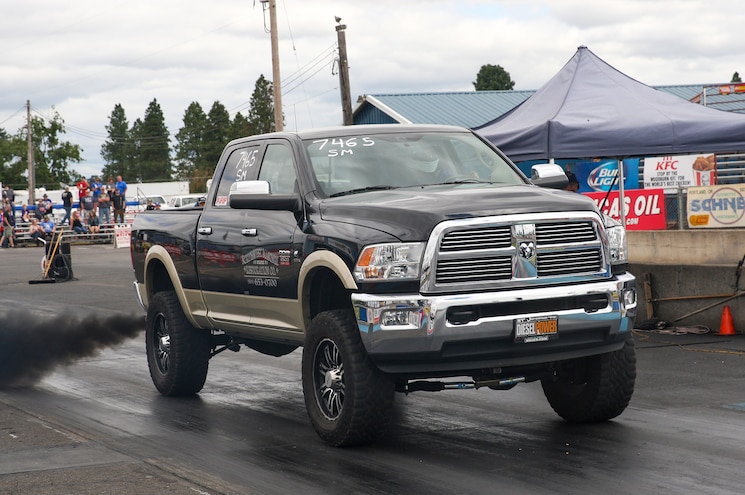 "This is my first diesel pickup, and I bought it new in 2011," says Rick, owner of a masonry firm in the greater Portland area. "It was my daily driver for quite a while. Now, with Joe's diesel-performance expertise, it's my weekend play toy.
"I love to go fast, so the original engine was built up as far as it could go without fear of breaking the bottom end," a smiling Rick continues. "This past summer we pulled that 6.7L out, and Joe put together this one. Right now, I'm happy with where it's at."
And who wouldn't be smiling when there's 1,000 hp on tap? To get there, the new block was bored .020 inch over and anchored with a balanced rotating assembly complete with Carrillo Billet rods, ARP fasteners, .020-over pistons, an Industrial Injection 14mm Gorilla Girdle and Fluid Damper balancer. Joe slid in a Colt Stage 4 cam, set on a CNC-ported cylinder head fitted with oversize valves, locked it down with ARP 625 studs, and then set about handling the fuel and air delivery.
It takes fuel and air to make a Cummins sing. This build has BBI Stage 4 injectors fed by a PPE dual-fueler kit using Motorsport Diesel's 10.6mm stroker CP3/stock injection-pump combination, which gets fuel via twin AirDog 165-gph lift pumps that are plumbed through a modified Fleece Performance fuel distribution block.
Robert Gates, a fabricator at Source Automotive, built the kit to install the S467.7/594 SXE FMW compound-turbo setup that starts with a second-generation-Dodge HH stainless exhaust manifold. On the receiving end is a Pusher high-mount intake system fed by a Mishimoto charge-air cooler. The exhaust is 5 inches from downpipe to tailpipe using Source Automotive's downpipe and a Diamond Eye tubing kit. Power delivery is handled by a RevMax 68RFE Signature Series 850 six-speed automatic (with custom tuning) and a matching Stage 5 torque converter set at stock stall. Rick had custom heavy-duty driveshafts built, stuffed chromoly axle shafts in the factory AAM 9.25 front differential, and had Trutrac limited-slip differentials with 4.56 gears installed front and rear to get the four-ton rig down the track.
The last of the performance modifications was slipping a 4.5-inch RevTek suspension underneath, supplemented with Bilstein 5100 Series shocks, and CalTrac traction bars to help the LT325/60R20 Nitto Ridge Grappler tires stay on the ground when the throttle is hammered. The only exterior frills his truck sports are the AEV hood and AMP Research PowerSteps.
"When first-time competitors see power running boards drop down and this old guy climbing in, I think they are a little bit leery," Rick says. "Like, 'What's up with this dude?' After that first pass, they usually have a surprised look on their faces." 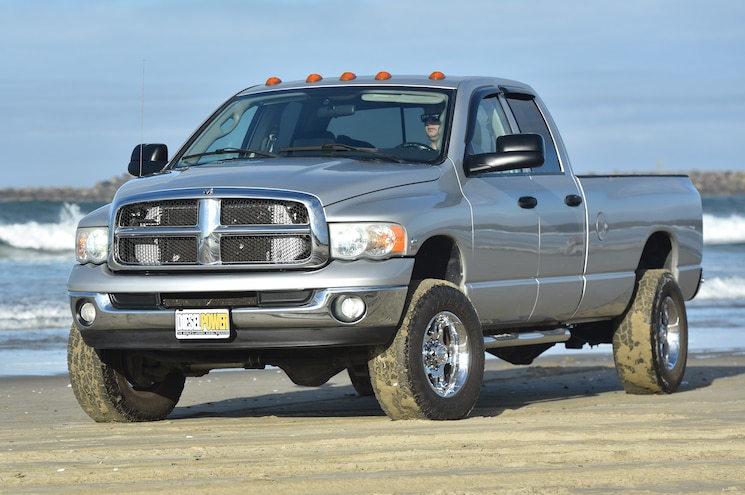 Joe's silver 2003 Dodge Ram 3500 SLT looks like a bone-stock work truck. But it will blow off all four tires in the burnout box as easily as a hot street car would, anytime the diesel mechanic has an urge to show off.
Maintaining traction with 1,165 horses and literally more than a ton of torque going to tires is the biggest problem for Joe at this time. "If I can get the power this new engine makes to go forward instead of up in smoke, it'll be scary fast."
His old race motor, a 1,000-plus-hp 5.9L Cummins, lost a cylinder about three-quarters of the way down the track, and "it still pulled an 11.76 at 120 mph on five cylinders," Joe says. "It just so happened Rick was getting his new engine built at the same time mine broke, so we worked out a deal, and I ended up with his 6.7L core."
The bottom end in the 5.9L was solid, and the Nyes Performance CNC-ported 263cfm head on it was unhurt. So Joe went to work making the transplant happen. "We took the billet rods out of his old engine, bought Mahle coated pistons, put in all new bearings, had it balanced, and anchored everything with put in ARP fasteners. But I didn't do a Gorilla Girdle like on Rick's 6.7L because I wanted to see what we could do without having a block stiffener." 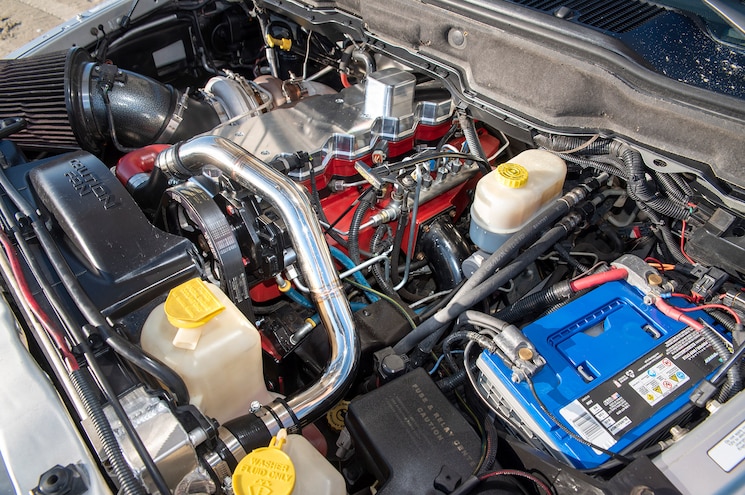 Making the Nyes' 5.9L head fit the 6.7L required some touchy modifications because the latter has steam ports between the cylinders. "To make a 5.9L Cummins' head fit correctly to the 6.7L block, I had to drill those steam port holes," Joe says. "As you can imagine, it's a little nerve wracking when you're standing over a head worth several thousand dollars using the [CNC] mill as a drill press. I was sweating bullets. But it ended up working out fine."
The 6.7L donor block also received a Colt Cams Stage 4 cam with 0.181/0.218-inch lift and 280/323 degrees duration, Mountain High 120-pound valvesprings, BBI Stage 4 injectors, and Source Automotive 7/16-inch pushrods. Joe also used a ZZ Fab Side Draft intake that he fabricated the piping for. It's fed by a single Forced Induction Engineering 76/87/1.1 FMW turbo mounted on a Stainless Diesel second-generation-Dodge T4 manifold.
The young diesel technician says his secret to making his Cummins build so much power is "a lot of fuel, a lot of air, and some good tuning." The fuel system is an ATS Diesel Performance dual CP3 injection-pump kit with stock bottom pump and Motorsport Diesel 10.6mm stroker top pump. Fuel is delivered via a FASS Fuel Systems 150-gph lift pump with boost-compensating pressure regulator and a Fleece Performance Engineering fuel-distribution block. (Joe does his own tuning using a Smarty Touch UDC Pro and "learning as I go. ")

The only big drivetrain modifications Joe has made thus far is a race-built Source Automotive 48RE four-speed automatic transmission, matching torque converter, and a modified stock NV271 transfer case with billet FAT 29-spline input and output shafts all done by friend Robert Gates. He also had custom driveshafts built by Driveline Service in Portland.
"So far, the best time I've turned with the new engine is a 10.86 at 129.6 mph," Joe says. "That makes me a little dejected because I really struggle trying maintain traction with this setup. It's easy to blow all four tires off if I launch too hard." At the time of this writing, his Dodge Ram still had 3.73 gearing in the factory differentials with a Detroit Locker in the rear. (He's running Toyo 285/75R17 A/TII tires.) But further suspension mods, traction bars, a locker up front, and stickier tires are "at the top of my 2020 to-do list."
Does he ever race against his buddy? "We haven't yet," Joe says, flashing a smile at Rick standing a few feet away. "But if we do, I'll turn mine down a bit so the old guy here gets a little adrenaline rush thinking his truck is as fast as mine." They both get a good laugh out of that.

- OF
By Bruce Smith
2 Articles