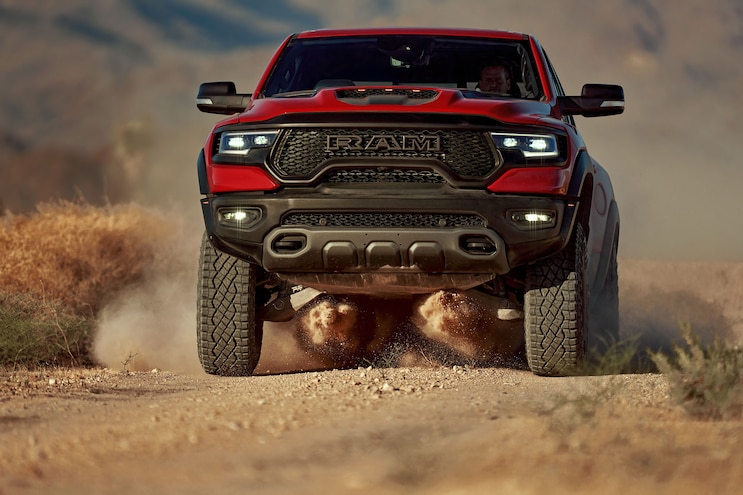 You've seen the memes from all the Ford fans out there who are clearly feeling threatened by the TRX's impending dominance (at least until Ford answers back with their unannounced 2021 third-gen Raptor). With the TRX looking well matched to the Raptor so far, here are ten areas on the spec sheet that Ford will need to beat the TRX to take back the bragging rights from Ram and the company's new TRX. 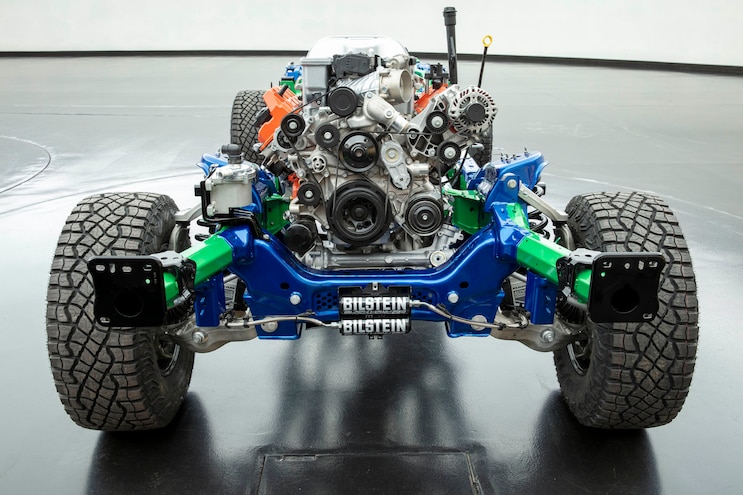 While the Ford Raptor has an impressive 3.5L twin-turbo EcoBoost V-6 that pumps out 450 hp and 510 lb-ft, Ram responds with the most horsepower ever offered in a factory pickup truck by way of the supercharged 6.2L Hemi V-8 with 702 hp and 650 lb-ft. Backed by a heavy-duty eight-speed automatic transmission and full-time transfer case (with low range), the TRX should have no problem making itself known. 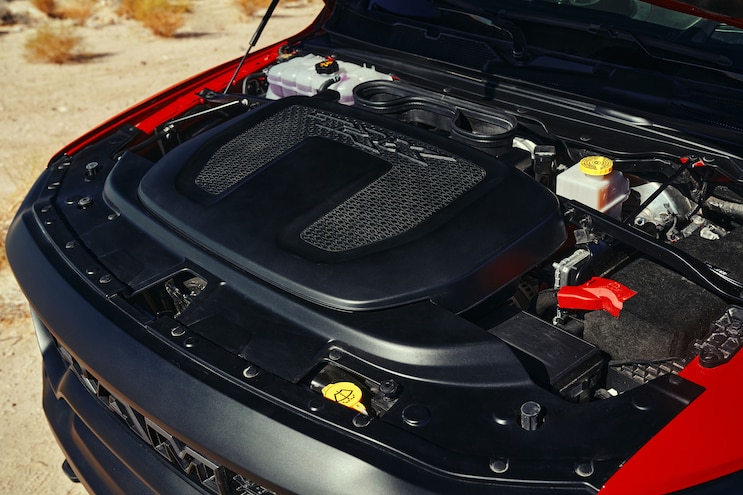 Even in dirty conditions, a 702-hp engine has to breathe, so Ram gave the TRX the biggest air cleaner on the market. Using a unique dual-path intake design that takes airflow from both the top of the grille and through the functional hood scoop, the Ram mixes the air in a giant 29-liter air box that settles out water, dirt, and debris before the airstream hits the dual filter elements. The air filters have four times the dust trapping ability as the competition and provide 198.4 square inches of filter surface area. Ram even positioned the filters where they can be easily accessed for field cleaning. Both the Raptor and TRX have a water fording depth of 32 inches. 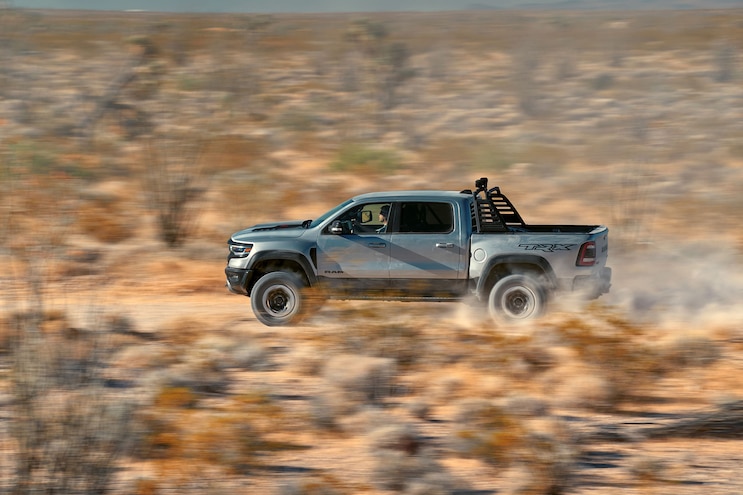 Ram claims the TRX will hit 60 mph in just 4.5 seconds, 100 mph in 10.5, all while blowing through the quarter mile in 12.9 seconds at 108 mph on the way to a top speed of 118 mph. In previous testing, our friends over at MotorTrend were able to hit 60 in 6.0 seconds and cover the quarter mile in 14.7 seconds at 91.4 mph in the current-gen Raptor. If Ram's numbers are even close to the manufacturer estimates, that represents a significant upgrade in performance over the Raptor. Oh, and the Raptor is limited to 107 mph. 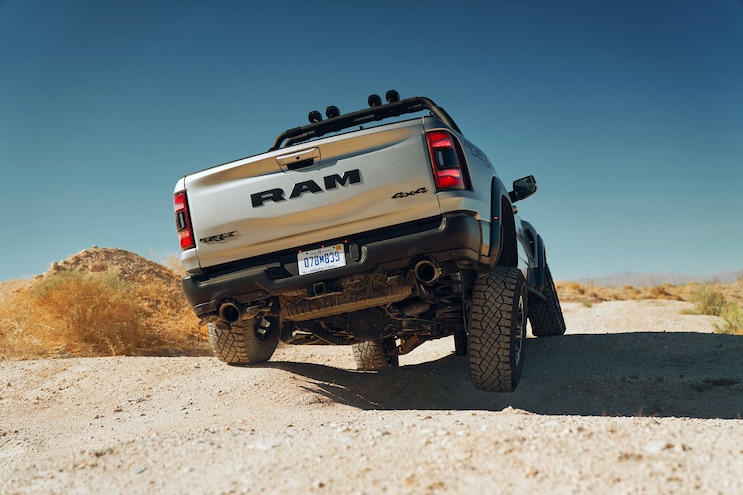 Like the Raptor, the Ram uses a long-travel short-long arm (SLA) independent front suspension. But unlike the Ford, Ram chose to use forged aluminum for both the upper and lower arms. Ram also uses a sliding ball-spline design for the front CV axles for maximum articulation. Out back, Ram has the more compliant suspension design (one Ford is said to be moving to on the next-generation Raptor) based on Ram's exceptional link-coil design. On the TRX it has been beefed up with steel arms, new geometry, and the tallest coil springs ever mounted on a consumer vehicle. 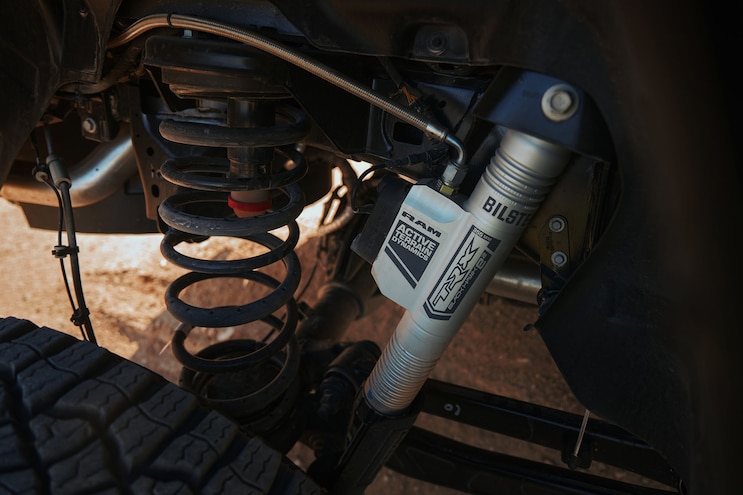 Featuring four-corner semi-active Bilstein Black Hawk e2 dampers, the TRX has the sizable advantage in damping. The aluminum-bodied shocks use three pistons and are infinitely adjustable on both the compression and rebound circuits depending on the feedback from sensors placed all around the vehicle. Being able to detect and adjust for everything from highway and towing to braking and rough roads, these technological masterpieces are the most sophisticated suspension system ever bolted to a factory pickup. The front shocks even include a hydraulic three-stage jounce cutoff (JCO) inside the body for the ultimate in packaging efficiency. The Jekyll and Hyde TRX was designed for sustained speeds of 100 mph over rough terrain and a comfortable highway ride for when the truck isn't mobbing down some forgotten desert two-track. 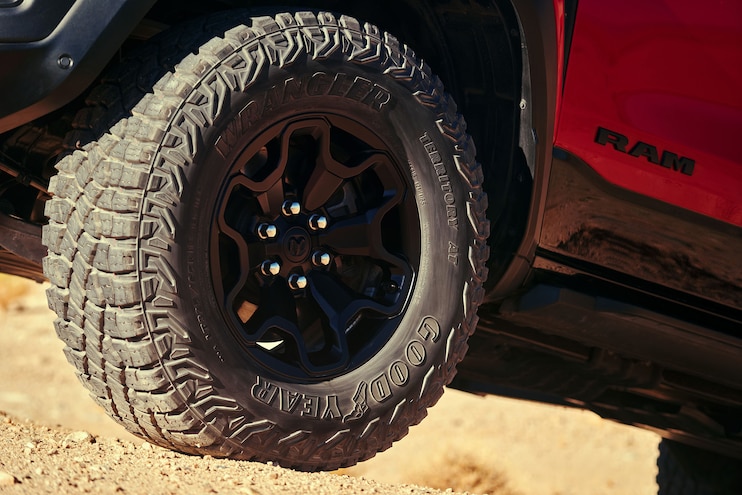 There is nothing wrong with the Raptor's LT315/70R17 BFGoodrich All-Terrain tires. They measure 34.4 inches tall and 12.4 inches wide and are a go-to option in the off-rod industry. However, Ram took the tire technology a step forward with the LT325/65R18 Goodyear Territory tires, designed specifically for the TRX's unique use case. Not only are these tires a hair taller at 34.6 inches, but also wider at 12.8 inches, giving the TRX an even more menacing stance. These tires also carry a "T" speed rating, which allows the TRX to run at sustained speeds of up to 118 mph while still being tough and aggressive enough for high-speed desert running and rockcrawling. 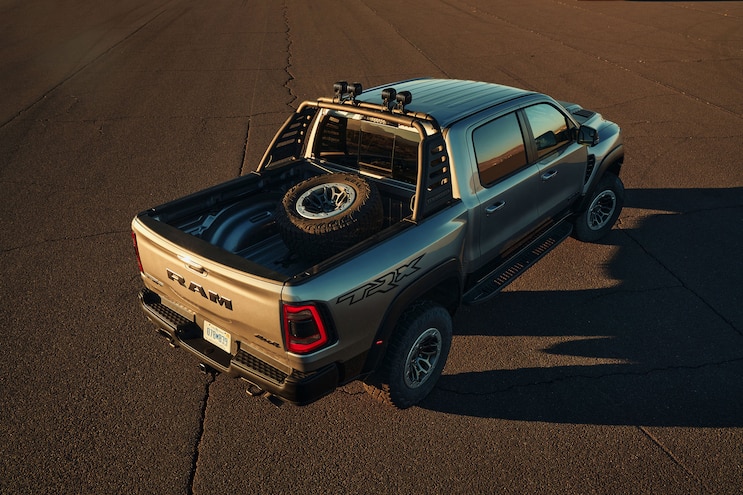 The Raptor SuperCrew is rated for 1,200 pounds of payload, which is a solid number for the class, but the TRX trumps it with a rating of 1,310 pounds. While an extra 110 pounds doesn't sound like a whole lot, that extra capacity that can go toward an additional passenger, 13 gallons of extra water, or even 17 gallons of supplemental gasoline. 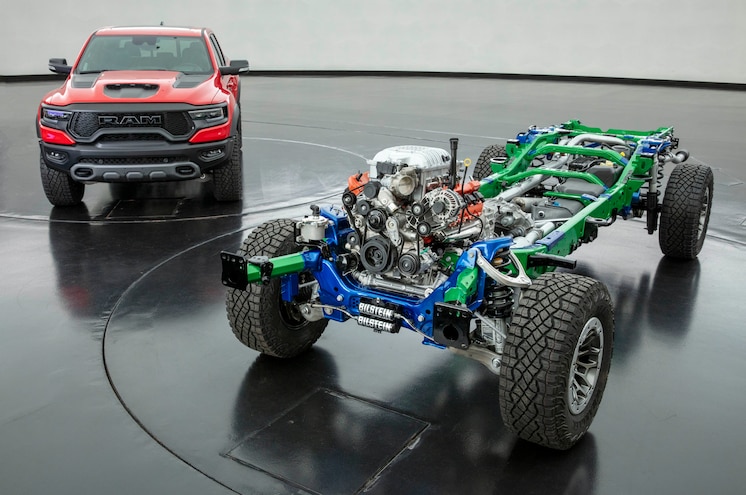 The towing nod also goes to the Ram TRX with a rating of 8,100 pounds, besting the Raptor by 100 pounds. What this means is that neither truck is afraid of doing work, but 100 pound is 100 pounds, and in this comparison, the spec sheet rules. 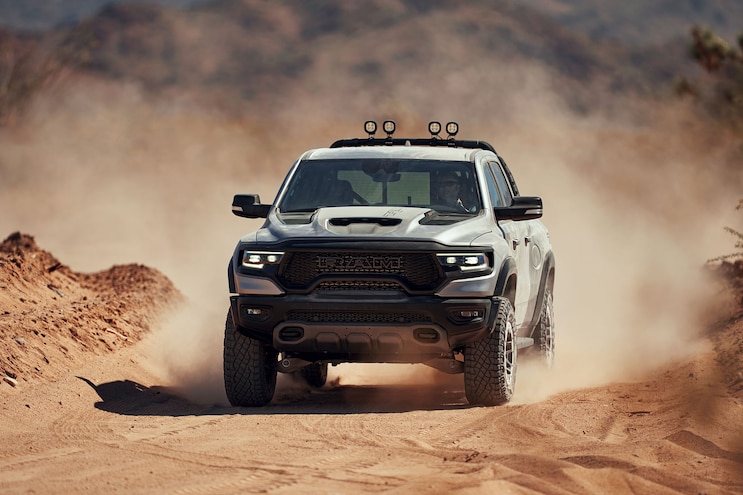 Despite having similarly sized tires and the Ram TRX rocking a big ol' Dana 60 out back, Ram claims a best-in-class ground clearance number of 11.8 inches. This compares favorably to the Raptor's published ground clearance of an also impressive 11.5 inches, but the TRX gives you that extra margin that matters in the dirt. 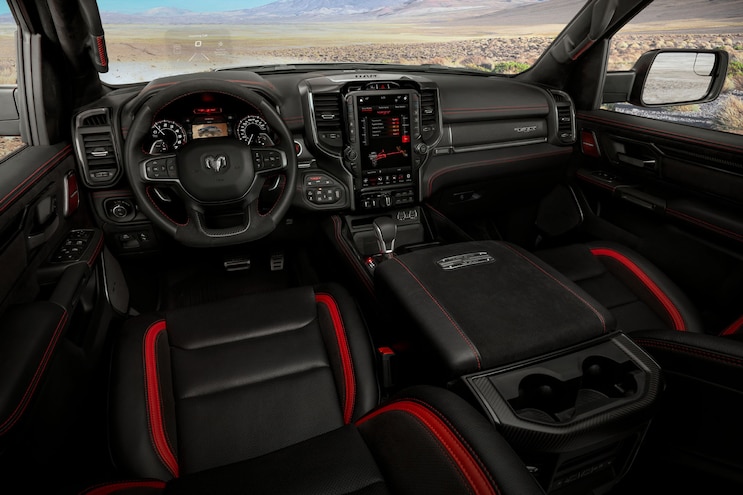 The Ram already has an interior that is the benchmark in the half-ton class, so taking the top trim of the TRX and pushing that idea of sporty luxury even further, gives TRX the advantage. With materials that will rival high-end sports cars and luxury makes alike, there is a ton to love about the TRX interior. As a bonus, all trims of the TRX, including the cloth TR, come with the excellent 12-inch screen standard, and who can argue with the quality of Ram's optional 19-speaker, 900-watt Harmon Kardon sound system? Not that you'll need it with all the music emanating from the hood and being pumped out from those giant 5-inch exhaust tips.
To see our counter story of the 10 ways the Ford Raptor beats the 2021 Ram 1500 TRX, click here.