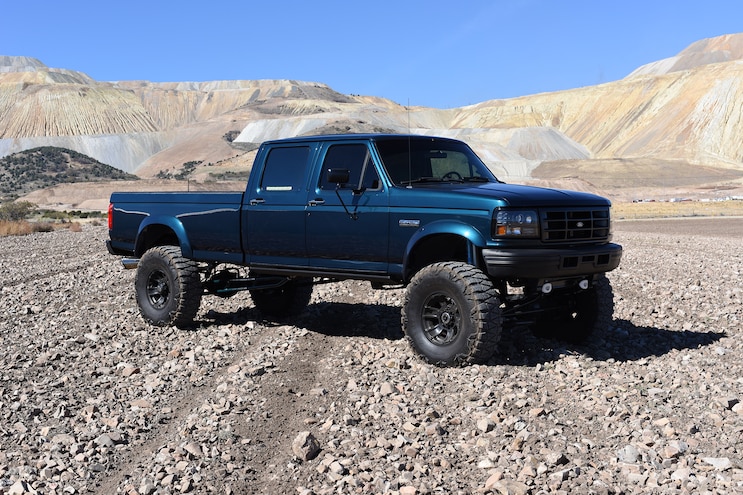 There are certain things that make a large impact on our lives as diesel-performance enthusiasts. In many cases, our tastes and preferences are formed by the experiences we had as kids and by the people we shared those experiences with. That’s one explanation as to why a 25-year-old would go hunt down a truck that was manufactured right around the time of his seventh birthday. As one of the capable members on staff at Industrial Injection, Alec Hembury is familiar with the diesel scene as a whole, and he has owned other trucks (like a modified Cummins-powered Dodge Ram) in the past.
“This F-350 got my attention for a couple of reasons. One of them was because my dad had one like it when I was growing up,” Alec tells us. “Also, it is tough to find a crew cab, longbed truck. So, when this one came up for sale, I had to grab it.” And, as the truck’s second owner, Alec is glad he purchased it, because with a little more than 130,000 miles on the odometer when he bought it, the tried-and-true 7.3L Power Stroke engine was just starting to break in. The truck was very well maintained by the first owner, who used it to pull a recreational trailer and a boat. 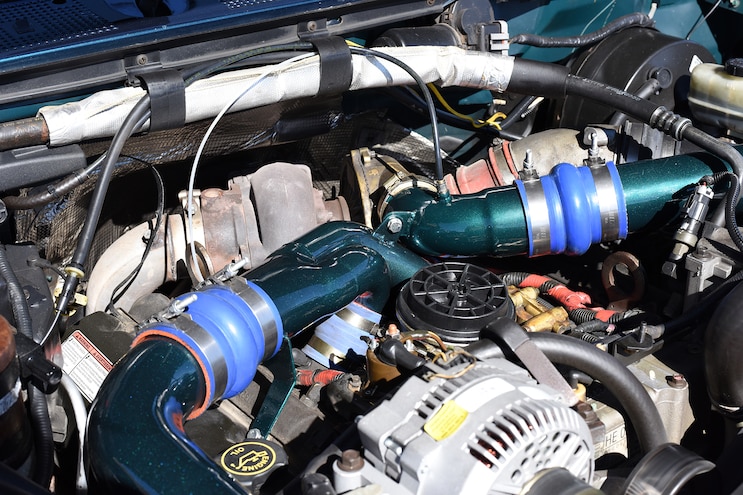 View Photo Gallery | 58 Photos
Photo 2/58   |   003 1997 Ford F 350
You’d expect that for someone working in the industry and knowing the ins and outs of diesel, Alec would go with an aggressive approach regarding the modifications to his truck. Nothing could be further from the truth, however, as Alec took a more measured direction, with attainable goals that make the truck do everything he wants it to do. If you’re just getting started in the diesel-performance hobby, pay attention. Using Alec’s model is a fantastic way to approach a build.
“With the basic upgrades we have completed so far, the truck puts down 400 hp to the tires,” Alec says. “My ultimate goal is to someday have it in the 500 to 550hp range.” Again, he’s not trying to reengineer the wheel, he just wants a reliable rig that will tip the scales at about 8,000 pounds and run 13-second e.t.’s at the dragstrip, while wearing 40-inch Nitto Mud Grappler tires. The advancements made by the aftermarket make these goals more than reasonable. 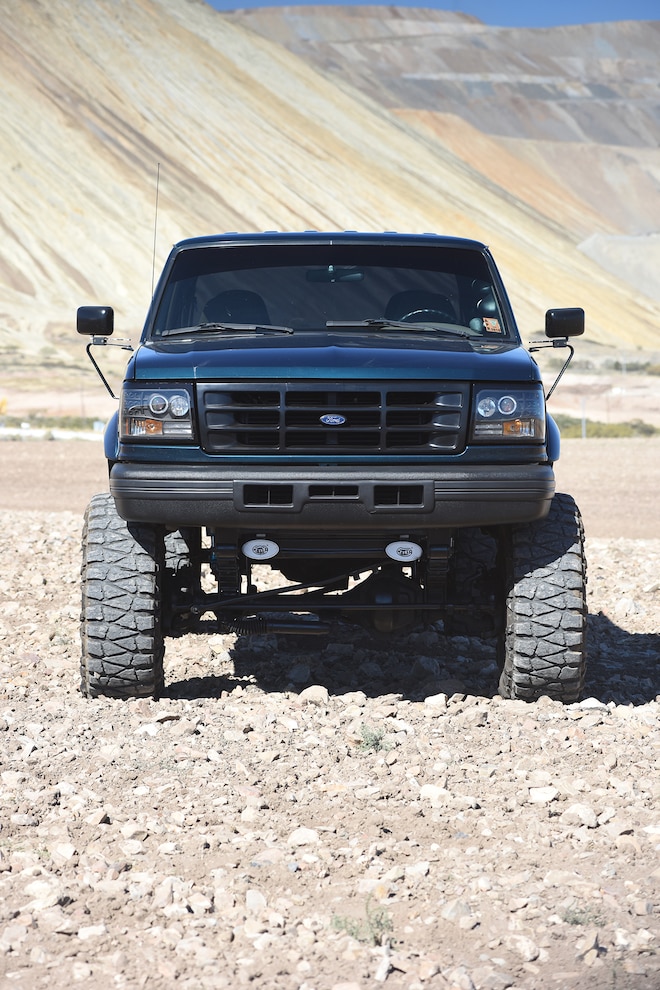 View Photo Gallery | 58 Photos
Photo 3/58   |   028 1997 Ford F 350
Naturally, the engine is the heart of this long, green Ford. The pieces that deliver 400 hp and 780 lb-ft of torque to the tires start with an S&B air intake and a Banks Power intercooler. Those components lead to a stock Garrett turbocharger that has been upgraded with an Industrial Injection .84 A/R turbine housing. Moving on from there, a set of Industrial Injection’s 80hp Stage Two injectors fuel the fire, and a Diamond Eye Performance downpipe and Magnaflow stainless steel exhaust tubing move spent gases out. A six-position selector and custom tuning by Power Hungry Performance complete the package.
Alec says he plans to improve his truck’s induction system by installing a BorgWarner S300 or S400 turbo kit. That, plus a more aggressive camshaft, fuel delivery upgrades, and more, should get the next 100 to 150 hp. “The truck is actually my daily driver, and with the modifications I’ve made so far, the driveability has not diminished at all,” Alec says. “Anyone can hop into this thing and drive it. It is a lot of fun.” 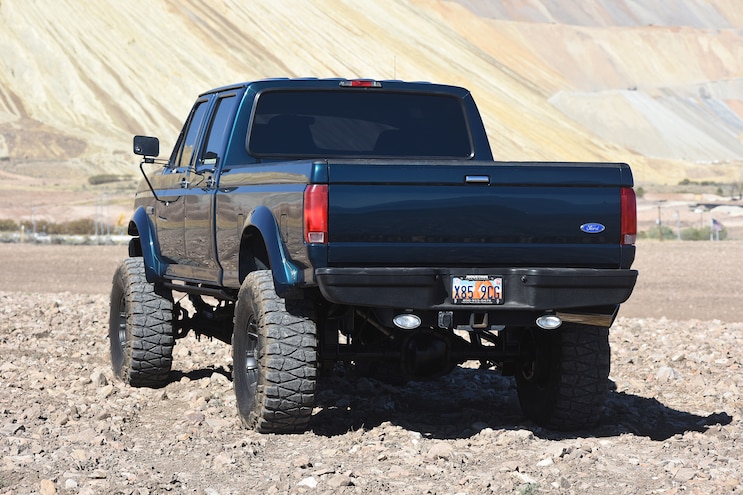 View Photo Gallery | 58 Photos
Photo 4/58   |   031 1997 Ford F 350
Alec has also been proactive in upgrading one particularly important part of his truck: the transmission. While the Ford E4OD four-speed automatic shifted fine in stock form, he knew the combination of extra power, a bigger wheel and tire package, hitting the dragstrip, and a generally heavy right foot could take its toll quickly. So, he enlisted Randy’s Transmission to overbuild the gearbox, using SunCoast Transmission Products’ billet components throughout the unit, a SunCoast billet torque converter, and all of Randy’s experience. The E4OD is now a rock-solid transmission that stands up to repeated 15-second (at more than 80 mph) dragstrip blasts at Rocky Mountain Raceway. Of course, Alec expects his truck to be much quicker after it’s been fully upgraded.
One of the things that makes the truck so eye-catching is a healthy 7.5-inch lift that’s created with an Off Road Unlimited reverse shackle kit, custom springs, blocks, and the previously mentioned big tires. Alec says he has not owned anything that gets as much attention as the big F-350. If you’re wondering how he keeps his Ford so pristine, Alec’s rig lives the majority of its life on asphalt—not on the trail, crawling over rocks and slogging through mud. That being said, the look is well executed and the big truck appears ready to tackle any obstacle it encounters. 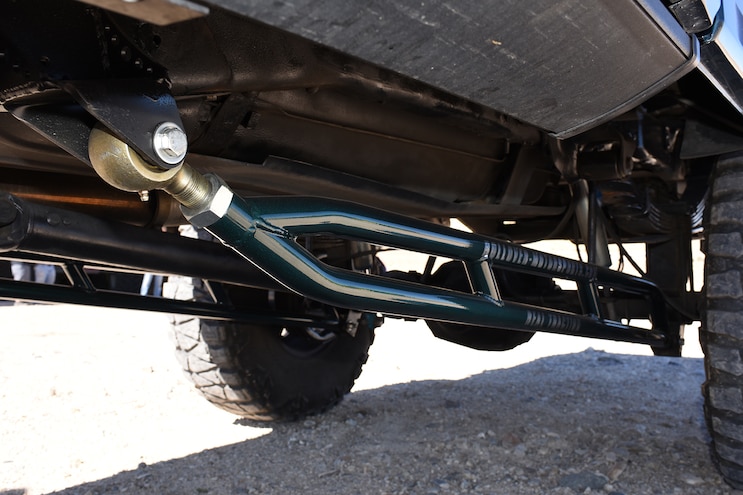 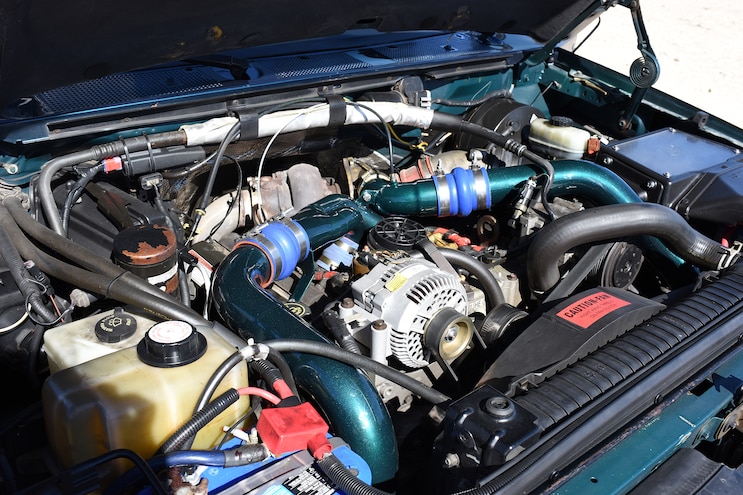 View Photo Gallery | 58 Photos
Photo 6/58   |   002 1997 Ford F 350
Ford produced and installed millions and millions of 7.3L Power Stroke V-8 engines over the years, and the turbocharger below the cowl is a familiar sight to old-body-style Ford lovers. The engine’s robust architecture made it a popular powerplant of its era. While many longtime diesel enthusiasts now support newer-generation engines, the 7.3L still has plenty of devotees. 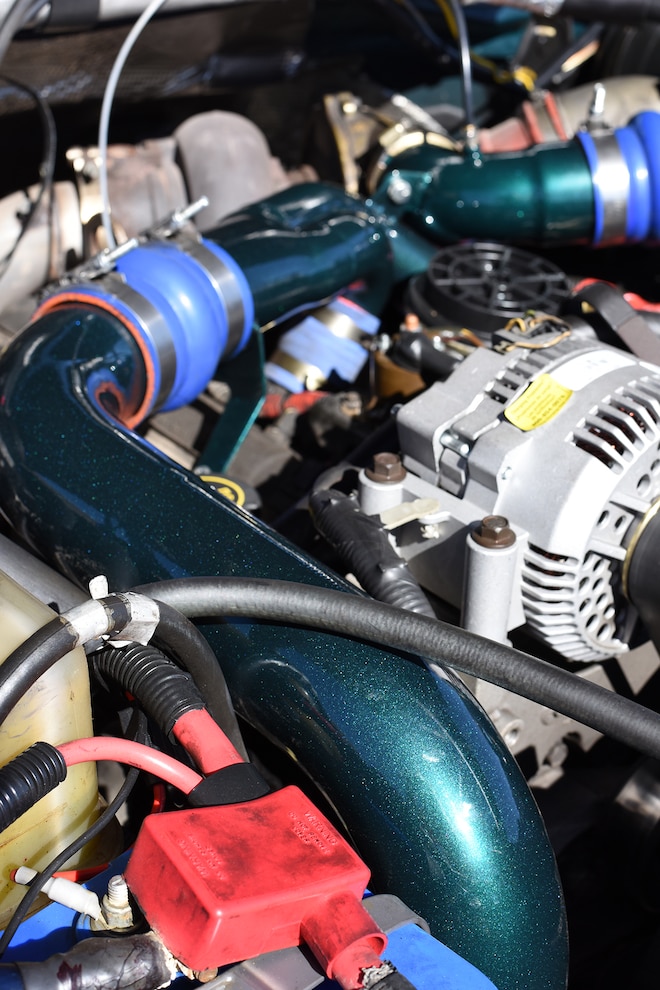 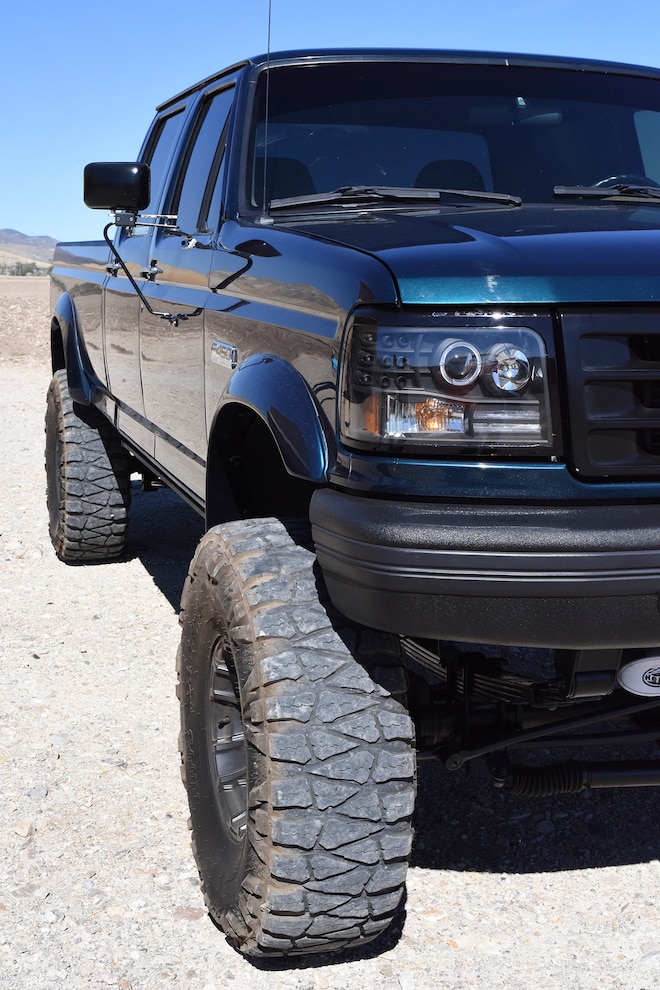 View Photo Gallery | 58 Photos
Photo 8/58   |   011 1997 Ford F 350
With more than 7 inches of lift, 40-inch Nitto Mud Grappler tires on the corners, and the crew cab longbed look, this truck has a presence that even the wide-open spaces of its native Utah can barely contain. 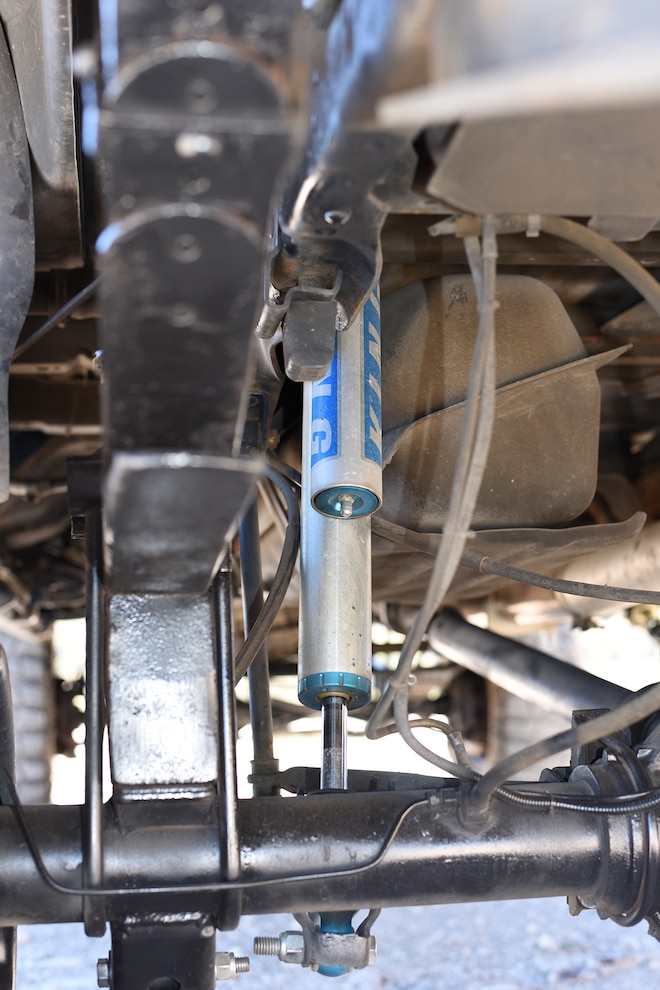 View Photo Gallery | 58 Photos
Photo 9/58   |   048 1997 Ford F 350
While the turning radius may not exactly be narrow, there are some strong benefits to this long wheelbase: notably the ride quality. Alec tells us that many people are shocked by how well the truck rides, and the King Off-Road piggyback reservoir shocks play a big part in that. 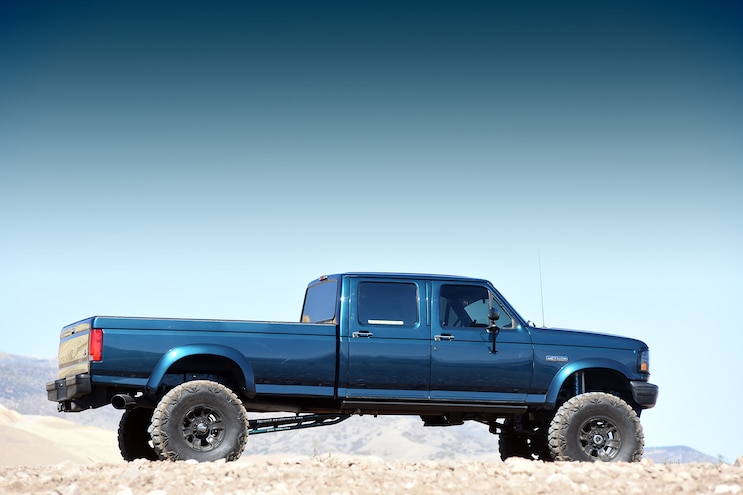 View Photo Gallery | 58 Photos
Photo 10/58   |   027 1997 Ford F 350
The classic looks of the Ford old-body-style trucks are tough to improve on. After all, their simplicity and strong lines are what make them so popular in the first place. The blacked-out bumper and additional foglights update the nose with a more contemporary style. 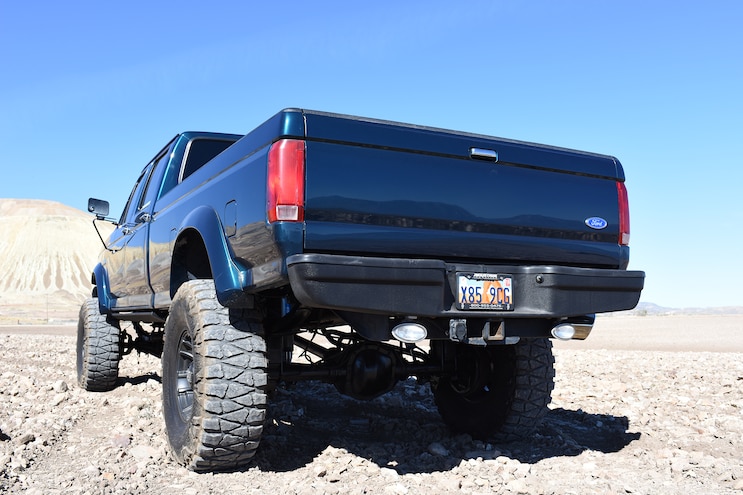 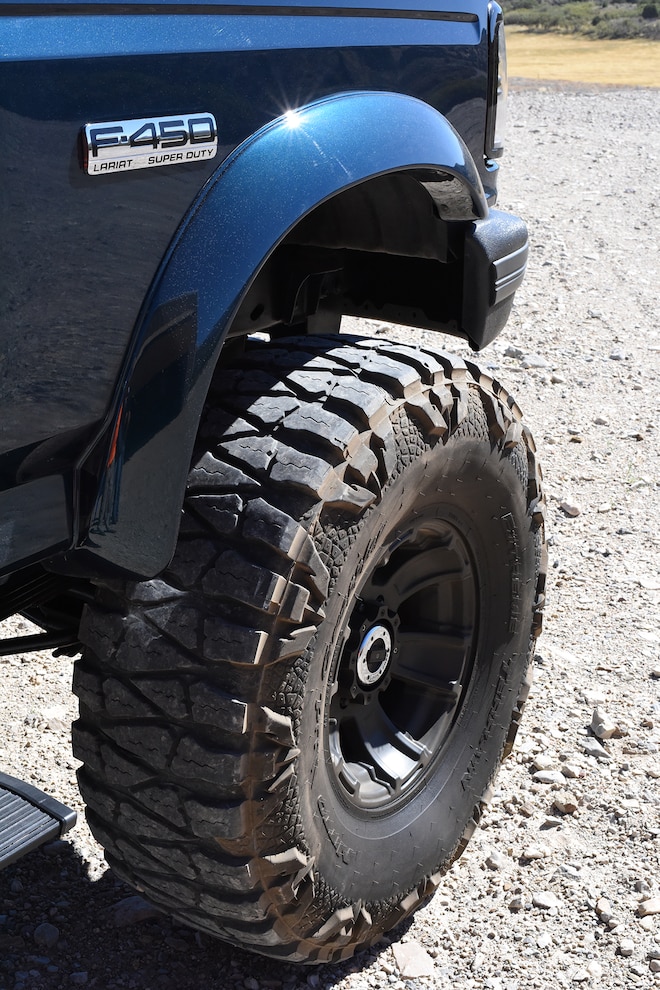 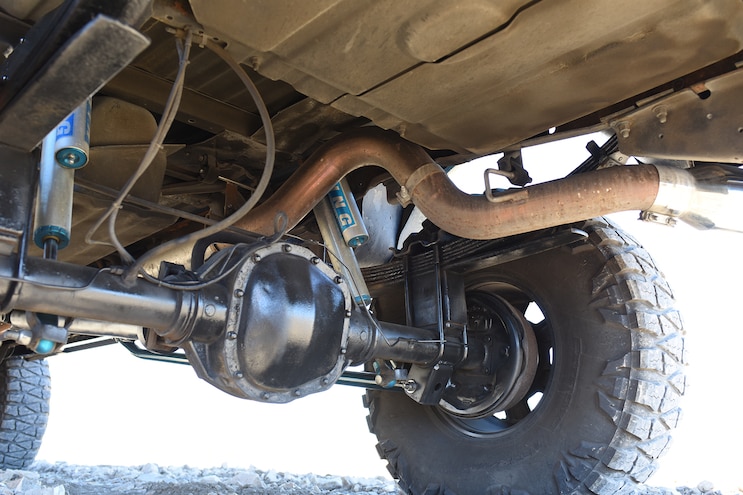 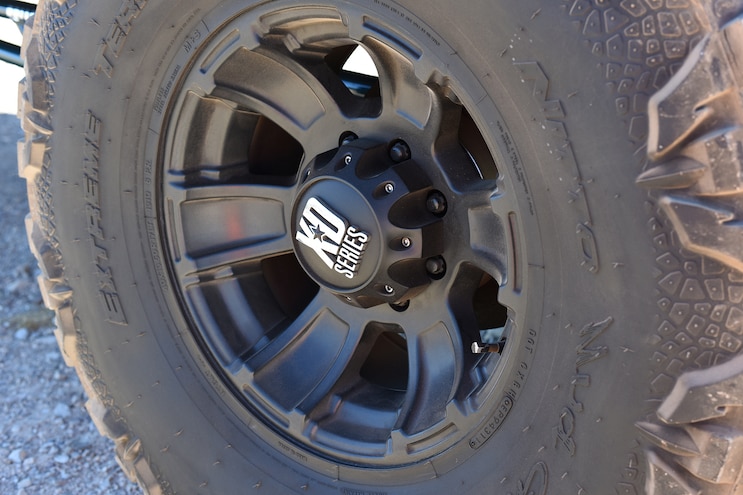 View Photo Gallery | 58 Photos
Photo 14/58   |   044 1997 Ford F 350
By sticking with the dark theme and keeping the chrome to a minimum, the F-350 has a clean and cool vibe. The truck is impressive, because it isn’t totally over the top. These XD Revolvers are tough wheels that fit this truck like a glove. 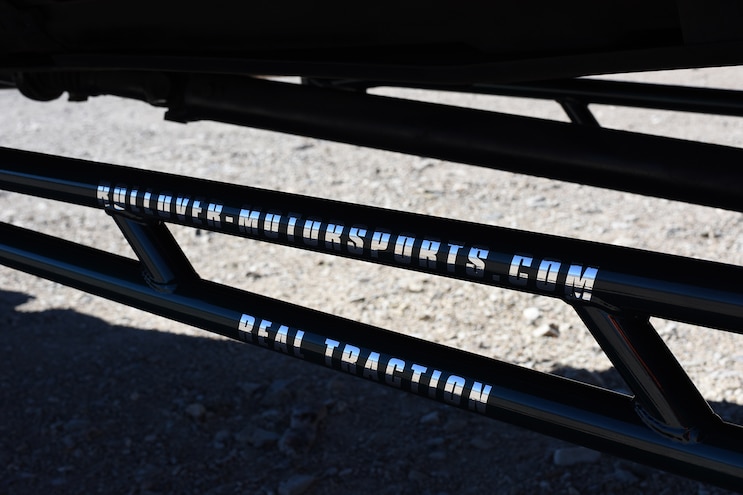 View Photo Gallery | 58 Photos
Photo 15/58   |   045 1997 Ford F 350
Although Alec doesn’t plan on sled pulling with his truck, he loves drag racing it at Rocky Mountain Raceway in Utah. In order to improve his traction on the strip, he added ladder bars from Rollover Motorsports. As the rear axle tries to rotate backward, the bars apply that force to the frame, which then helps plant those big rear tires. 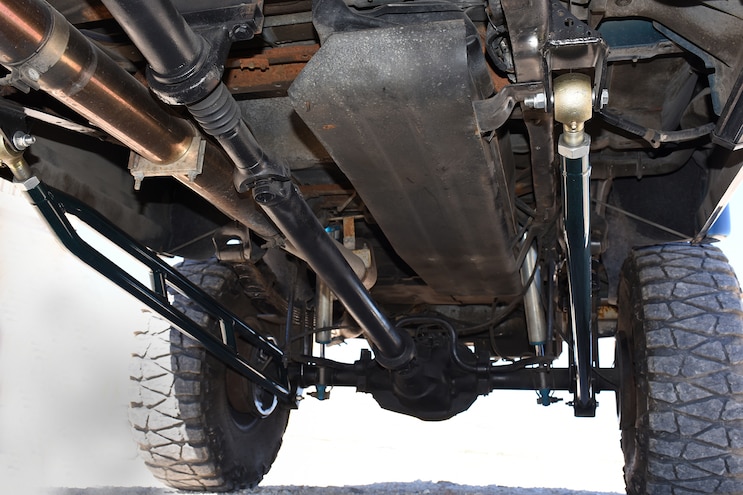 View Photo Gallery | 58 Photos
Photo 16/58   |   050 1997 Ford F 350
This is the belly of a ’97 F-350 that has lived in Utah for its entire life. Snowbelt dwellers cry when they see how clean and nice everything is. Do you think a truck of this vintage from the Midwest looks as factory fresh underneath? 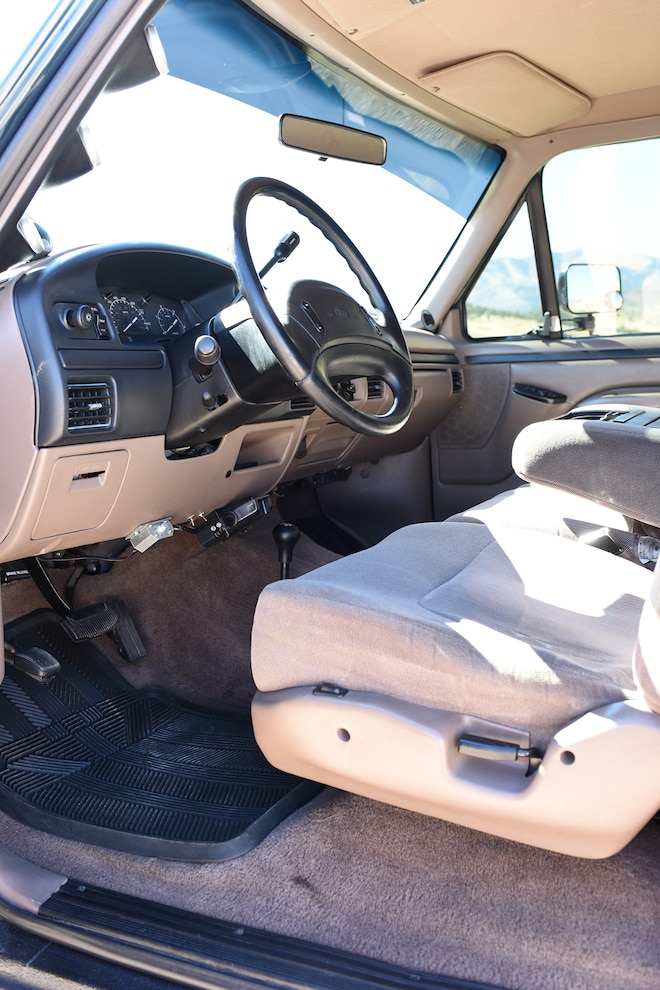 View Photo Gallery | 58 Photos
Photo 17/58   |   053 1997 Ford F 350
The interior is nice enough to lead people to believe that no one has ever actually taken a seat inside the truck. Alec has left it almost completely stock, with the exception of an Auto Meter gauge pod on the A-pillar. 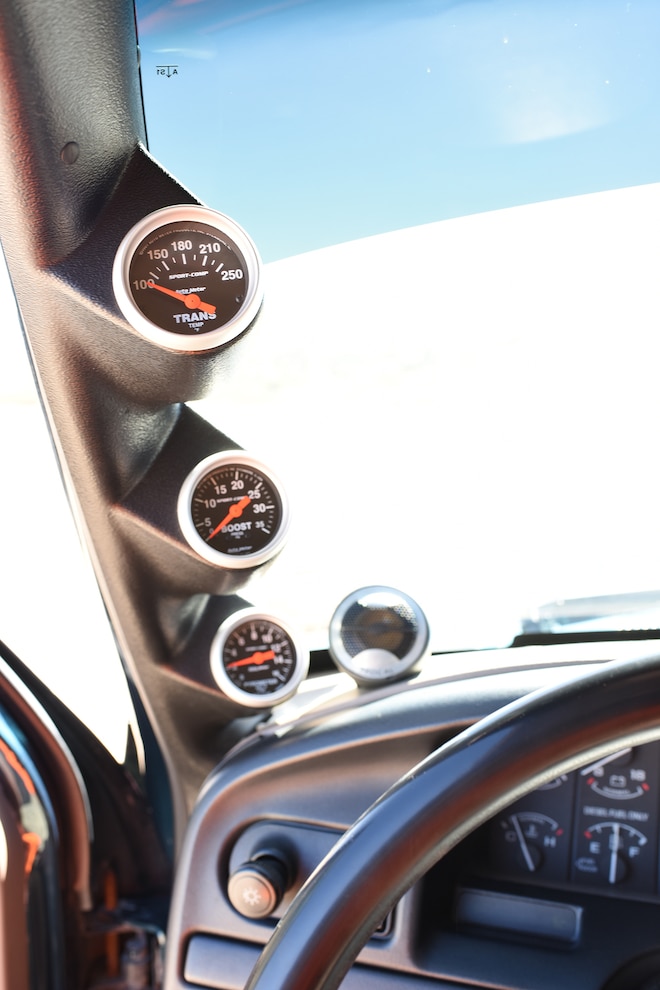 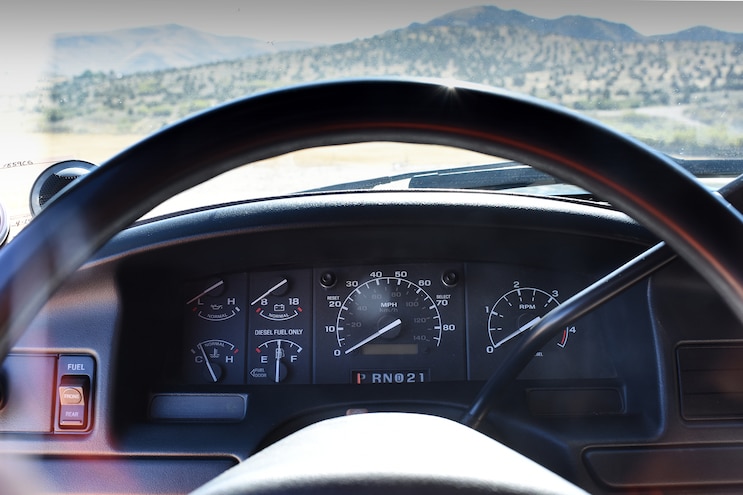 View Photo Gallery | 58 Photos
Photo 19/58   |   058 1997 Ford F 350
While the factory dash was not designed with a lot of flair and pizzazz, functionality is definitely at the forefront of Alec’s rig. Between the factory gauges and those that were added, Alec’s got all the info he needs. Note the switch to toggle between the dual fuel tanks. 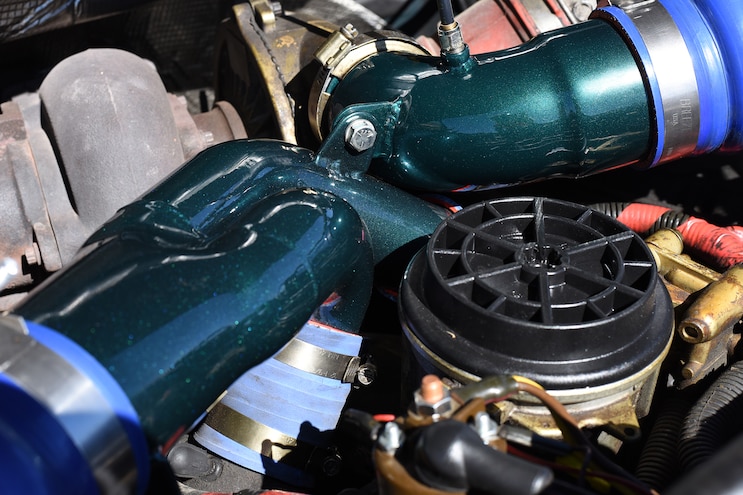 View Photo Gallery | 58 Photos
Photo 20/58   |   004 1997 Ford F 350
The engine compartments in OBS trucks are pretty cluttered, but we like the effort shown here by Alec in using body-color paint on the turbo plumbing. Details like this really show pride in one’s rig. 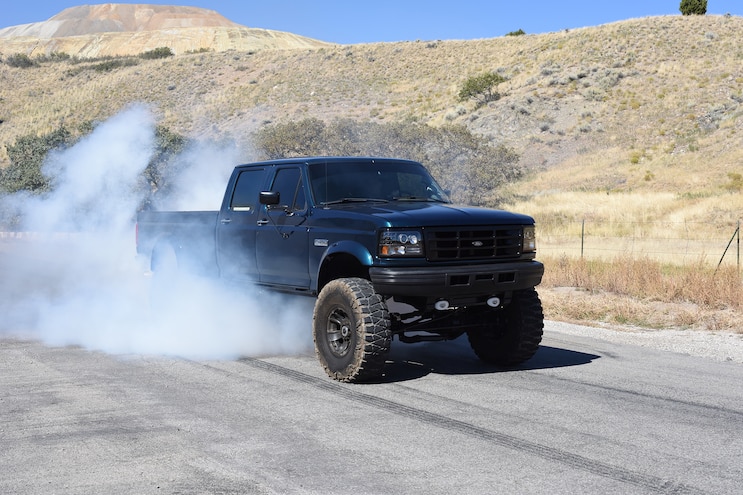 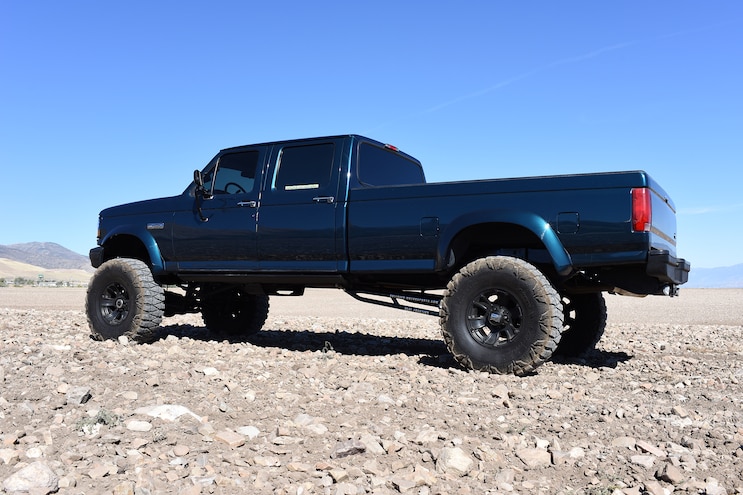 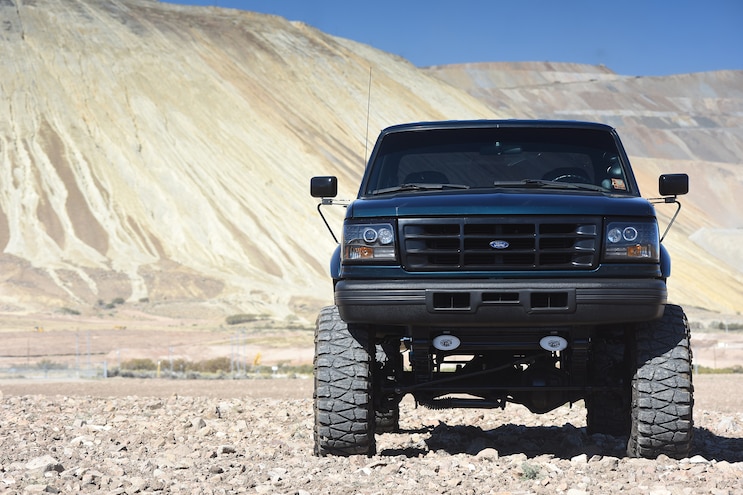 View Photo Gallery | 58 Photos
Photo 23/58   |   030 1997 Ford F 350
No, that’s not the lunar surface. It’s the local terrain where Alec lives in Utah. The truck is largely a pavement cruiser that hits the dragstrip and pulls a trailer when needed. But it has the parts, pieces, and attitude to handle any situation with which it’s confronted. Alec’s rig is the result of a smart, cool build that promises to get stronger as time goes on.