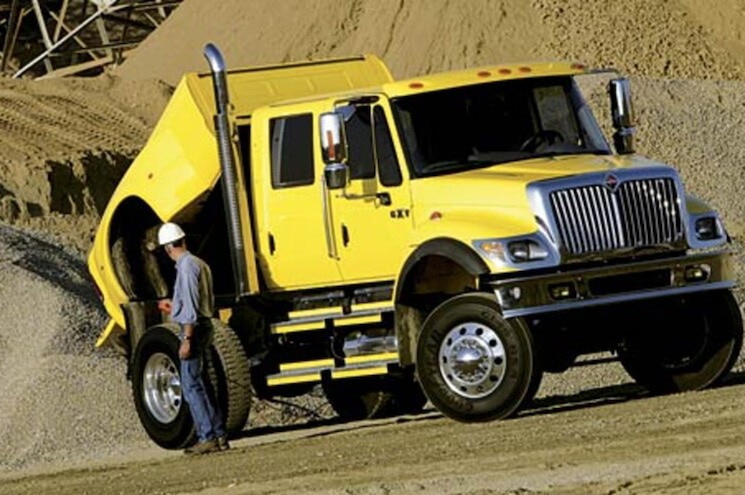 For the better part of two years, pickup trucks have been the "it" vehicles for people interested in buying a new or previously owned ride. With U.S. auto manufacturers scaling back (eliminating) sedans from their lineups, crew-cab shortbed rigs are fast becoming the standard for daily transportation, with some never doing any true truck-type work at all.
And, as cars—especially bigger models—are discontinued, pickups are taking on more size (and using more space), standing taller, in some instances wider, and definitely heavier than their predecessors of the same make, model, and trim.
That's how things are at the general consumer level, with rigs that are part of our everyday normalcy. And, looking toward the not-too-distant future, many of the EV pickup concepts appear to be even bigger! In the "abnormal" space, however, there are much bigger trucks that technically qualify as being pickups (with traditional-looking cabs and beds) but, for all intents and purposes, are custom-built, gargantuan rigs (some built on medium-duty chassis, with more powerful engines, etc.) that dwarf even the largest mass-produced, light-duty units on the road. This quick rundown highlights five of the biggest pickup trucks that we've come across over the years. How do you feel about these big rigs that pose as pickups?
Lamborghini LM002 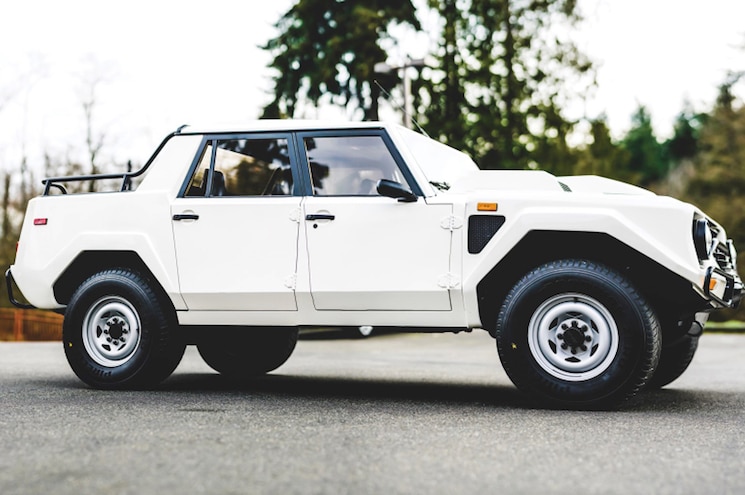 View Photo Gallery | 6 Photos
Photo 2/6   |   002 Lamborghini Lm002
Who knew Lambo made a truck? And it's a big truck at that! Yes, this off-road rig came about in the mid-1980s and had a production run that lasted until 1993. The LM002 featured a 5.2L V-12 engine (think Countach), but if that wasn't enough power for you, a 7.2L marine V-12 was also available as an optional motivator. In typical Lamborghini fashion, the "Rambo-Lambo" was decked out with full leather trim, tinted power windows, air conditioning, and a roof-console-mounted premium stereo system. At this point, the Lamborghini LM002 is a true holy grail in the truck world and will probably be valued very high if it's in good shape.
Hennessey VelociRaptor 6x6 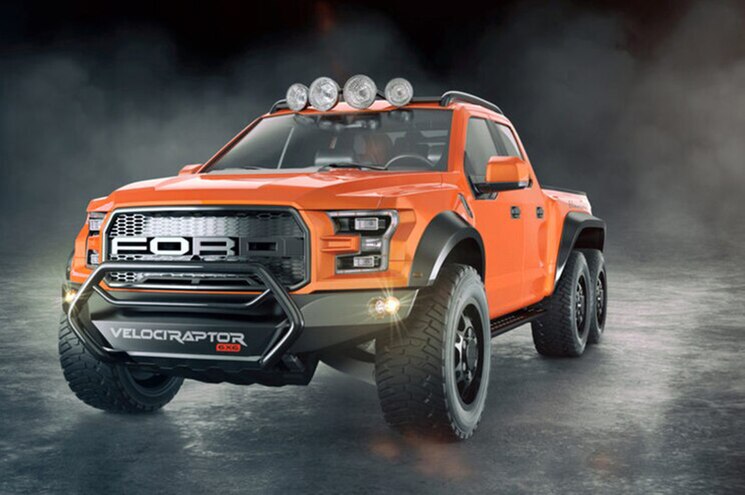 View Photo Gallery | 6 Photos
Photo 3/6   |   003 Hennessey Velociraptor 6x6
We got our first look at the six-wheeled, $349,000 VelociRaptor at the 2017 SEMA Show in Las Vegas and actually had a chance to drive the VelociRaptor 600, a lesser-cost, armored, four-wheel version. Don't get it wrong, these 600-hp, 602 lb-ft brutes are not Ford's Super Duty made to look like Raptors. They're true, SVT F-150s with a third leg added, along with suspension pieces, interior treatments, and other ancillary bits that put it solidly in the high price range for pickup trucks. Builder John Hennessey calls VelociRaptor 6x6 "pure aggression on wheels all six of them." We don't argue that.
Apocalypse HellFire 6x6 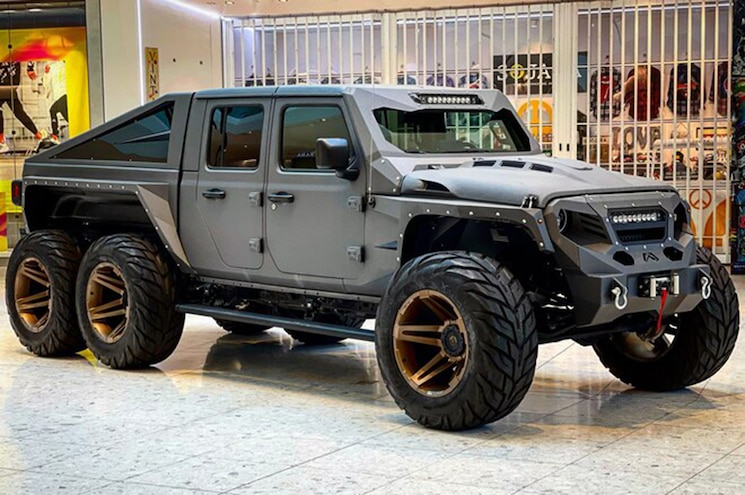 View Photo Gallery | 6 Photos
Photo 4/6   |   004 Apocalypse Hellfire 6x6
It wasn't too long ago that we got our first look at this tri-axle 2021 Jeep Gladiator that's been modified to the hilt. Apocalypse HellFire conversions are driven by naturally aspirated versions of Chevy's vaunted LS3 engine, making 500 hp. However, supercharged Dodge Hellcat power is optional, an upgrade that brings 707 hp to a rig that sports a full 8-foot bed that's ready to haul cargo quickly.
Hummer H1 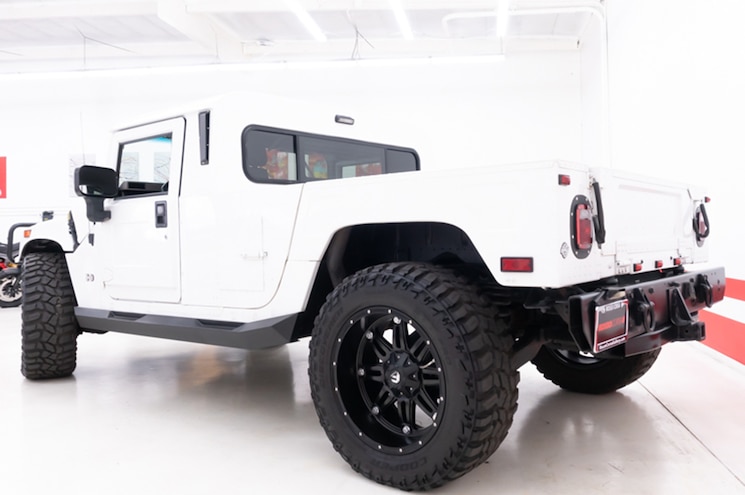 View Photo Gallery | 6 Photos
Photo 5/6   |   005 Hummer H1
It's a shame this big-rig's production ended in 2006. Although the majority of H1s are four-door, SUV-style rigs, a little-known fact about H1 is that some (non-military) two-door, longbed pickups were built, too, and a few of them are powered by 6.6L Duramax turbodiesel engines.
International CXT 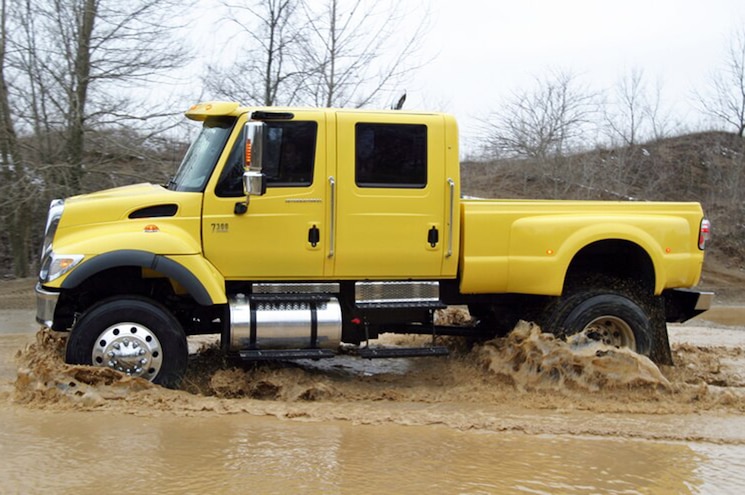 View Photo Gallery | 6 Photos
Photo 6/6   |   006 International Cxt
On the extreme side of biggest pickup trucks is this rig, a mammoth that we actually got to drive back in 2005. It's 22 feet long, weighs 14,000 pounds, and engineers at International had the nerve to configure it for an optional 8-foot "tilt" pickup bed. CXT actually stands for "Commercial eXtreme Truck," which we're told came to fruition thanks to Work Truck Review readers' response to a September/October 2003 report on "Big Red," a behemoth pickup truck that was spied during a visit to International's proving grounds. Hands down the largest of the top 5 biggest pickup trucks in our group, here are additional stats about the CXT: