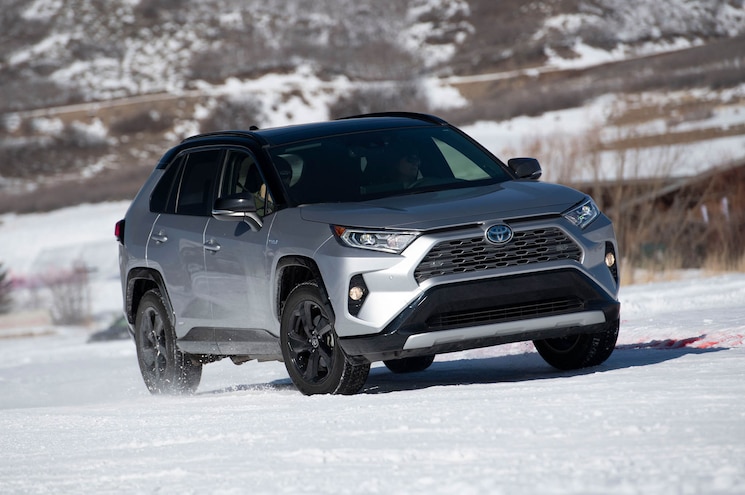 The 2020 Toyota RAV4 TRD Off-Road and RAV4 Hybrid represent the two most disparate branches of the small SUV's family tree. The RAV4 TRD Off-Road comes with a specially tuned suspension, 18-inch flow-formed alloy wheels, and Falken all-terrain tires to give it an edge off-road. Meanwhile, the hybridized RAV4 boasts a 118hp electric motor that helps bring total power output to 219 and enables an easy 40 mpg in EPA testing. Unlike other RAV4 models, the TRD Off-Road and Hybrid both come standard with all-wheel drive, but the means of which is yet another difference between the mean one and the green one. 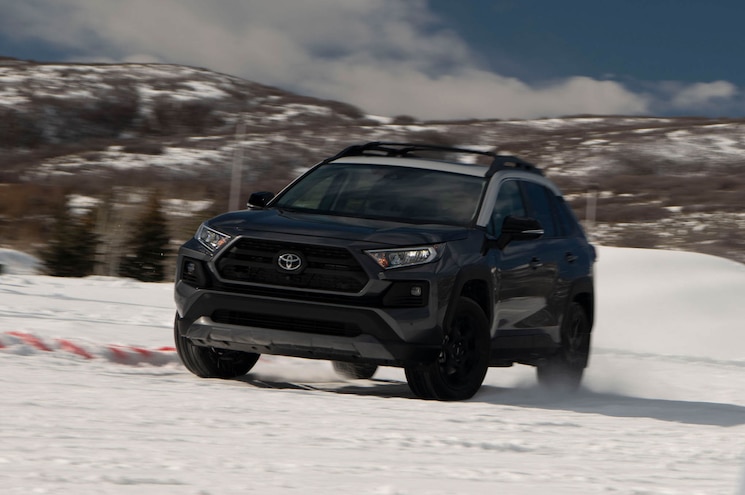 The TRD uses Toyota's most sophisticated all-wheel-drive system called Dynamic Torque Vectoring AWD with Driveline Disconnect. Dog clutches at both ends of the driveshaft couple the rear axle to the engine, offering a more efficient front-drive mode when rear traction isn't needed. A set of clutch packs in the rear differential provides true torque vectoring, varying the amount of twist sent to the right and left rear wheels to optimize stability. Of note, this system is also available in the RAV4 Adventure and Limited.

The RAV4 Hybrid's Electronic On-Demand AWD system is a wholly different beast, with no transfer case or driveshaft between the engine and rear wheels at all. Instead, the battery shuffles power to a motor-generator mounted on the rear axle whenever the SUV detects a loss of traction on the front axle. Like other all-wheel-drive RAV4s, the Hybrid defaults to front-wheel drive in normal driving conditions.

A third system is available on non-hybrid RAV4 LE, XLE, and XLE Premium models. More basic than the Dynamic Torque Vectoring system, Dynamic Torque Control AWD does away with the dog clutches on the driveshaft and the clutch packs in the differential in favor of a simpler rear axle coupler and brake-based traction management on the rear wheels. 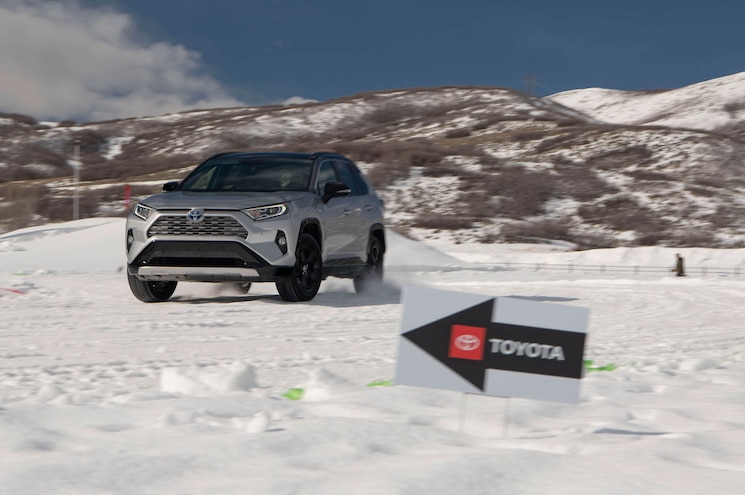 Taking to the Track

In order to fully flesh out the company's all-wheel-drive offerings, Toyota invited us to the mountains above Salt Lake City, Utah, to put vehicles like the RAV4 TRD Off-Road and RAV4 Hybrid through their paces. On an early, crisp winter morning, we headed to the Soldier Hollow Nordic Center to find our way around a snowy, icy autocross course that would allow us to push the tractive limits of our two RAV4s in question (as well as all-wheel-drive examples of the Highlander, Camry, Avalon, and Prius).

With the RAV4 TRD Off-Road set in Snow mode via its Multi-terrain Select controller, there was plenty of stability control intervention, but the SUV let its traction nannies off the chain a little bit. This allowed us to apply the throttle more aggressively to keep wheel torque high and the tire treads paddling through the slushy stuff. However, a long press on the stability control button—seriously, like 20 seconds, maybe—completely deactivates Multi-terrain Select, traction control, and stability control, and it was in this mode that we were able to really have some fun. 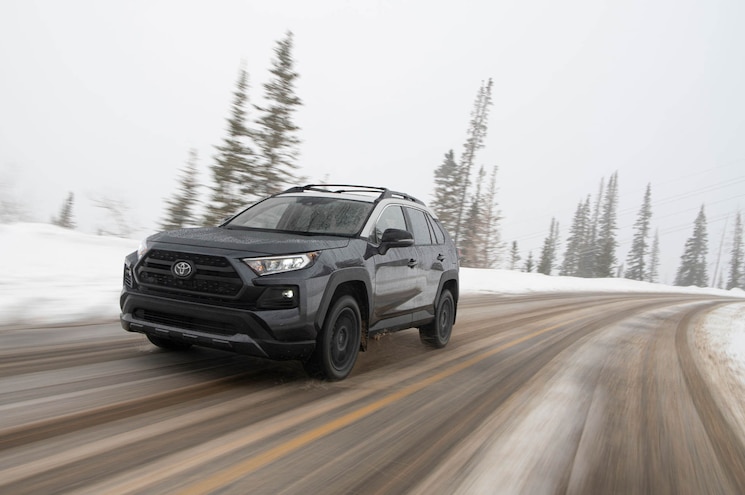 While totally removing the safety net is ill-advised on public roads scarfed with snow, on our closed course, it allowed us to gracefully arc the RAV from apex to apex, tail wagging the whole time. Helping the RAV4 TRD Off-Road in its quest for fun are those aforementioned all-terrain tires, which allowed us more control in such hoonery than the all-season tires found on some of the other Toyotas on hand. What's more, the "Dynamic Torque Vectoring" appellation isn't just marketing—we could actually feel the RAV4 overdriving its outside rear wheel in corners to compensate for our silly driving.

After picking up our dragging knuckles and abandoning our other Cro-Magnon tendencies, we stepped into the RAV4 Hybrid to take to the course once again. Dressed in XSE trim, our expectations were lower than they were in the rugged-looking TRD Off-Road. Nevertheless, the XSE Hybrid offered just as much stability and control with the electronics active as its rough-and-tumble sibling did.

Deactivating the traction aids completely yielded a less aggressive and slightly tamer driving experience than in the TRD Off-Road, but nevertheless, the RAV4 Hybrid was still surprisingly fun to drift between corners, offering more finesse than expected. It could also be surmised that the rear-mounted electric motor responds more quickly to front-axle slip than a conventional transfer case might. That said, there's no denying that this system is tuned for boring ol' efficiency, not a sporty driving experience. 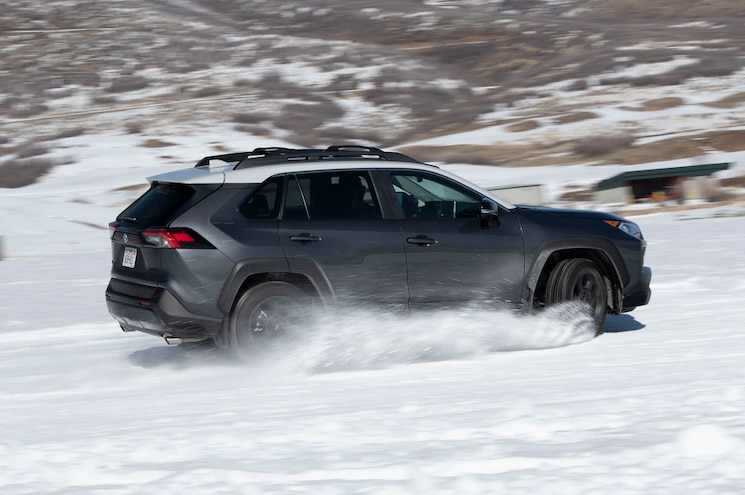 The Rest of the Story

The Toyota RAV4 is one of the industry's bestselling vehicles for a good reason. It offers lots of efficiency and space for a relatively reasonable price, and a migration to the TNGA modular platform as part of its 2019 redesign yields a much better driving experience than before.

While we might throw some shade at what some perceive as dilution of Toyota's performance brand, the RAV4 TRD Off-Road nevertheless offers a surprising amount of mechanical sophistication for a small SUV—true torque vectoring is a rare find on even some luxury marques. Its traction and control are every bit the equal of competitors like the Subaru Forester and XV Crosstrek and Jeep Compass Trailhawk. At the other end of the spectrum, the RAV4 Hybrid is responsive when the going gets slick, and it took a lot of ham-fisting to upset the handling on our icy, slushy snowcross.

Put another way, both the RAV4 TRD Off-Road and its Hybrid sibling can probably get you where you need to go when the flakes fly as long as you're judicious.