Not your average band's van 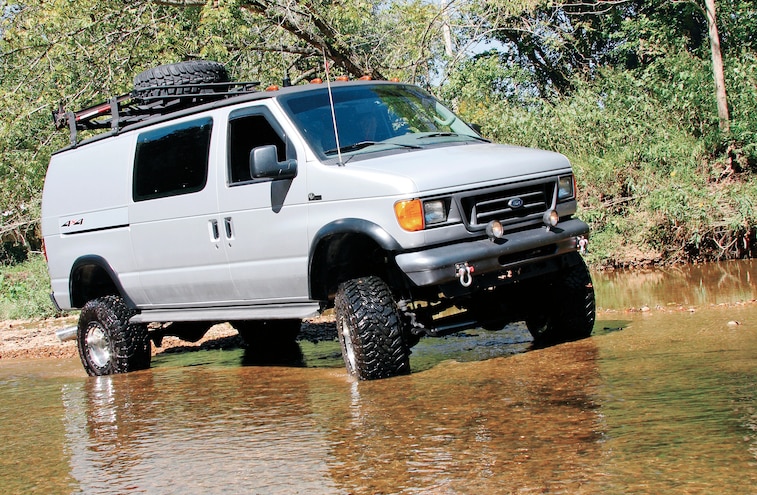 The off-road hobby is known for attracting all walks of life. No matter what age or income bracket you fall in, there is a place for you in the wheeling community. One thing that has always gone hand in hand with wheeling, and the automotive hobby in general, is music. While the relationship between musicians and cars is nothing new, you might be surprised to find how many professional musicians are actual off-road enthusiasts.
We’re not talking about chrome-clad 4x4s that are only driven to the local mall to sign autographs, but real-world wheelers that serve as daily drivers and weekend toys. So, when we caught wind that one of our favorite musicians was daily driving a 4x4 on 35s, we were interested. When we found out it was a 2004 Ford E-350 van and he actually takes it off-road, we decided to head to Nashville, to have a closer look. 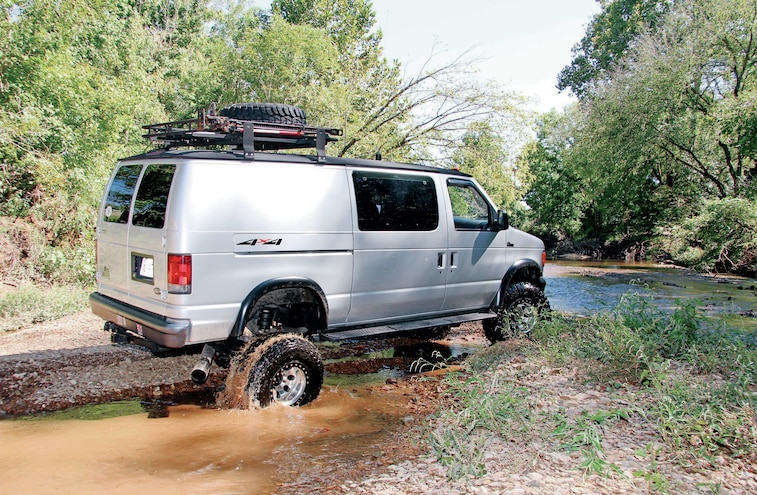 View Photo Gallery | 9 Photos
Photo 2/9   |   Essentially Off Road in Murfreesboro, Tennessee, also helped modify the van to fit Hank’s needs. We sort of laughed when we first saw the roof rack towering on top, but then we met the 6-foot 4-inch tall man who drives it, and it seemed more plausible that he could actually use it!
The artist we are referring is none other than Hank Williams III. If that name rings a bell, you’re on the right track. Known mostly as Hank3, the talented musician hails from a long line of country music elite. His grandfather, Hank Williams Sr., is widely considered one of the most significant country musicians of all time. Hank3’s father, Hank Williams Jr., is also a living legend in the country music realm. Unlike his family, Hank3’s music career ranges beyond the cloak of country.
With a unique mix of classic country, rock, and punk, Hank3 doesn’t necessarily fit in one genre or the other. If you are a fan of music, no matter what kind, Hank3 is worth giving a listen. For an even better experience, head out to one of his three-hour-plus shows! OK, enough about the man, now let’s look at his Ford E-350 van.
Brother of the 4x4
This Ford E-350 van isn’t just a novelty item built to stand out, but rather a tool used to carry Hank3, his band, and all their gear on select tours. Sure, Hank’s got a big tour bus, but he still likes the intimate feel of a barroom audience and the raw experience of driving his 4x4 van from show to show. We were fortunate to sit down with Hank3 for a Q&A and find out what got him interested in off-roading and how the van came to be.
FW: It’s easy to see that you’re a 4x4 enthusiast. Can you tell us about what got you into wheeling and what was your first 4x4?
Hank3: The first one I ever got to lift was a Ford F-150. It just had a four-inch suspension lift kit on it with 33s. 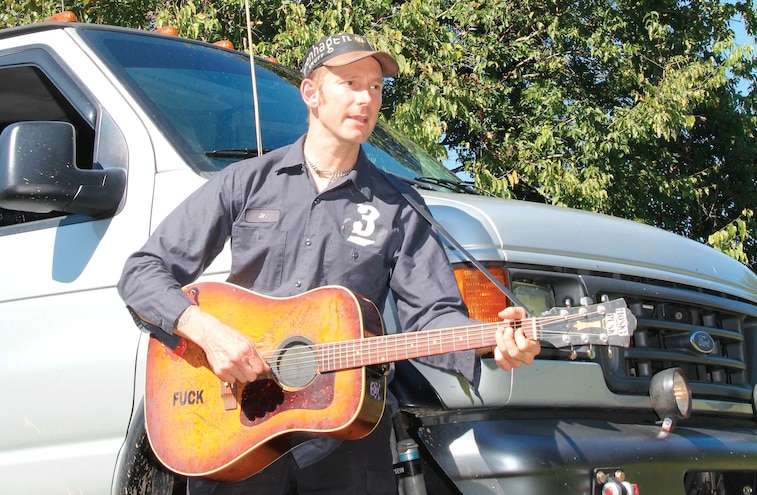 View Photo Gallery | 9 Photos
Photo 6/9   |   2004 Ford E 350 Hank Williams III
FW: Nice!
Hank3: The first night I get it, there is a trail that I see off of the side of the road and me and my friend go up it. It’s about six at night. It was in December, and sure enough, we go down the mountain and get stuck in a massive bog. I see a light at the top of the hill and I start walking towards the house. I knock on the door and ask “Sir, can I use your phone. We got stuck up here.” To which he said, “Ah, don’t worry about it. I’ve already called the police for you.”
FW: Ouch.
Hank3: That night, a tornado hit Franklin County, Tennessee. So, I’m figuring that my truck is going to be slammed with trees. By chance, on the way to go get my truck, we look over and there are three to four Jeeps at the gas station that have 40-inch tires, 8-inch lifts, and massive Warn winches. Me and my stepdad pulled up to them and offered them basically $75 to $100 a piece to try and get my truck out. It took probably eight to ten hours. Every time they would pull it five feet, they would get stuck, and have to winch themselves out. I definitely got it stuck real good! And thank God, I found some brothers of the 4x4 out there to help me get it out.
FW: That’s cool. It sounds like overall it was a positive experience.
Hank3: Yeah, I didn’t get a ticket from the police officer or nothing. It was kind of a public access road. Nowadays, there is a gate on it. It was just good clean fun, man.
FW: How did you make the transition from a lifted truck to a lifted van?
Hank3: Well, over the years, I have always had trucks. With the weather and as much gear as I haul, even just when I needed to get stuff fixed, I thought it would be nice to have a little bit of cover. But I didn’t necessarily want a little cab on the back of my truck. So I had seen a couple of the lifted Quigley vans and the really decked-out ones in California. I did a little more research on it, and kind of fell in love with it. I’ll probably always have one as long as I live just because of the camaraderie that comes along with it. I’ve driven a lot of jacked-up trucks, but I’ve never had one that has started so many conversations and has introduced me to so many different people. It’s a good feeling. 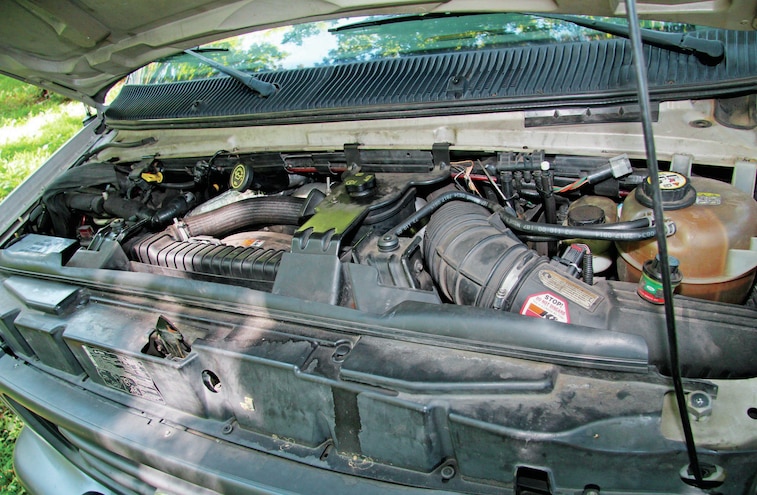 View Photo Gallery | 9 Photos
Photo 7/9   |   Believe it or not, there is a 6.0L turbodiesel hiding under that relatively small hood. To make it more reliable, the factory head bolts were swapped for studs and a high-flow EGR cooler installed. To turn up the power, a Diablo Sport programmer was added.
FW: Your latest album is titled Brothers of the 4x4 and the van even made the cover. Music and vehicles have always gone together, but it seems like you have taken it a step farther. How much has trucks and off-roading influenced your music?
Hank3: It’s a natural thing. Where I come from, there are farm trucks and lifted trucks. Most of ‘em belong to kids in high school. Instead of getting a hot rod or Camaro or Mustang, they work hard throughout the summer so they can get a lift and bigger tires. They can go to a friend’s farm and have some fun without getting in trouble. You can’t cruise the square anymore, so a lot of the kids head to a farm and play in the mud hole. Still to this day, when I drive through Hendersonville or Franklin, Tennessee, I see some of the biggest lifted trucks. That was just my environment growing up. When I was growing up in Missouri, I would look at all the four-wheel-drive magazines and daydream about it. I used to go see Bigfoot, work on a farm, and sling mud when I could. It just comes with the territory.
FW: That’s cool. So what’s next for Hank3?
Hank3: Over next two years, I am going to be touring on the new records pretty consistently, trying to play where we haven’t played. In the meantime, I’ll always be doing what I do, creating music. It might be a country record, or a rock record, or a who-knows-what kind of record, but I will be doing something.
FW: We really appreciate you taking the time. Anything else you’d like the reader to know?
Hank3: If you’re coming to see my show, show up on time. I don’t usually have an opening band. For people looking for merchandise and music, they can get it through www.hank3.com.

- OF
By Ali Mansour
4 Articles