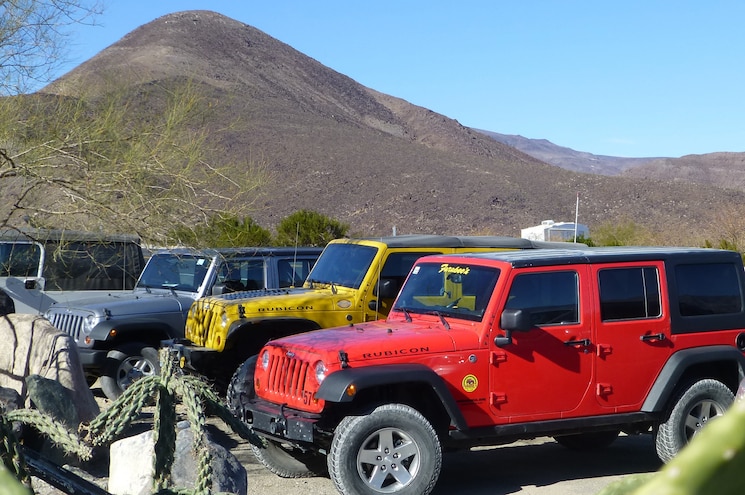 Morning light illuminated the strange moonscapes of Death Valley as our snaking line of Jeep vehicles crested the Pantamint Range. Below, in a palette of pastels, was a swath of the nation's largest park outside of Alaska. The series of tight and twisty turns designed to slow our steep descent made it easy going, especially when I geared down my Jeep Wrangler, but a series of questions quickly popped into my mind. In what fashion did early travelers to this land slow their Conestoga wagons and mule teams? How did they manage to be self-sufficient in this severe terrain and harsh climate that drew the moniker that was, unfortunately, aptly named for many explorers—Death Valley? And what would the early prospectors who carved tracks with their wooden wagon wheels and dug deep into the earth with their shovels have thought of our multi-horse-powered-rigs, with all the amenities one could ask for in a modern-day Jeep? For us, Death Valley is a place for a different type of exploration and mining—with hundreds of miles of dirt roads and backcountry trails, it's a place for motoring in 4x4 vehicles and mining for beauty.
Death Valley received its English name during the California Gold Rush in 1849, as prospectors and others crossed this immense valley making their way to the gold fields; although only one death was recorded in the region during the Rush. In the 1850s, miners found gold and silver, and in the 1880s, borax was discovered and hauled out by mule-drawn wagons. Today, Death Valley is a unit of the Mojave and Colorado Deserts Biosphere Reserve that boasts over 900 types of plants with over 94 percent of its acreage designated as a wilderness area. Although lower, hotter and drier than any other region in the U.S., temperatures are usually pleasant and welcoming, with the exception of summer when they often exceed 120 degrees (the hottest temperature recorded was 134.6 degrees). Despite the heat and aridity (annual precipitation is a little over 2 inches), there are many species of vegetation, birds, and mammals that live in the valley throughout the year, and it has become a popular tourist destination. 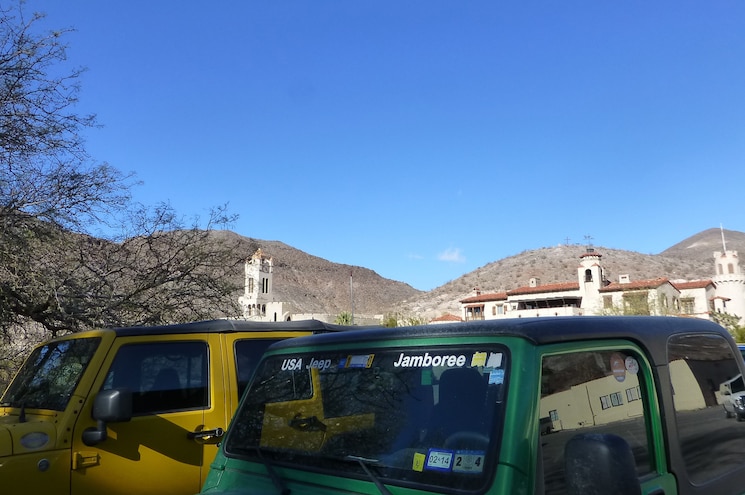 View Photo Gallery | 29 Photos
Photo 2/29   |   2014 Death Valley Jeep Jamboree Windows
The Death Valley Exploration is held in December, when this barren and beautiful region enjoys a more amiable climate. The three-day trip was planned to explore the back roads and old mining towns of Death Valley, with Mark Smith and his longtime family friend, Perry King. King, who is well known as a movie, television and Broadway actor, has spent years studying the hidden riches of Death Valley. An avid fan of four wheeling, King's familiarity with the region led him to design an itinerary that began on night one at the Lone Pine Film History Museum, with a tour and a trip out to nearby filming locations. Days two and three set a course through the tiny ghost towns of Darwin and Rhyolite (known for its Bottle House and used by film production companies for its distinctive scenery), the small, rustic, western-styled resort of Panamint Springs, the colorful rock formations of Artist's Palette in Titus Canyon, Ubehebe Crater, and a history tour of Scotty's Castle, a Mission and Spanish Colonial revival-styled villa that illuminates life in the life and times of the Roaring 20's. Overnight accommodations at Stove Pipe Wells and Furnace Creek Ranch enriched the valley's history even further.
"Death Valley was a perfect location for a Special Event Jeep Jamboree," said Glenda Gau, trip organizer and adventure consultant for Jeep Jamboree USA. "I was really struck by the power of the landscape, and like a vast ocean, it can change in a moment. It was not a typical off-road trip, because a lot of trails were closed in Death Valley because of flooding last summer, but seeing the grandeur, and experiencing the camaraderie and fun was like all our Jamborees. Plus, it was a great leisurely trip listening to Perry King share his knowledge of the Valley and his experiences there over the past 25 years."
Following King's lead, we spent two days exploring snaking canyons and ascending to elevated vantages that take in the panorama of desert playa or saline lakes, the most level of all the earth's topographical surfaces. In one view we could see the valley, one of the lowest points on this hemisphere, and at the same time, some of the tallest mountains in the lower 48 states, including the snow-capped 11,049-foot Telescope Peak of the Pantamint Range. Among the trip's highlights was Badwater, located 282 feet below sea level—part of the 550 miles of the valley's floor lies below sea level. Here, light reflects in the saline pools, which support a subtle ecosystem including brine shrimp and the Badwater Snail, whose shell is measured in millimeters. 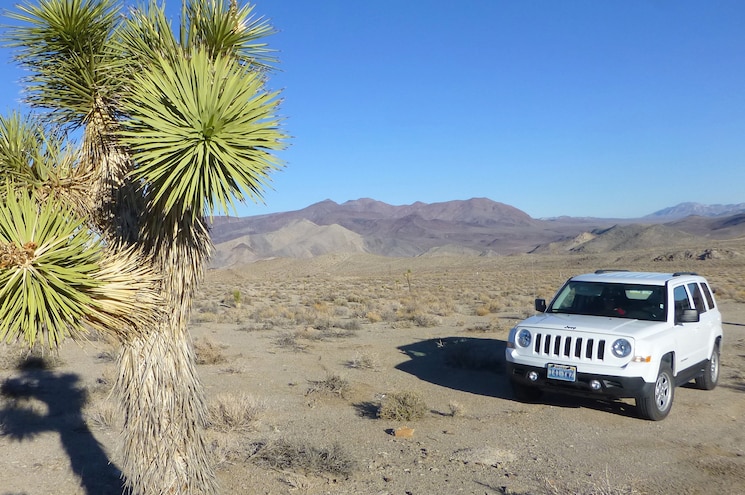 View Photo Gallery | 29 Photos
Photo 9/29   |   2014 Death Valley Jeep Jamboree Jeep Patriot
"I have been an off-road enthusiast all of my life," said King. "In the late eighties, I was working on Broadway and I was dying to get out of the city, when I saw a story on the Goler Wash, in Death Valley. I was fascinated and dreamed about driving it. I did, and I was hooked. I love its wildness, macabre, the danger and the stories. You can see the geology of the planet from millions of years ago-events from millions of years ago written in the rock-the colors. That's why the miners loved it."
For King, the book "Death Valley in '49," written in 1900 by the man who saved the 49-ers, tells a tale that illuminates the legend and lore of Death Valley. "He was a real hero; he walked three times from Death Valley to Los Angeles (then just a small rancho) to save the 49-ers! He describes the place in detail. But of course, there were then no place names. It's so much fun to read it and figure where he's talking about. The travails were incredible—almost each day they would come right up to the edge of death by thirst- and then find some tiny pool of water or something."
For Roy Elfers and his wife, Patti(PJ) McCabe, of Wading River, Long Island, the trip was their 5th Jeep Jamboree, although the couple have been on countless wheeling events hosted by various off road clubs on the East Coast. The couple say they have owned so may Jeep vehicles over the years that it's "almost too many to recall, but a quick estimate includes at least three CJ-7s, five YJs … and currently an '06 LJ Rubicon.
"Upon reflection of the Death Valley Jeep Jamboree, being able to not just meet and shake hands with Mark Smith, and Perry King was incredible, but also to sit, have conversations, dine, travel, and explore with all was beyond anything I had anticipated. The dynamics of the group was phenomenal. Perry is an amazing storyteller who is just another gearhead like most of us, and Mark Smith's quick sense of humor was great! I can honestly say it was an adventure that Patti and I will never forget!"
To learn more about Jeep Jamboree, visit http://jeepjamboreeusa.com/. 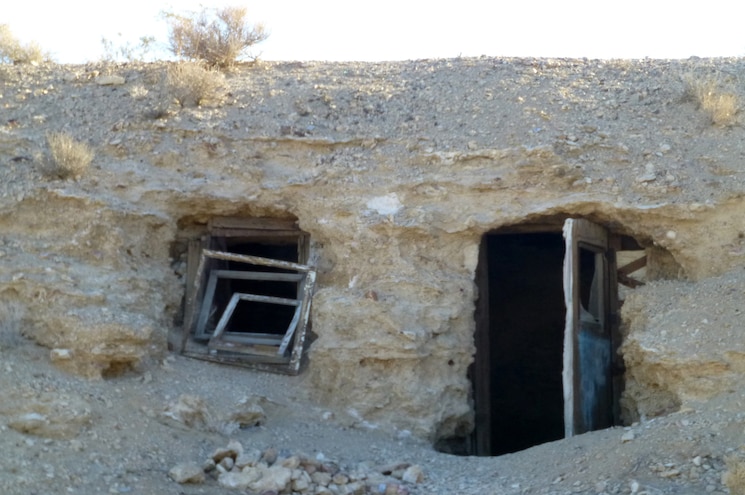 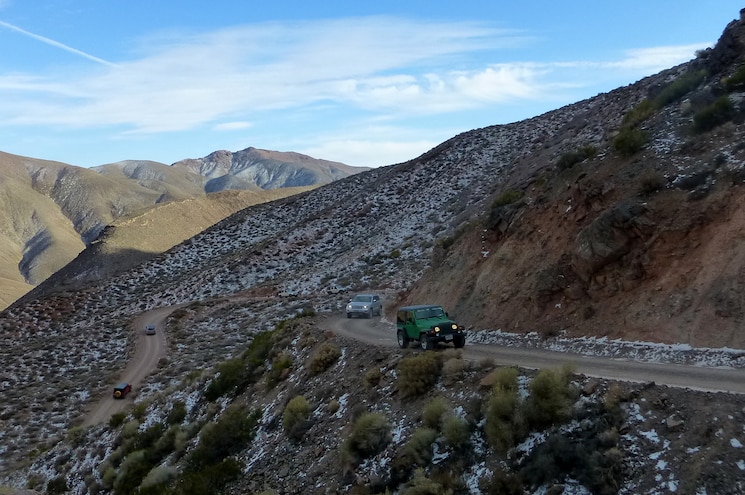