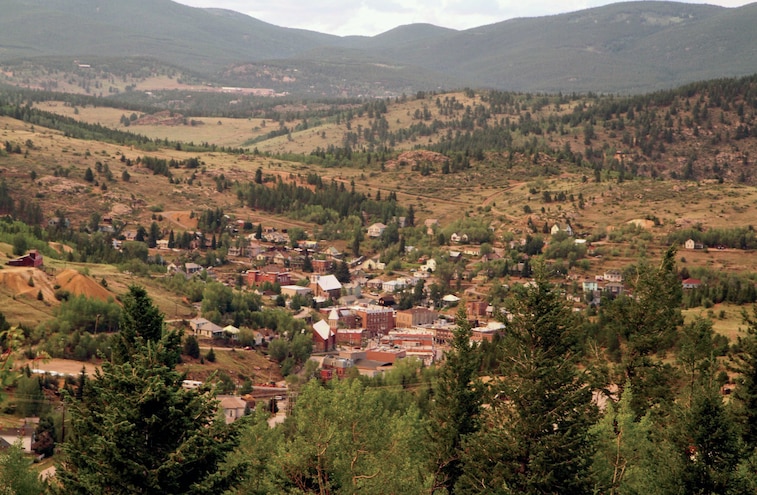 Travelers heading west from Denver are treated to one of the country’s most scenic drives. Interstate 70 leaves the lower elevations of the Mile High City and winds through valleys and steep grades aiming for the 11,880-foot-tall Loveland Pass. Shortly after leaving Denver, the road climbs briefly and drops into the beautiful valley that holds Idaho Springs, a former mining town turned popular tourist stop. The city is also the gateway to Mount Evans and the Mount Evans Scenic Highway, which begins its climb to the 14,265-foot summit there.
The Central City Parkway begins in Idaho Springs, too, and takes you over a steep mountain grade to the Central City and Blackhawk mining districts—now frequented by casino players rather than prospectors and pack mules. Farther west, the historic town of Georgetown marks the beginning of the climb to the Eisenhower Tunnel. The tunnel bores through the highest peaks of the Rockies at around 11,000 feet, bypassing the long winding trip over Loveland Pass in the process. This entire area is laced with scenic beauty and historical diversions. 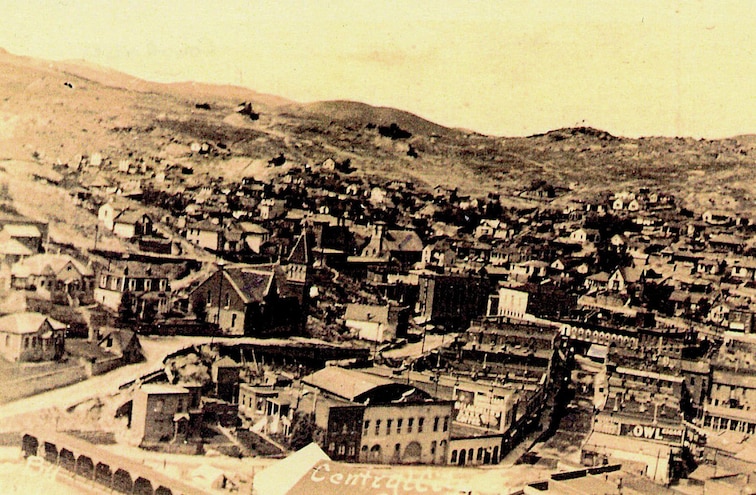 View Photo Gallery | 19 Photos
Photo 2/19   |   In the 1800s, Central City was a booming mining town, complete with saloons, opera houses, and mining- related businesses.
Central City
Central City was originally founded in 1859 during the Pike’s Peak Gold Rush and became known as “The Richest Square Mile on Earth.” As many as 10,000 prospectors once worked the area, but this boom was short lived and the miners eventually moved to other more prosperous-seeming locations. By the 1950s, only a few hundred remained.
When casino gambling was introduced in the 1990s, the town experienced a slight resurgence. The 2000 census showed Central City’s population at 515.
To provide a direct route to town, the Central City Parkway was completed in 2004. This road climbs the steep grades from Idaho Springs to Central City, but is wide, modern, and therefore, suitable for large RVs. An ideal base camp for any RV traveler is the Central City KOA, which is one of the better KOAs in the country. It is situated up a winding drive and overlooks Central City from its lofty perch, providing amazing sunset views over the Front Range. 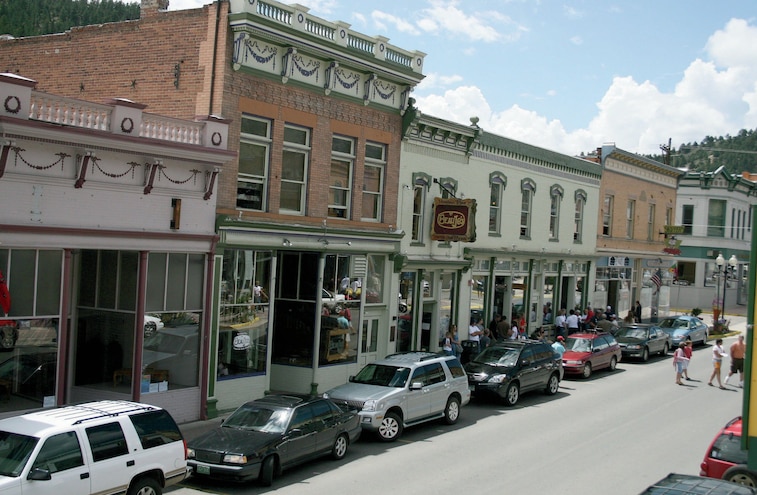 View Photo Gallery | 19 Photos
Photo 6/19   |   Downtown Idaho Springs is a throwback to the mining past. Many of the original buildings that once served the mining industry are now restored and used as restaurants and shopping.
Idaho Springs
Idaho Springs is right alongside Interstate 70. Anyone traveling west from Denver can easily see the town from the raised interstate, which squeezes along the southern edge of town. According to local legend, the town’s name derived from annual visits made to the hot springs by a Native American chief who journeyed from Idaho to bathe in the magic healing waters of the natural hot springs. Idaho Springs was founded in 1859 during the Pike’s Peak Gold Rush in a roundabout way. On January 5, 1859, prospector George Jackson discovered gold where Chicago Creek empties into Clear Creek, drawn to the area by the hot springs’ steamy clouds. Jackson kept the gold he discovered a secret. However, the secret was out once he paid for his supplies with gold dust, and other prospectors rushed in to establish their placer claims. Eventually, gold veins were found in the canyon walls on both sides of Clear Creek, and the miners switched to hard-rock mining. Idaho Springs became the center of the region’s mining activities.
Today, tourism has replaced mining as the driving economic force and downtown Idaho Springs is a National Historical District. A walking tour of the area lets you explore a multitude of historical buildings. The local museum boasts many exhibits on the area’s early mining history, along with outdoor exhibits, such as the Charlie Taylor Water Wheel built in 1893 to power a stamp mill. Many of the downtown buildings that once served a bustling mining community now house shops and eating establishments. Undoubtedly, the most popular place to dine is Beau Jo’s Pizza, located in an old general store and mining-supply warehouse on downtown Miner’s Street. The eatery’s legendary Mountain Pies are a favorite with everyone and draw folks from all over. Arrive early, especially on weekends.
Guided tours of the local mines like the Argo Gold Mine and Mill are popular. Want to try your hand at mining or panning? The Phoenix Mine offers gold panning in addition to tours. The stream runs right alongside the road, picking up gold in the mountains above and carrying it downstream. The best part, you can keep any gold you find.
Just 8 miles to the west of Idaho Springs next to Clear Creek lay Georgetown, a former silver-mining camp. Silver was found in 1854 in nearby Argentine Pass, and the town became a commerce center for the thousands of mines in the surrounding area. Georgetown was even considered a possible site for the state capital until the silver boom collapsed in 1893. In the 1950s, the city transformed into a stopover for skiers travelling between Denver and the ski resorts at Loveland Pass. The Victorian architecture of the historic downtown was the setting for the 1986 movie The Christmas Gift, starring John Denver. Today, Georgetown is a popular tourist stop. In town, you can catch a ride on the Georgetown Loop Railroad, a 19th-century steam-engine train, and view of the fantastic scenery and old mines between Georgetown and Silver Plume along the route. 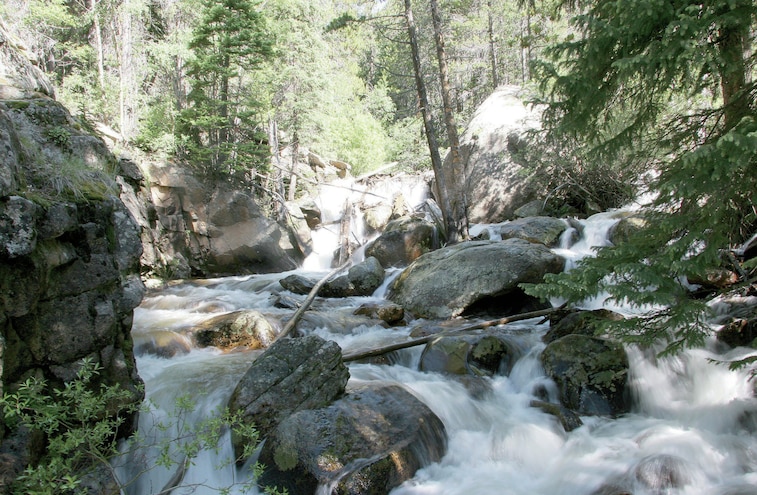 View Photo Gallery | 19 Photos
Photo 13/19   |   Numerous streams cascade down the mountain slopes.
Mount Evans
This 28-mile drive to the summit on the Mount Evans Scenic Highway offers amazing views. Watch as the terrain changes from montane forests to alpine tundra on its winding path to the top, gaining over 7,000 feet. As you leave Idaho Springs, the road begins its gradual climb through lodgepole pine and blue spruce forests, and buildings and developments gradually disappear. Numerous mountain streams cascade down the slopes of the mountain, heading for the valley below, as you drive. Patches of quaking aspen appear in the subalpine forest near the Mount Goliath Natural Area, just below Echo Lake. At this nature center, you’ll begin to see ancient, sturdy bristlecone pines. These twisted conifers grow slowly during each short growing season, battered by the high winds and heavy snow cover. Some are more than 1,600 years old.
The Mount Evans Scenic Highway is the highest paved road in North America, rising to the summit of Mount Evans at 14,265 feet. That mountain is the closest “fourteener” to Denver and is actually 154 feet taller than Pike’s Peak. The road was originally built by the Denver Mountain Parks system to compete for the Pike’s Peak tourism dollars that had been travelling to Colorado Springs. The first stage was planned to link Echo Lake and Summit Lake to Bergen Park near Evergreen and Idaho Springs. The 13-mile stretch between Echo Lake and Idaho Springs was completed by 1921. However, the final 15 miles to the summit weren’t finished until 1930 due to the unusual problems that come with high-altitude construction, such as poorly performing steam shovels. The final 600 feet had to be completed by hand.
Echo Lake Lodge overlooks this beautiful lake, which is nestled 11,000 feet up in the mountains. Next to the lodge is a U.S. Forest Service campground and on the shore of Echo Lake is a picnic area. The road to the summit is gated and operated by the forest service. Due to the heavy snow loads and long winters common for this altitude, the road is closed during the winter. However, it is generally open between Memorial and Labor Day, although the actual dates are completely weather dependent. This steep road climbs switchbacks as it winds its way to the top. RV travel is okay up to Echo Lake. After that point, the road is not suitable for RV travel but is fine for passenger vehicles. Steep drop-offs and no guardrails cause travel to be slow.
On your way to the summit, you’ll undoubtedly spot mountain goats alongside the road grazing on the spare grass in the rocky meadows and seeking salt deposits. Look for Rocky Mountain bighorn sheep close to the summit, yellow-bellied marmots and the ever-elusive pika. At the summit, Crest House was built in 1941 and served as a restaurant and gift shop until it burnt down on September 1, 1979. Its remaining rock walls now serve as a windbreak for travelers. The summit has rest rooms and a large paved parking area. The commanding views from the summit’s viewing platform are unparalleled. On a haze-free evening, you can see the lights of Denver over 30 miles away as the crow flies.
Visitors to Mount Evans must be well prepared. Rest rooms are located at Summit Lake, halfway up the mountain and at the summit viewing platform. The air is thin at this altitude and dehydration and altitude sickness can result in serious consequences. Bring plenty of water to prevent dehydration and avoid strenuous activities at the summit, which can cause disorientation, headaches or dizziness. Mountains are notorious for sudden, possibly violent, changes in weather like rain, snow, and windstorms. It may be 90 degrees in Denver but only 40 degrees at the top of Mount Evans. Wear mountain-appropriate shoes and socks, layers of clothing, and a warm weatherproof jacket. It’s not a bad idea to bring extra jackets, hats, gloves, scarves and blankets, just in case. On the way down, stop at Echo Lake Lodge for a burger or homemade pie and an I-made-it-to-the-top souvenir.
Sources & References:
Beau Jo’s Pizza
(303) 567-4376
www.beaujos.com
Central City
www.centralcitycolorado.com
Central City KOA
(303) 582-3043
www.koa.com/campgrounds/denver-west
Echo Lake Lodge
(303) 567-2138
www.echolakelodgeco.com
Georgetown
www.georgetowncolorado.com
Idaho Springs Visitor Center
(303) 567-4382
www.visitidahospringscolorado.com
Mount Evans Recreation Area (USFS)
(303) 567-3000
www.fs.usda.gov

- OF
By Mark Quasius
98 Articles