Nebraska: On the Trail of Old West in a Toyota RAV4 AWD 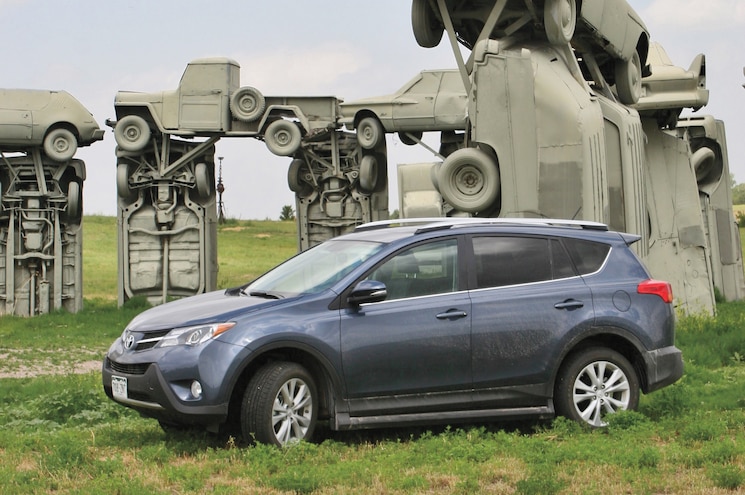 NEBRASKA FACTS: Statehood: 1867 • Population: 1.8 Million • Capital: Lincoln
Whenever Nebraska is mentioned, typically what comes to mind is Corn Huskers football, beef cattle, and the fact that within the state lies America’s “breadbasket.” All are correct. However -- and this is a big however -- there are nooks and crannies in western Nebraska that typically fall under the radar when it comes to understanding the history of the Old West and who we are as Americans. From North Platte to Ogallala, from Scottsbluff to Alliance, along with Crawford and Chadron in the northwest corner of the state are towns that for the most part go undiscovered, where the legacy of the Old West is as rich as the soil is black and fertile. Here, friendly, down-to-earth folks live; to-die-for food is served in abundance; lodging spans the comfort zone from rustic to pure luxury; and the fishing, hunting, and outdoor recreation make western Nebraska a destination to be discovered.
A midsize SUV Toyota RAV4 AWD, powered by a 3.0-liter V-6 coupled to a six-speed automatic transmission served as transportation for this journey into history. The RAV4 yields uncompromised luxury and comfort for this vehicle class, and over the 1700 miles to be covered, its excellent fuel economy (29.5 mpg) makes it a perfect fit for anyone’s budget. Had we wanted, we could’ve towed a 1500-pound camping trailer and enjoyed the many pristine campgrounds that lace Western Nebraska. We programmed our GPS and took off for adventure. 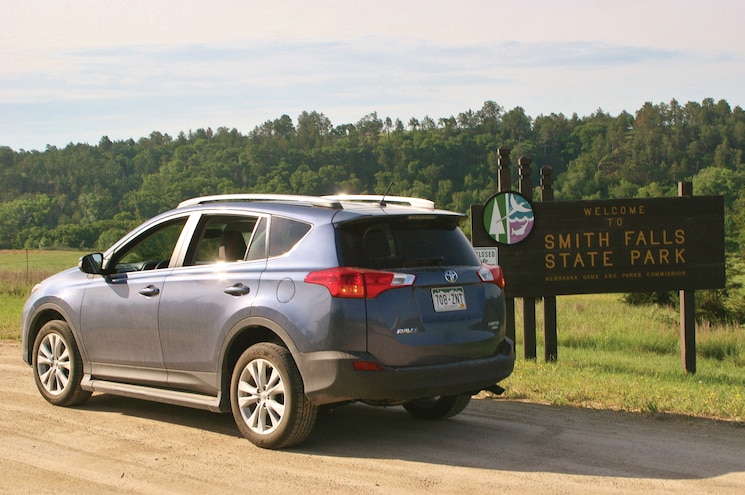 View Photo Gallery | 17 Photos
Photo 2/17   |   At Smith Falls, Nebraska’s newest state park, signs on the Jim MacAllister Nature Trail alert hikers to the diverse ecological systems unique to the valley.
A good place to begin is in North Platte at Buffalo Bill Cody’s Scout’s Rest Ranch. This is the headquarters of Cody’s Wild West Show, which was the genesis of today’s modern rodeo. Built in the 1880s, Buffalo Bill’s home is furnished with his belongings, and the house looks as though the legendary showman has just stepped out for a sarsaparilla. The walls are covered with original photos that chronicle his early days as a scout with the U.S. Army, the Indian Wars (1876-1890), his family and personal life, and the Wild West Shows he took around the world.
Another important stop in North Platte is the World War II Service Men’s canteen located inside the North Platte depot. Started by local women two weeks after the 1941 attack on Pearl Harbor, the canteen hosted 6 million troops transported by railroad across the United States during the war. Stopping here while the locomotive was being filled with water and coal, the servicemen were treated to cake, coffee, milk, and sandwiches. The canteen handled troops from a dozen trains a day and was open seven days a week, 52 weeks a year, until the spring of 1946. All of western Nebraska participated in this effort, with families donating part of their monthly sugar ration for the pastries.
North Platte also hosts the Golden Spike Tower and Visitor Center. Every Union Pacific railcar crossing the U.S. today is separated one at a time and sent to where it needs to go. It’s done using elevated rail beds (one end is higher or lower than the other end) and gravity is the source of locomotion with computers keeping track of every railcar. Railcars and diesel locomotives also are serviced and reconditioned here. An elevator takes visitors several hundred feet up to the museum’s observation tower for a bird’s-eye view of the operation. You can see a presention of the history of the railroad during the last 150 years, including the “orphan trains” that routinely emptied Eastern cities of children living on the streets and gave them out for adoption to families across America who needed labor. Brothers and sister and even twins were often split up, never to find out what happened to their siblings. 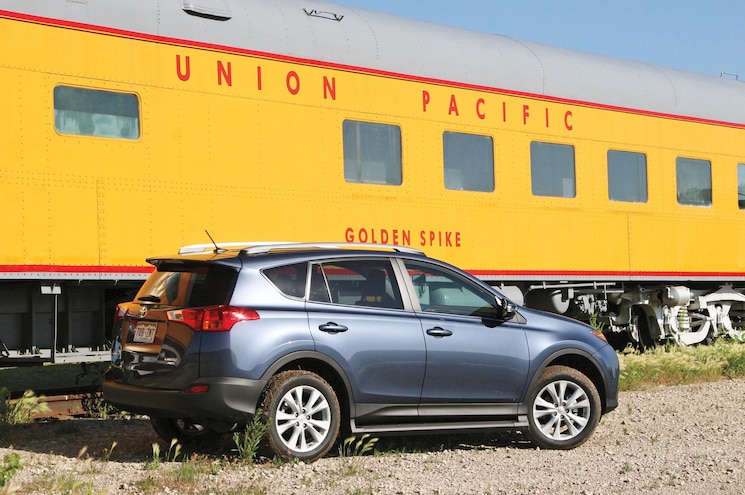 View Photo Gallery | 17 Photos
Photo 6/17   |   Nebraska Toyota Rav4 Side View
Ogallala, a town minutes west of North Platte on Highway 30 (the old Lincoln Highway), was one of the first towns at the end of the trail where Texas longhorns were driven north and shipped back east before the railroad reached Abilene, Texas, and Dodge City, Kansas. Front Street downtown offers a representation of this rich saga. Across the street is the Petrified Wood Gallery (you must check this out), and minutes from the gallery is “boot hill” cemetery.
On Highway 26 northwest of Ogallala are three geologic formations seen by the half-million pioneers who followed the Platte River on their way up the Oregon Trail between 1842 and 1869, when the transcontinental railroad was completed. These rock formations rise hundreds of feet into Nebraska’s pastel-blue sky and include Courthouse and Jailhouse Rocks, Chimney Rock, and Scotts Bluff. The pioneers could see these rock formations for days before actually reaching them, giving many the idea that this was the beginning of the Rocky Mountains. Today, it takes just minutes to get from one to the other.
There is speculation as to how and why England’s Stonehenge was built. Some think it’s a solar calendar, while others argue it’s something else. A mile outside the town of Alliance, there’s a similar-looking formation called Carhenge. Like Stonehenge, it’s built in a circular configuration, but rather than stones, full-size 1940s, ’50s, and ’60s trucks and cars protrude from the ground straight up or at angles. Other vehicles serve as bridges connecting those sticking out of the ground, while others are cantilevered off the ends of those poking at the sky. It’s a strange, surreal creation in the middle of nowhere. All the cars are painted gray for a stone-like effect.
In the very northwest corner of the state, near the town of Crawford, several destinations call for a stay of at least a couple of days. One is Fort Robinson, where Sioux Chief Crazy Horse was killed after he surrendered to the U.S. Army. Today the original fort is a state park offering overnight lodging and a bunch of fun things to do. You can stay in the old officer’s quarters or in the enlisted barracks. The lodge dining room menu features home-raised buffalo. Horseback riding and stagecoach rides are offered. The fort’s museum provides a no holds barred presentation of the Indian Wars, giving both sides of what took place in the West up until the 1890s when Crazy Horse and Sitting Bull were murdered. 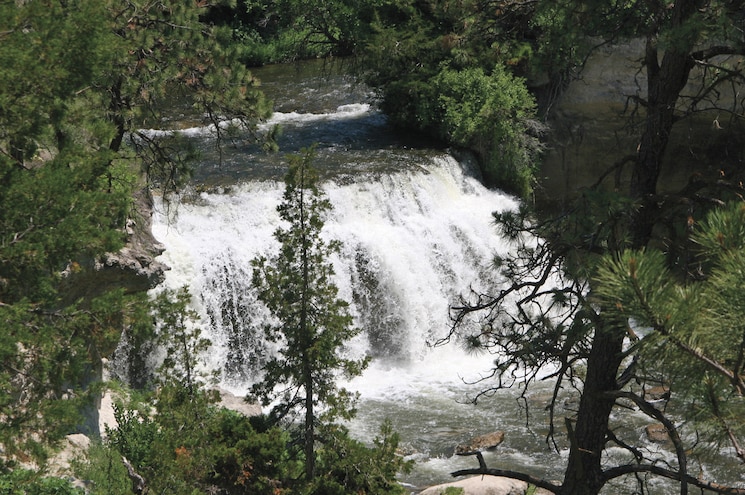 View Photo Gallery | 17 Photos
Photo 10/17   |   Smith Falls
The High Plains Homestead, a guest ranch near Crawford, has private cabins and an old saloon, and some of the best ranch fixin’s anywhere. Mike and Linda Kesselring brought in old buildings from old towns, ranches, and homesteads that had been left to the elements, restored them, and recreated an Old West town. Drive out for dinner or stay a couple of nights.
On Highway 20 is the Museum of the Fur Trade. This is the epicenter for research on the history of the fur trappers and traders out West from the mid-1700s until the 1840s. It has the largest collection of antique rifles anywhere, along with thousands of square feet of exhibits that tell the fur trade story.
Further east in Chadron is the Mari Sandoz High Plains Heritage Center, where a museum and permanent exhibition is devoted to this Nebraska author. She wrote extensively and intimately about her Swiss immigrant family and their 1890s pioneer experiences. Sandoz describes the struggles of everyday life on the prairie where, on a scale of 1 to 10, pleasures were often lower than a zero.
Her stories capture the pervasive loneliness on what was an empty plain, the effects the never-ending wind had on an individual’s sanity, and how the absolutely treeless landscape affected the human spirit. My, how things have changed! 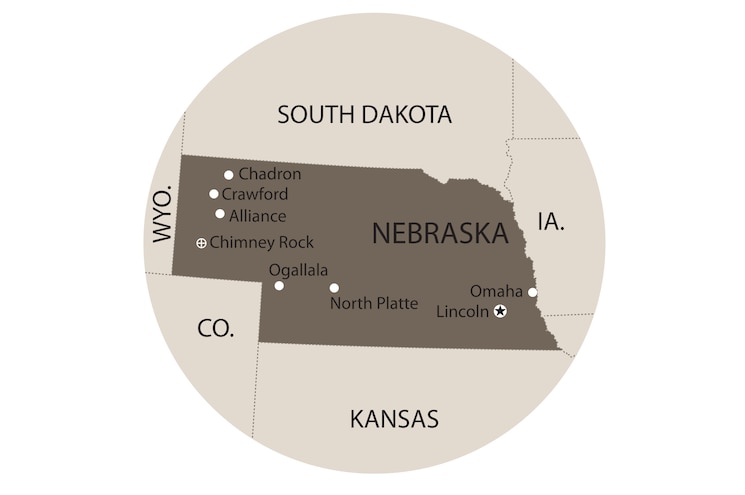