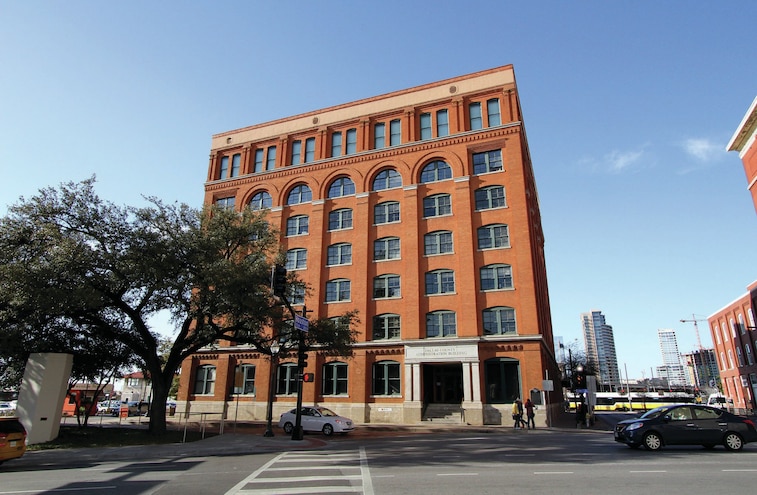 I remember Friday, November 22, 1963, quite well. I had just finished my lunch and was preparing to return to school when the news rang out: President Kennedy had been shot in Dallas. School let out early that day, and for the rest of the weekend, everyone was glued to the television’s non-stop coverage. It was a time any American alive at the time will never forget. It was inconceivable. This personable President who had led our country through some tough times was now dead.
President Kennedy had arrived in Air Force One at 11:37 a.m., landing at Love Field in Dallas. He was joined by Texas Governor John Connally, Vice President Johnson, and all their wives, in preparation for a 1964 presidential campaign stop. An estimated 200,000 Dallas citizens greeted the president’s motorcade as it passed through downtown on the way to a sold-out luncheon for 2,600 people at the Dallas Trade Mart. As the motorcade made the slow turn onto Elm Street in Dealey Plaza shots rang out. Eyewitness testimony led police to an immediate search of the railroad yards and fenced area north of Elm Street, which later became known as the grassy knoll, as well as the Texas Book Depository.
The entire event became larger than life as additional twists and turns evolved. View Photo Gallery | 18 Photos
Photo 2/18   |   The visitor’s entrance is in a museum addition. Visitors are equipped with headphones and audio devices to guide and explain the museum exhibits.
A search of the Texas School Book Depository revealed a sniper’s perch by a corner window on the sixth floor. Stacked cases of books were carefully arranged, and three spent rifle shell casings were found on the floor at 1:15 p.m. Further search revealed a rifle stuffed in a corner behind some boxes near the exit stairwell. Police questioned employees. However, during a roll call, they discovered Lee Harvey Oswald, an employee of the Depository who had begun work there the month before, was missing. Fingerprints on the rifle and on a stack of boxes in the sniper’s perch were later confirmed to belong to Lee Harvey Oswald. He had been seen on the sixth floor 35 minutes before the shooting and found in the building’s lunchroom two minutes after.
Shortly after, Oswald shot J. D. Tippit, a Dallas policeman, as the officer tried to apprehend him near his boarding house. After a scuffle inside the Texas Theatre officers arrested Oswald at 1:50 p.m. During the next 24 hours, more than 300 representatives from local, national, and international news organizations descended upon the Dallas Police headquarters to cover this major news event. On Sunday, as Oswald was being transferred from the city jail to the county jail, nightclub owner Jack Ruby stepped out of the crowd and fatally shot Oswald. Ruby was convicted and sentenced to death but died three years later while awaiting an appeal.
On November 29th, President Johnson established a special commission, headed by Supreme Court Chief Justice Earl Warren to investigate the assassination of President Kennedy. The Warren Commission concluded that Oswald acted alone in killing the President. A 1979 report commissioned by the House of Representatives added that a second gunman fired at the motorcade from the grassy knoll. This was supported by audio tapes from the event as well as witness accounts by people present that day. This was repudiated in 1988 by the Justice Department but conspiracy theories continue to evolve to this day. 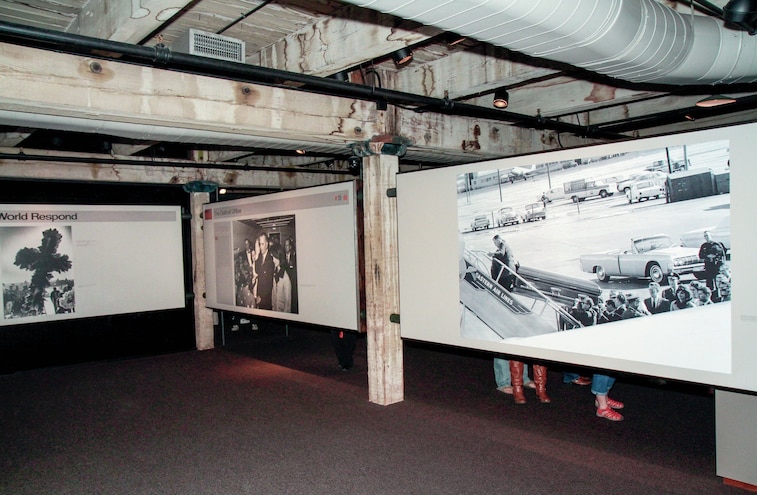 View Photo Gallery | 18 Photos
Photo 3/18   |   The tour begins with the history of President Kennedy, including his election campaign, the cold war and civil rights issues he dealt with, and other events leading up to his trip to Dallas.
The Museum These events, as well as the life and legacy of John F. Kennedy, are memorialized in the Sixth Floor Museum. The Texas Book Depository was sold to the city of Dallas, who now uses the first five floors as administrative offices. In 1989, the Sixth Floor Museum at Dealey Plaza opened to the public. Visitors enter via an annex and are fitted with audio devices and headphones to guide you through the exhibits. Visitors ride an elevator to the sixth floor and enter the building through a former window. The tour begins by setting the scene for the early 1960s. Items on display reflect the culture of the time, including social movements, political events, and a fragment from the Berlin Wall. Photographs and a short film documentary the life of President Kennedy. The Trip to Texas section follows and examines the reasons Kennedy made the trip to Texas.
The Corner Window section recreates the sniper’s perch as it was found on that fatal day. Cases of books are stacked in the correct location and this area is enclosed with glass to protect the original floor and exhibit. There is no public access to the window where it actually occurred, but visitors can look through the bank of windows to the side see Dealey Plaza much as Oswald would have seen it. The trees have grown in the last 50 years and the clear line of sight has been affected, but it affords a good representation.
The Crisis Hours section follows. An extensive collection of photographs and historic film footage documents everything that followed. Photographs and films of Lyndon Baines Johnson’s oath of office, JFK’s funeral procession, Jack Ruby’s shooting of Oswald and various public reactions, are all captured and on display. Among these is the original radio broadcast by Pierce Allman, the first reporter to broadcast from the Texas School Book Depository on November 22, 1963.
The Investigations section outlines the four official investigations covering the participants and their findings, beginning with the local investigation in 1963. A 10 foot by 10 foot model of Dealey Plaza, prepared by the FBI for the Warren Commission in 1964 and on loan from the National Archives, is displayed. In addition, you’ll see a collection of 13 cameras used in Dealey Plaza on November 22, 1963. Nearly 80 percent of the American public believes President Kennedy’s death was the result of a conspiracy. A wall is also devoted to the conspiracy theories that have surfaced over the years with the conspirators and their motives. 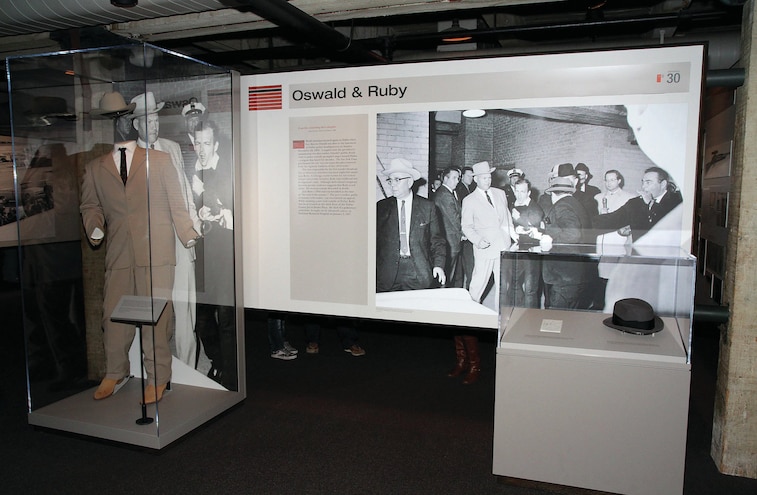 View Photo Gallery | 18 Photos
Photo 7/18   |   Jack Ruby shot Lee Harvey Oswald on November 24, 1963, in the basement of the Dallas police station while Oswald was being transported. The suit worn by Jim Leavelle, the detective escorting Oswald, Jack Ruby’s hat, and the handcuffs used to shackle Oswald are on display in front of Bob Jackson’s Pulitzer Prize-winning photograph of the shooting.
Final sections are devoted to President Kennedy’s legacy. A film narrated by Walter Cronkite looks at the aftermath of the assassination, his legacy of hope, and the impact of his death. Lastly, an identical rifle to the one Oswald used is on placed where he hid it, behind boxes, before dashing down the staircase to the lunchroom. Oswald’s actual rifle is in the FBI Museum in Washington, D.C.
The museum holds a first-floor reading room with an extensive collection of books, magazines, and newspapers covering topics from Kennedy’s life and legacy to conspiracy theories. A librarian can help you find the correct material, which includes rare and out-of-print items and nearly 1,000 oral interviews. A museum gift shop and restrooms are located in the museum’s entry at 411 Elm Street. Across the street in the historic 501 Elm building is the Museum Store and Café, where you can purchase light lunches, snacks, and beverages, gifts, books, and items by local artisans.
Surrounding Area
The Dealey Plaza National Historical Landmark District, established in 1993, encompasses the plaza and surrounding buildings, the triple underpass, the railroad yards, and historic switching tower. The grassy knoll rises from the north side of Elm Street to the edge of the stockade fence. Placards identify the exact spot where Abraham Zapruder, a Dallas dressmaker, filmed the entire event as the motorcade passed his location. Zapruder’s film footage was made available to authorities hours after the shooting and was crucial in helping them understand and analyze the shooting. It is the sole film footage of the actual assassination. A pair of taped Xs mark the two locations where President Kennedy was shot as the motorcade passed. The John F. Kennedy Memorial Plaza was designed by architect Phillip Johnson and dedicated in 1970. It is located two blocks away from the museum and is an open-air memorial depicting John F. Kennedy’s spirit of freedom. 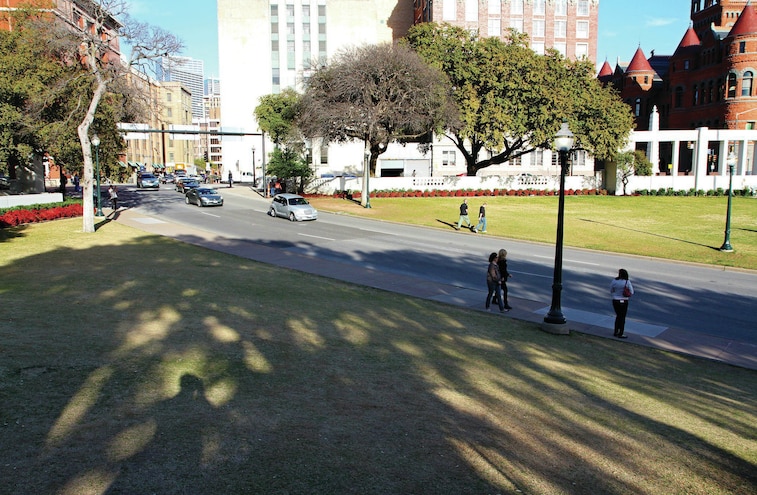 View Photo Gallery | 18 Photos
Photo 11/18   |   This image was taken from the same pedestal Abraham Zapruder was standing on when he filmed the motorcade, showing the same view that Zapruder had of the event.
Tips for RV Travelers
The Sixth Floor Museum at Dealey Plaza is in downtown Dallas, which is easy to access via numerous freeways. Although passenger vehicle parking is available at the museum, parking for large vehicles like RVs is unavailable. There are bus-parking areas quite a ways to the north. However, you’re better off leaving your RV at an RV park and driving your tow or towed vehicle. There are numerous RV parks in the area. In our case, we stayed in nearby Terrell, Texas, at Bluebonnet Ridge RV Park. From there, it was an easy 45-minute drive into downtown.
An average of 320,000 people visit the museum each year. Tickets provide timed entries in 30-minute intervals to eliminate overcrowding and ensure a more enjoyable visit. On busy days, popular entry times may be sold out. Consider buying your tickets online in advance. Arrive early and avoid busy weekend days, too. The museum recommends 90 minutes for the average visit, although, I would allow extra time to see Dealey Plaza and the area surrounding the museum. You may take photographs outside the museum but not inside. Lockers are available in the visitor center to check gear you don’t want to carry on the tour.
The Sixth Floor Museum is one of those bucket-list stops. It’s a fascinating look at a tragic event in America’s history, a snapshot of the era and a testament to John F. Kennedy’s eternal legacy.
Source
Sixth Floor Museum at Dealey Plaza
(214) 747-6660
www.jfk.org 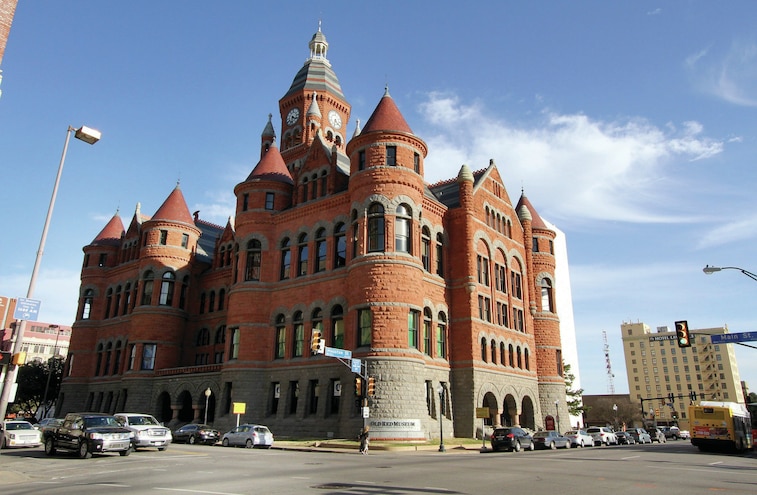 View Photo Gallery | 18 Photos
Photo 15/18   |   The Old Red Museum is across the street from the Sixth Floor Museum. The former Dallas County Courthouse, built in 1896, houses exhibits one the early history of Dallas. It is a worthwhile stop.

- OF
By Mark Quasius
98 Articles