Dotting America's landscape are skeletons of old trucks and tractors—rusting hulks of metal garnished with weeds poking through the floorboards and around the axles of equipment that once helped build America. In Dry Creek, Alexander, and the Russian River Valleys in northern Sonoma County, California, lovers of old farm equipment from every walk of the wine and olive oil business look adoringly in life's rearview mirror and see what many consider to be the golden days of the pickup and farm tractor. Nowhere is this more evident than in and around Healdsburg, California, where the word vintage (be it used to describe wine, trucks, or tractors) rolls easily off the tongue.
A place where very few old trucks and tractors can be found with yesterday's debris lining their beds, or jetsam and flotsam from the past stacked on bare metal seats, or on the tops of exposed coiled springs once covered with fabric, for here in northern Sonoma County "old vehicle archeologists" hold it to be self-evident that these are as prized as the juice that flows from the grape vines and olive trees that carpet the valleys. Yes, in and around historic old Healdsburg (founded in 1888 and just minutes north of where California declared itself a Republic in 1848), the passion for restoring old equipment ranks right up there with that typically reserved only for the nectars of the gods (wine and cold-pressed extra-virgin olive oil). With this in mind, we began a search to find such vintage steel. 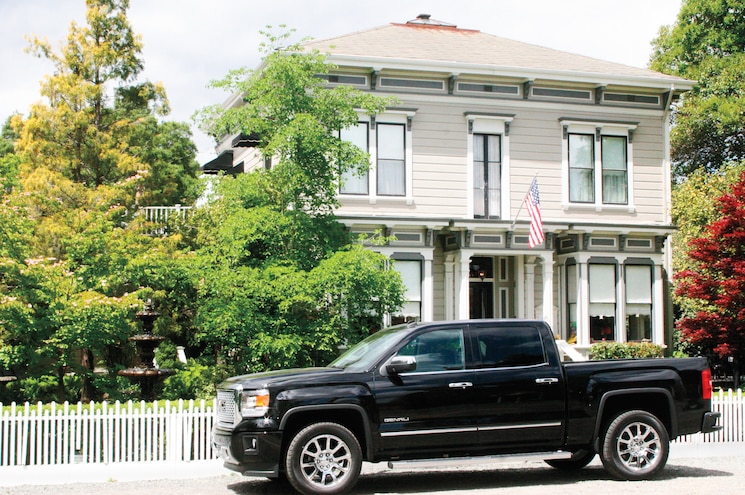 View Photo Gallery | 14 Photos
Photo 2/14   |   The Sierra Denali’s understated, handsome styling fits right in with Sonoma’s relaxed, elegant Northern California character.
Arriving in Healdsburg after navigating 500 miles up the long Central Valley of California, the prowess, comfort, and economy the 2014 GMC Sierra Denali that was our ride had not been taken for granted. A perfect fit for such a quest as this; a total of 1,200 miles were traveled in luxury and style. During this odyssey, the overall fuel economy was 21.7 mpg, which included continuous use of the A/C, driving the max speed permitted by signage, and the many back roads traveled.
The Sierra Denali keeps a running calculation of fuel economy, a moving average over the last 50 miles of operation. A real-time sliding window type of calculation, the fuel economy of the unit used achieved an amazing 29 mpg during one such 50-mile window. What this calculation underscores is just how far the fullsize truck and automakers have come in their effort to improve fuel economy.
Healdsburg
Arriving in Healdsburg, several nights would be spent in the lap-of-luxury at the Honor Mansion, an elegant B&B that has no equal. From here, we would take the Sierra Denali up the three valleys that converge here and into the vineyards and olive orchards where it would be used in the day-to-day operations of the producers. This is exactly the kind of setting where the utility of this pickup truck becomes immediately evident. It features a cargo bed volume of 53 cubic feet, and when called upon, it can tow 9,500 pounds of trailered equipment.
Speaking of "relish," while in Healdsburg we discovered there are those not in agriculture who are business people who also love old trucks and to peer into yester-year's "rearview mirror." One such Healdsburg business is Relish Culinary Adventures, owned by Donna del Rey, who owns a '53 Chevy panel van that she uses every day and has had since she started her culinary arts school. Emblazoned on the panel van's side are the words Relish Culinary School, for back in an earlier day when she was getting her business off the ground, she would take her van to events and put on cooking schools out of the back this vintage Chevy. Today, Donna has a state-of-the-art cooking school called Relish Culinary Adventures just a block off the downtown square. However, upon request, she still takes her culinary school-on-wheels Chevy panel van on the road out to those who want to host cooking classes on location. 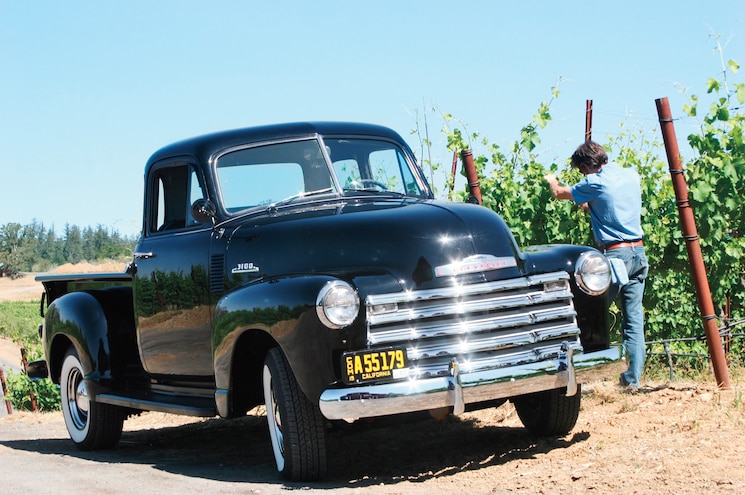 View Photo Gallery | 14 Photos
Photo 3/14   |   John’s Chevy is equipped with the original 216.5CI 6-cylinder engine and a four-speed transmission. John Merget let us take out his impeccably restored ’53 Chevy 3100 pickup truck. Even though he performed a full frame-off restoration, John chose to keep the reliable 6-volt electrical system in tact.
Another local car lover is John Merget, who, back in 1989, began restoration of a 1953 Chevy 3100 pickup truck. We talked him into letting us use it out at Trattore Estate Vineyards, where pickups play a vital role in doing business every day. John's Chevy is equipped with the original 216.5ci 6-cylinder engine and a four-speed transmission (with "granny low"). It came with a four-speed transmission, which he replaced with the four-speed. Along with this, he swapped out the original 4.11 gear in the rear end with a more highway-friendly 3.55 configuration. As a result, he says it cruises comfortably at 65 mph.
Full restoration included his rebuilding of all the mechanical components, the disassembly, stripping, painting, and reassembly of all sheet metal, detailing the frame, new window glass (except corner windows, which are original), and partial new electrical wiring. He retained the original 6V electrical system and says it has never failed him. The wheels and running boards have been powder coated, and the upholstery is new (including headliner, door panels, seat cover, and floor mat). John chrome plated the bumpers and grill bars, explaining that chrome plating was not available on trucks in 1953 because of the Korean War. The bed features a new oak bed-wood. He installed an original 6V pushbutton radio. Safety feature upgrades include seat belts and turn signals. The whole deal took him eight years to complete, for at the time he was raising a family, and the restoration was completed incrementally as finances permitted. 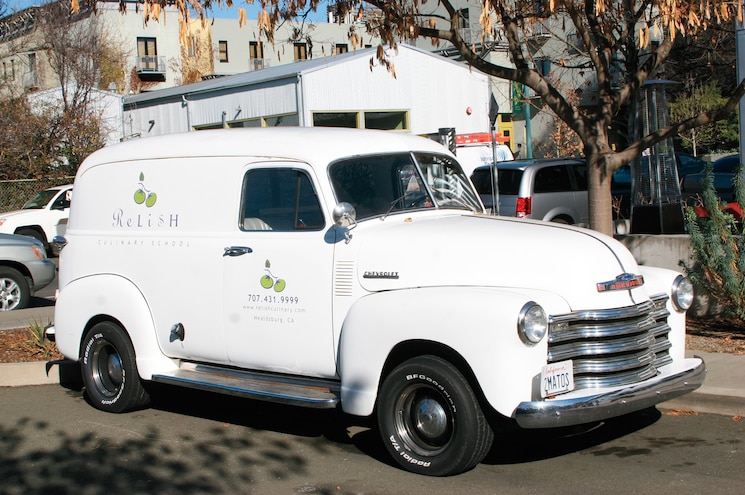 View Photo Gallery | 14 Photos
Photo 7/14   |   Donna del Rey uses her 1953 Chevy panel van every day to support her culinary school. She even holds classes out of it, from time to time.
Trattore Vineyards & Dry Creek Olive Oil Company
Trattore (Italian for "tractor") Vineyards owner Tim Bucher has several passions, one of which is old equipment. For his agriculture business, Tim chose to restore a vintage 1967 Bucher Tractor in its stock colors (Bucher red and Bucher yellow), not because of its name (he is no relation to the company) but because his family and the tractor manufacturer have their roots in Switzerland. This was the impetus behind bringing this old tractor from Europe back to the US and restoring it. Today he uses it in his vineyards and olive orchards.
Lambert Bridge Winery
On the west side of Dry Creek Valley at the base of the rolling foothills, Lambert Bridge Winery and Vineyards was our final stop in Northern Sonoma County. Along the winding blue-line back road that threads its way through the bucolic countryside and ultimately to Lambert Bridge Winery, the word on the street is that they have a '47 Ford 1-ton truck they've restored and that's fully operational. It has the original flat-head V-8 that Ford Motor Company built for nearly a quarter century, and suffices it to say, this post-WWII heavy-duty truck that harks back to the glory days of the late 1940s is a real beauty. Purchased at a local hospital fund raiser, this jewel now restored has a permanent home at Lambert Bridge Winery, along with an old Ford panel van that will eventually be restored. 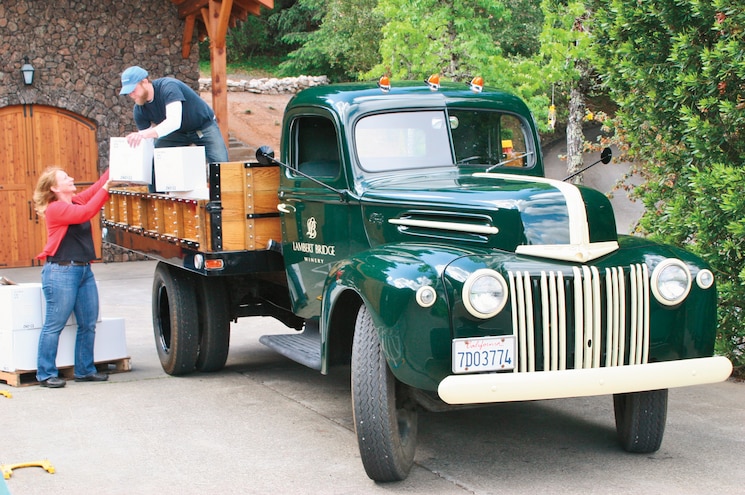 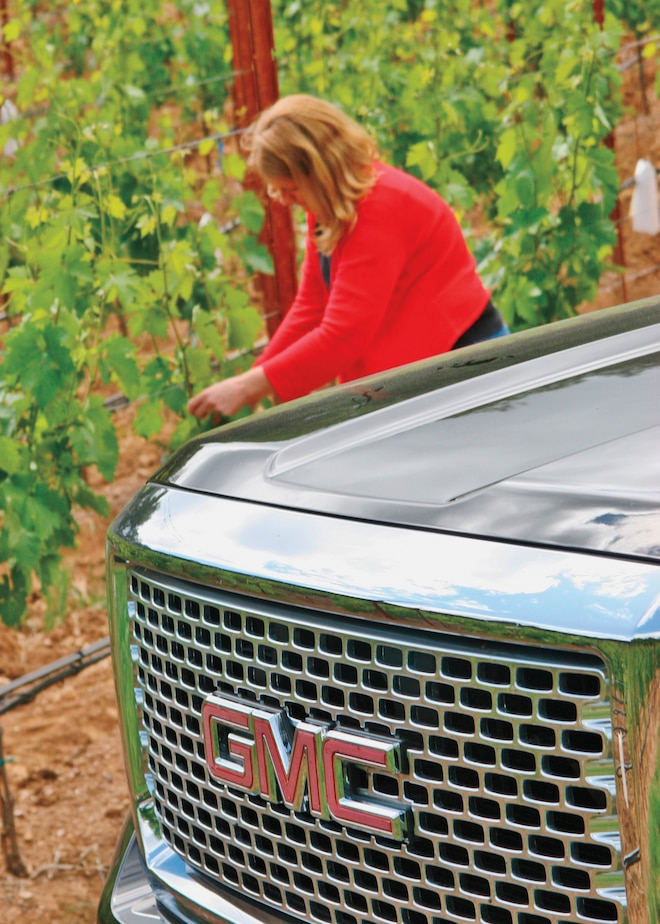 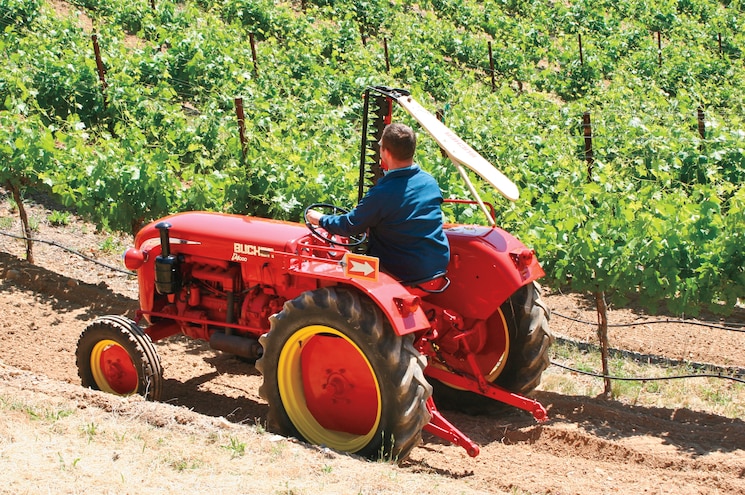