What Is The Difference Between GMC And Chevy? 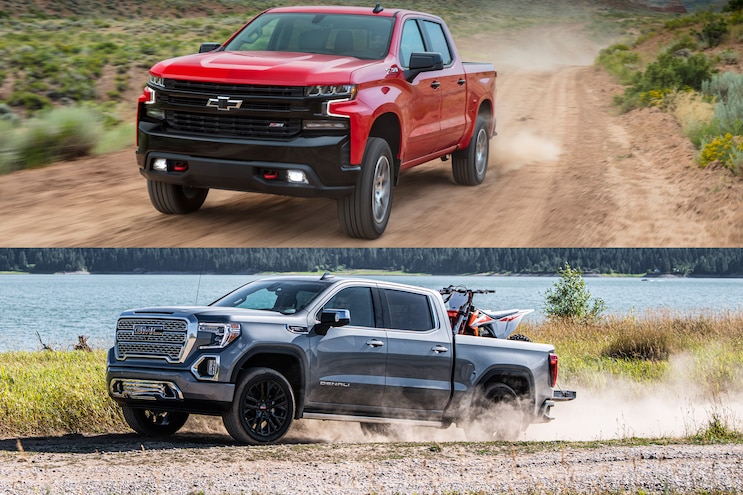 If you're like us there's a good chance that you've looked at GM's portfolio of pickup trucks at some point and wondered what exactly the difference between GMC and Chevy is. Don't worry, we're all in good company as this is one question that has plagued truck buyers for decades. Thankfully, the answer is more straight forward than you might think. Let's dive in.

While General Motors has owned many different vehicle brands through the decades, as of 2021 only Chevrolet, GMC, Buick, and Cadillac remain in the portfolio.

So, Why The Confusion?

Taken at face value one might have no question that Chevrolet and GMC are different brands. Unfortunately, there was a period of time in General Motor's history where both Chevy and GMC offered effectively the same products. When the Chevrolet Silverado and GMC Sierra debuted in 1998 the two pickups were essentially the same vehicle. The only difference between the two models was the grille, headlights, and badges. This practice of "badge engineering" continued through the first three generations of Silverado and Sierra and even extended to the full-size Chevrolet Tahoe/Suburban and GMC Yukon SUVs, along with to their Cadillac SUV counterparts to some degree. In fact, this platform sharing between Chevy and GMC is nothing new and can be traced all the way back to 1920.

Fast forward to 2018 and the launch of the all-new 2019 Chevrolet Silverado and GMC Sierra and we find the first time that the Silverado and Sierra are most different from one another. While both trucks ride on the same GMT1000 platform, the design and engineering teams have created trucks with almost entirely different exterior sheet metal (they share only the rear doors and roof panel) and largely different feature sets. The trucks do still share the chassis, drivetrains, and interior design.

In this sort of time of rebirth, General Motors has positioned the GMC brand as more of a luxury pickup manufacturer, while Chevrolet caters more to every type of truck buyer. This isn't to say that Chevrolet doesn't sell a high-end pickup in its High Country trim, or that GMC doesn't offer a base model, which it does. The bulk of GMC's sales come from its high-end Denali sub-brand, and this includes pickups. When the SLT and AT4 trims are included, these high-end models account for more than 80-percent of Sierra sales. And Chevrolet sells the majority of its product to traditional truck buyers and to fleets.

GMC buyers will find unique features available on trims as well that aren't found on the comparable Chevrolet product. For example, GMC offers a 6.2L V-8 engine in its off-road focused Sierra AT4, while Chevrolet's Silverado Trail Boss is fitted with the 5.3L V-8. GMC also offers magnetic ride control dampers as standard on Denali while the shocks are optional on High Country. GMC also had the exclusive on the fabulous Multi-Pro tailgate for a few years and offered it across nearly the entire Sierra lineup. For 2020 Chevrolet added the MultiFlex tailgate to its lineup as well. Sierra still offers the carbon fiber CarbonPro pickup box, which is unique to GMC.

Does Chevy and GMC Really Compete With Each Other Though?

While the feature sets are similar and differences, aside from styling, still subtle, all the research that we've seen and conducted has shown that GMC buyers rarely cross shop Chevy and vice versa. If there's one thing that General Motors has done right it has been marketing the brands to different demographics. In a typical month, Silverado outsells Sierra by about double. However, Sierra commands a much higher average transaction price. Taken on their own, Silverado and Sierra are outsold by F-150 and Ram 1500. But when combined, GM -ton pickup sales compete neck-and-neck with Ford.

What Other Chevy and GMC Products Are Similar?

While we've been talking primarily about Silverado and Sierra, there are a lot of other vehicle platforms shared between Chevy and GMC. On the pickup side, GMC's Canyon is shared with Chevrolet's Colorado midsize truck along with the heavy-duty Silverado and Sierra 2500 and 3500 pickups. Talking SUVs, Chevrolet's Equinox shares a platform with the GMC Terrain and the Chevrolet Traverse is a platform mate with the GMC Acadia. On the full-size SUV front, the Chevrolet Tahoe and GMC Yukon and Chevrolet Suburban and GMC Yukon XL share a platform.

The two brands have a few unique products as well, with GMC bringing the all-electric Hummer EV pickup and SUV to market without a Chevrolet equivalent. Chevrolet offers a more robust SUV lineup than GMC, with Trailblazer, Trax, Blazer, and the all-electric Bolt EUV gracing the brand's lineup.