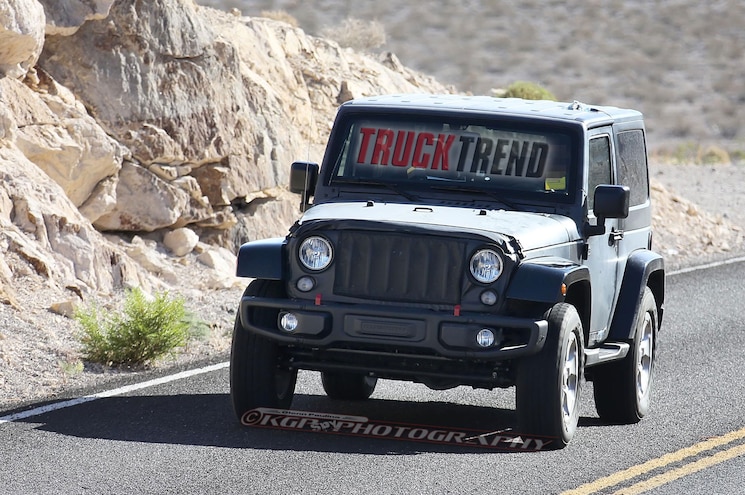 UPDATE: Sources can confirm that the Wrangler will be available with the 3.0L EcoDiesel V-6 and eight-speed TorqueFlite automatic transmission. There's no word on whether a manual transmission will be available with the EcoDiesel.
Outwardly, there’s not a lot to give away that this is the highly anticipated next-generation Jeep Wrangler. For all intents and purposes, it looks like a present-generation JK Rubicon two-door with a mesh mask over its grille and a flat-gray paintjob. However, a closer inspection reveals that this is not exactly your run-of-the-mill JK. Among several giveaways is a suspiciously low-hanging rear fuel tank. At first we thought it could be a diesel exhaust fluid (DEF) tank for the nearly certain diesel option, but we believe it’s just laying low because of the kludged body attached to the new chassis.
On the right side there’s what appears to be an electrical sensor wire running from underneath the hood and into the cab, indicating powertrain development testing. So what do we know for sure about the new JL Wrangler? We’re confident it will still have solid axles front and rear, a conventional two-speed transfer case, and a body-on-frame construction. There might be some aluminum on it, but we’ve been assured it will remain predominantly steel. Most models will get an eight-speed automatic, although we expect the six-speed manual to continue to be available. It will most likely get the next-generation Pentastar just announced for the 2016 Jeep Grand Cherokee as standard. The diesel option could either be the 3.0L VM Motori EcoDiesel used in the Ram 1500 and Grand Cherokee or a 2.8L or 2.2L I-4. Regardless, expect at least 300 lb-ft of torque and well more than 400 if it’s the V-6.
The solid front and rear axles on this mule look to be significantly beefier than they are on the current Wrangler JK. Not only will these tougher axles provide better off-road performance and durability, they'll also allow for other body configurations to enter the mix. As before, the Wrangler will come in short- and long-wheelbase styles, but, like we reported earlier this week, Jeep's iconic off-roader will once again be available as a compact pickup (unseen in the Wrangler/CJ lineup since the dearly missed CJ-8). Those heavy-duty axles should safely enable a payload of at least 1,000 pounds in the Jeep pickup's bed, to say nothing of the added weight of the longer frame and body. It's yet to be ascertained whether the Wrangler truck will be a single-cab shortbed based on the Wrangler Unlimited's wheelbase or if it will come with its own longer wheelbase.