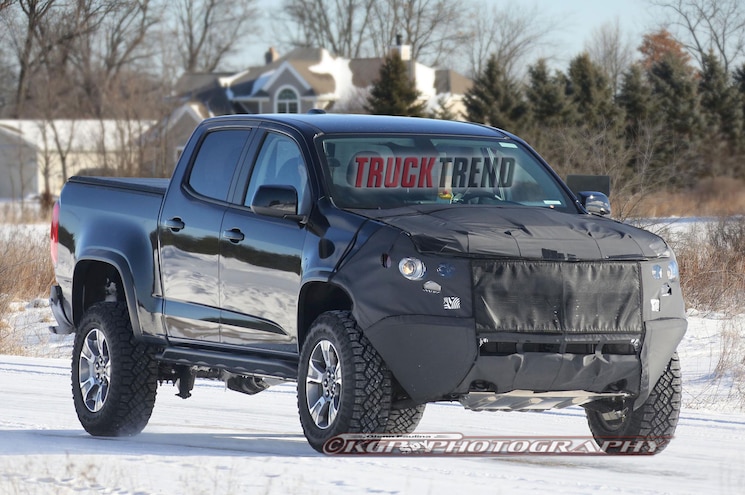 When Chevrolet unveiled the Colorado ZR2 concept at the 2014 Los Angeles Auto Show, truck enthusiasts were excited and hopeful that it was an imminent preview of a production-bound model. Trademark filings for a “Trail Boss” edition made it seem like a legitimate off-road model was in the works. While the Trail Boss did debut, it wasn’t the off-road hero many were expecting, with minor suspension tuning changes and marginally beefier off-road tires. However, all hope is not lost, if these latest spy photos are any indication. The photos show a clear increase in ground clearance and ride height over a standard Colorado, as well as a prominent underbody front skidplate and rock-rail side steps.
Unlike the concept shown at the L.A. Auto Show, which showcased the Duramax 2.8L I-4 diesel, this tester appears to be the 3.6L V-6, judging by the tailpipe. The rubber on this tester is Goodyear DuraTrac all-terrain tires, the same as offered on the Trail Boss, with the aforementioned and welcome increase in ground clearance. The dreaded low-hanging front air dam also appears to have been jettisoned on this tester for a more trail-friendly approach angle. We hope this time around this tester isn’t just another tease but a true preview of what’s to come.