HD Workhorse Sheds Its Camo for the Camera 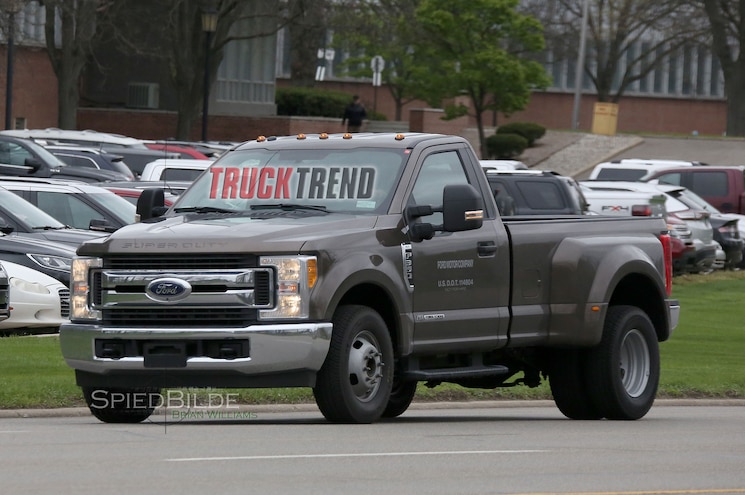 What we have here is the purest essence of the Ford Super Duty. Nothing represents the flannel, hard hat, git ‘er done spirit of Ford’s HD truck lineup like a single-cab dualie diesel. That’s just what we caught testing around Dearborn mere months before the 2017 Super Duty’s arrival in dealerships later this year.
How can we be so sure it’s a diesel? For one thing, it says so right on the door, with the “Power Stroke” badge proudly affixed to the door. Around back, there’s the telltale venturi exhaust tips. The one tidbit of information we still don’t know is what the output figures will be for the latest update of the 6.7L Power Stroke diesel. Considering the current version is no shrinking violet at 440 hp and 860 lb-ft, we expect a modest increase in horsepower, as well as an increase torque. The “1,000 lb-ft” figure has been thrown around the Truck Trend offices more than once, and Ford hasn’t called to ask us to temper our expectations.
Ram raised the bar to 900 lb-ft for the 2016 model of the 3500 truck equipped with the Cummins I-6, so as crazy as a four-figure torque output may seem, it’s not all that outrageous when viewed in context. Regardless of if it’s 880 lb-ft or a full grand, we expect the aluminum-bodied Super Duty to remain a formidable towing and hauling tool.