Model U - The Tesla Pickup Truck

We Spec Out Tesla’s Future Hauler 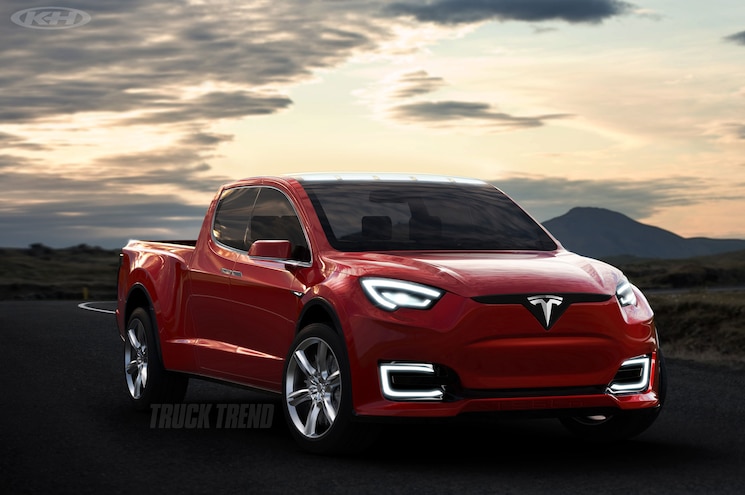 Illustrations by Kris Horton
Judging by the 325,000-and-counting preorders for the Tesla Model 3 and the associated media frenzy, there’s a lot of interest in the upstart California automaker. Best known for its Model S luxury sedan, Tesla has now dipped its toe ever-so-tangentially into the world of trucks with the Model X crossover. While the styling and proportions of the Model X aren’t quite as compelling and elegant as the Model S, there’s no disputing it’s a formidable machine, with more than 600 hp and an equivalent amount of instantly available electric torque. What got our attention are the multiple mentions given by Tesla CEO Elon Musk over the last few years about his desire to ultimately develop and sell a truck. Below are a few of our conjectures about what features will be on this future battery-powered hauler, which for the purposes of this feature, we will call the Model U for “Utility.” It also broadly fits into Musk’s naming scheme. We like “U S3XY.”
Trucks are all about work, and no matter how high-tech they are, that will be their focus, and that was also our focus in coming up with some of the features and design of our Tesla dream truck. However, just because it’s functional and practical doesn’t mean it can’t be good looking. And to that end, we’ll let the photos speak for themselves. Here are some of the key features we believe a Tesla truck might (and should) have.
It Will Shatter the Mold
Tesla is never one to follow convention. Aside from having four wheels and a steering wheel, the company largely goes its own way in design and engineering. Building a truck from the ground up as an electric (rather than an adaptation of a gas-powered model) allows for this. Not being constrained by existing truck design conventions will allow it to integrate a lot of handy, useful features that would not otherwise be possible or easy in conventional pickups.
It Will Have an Epic “Frunk”
One of the most beloved features on Tesla models is their front trunk or “frunk,” a cavernous storage space in the location where a gas engine would be if Teslas had one. We expect the Model U to have an incredible frunk. Behind the “T,” we expect the frunk on the Model U to incorporate commodious storage in standard form. We expect it to offer multiple USB, 12V, and 120V outlets and wet/dirty storage with a drain plug. Aftermarket drop-in accessories could include charging stations for cordless tool batteries, a refrigerator cabinet similar to that from companies like ARB and Engle, and multiple organization trays. 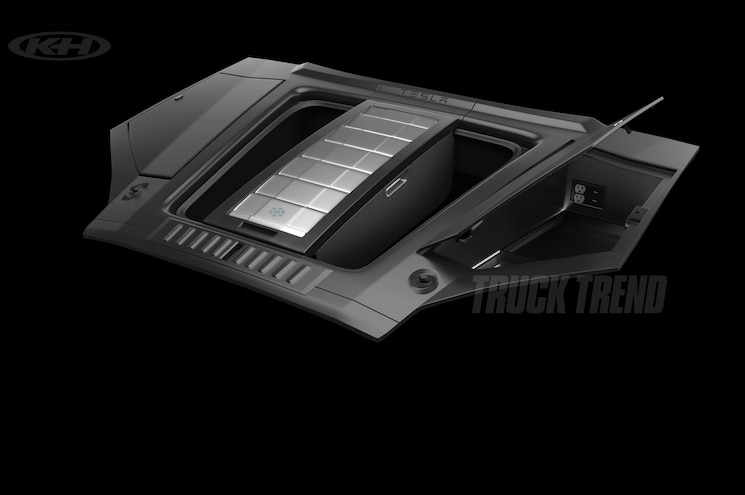 View Photo Gallery | 10 Photos
Photo 2/10   |   Tesla Pickup Truck Frunk Side
An Awesome Bed
Because it’s electrically powered, Tesla’s truck doesn’t have to rely on a conventional driveshaft and solid rear axle. For this application we expect in-wheel motors, which is the next logical evolution of Tesla’s technology. This would allow the bed to be far deeper than a normal truck’s, down to a height where tall or bulky items could simply be rolled into the bed. This would be a welcome feature for powersports enthusiasts. For models equipped with the built-in air compressor, air hose connections would be located behind a panel inside the bed for filling tires, blowing off dusty bikes or quads, or running air tools for repairs, as would multiple 12V, 120V, and 240V power outlets. 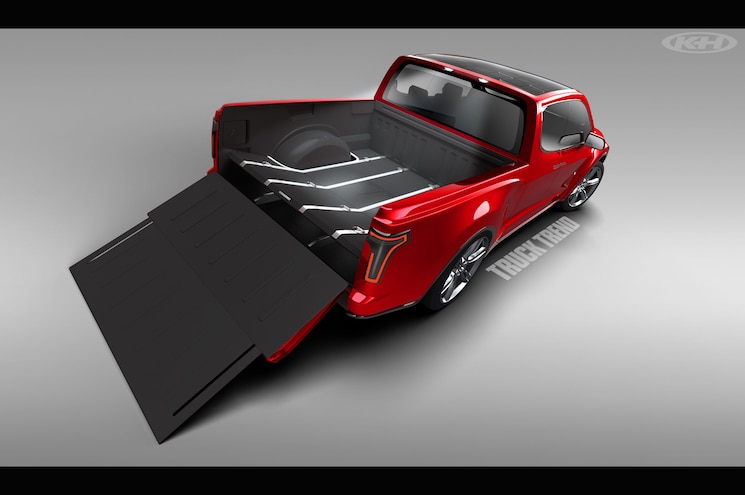 View Photo Gallery | 10 Photos
Photo 3/10   |   Tesla Pickup Truck Right Rear Tailgate Open
Ready for Work
We envision Tesla’s truck to be the hub of the job site. To keep from depleting the battery from a full day of using air tools hooked up to the truck and the wireless tool battery chargers, the truck will have a heavy-duty power input port to hook up to jobsite power. Workers can use the ample-sized optional frunk fridge to keep their lunches and drinks cold. If it starts to get dark, flip on the 360-degree LED “halo” light on top of the cab, casting bright light all around the perimeter of the truck.
A Lot of Power
Everyone was wowed when the Super Duty’s 6.7L Power Stroke Diesel was updated with 440 hp and 860 lb-ft of torque and the Ram 3500 got 900 lb-ft. Expect the top-spec Tesla truck to easily have that much torque and an unassisted towing capacity of 10,000 pounds. It would be the quickest-accelerating factory fullsize truck available. A 5-second flat unloaded 0-60 time is likely. Electric motors have proven they can produce gobs of power. However, they also can consume gobs of power, especially under load. That brings us to our next feature.
Home on the Range
One of the greatest challenges of owning an electric car is range anxiety, the fear of running out of electrons before the driver can get to a charger. Tesla has largely cured that disease with its fast-charging (and free) Supercharger network, which can provide Teslas with a couple hundred additional miles of driving in about 30 minutes.
Even so, a heavy work vehicle needs at least 400 miles of range for convenience’s sake. To that end, expect the Model U to have a base-level battery pack with a capacity of about 120 kWh and a top-level unit of around 160 kWh. That’s about double that of the Tesla Model S, resulting in some extra range to ease owners’ woes.
Modular, Portable Battery Pack
For those times where a little more range and power are needed, an auxiliary battery can be secured on top of the bed floor, resulting in only a minimal amount of storage loss. This would add another 100 or so miles of range when towing, and could be removed and mounted on the owner’s garage wall for auxiliary home solar power storage, or have its charge topped off by the owners home solar system. Think of it as a sort of Power Wall lite. The truck will also have a solar roof and optional solar tonneau panel for trickle charging when parked. Removing the battery and placing it in the bed would be an easy two-person job, with the battery sliding in and locking to the Model U’s bed floor rail system.
Sleek, Modern, Useful Interior
If the Model S, X and 3 are anything to go by, expect the interior of the Tesla truck to be sleek and outwardly minimalist, but packed with handy and cool features. It will likely have a large touchscreen on the dashboard, controlling almost all functions. The instrument display would be infinitely configurable to the driver’s tastes, displaying everything from power consumption, estimated range, inclinometer, and more. Because it won’t have to accommodate a traditional frame, axle, driveshaft, and transfer case, we expect the floor of the cab to be lower for improved ingress and egress, and the comfort and room will be generous. Depending on how far along the technology and regulatory environment have come, some form of Tesla’s Autopilot autonomous driving system will likely be employed. Additional features specific to the truck that would be handy are auto trailer hookup and reversing; range prediction based on route, topography, speed and climate; and estimated arrival time. Naturally, there will be an abundance of connectivity and entertainment options.
Innovative Four-Wheel Drive
Electric motors allow for essentially infinite low-range, and it’s likely the truck will offer an air suspension system, raising or lowering the truck by several inches. Expect the underbody to be completely sealed aside from a few service panel openings—essentially a bumper-to-bumper skidplate. As an outgrowth of the Autopilot program, look for an “AutoSpotter” program to recognize obstacles and help get the truck through tricky parts of an off-road trail.
It Won’t Be Cheap, But There Are Options
Tesla is known to blow the budget on some of its models, and the truck will likely be no exception. However, if Tesla is truly determined to take a chunk out of F-150 and Silverado sales, it knows its truck can’t start in the six figures. However, expect fully loaded models to go for as much or more as a loaded Model S or X. We expect the starting price to be around $60,000 to $70,000 for a basic crew cab all-wheel-drive model. Tesla’s version of the King Ranch or Denali will likely be in the $100,000 to $150,000 range. 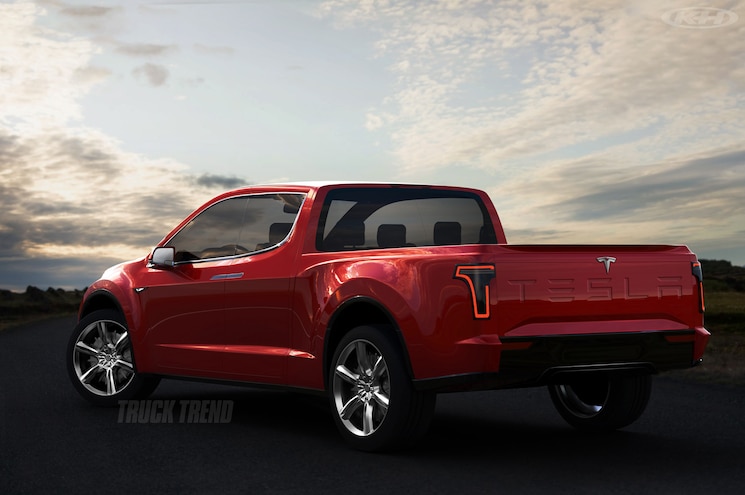 View Photo Gallery | 10 Photos
Photo 7/10   |   Tesla Pickup Truck Left Rear Angle
Considering the steep cost of entry, the Model U would be a prime candidate for future car-sharing and short-term rental systems. A homeowner’s association or private enterprise could operate a fleet of Teslas and rent them to members for a few hours or a few days in exchange for a small fee. To offset the purchase price, the truck could be also offered for hire through an app, with hourly, daily, or weekly rental rates, set by the owner/admin. And of course, expect the Hollywood elite to flock to the Tesla pickup in droves. People spend $200k on Mercedes-Benz G-Wagens, so why wouldn’t they on environmentally friendly pickups?
Aftermarket Friendly?
Such a radical departure from truck convention may make it seem like the Tesla truck is impenetrable by the aftermarket. Certainly in conventional terms, it will require a radical rethink by accessory manufacturers. However, the built-in power and air supplies will open up heretofore-unimagined possibilities for vocational and recreational accessories making both work and play easier and more practical. Tesla could also facilitate the aftermarket by offering modular compartments and connections to accommodate the imagination and ingenuity of accessory manufacturers. A Software Development Kit would allow control and monitoring of powered accessories from the center console or through a mobile app.
Our Future Fantasy
Yes, this is basically our adolescent wish list for the future truck of our dreams. However, Tesla has a good track record of listening to its customers and incorporating their suggestions into future products. If the eventual Tesla truck has even half of the features we’ve mentioned here, we’d be thrilled. Our hope is that the price will be closer to $60,000 than $150,000 for a model we’d want, but we know technology doesn’t always come cheap, and judging by the sale of premium trucks, the idea of a six-figure pickup might have some legs.