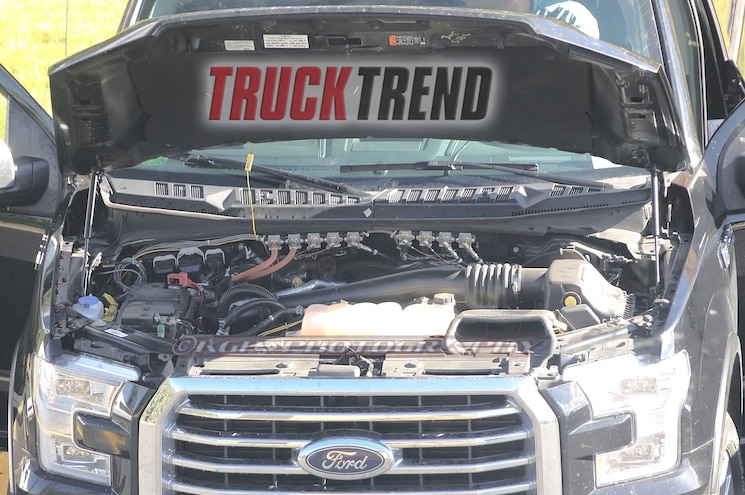 We’ve seen video of a Ford F-150 with an uncharacteristically clattery engine and photos of a strange-looking exhaust tip. All indications were that a diesel engine for the F-150 was nearly inevitable. With this latest batch of photos, it tips the scales even further in the direction of inevitability. This time, the spy shooter was able to get close enough to the truck to show a diesel fuel filler neck, a warning placard on the dashboard saying “diesel fuel only” and some telltale soot around the tailpipe on a white test mule truck.
The only items conspicuously missing, and which will certainly appear on the production model, is a diesel exhaust fluid (DEF) fill neck. Beneath the fuel door is only a green-ringed capless diesel fill neck. General Motors has the DEF fill for its Silverado and Sierra HD trucks underneath the hood. However, this is an exception to the industry norm of placing the DEF fill alongside the fuel filler neck. The Colorado and Canyon diesel locate the DEF fill alongside the fuel filler neck. We expect the production model to have a rectangular fuel door opening to better accommodate a DEF fill. Ram somewhat awkwardly squeezes the DEF and fuel filler necks alongside each other in a round fuel door opening.
As previously reported, we expect the engine to be the 3.0L “Lion” V-6 out of the Range Rover and Range Rover Sport Td6 models, where it produces 254 hp and 440 lb-ft of torque. In the F-150, it will likely be paired to Ford’s excellent new 10-speed automatic transmission. If the output figures are the same as the Range Rover applications, this would give the diesel 30 lb-ft less than the latest 3.5L EcoBoost V-6 update but 14 more horsepower and 20 lb-ft more torque than the current Ram 1500 EcoDiesel. It is unknown if the “Power Stroke” brand will be used on the new engine or a new sub-brand will be created to designate the model. One of the test mules photographed had “XTR” badging. It is unknown if this is a production-intent trim or simply random lettering to throw off spy photographers. The 2018 F-150 diesel could be the first fullsize pickup to reach or surpass 30 mpg highway.