Are You Ready for the Tundra Heavy-Duty Dualie Diesel?

They all seem to start the same way--what if we take parts of this real thing and turn it into this other thing that's never existed? Would it be cool? From our experience, the answer is usually simple: No. In fact, much of the time we have to keep ourselves from laughing. But every once in a while a vehicle comes along that doesn't try to be over the top, doesn't try too hard to grab the spotlight, doesn't overreach its design promise. And is very cool. 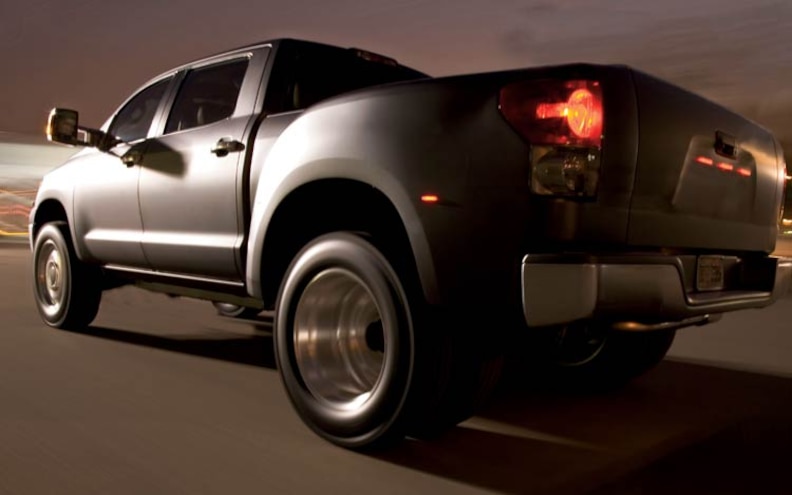 View Photo Gallery | 12 Photos
Photo 2/12   |   custom Toyota Tundra HD rear View
"It started last year," says Warren Victor, Toyota's truck-builder extraordinaire. "Right after last year's SEMA show, I suggested Toyota let me do something really big." Translated, that meant Warren wanted to do the biggest and coolest Toyota truck ever built.
(WARNING! DISCLAIMER ALERT! We want to be clear right up front. Toyota wants to make sure we don't accidentally misunderstand what it means when it commissions a special project like this. In fact, it doesn't even want us to use the word "concept" because as anyone who's been to an auto show knows, what's shown as a concept often becomes reality a few years later. As we understand it, this custom project is just a one-off physical expression from a mad scientist. Yeah, right.) 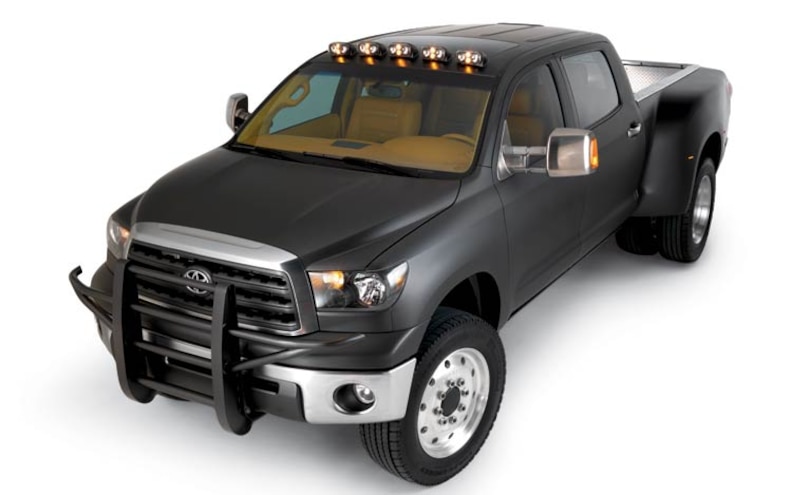 View Photo Gallery | 12 Photos
Photo 3/12   |   custom Toyota Tundra HD front View
To get the correct proportions, Victor started with the CrewMax front frame to get the interior space he wanted, but knew he needed more than that model's 5-foot bed. He also worried that if he opted for an eight-foot bed, the Tundra would be too gargantuan to be taken seriously. "The goal was to create the anti-SEMA truck--I like the drama of something that's subtle and subdued," says Warren, "especially in a place like Las Vegas where this show is constantly going over the top." 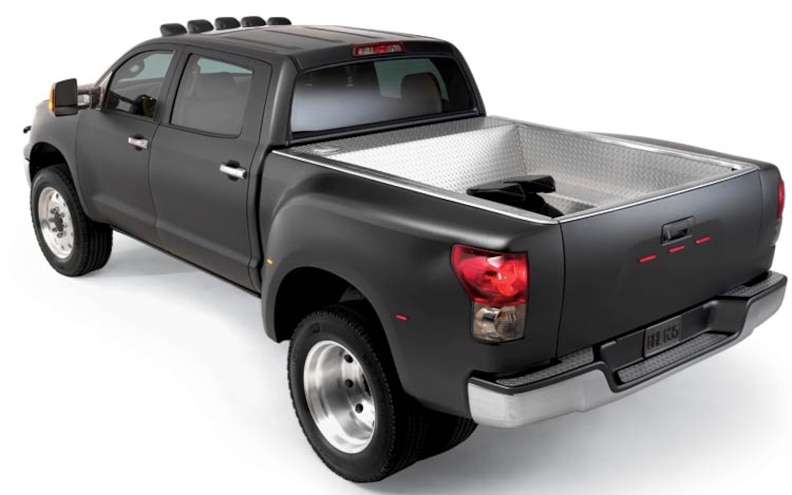 View Photo Gallery | 12 Photos
Photo 4/12   |   custom Toyota Tundra HD rear View
Grafting a rear frame section of a Tundra regular cab with a 6-foot bed, the project CrewMaximus (our pet name) has a wheelbase of almost 160 inches--similar in length to Ford and Dodge shortbed dualies. Wheelwell to wheelwell, the dualie's over eight feet wide and more than seven feet tall. Contributing to this lofty stature are six Michelin Energy 295/60R22.5 commercial-duty tires wrapped around a set of custom eight-lug brushed-aluminum Alcoa wheels. At nine inches wide and over a yard tall, the six tires give the Tundra dualie a medium-duty look, projecting mass and strength. And it doesn't just look strong: The heavy-duty Meritor rear axle has a set of ring and pinions that measure over 13 inches and are rated to haul as much as 25,000 pounds, with an estimated GVW closer to 35,000. Up front, the truck is two-wheel drive, but the upper A-arms have been widened to hold two sets of Bilstein coilover shocks to handle the extra weight from the surprise under the hood. 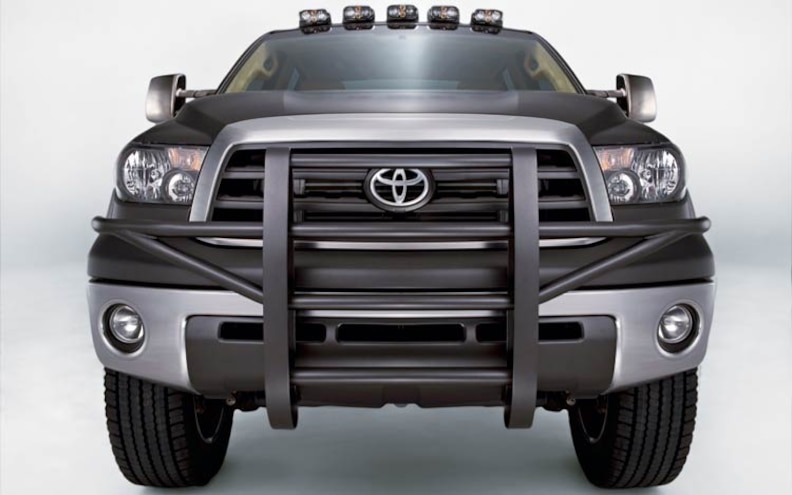 View Photo Gallery | 12 Photos
Photo 5/12   |   custom Toyota Tundra HD front Grille View
From the outset builders knew there needed to be something special to motivate a truck of this size and scope. Pickups that play in this arena all have strong diesel engines running in the neighborhood of 300 horsepower and 600 pound-feet of torque because they typically have to deal with enormous loads. Keeping with the standard, Warren chose a Hino Trucks USA high-pressure common-rail turbodiesel 8.0-liter inline-six used in the U.S. and Japan in a wide range of commercial and cargo-moving applications (Toyota owns Hino). Although the rating for the engine output runs a wide spectrum, this particular engine was tuned to make 305 horsepower and 610 pound-feet of torque. But if those numbers aren't to your liking, never fear--we're told with some slight tuning, ratings can climb an extra 200 horsepower and 400 pound-feet and work just fine. Many of those commercial applications also run the same Eaton five-speed manual transmission used here. Additionally, a heavy-duty custom split driveshaft and remote power-steering unit were designed to deal with expected stresses.
With the exception of the widened front wheel arches to handle the big wheel and tire package, each body panel on the CrewMax cab is stock Tundra issue. The bed, however, is something special. Because of its shorter length, the swoop and size of the dualie flares are dramatic. Add to this that the flares don't taper off as they reach the rear end of the truck, staying as wide at the back as they are at the widest part of the flares. As you might expect, with a back end that's more than eight feet wide this gives the tailgate a hugely dramatic look. The inside of the bed is covered in satin diamondplate with a Reese 24,000-pound-rated fifth-wheel trailer hitch standing like sculpture in a pool of chrome. At the back of the bed sits a 50-gallon exterior fuel tank. Bumper, exhaust, and trim accents have all been treated to take the shine off of every piece. This specific detail is designed to work with the deep Toyota Gray that's been saturated with flake chips to give it that Stealth Bomber light- (and radar-) absorbing, flat-finish look. Because this truck measures well past the 80-inch mark, federal regulations require it to have extra roof and side-running lamps. Rather than just add a lightbar, Warren had five PIAA 4000 four-way lights integrated into the roof of the truck. The only other exterior accents include a new grille and lower valance.

View Photo Gallery | 12 Photos
Photo 6/12   |   custom Toyota Tundra HD engine View
The cabin is difficult to describe. Depending on how closely you look (the closer the better), it would be easy to assume you're in a lush Ferrari or Bentley Flying Spur. The Ginger Leather glows a warm orange and was wrapped by noted SoCal shop Fast Ed's Interiors to fit like an Italian glove around every door panel and cupholder. The seats are stitched like a luxury baseball mitt, while the roof and dash are covered in color-matched natural hides. Kenwood supplied the three video monitors, each with its own controls, ready to play radio, CDs, DVDs, or video games. A special gauge cluster was chosen--it's more in line with upscale SUVs than the current Tundra's "barrel" setup. With the exception of the longneck Eaton shifter, the entire dash and center console were intentionally left looking as factory as possible. Again, with the anti-show-truck theme. Rear bucket seats offer eight-way adjustability, each with its own center storage console and private DVD screen.
No word on what Warren Victor's next project is going to be, but we bet it'll be something Toyota will be proud of and will have people talking for some time to come. You can be sure we'll be watching.