What a Concept! But Will GMC Build the Sierra All Terrain HD? 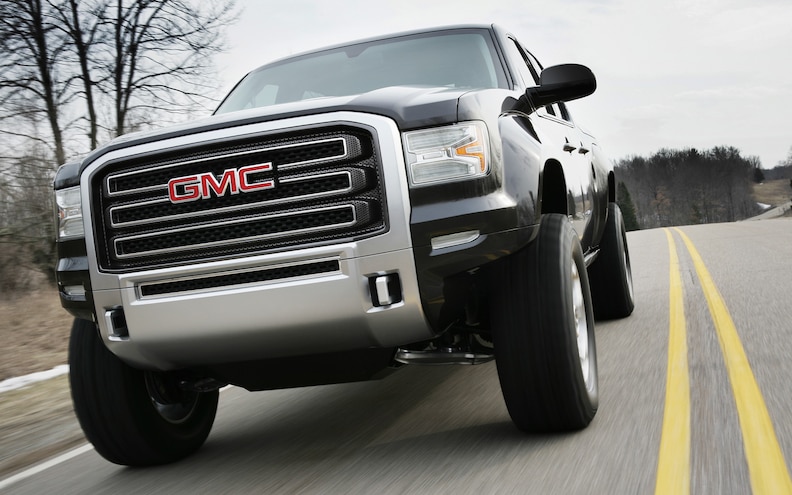 This concept was designed as a tough, high-tech work truck, with an industrial bias. It was built from durable materials and shown with an engine-driven 5000-watt generator. The concept was powered by an early version of the Duramax 6.6-liter turbodiesel.
View Photo Gallery | 17 Photos
Photo 14/17   |   2000 GMC Terradyne Concept Front View

Terracross (or Terradyne: the Sequel), was an SUT that used similar styling to the Terradyne, and featured a three-panel sliding-glass roof and an early version of the Midgate. This all-wheel-drive concept used GM's 3.4-liter V-6.
View Photo Gallery | 17 Photos
Photo 15/17   |   2001 GMC Terracross Concept Rear View

The third in the Terra series, the Terra4 made use of GM's Quadrasteer four-wheel steering, and was a parallel hybrid truck that used the 5.3-liter V-8 Vortec and a 4.8-kW motor. The 4 in the name was because of the concept's four-wheel drive, four-wheel steering, four doors, and four ways to access the cargo area.
View Photo Gallery | 17 Photos
Photo 16/17   |   2002 GMC Terra4 Concept Front View

Had this concept made it to production, it might have saved Hummer. The HX was shorter than the H3, with a 304-horse direct-injected 3.6-liter V-6. It had a removable roof, fenders, and doors, Fox shocks, and awesome approach and departure angles. This one would've had Jeep shaking in its boots.
View Photo Gallery | 17 Photos
Photo 17/17   |   2008 Hummer HX Concept Front View