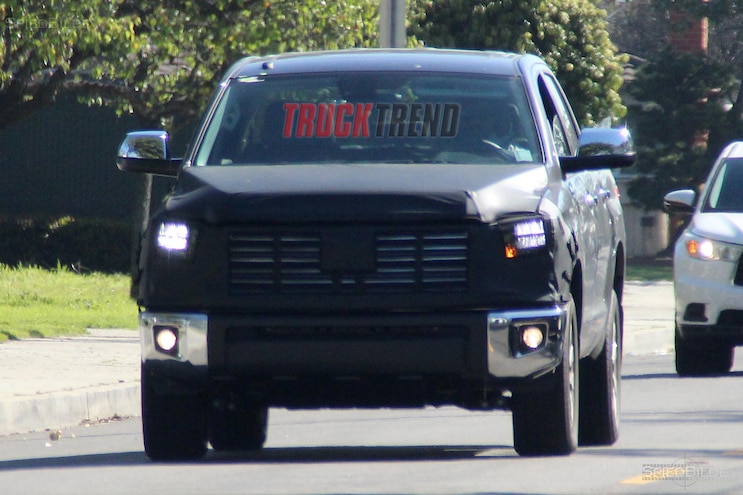 With the 2017 model year, the Toyota Tundra is going on a full decade since its last full redesign in 2007. Compared to its domestic and even import-brand peers, the truck is showing its age. The truck got a minor interior and exterior refresh in 2014, but mechanically, little has changed since the switch from the 4.7 to 4.6L V-8 in 2010. From the looks of these photos, it appears Toyota has a little more detail love in store for the current Tundra before an all-new model comes out, likely for 2019.
The most notable change visible in these photos are LED headlights. This feature rolled out in the mainstream of Toyota models with the Corolla in 2013. Other than the LED lights and possibly a revised grille, it looks like little else has changed on the Tundra. No major powertrain changes are expected until the all-new model. Toyota has said a hybrid version of the Tundra will be coming at some point. Ford and Toyota initially signed a tentative joint venture agreement to develop a hybrid system for fullsize trucks in 2011 but split ways in 2013. We don’t expect to see a hybrid Tundra until the next-generation model arrives.

Truckin
Truckin
Toyota Tundra Suspension Lift with BDS, Fox & Fuel
We don’t get to do a lot of Toyota tech around here. It’s not because we don’t want to. We lov...
Jeremy Cook – Jul 6, 2020
Truck Trend
Truck Trend
Daily Driven: 2018 Toyota Tundra Limited
If ever there were a vehicle in need of an overhaul Toyota’s Tundra would be it. With its last maj...
Jason Gonderman – Jul 12, 2019
Truck Trend Network
Truck Trend Network
Toyota to Base Next-Generation Tacoma and Tundra on the Same Platform
Toyota will base the next-genTacoma and Tundra on the same platform—cod...
Brett T. Evans – Apr 8, 2019
Truck Trend
Truck Trend
Adventure: 2019 TRD Pro Family Drive On The Rim Rocker Trail
We head out to conquer the Rim Rocker Trail with the folks of FJ Summit a...
Sue Mead – Nov 16, 2018
Join Our FREE Truck Trend Network Newsletter