Six-Lug Wheels Give Away New Platform 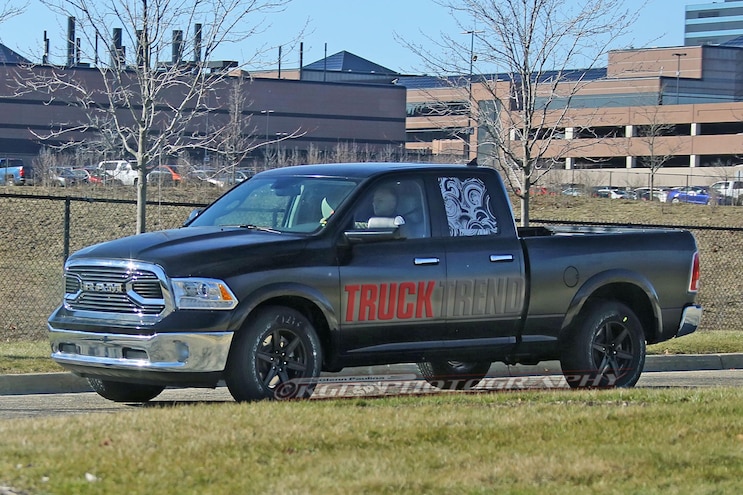 We know for a fact a new Ram 1500 is coming. We’ve seen multiple test mules out and about, typically in crew cab configuration. The latest iteration we caught around Fiat Chrysler Automobiles (FCA) headquarters in Auburn Hills, Michigan, is a Quad Cab version. At first glance, it just looks like your standard Ram 1500, albeit with crude exterior finishes and swirly camouflage on the rear windows. However, the eagle-eyed among you may notice the 6-lug wheels, which are highly unusual for the Ram 1500, which has always had 5-lug wheels.
Why the switch to 6-lug? It could be one of several reasons. Either the next-gen Ram is gaining weight over the current model, its towing and payload capacity are getting a serious increase, or to join the ranks of its peers with a common wheel bolt pattern. Our money’s on the latter two. Although the OEMs may get some relief on future fuel economy standards under the new EPA administrator Scott Pruitt, the manufacturers have largely already baked in lightweighting into their vehicle development programs for the foreseeable future. 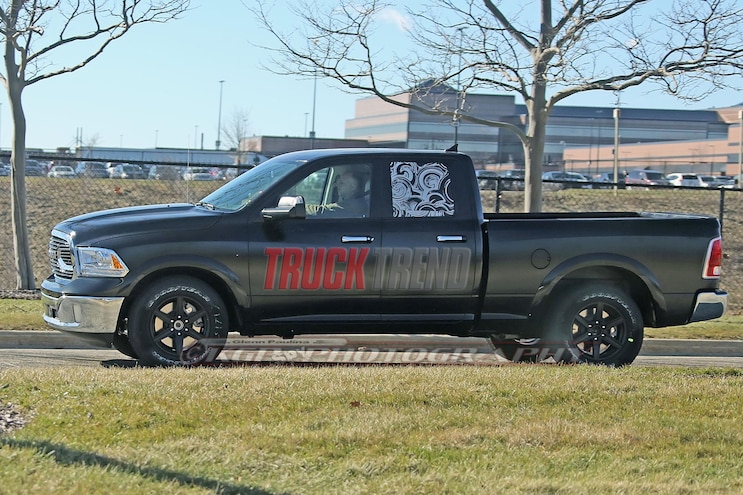 View Photo Gallery | 5 Photos
Photo 2/5   |   2019 Ram 1500 Quad Cab Mule Left Side Profile
It’s important to note the prevailing bolt pattern among 6-lug wheels is 6 by 5.5 inches, used by GM, Nissan, and Toyota on the Tacoma and 4Runner. The Tundra uses an unusual 5 by 150 mm bolt pattern, and Ford’s 6-lug spec is a proprietary 6 by 135 mm specification. The Ram 1500’s current bolt pattern is 5 by 5.5. The most likely move is to the prevailing 6 by 5.5-inch standard.
In terms of powertrain, we’re expecting the 3.6L Pentastar V-6, the 3.0L EcoDiesel, and possibly a Hemi, although we’ve heard reports the 5.7L Hemi may not make it to the next-generation truck, leaving the possibility for a turbocharged Pentastar to counter Ford’s EcoBoost strategy or employing a version of the larger 6.4L Hemi V-8 used in the Ram 2500 models. We expect the full unveil of the next-gen Ram 1500 at the 2018 Detroit Auto Show.