Could Next-Gen Trucks Use More Aluminum Than Originally Thought? 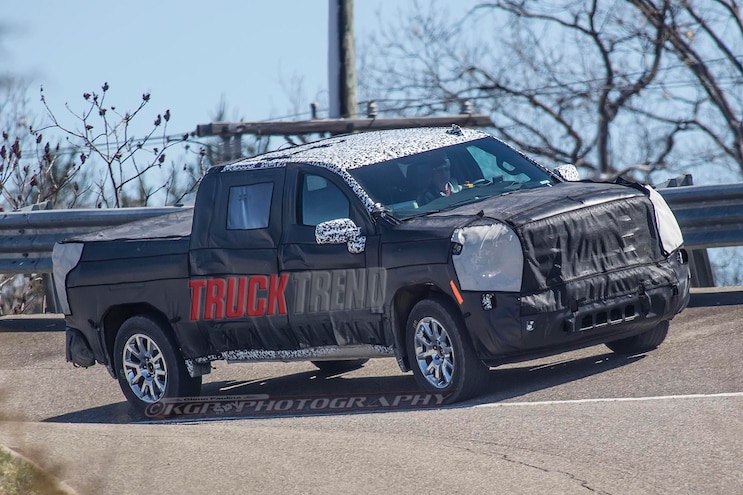 Lately, we’ve been getting a lot of photos of the next-generation fullsize trucks from General Motors. While GM is trying to fake us out with a fake oval in a grille and cut-down window cladding to mimic the F-150, a closer inspection reveals trademark GM cues, like GMC’s six-sided grille and LED accent lighting and the dual rectangular exhaust outlets we’ve seen on other recent spyshots.
Sources say GM may be increasing the aluminum content on the truck, however we believe it will still employ a mixed-metals approach rather than Ford’s all-aluminum construction. The bed may remain steel, as GM has made a big deal of this in its recent ad campaign against the F-150 and one that’s not likely to be easily or quickly forgotten.
Beyond the mixed-metal construction and extensive use of LED lighting, little is definitively known about the new GM 1/2-tons, but we expect the usual incremental improvements in frame strength, fuel economy, towing and payload capacity, as well as new comfort and convenience features and electronics. Expect auto stop-start to migrate to the trucks, possibly in conjunction with a mild-hybrid system. Although we have no hard evidence, we believe the 2019 1/2-tons may offer an optional six-cylinder turbodiesel engine, to counter offerings from Ram and now Ford. We expect to see the full production version of the new trucks at the 2018 Detroit Auto Show.