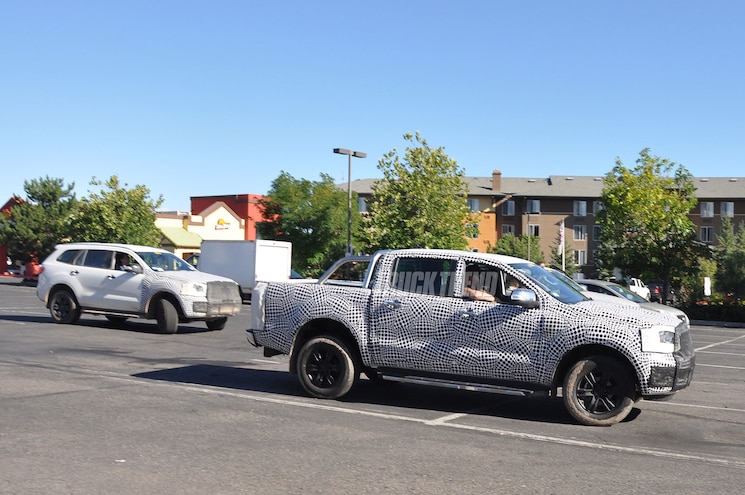 Spy photographers in Arizona spotted the 2019 Ford Ranger and 2020 Ford Bronco mule, two of the most anticipated vehicles in the company’s recent history. The pickup was spied in Wildtrak and Raptor forms, while the SUV was spotted wearing conventional Ford Everest bodywork, leading us to believe this is a powertrain or chassis mule, not an actual Bronco preview. 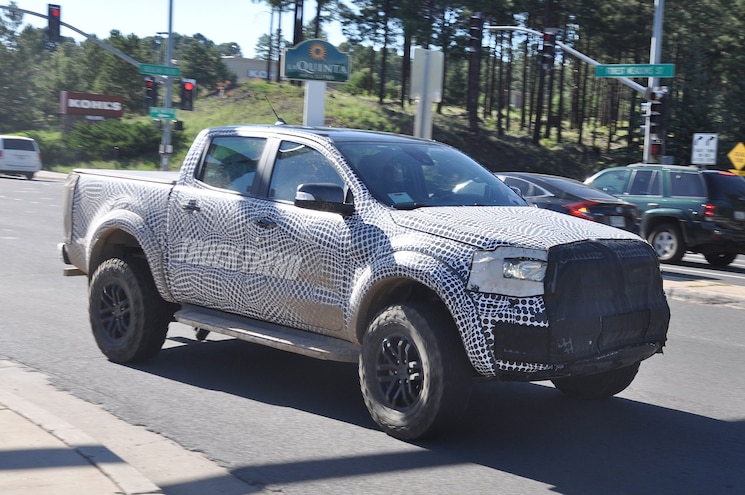 We’ve reported on the exciting, Colorado ZR2–rivaling Ford Ranger Raptor a bit before, but these photos provided by our spy photographer excite us nevertheless. Sporting massive, chunky tires mounted on the F-150 Raptor’s 17-inch wheels, the upcoming Raptor (expected for 2019 or 2020) has a brawny stance not unlike its Chevrolet counterpart. Bulging fender flares provide some coverage for the truck’s widened front and rear track.. 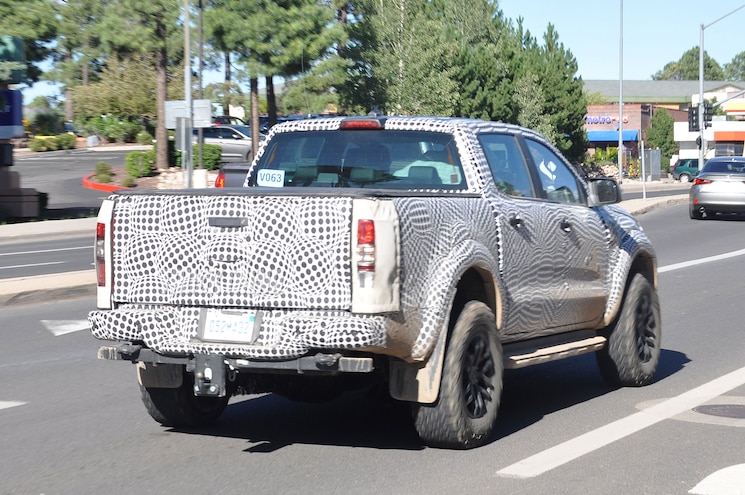 View Photo Gallery | 22 Photos
Photo 3/22   |   2019 Ford Ranger Raptor Rear Quarter 02
Seen in Flagstaff, the Ranger Raptor was evidently involved in some hot-weather off-road testing, as evidenced by the thick layer of silty mud found on the running boards and splash guards. Unfortunately, Ford’s paranoia-chic suspension camouflage is still on full display here, so we don’t have any more insight on what’s under the Raptor’s bolder, wider skin. Ford didn’t do anything to mask the massive, oval-shaped badge on the tailgate, almost as if they’re baiting the general public to speculate what kind of trick the company has up its sleeve.
Of note, our photographer reported this vehicle had apparently diesel-powered running gear, likely a 3.2L turbocharged I-5.

As it is in the U.S., XLT is Ford’s midlevel trim in other world markets, while Wildtrak takes the top Ranger slot (at least until the Raptor is made available globally). Spotted testing alongside a Ford Everest–bodied Bronco mule and the aforementioned Ranger Raptor, two SuperCrew pickups were spotted, one with XLT-spec wheels and the other wearing Wildtrak rollers. Each of the testers also wore bed-mounted style bars, which are a common sight on global Rangers. 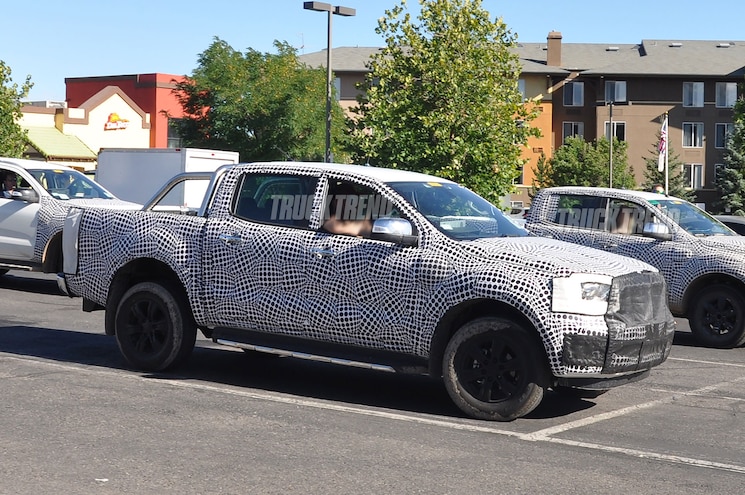 View Photo Gallery | 22 Photos
Photo 7/22   |   2019 Ford Ranger Wildtrak Front Quarter 02
All global Ranger SuperCrews ride on suspensions with the same ride height, making it hard to tell if these are 4x2 or 4x4 variants (the single-cab Ranger 4x2 is available with a cargo-friendly low-ish suspension or a “Hi-Rider” 4x4 imitation). However, both camouflaged Rangers were dusty and dirty, suggesting they’d been out doing the same off-road testing as the Raptor.
While the Raptor was probably running a turbodiesel powertrain, our photographer reported one of these trucks sounded distinctly like it had a turbocharged V-6, likely Ford’s 2.7L EcoBoost. Consider our interest decidedly piqued if Ford decides to offer a 325hp-plus engine in the midsize pickup.

Rest easy: Our photographer’s source all but promised that this vehicle is a mere mule for the 2020 Ford Bronco, not a preview of its styling. The powertrain that lurks under this anonymous global-market Ford Everest bodywork is reportedly all that will transfer to the Bronco when it hits our shores sometime in 2019. Not that we don’t like the Everest, which is a three-row family SUV with plenty of off-road capability, but we seriously hope the heritage SUV will come with heritage styling. 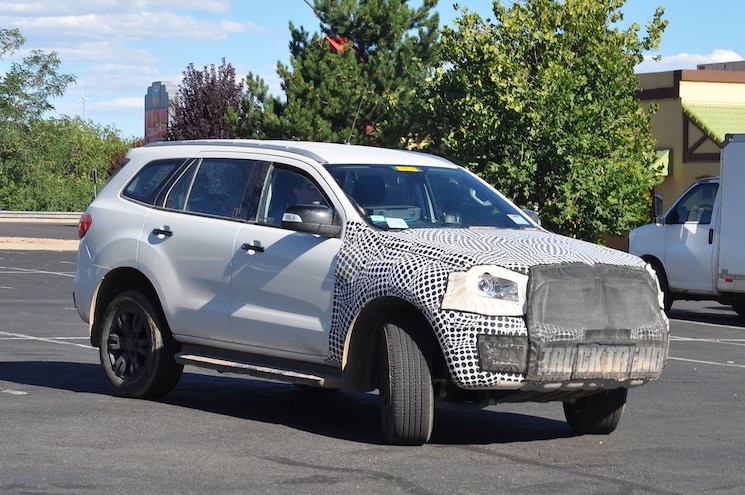 View Photo Gallery | 22 Photos
Photo 11/22   |   2020 Ford Bronco Everest Mule Front Quarter 01
The camouflaged front end hides conventional Everest styling, but under the hood of the production Bronco will be the same powertrains as the contemporary Ranger. The base engine could be a 2.0L EcoBoost I-4, with an optional 2.7L EcoBoost V-6 or 3.2L Power Stroke I-5 diesel available. We also expect a variety of trim levels and off-road options, possibly including a whole-hog Bronco Raptor. The mule here is wearing the same alloy wheels as the Ranger Wildtrak, and it’s missing the Ranger Raptor’s widened track and fender flares. That means we’re probably looking at a midlevel Bronc tester, presaging the ute that will be built alongside the Ranger in Michigan. 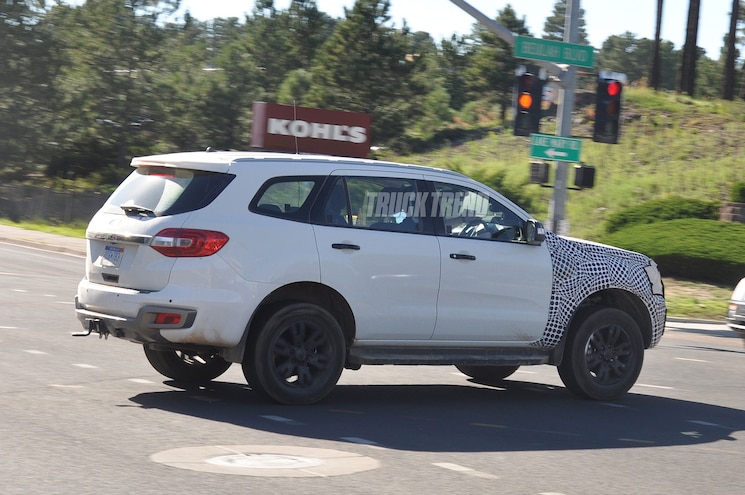 View Photo Gallery | 22 Photos
Photo 12/22   |   2020 Ford Bronco Everest Mule Rear Quarter 01
We’re still at least a year away from seeing a production version of the Ford Ranger or Bronco, so until then, we’ll just have to keep speculating. But we’re grateful to see these test vehicles out and about, as it gives us plenty of reason to daydream about our ideally spec’d Ford midsize trucks. We’ll be sure to keep our eyes peeled for more Ranger and Bronco mules till we get our hands on the real thing.
Source: SpiedBilde Photography 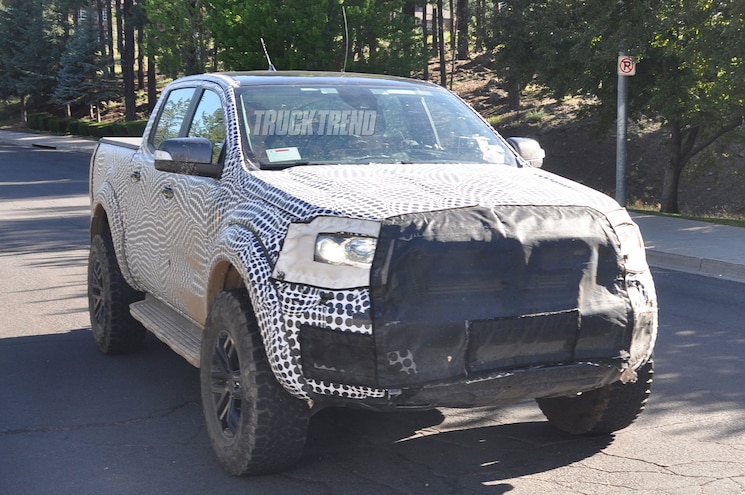