Air vs. Juice - Which is Better? 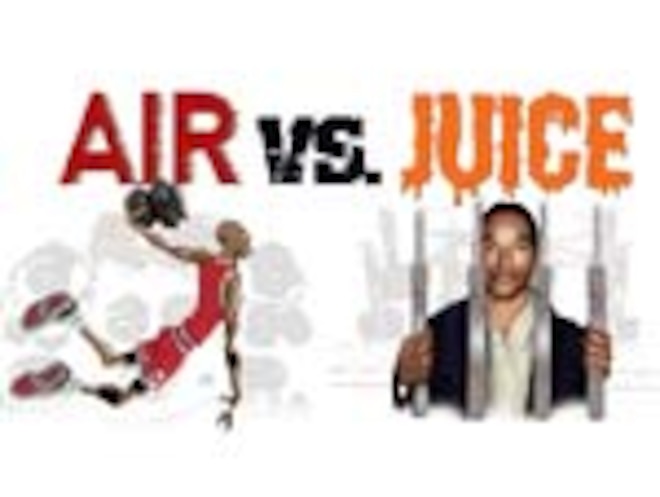 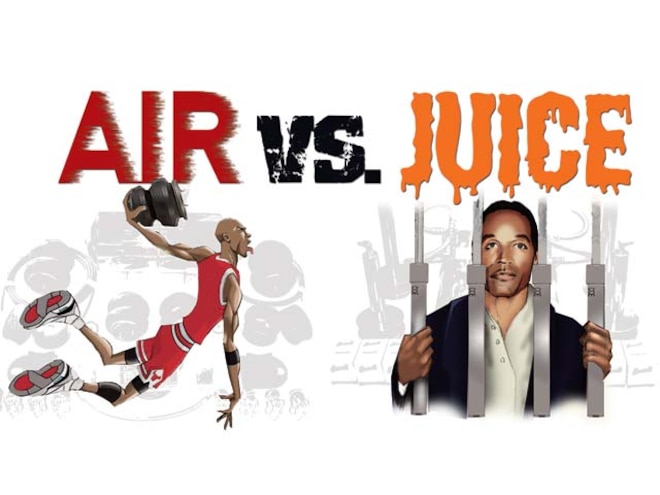 View Photo Gallery | 21 Photos
Photo 2/21   |   hydraulic And Airbag Custom Suspensions lead Art Z
OK, don't let the title of this verbal brawl sway you either way. Both forms of suspension have their ups and downs. Yes, hydraulics have their ups and we're about to show them to you. We ask you to clear your brain and start from scratch with some current info and myth-busting data. We feel a lot of mini-truckers will be quick to put hydraulics on blast, as they are more familiar with air. We are here to tell you, and show you, that air and juice both have their place in the mini-truck mecca. Keep in mind, we are addressing most of the pros and cons based upon the most common setups.
Air
Long the favorite of the average mini-trucker, the airbag is a staple of the mini-truck community. Airbags offer a good ride, and an even better ride when used with shocks and placed in the correct location to adequately compress the bag enough to get full suspension usage. 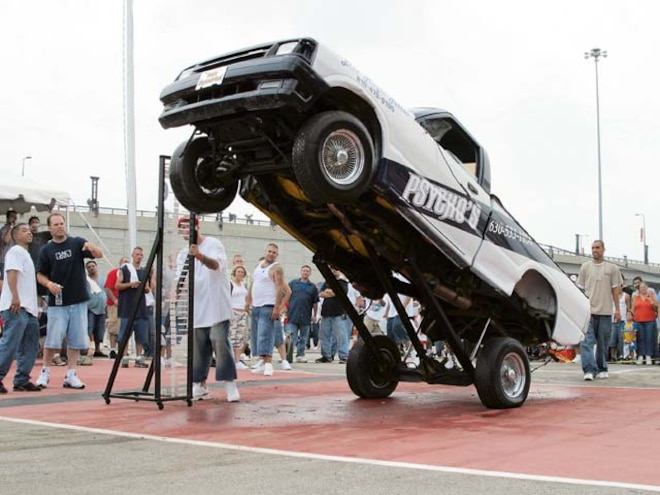 View Photo Gallery | 21 Photos
Photo 5/21   |   Mazda Pickup Front Drivers Side View Hopping
Juice
Hydraulics have been used on OEM vehicles since '55 and on lowriders since God knows when. They were the first form of adjustable suspension used on customs but took their direction more into the lowrider world. With the use of absurd coil springs, lowriders would make their vehicles hop to new heights and broken ball joints. 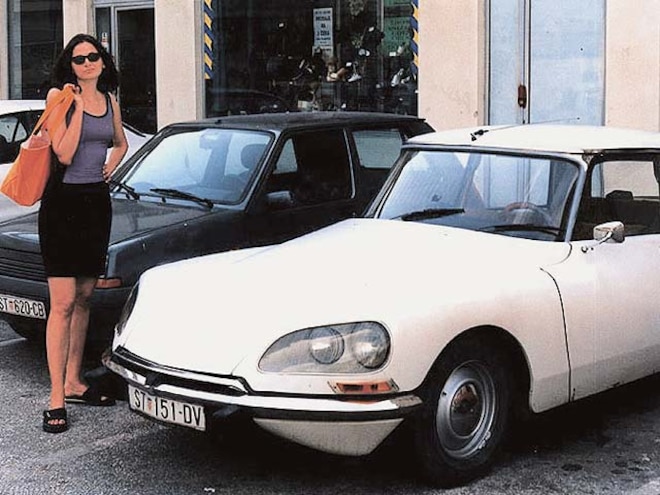 View Photo Gallery | 21 Photos
Photo 6/21   |   As you can see, hydros pimped women back in the day too.
Proof of reliability:
Hydraulic suspensions have been used in production vehicles such as the Citroen. In '55, Citroen's Traction Avant was presented to the automobile world with height-adjustable hydraulic suspension. The MGF roadster, Austin Rover, and Metro have all used hydragas suspension, which is similar to but a more unorthodox method of hydraulics. Also, everything from heavy machinery, amusement park rides, and tractors uses hydraulics.

View Photo Gallery | 21 Photos
Photo 7/21   |   hydraulic And Airbag Custom Suspensions air Gauge Z
Air Theory
An airbag naturally gives to provide suspension. The main key to a good ride in an air system would be to take the airbags' weight-handling capabilities into account and position them to get adequate pressure to make them act correctly. Add that with shocks and your ride should roll smoother than stock. In order to make an air system reliable, the most important and overlooked aspects would be keeping water out of the system, keeping the bags from rubbing anything, keeping air line isolated from heat, and running a heavy enough gauge of wire for your compressor.Airbag - The advantages of an airbag to a hydraulic cylinder is that it has a superior collapsed-to-lift ratio of up to four times as well as being able to act as a spring. The disadvantages are the diameter of the bag as well as the rubber's inability to handle constant rubbing, which would lead to a blowout.

Pros: Air stains are easily removed, air gauge gives you an idea of ride height, easier to set up for a decent ride.

Cons: Air leaks are harder to find, air tanks are not space savers, regular air tanks are low pressure and have to be constantly refilled, if you have nitrogen you have to take the bottle to be filled, air is loud.

View Photo Gallery | 21 Photos
Photo 12/21   |   hydraulic And Airbag Custom Suspensions lemans Car Z
Hydraulic Theory
In hydraulics, the misconception is that they ride horribly. Hydraulics are made to handle such extreme conditions that they are rated for thousands more pounds than an automobile could deliver. They are used in every commercial application known to man. A new high-tech hydraulic suspension has even been used by the Spanish company Creuat for a racecar for the 24 hours of Lemans, the most enduring race in the world. The problem is that they don't give whatsoever. So in order for a hydraulic system to ride smoothly, the key will be to build a functional suspension around it. In order to achieve this, springs, accumulators, and shocks would be used. For dependability, we'll show you the latest and greatest that CCE has to offer.

Cons: Hydraulic fluid costs money, oil stains, have to replace seals, you need to store multiple pumps and batteries, no gauge of height, batteries are heavy, batteries have to be charged often.

View Photo Gallery | 21 Photos
Photo 17/21   |   hydraulic And Airbag Custom Suspensions hydraulic Diagram Z
In the image here, the nitrogen gas is represented in red and the LHM fluid is represented in green. The fluid basically pushes the balloon and allows the fluid in the cylinder to give. This is the hydro-pneumatic equivalent to the spring being compressed and then rebounding. The pressure of the gas is the equivalent to the spring weight.

View Photo Gallery | 21 Photos
Photo 18/21   |   hydraulic And Airbag Custom Suspensions check Valve Z
Air System Durability Tips:
Make sure to run a complete air system, not just the basics; you'll regret it. This means, run check valves to make sure your truck doesn't air out when you don't want it to. Always run a water trap to keep moisture out of your system. (Moisture will ruin your system quicker than anything.) Be sure to route your lines intelligently, and if money permits it, hard-lining your system is rock solid.

View Photo Gallery | 21 Photos
Photo 19/21   |   hydraulic And Airbag Custom Suspensions water Separator Z
Air systems can tend to sway if you run only four solenoids; run eight for a complete system. Aluminum or ceramic-coated tanks are a good way to avoid rust in your system. Last but not least, for all you snow bunnies: If you're having problems with frozen valves, add air brake antifreeze. It helps to absorb condensation and fights corrosion in your system. It's similar to rubbing alcohol.

View Photo Gallery | 21 Photos
Photo 20/21   |   hydraulic And Airbag Custom Suspensions seals Diagram Z
Hydro System Durability Tips:
Not as many people are informed with the hydraulic innovations as of late. For example, CCE has new super cylinders that add a poly pack seal as well as a Teflon seal to accompany the standard dual O-ring setup. This is said to get you up to four times the use without blowing seals.

View Photo Gallery | 21 Photos
Photo 21/21   |   hydraulic And Airbag Custom Suspensions battery Charger Z
In order to stop your charging woes, get a Streetcharger, which charges your batteries as you drive. The same as air, you can hard-line your setup for the ultimate in cool and durability. Beware of used hydraulics! It seems that more than half of the people that have had bad experiences with hydraulics were involved with a used set of non-rebuilt hydraulics.

Diesel Power
Diesel Power
how to
1995 2WD F-350 Dualie Gets Leveled and A Front-End Upgrade
Age takes its toll on every vehicle, and miles just speed up the aging pr...
Bruce W. Smith – Oct 4, 2019
Truck Trend
Truck Trend
how to
ICON Vehicle Dynamics Ford Raptor Billet Control Arms and 3.0-inch Coilover Shocks
The Ford SVT Raptor was the first production pickup built to tackle the u...
Jason Gonderman – Oct 3, 2019
Truck Trend
Truck Trend
how to
Tech Install: 2002 Silverado 2500HD BDS Recoil Traction Bars
We’re all familiar with the concept of traction bars, or at least we sh...
Jason Gonderman – Oct 2, 2019
Truckin
Truckin
how to
Trail Ready Tundra: Part One
We don’t get to do a lot of Toyota tech around here. It’s not because we don’t want to. We lov...
Jeremy Cook – Oct 1, 2019
Join Our FREE Truck Trend Network Newsletter