There's More to it than Looks Alone 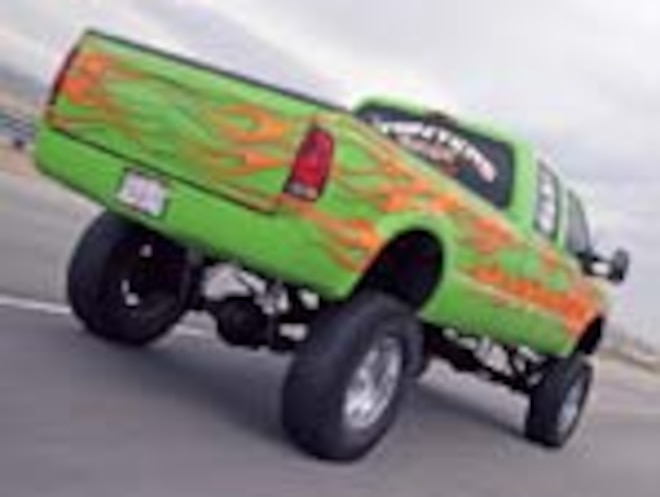 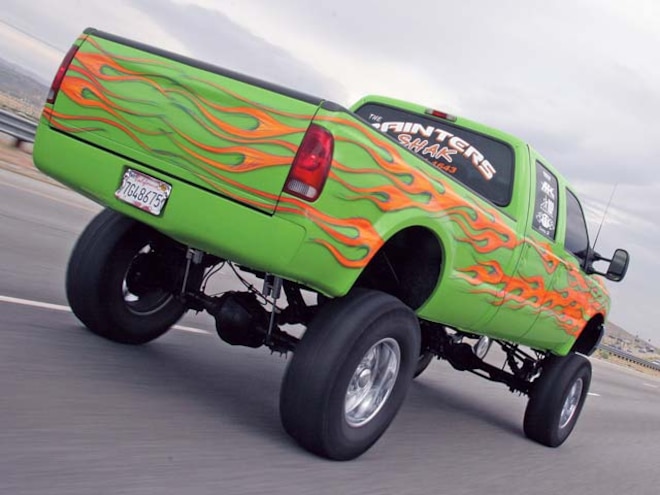 View Photo Gallery | 9 Photos
Photo 2/9   |   lifting Hows And Whys lifted Truck Running Shot
Lifted trucks definitely have a strong place among the custom truck owners. The added height over a stock or a lowered truck adds to their mystique and rousing desire for ownership. It would seem as if the higher you go, the more you and your lifted truck are noticed. Think of it like a skyscraper standing against a sea of suburban homes. This high-rise appearance makes these trucks rather difficult to miss. Adding flashy paint, some chrome, colorful powdercoating, and large diameter wheels and tires is a surefire way to make a billboard-sized statement on highways and byways. Despite all of the jokes about lifted truck owners overcompensating, the market for parts to lift trucks higher and higher is still skyrocketing.
We thought it would be interesting to delve into what a lifted truck could do to better your life. Are there any redeeming values to owning a lifted truck? Does 12 inches of lift and massive rubber make anything easier to do when compared to stock or lowered vehicles? Let's take a look and find some answers to these question, about adding height to your truck. 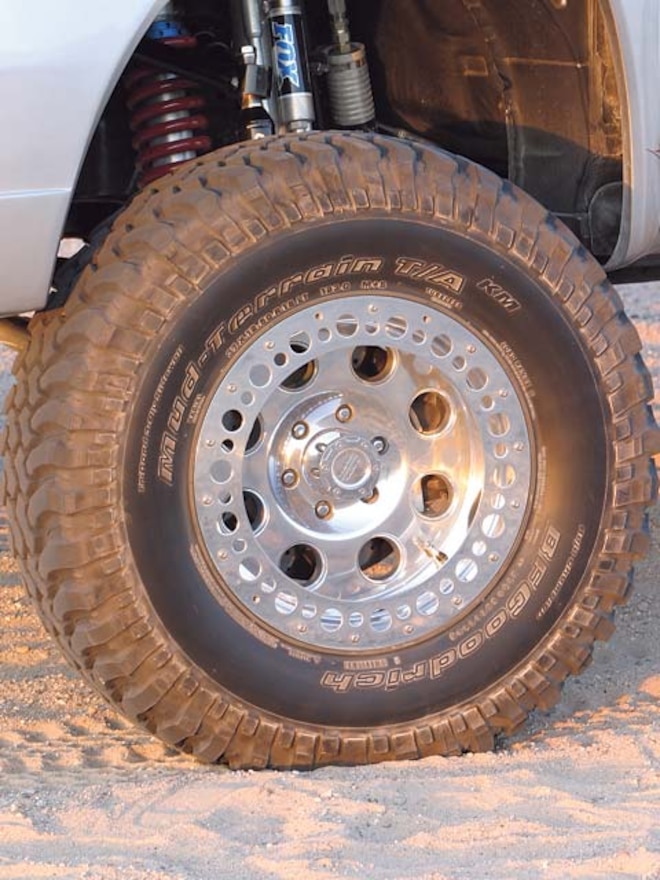 View Photo Gallery | 9 Photos
Photo 3/9   |   These 37-inch tires on 18-inch wheels will be able to be driven over most road hazards without much worry about wheel damage, thanks to a hefty 9-1/2 inches of tire sidewall. 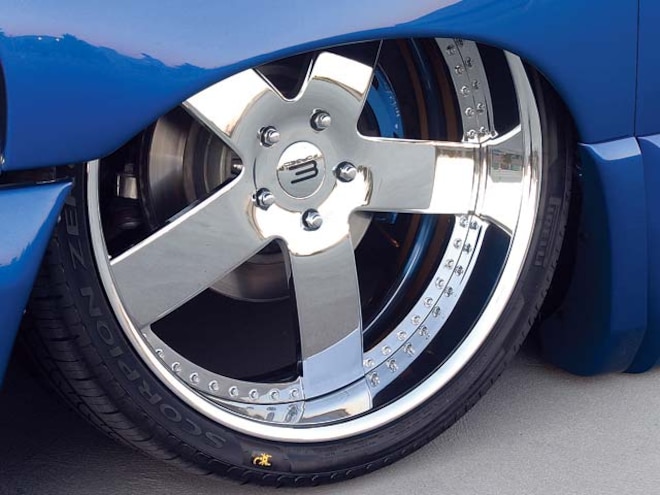 View Photo Gallery | 9 Photos
Photo 4/9   |   Skinny sidewall heights will dictate your driving speed and style. You will obviously not be driving without worry when it comes to obstacles such as railroad tracks, driveways, and road conditions.
Daily Driving
Roads and highways are not in the best shape in many areas. We have been around the country and seen the good, the bad, and the downright ugly when it comes to territorial concrete passages. Don't think that we're spoiled children here in Southern California and our freeways are made of glass, because it just isn't so. This is where a lifted truck shines. Rolling on higher-profile aggressive rubber goes a long way in absorbing the irregularities, undulations, and potholes that exist on every road in America. How many lifted trucks have you seen that bent a rim on a pothole driving down the road? We came up with the same answer you did. A 35-inch tire is pretty standard on a lifted truck these days, and even with a large diameter wheel, it has plenty of sidewall. We figured that a 35-inch tall tire with a 20-inch wheel has 7-1/2 inches of rubber on each side of the rim (35 minus 20 equals 15. 15 divided by 2 equals 7-1/2). That much sidewall goes through bumps with aplomb, especially when compared to a 265/30R22 tire with its diminutive 3-inch sidewall. Now, which tire would you rather take across a set of messed-up railroad tracks at 45 mph?
Towing
Traveling while towing can range from a barely noticeable day on the road to a complete nightmare. Not all of us tow anything, but for those of us who do, we believe a lifted truck is better than a lowered truck. Of course, the size and weight of the trailer could play the devil's advocate in the equation, but we based our reason on a fairly general towing experience. Now, you could pull a 4x6-ft utility trailer with a Honda Accord, but that doesn't mean it will also pull a car hauler trailer, or a 30-ft boat, or even a loaded toy hauler. Could a stock or lowered truck do all of that? With the right truck, sure, but a lifted truck will afford a better safety margin and weight advantage against the offending load; rather than trying to remove your head from your shoulders at the first hint of trouble.
Before you get the wrong picture, keep in mind we are still referring to mildly lifted trucks. If you are trying to tow a fully loaded toy hauler with an 18-inch lifted 1/2-ton 2WD on 40s, then by all means, do it when people are nowhere near you. You are going to be a problem farther down the road. Do you still think we're not spinning through all of the gears? Maybe you could understand the bigger truck as a better towing vehicle by comparing the situation to a big rig. The greater size and weight of the rig can accommodate and handle much larger loads and weights without becoming a swerving and dangerous menace on the roads. 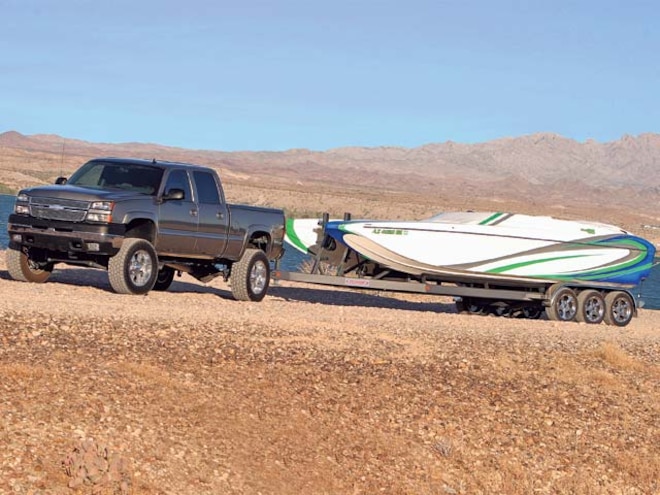 View Photo Gallery | 9 Photos
Photo 5/9   |   lifting Hows And Whys chevrolet Truck Pulling Boat
On the issue of weights, a 26- to 28-ft boat and trailer combination weighs in the neighborhood of 6,500 lbs. Once again, a standard cab shortbed 2WD truck could pull it, but it would be outweighed by almost twice its own weight. A mildly lifted Crew Cab 4x4 truck would put that same experience at a near 1:1 weight ratio, and would be a much safer trailer-pulling vehicle. 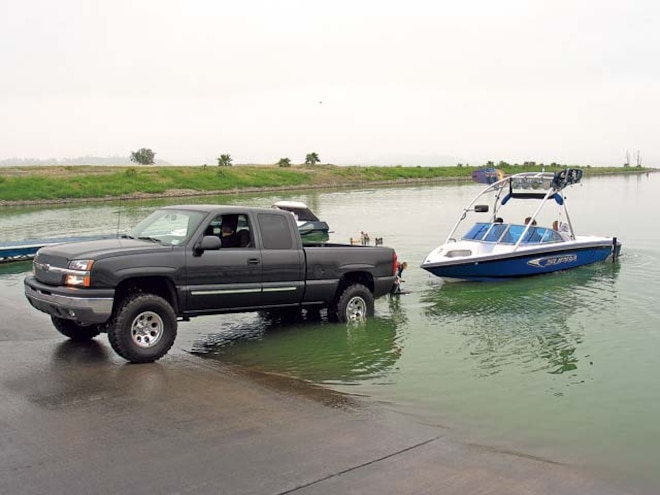 View Photo Gallery | 9 Photos
Photo 6/9   |   lifting Hows And Whys chevrolet Silverado Pulling Boat
With its added height, this Chevy is able to back a boat into the water and stay dry. Take a closer look to see that about 90-percent of the truck's wheelbase is wet. Imagine this same scenario with a standard cab shortbed pickup lowered 4/6 with 20-inch wheels. You would be swimming to get the boat far enough in the water to get it off of the trailer.
The View
Peering out across the hood of a lifted truck affords the driver a much better view of most situations. Low-profile economy cruisers can cause an altered forward view, but this is not so in a lifted truck. With the truck's inherently taller design, adding a suspension lift to the equation allows the driver and passenger alike a much clearer view of the road ahead and better ability to avoid a possible hazard, or slowing traffic farther ahead. Inclement weather can also be substantially less troublesome riding higher up. When the weather turns for the worse, and rain is pouring down heavily, most roads simply do not allow the constant deluge of water to run off with haste. As the traffic travels through the water lying on the road, the vehicles' tires pick up the water and toss it off the treads, due to centrifugal force. This creates a fog of water behind the vehicle and additional water on your windshield. Once again, a lifted truck situates the passenger cabin higher and away from the flung water. With less water to contend with, the driver of the lifted vehicle can drive more safely. 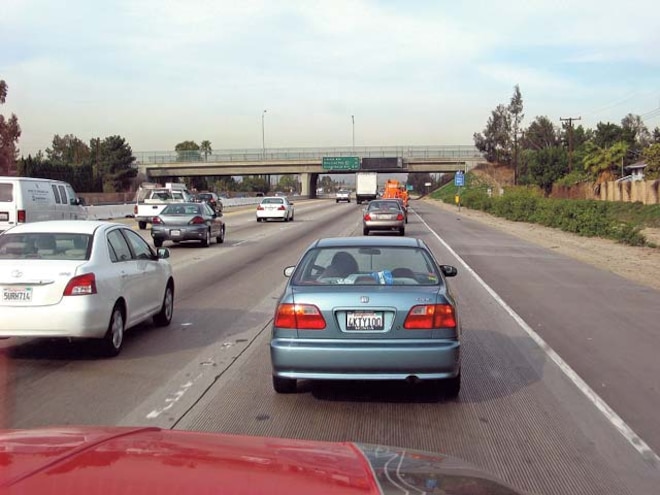 View Photo Gallery | 9 Photos
Photo 7/9   |   lifting Hows And Whys freeway Driving
Peering through the windshield of our own lifted project F-150, you get a good feeling of what the rest of the world can't see. Driving in this vehicle offers a fairly solid look down one of our local freeways over the roofs of the scattered cars. If a problem were to exist, it could be identified earlier and reacted to much sooner in a higher-riding truck. 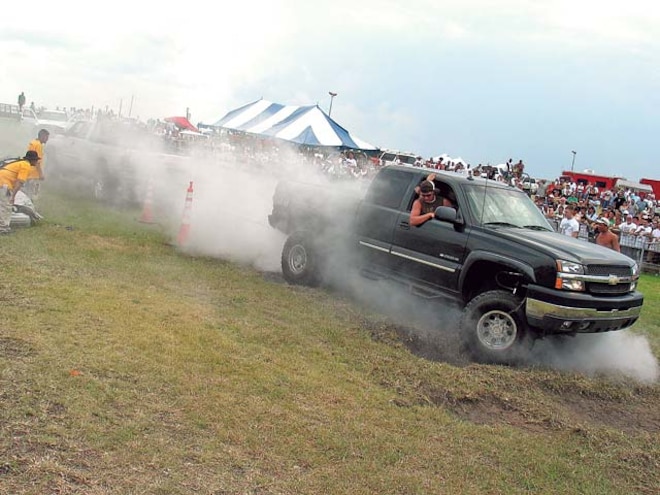 View Photo Gallery | 9 Photos
Photo 8/9   |   Try this truck-to-truck tug-o-war on the street with a less manly vehicle and you can kiss some parts goodbye. This kind of entertainment can only come from the heavy-duty lifted 4x4 vehicles.
Obstacles
Almost a moot point to consider when operating a lifted truck is its ability to maneuver over obstacles or terrain that would damage a stock truck and wouldn't even be thinkable for a lowered vehicle. Just about anyone with a lowered truck has encountered, or knows someone who has encountered, a bump, driveway, speed bump, or other obstacle that brought forward progress to a metal-grinding halt. Embarrassment aside, getting shipwrecked in a lowered truck is a common problem and one that can usually be overcome with some kind of adjustable suspension like airbags or hydraulics. However, becoming unstuck is not guaranteed. Now enter the lifted counterpart, and those same problems become nothing more than a pesky hiccup that can be driven over without ever slowing down. Driving off-road is a perfect example of the merits of increased ground clearance. Whoops, rocks, and ruts do damaging things when contacting portions of your truck while bashing away through the dirt. A stock truck has its limits, but the lifted suspension will extend those limits, as well as the driver's needs, and the entertainment choices.
Owning and driving lifted trucks opens up a few more doors than being in a lowered truck. We applaud their go-anywhere capability and feel that no single style, lifted or lowered, is better than the other in terms of which to pick. So, if you own a lifted truck, rest assured you have a truck with more than ample capabilities to get you through everything from driving to your local market to scaling hills. At the very least, you could drive over a curb without incident. Be sure to take the proper safety precautions, and have the right performance and safety enhancing items installed, should you decide that driving high is the way to fly. 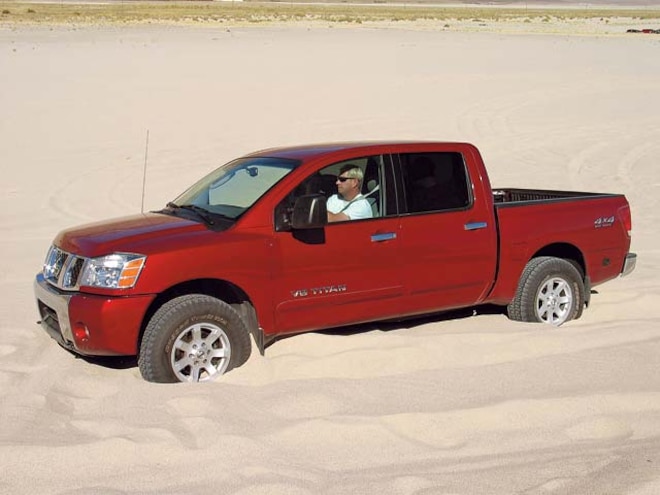 View Photo Gallery | 9 Photos
Photo 9/9   |   lifting Hows And Whys 2007 Nissan Titan
Although this Titan test vehicle is stuck in the sand, it did manage to get moving again with little digging. If this same truck had a minimal 6-inch suspension lift and wider tires, more than likely, it would not have gotten stuck to begin with. Once the tires began to lose traction, the truck was immobilized due to the frame touching under the front suspension and adding more drag. With a lift and larger tires, the frame would not have come into play.

Diesel Power
Diesel Power
how to
1995 2WD F-350 Dualie Gets Leveled and A Front-End Upgrade
Age takes its toll on every vehicle, and miles just speed up the aging pr...
Bruce W. Smith – Oct 4, 2019
Truck Trend
Truck Trend
how to
ICON Vehicle Dynamics Ford Raptor Billet Control Arms and 3.0-inch Coilover Shocks
The Ford SVT Raptor was the first production pickup built to tackle the u...
Jason Gonderman – Oct 3, 2019
Truck Trend
Truck Trend
how to
Tech Install: 2002 Silverado 2500HD BDS Recoil Traction Bars
We’re all familiar with the concept of traction bars, or at least we sh...
Jason Gonderman – Oct 2, 2019
Truckin
Truckin
how to
Trail Ready Tundra: Part One
We don’t get to do a lot of Toyota tech around here. It’s not because we don’t want to. We lov...
Jeremy Cook – Oct 1, 2019
Join Our FREE Truck Trend Network Newsletter